Animal welfare is always a concern for British travellers and, with so many of us visiting Thailand every year, the care of captive elephants is an issue that’s impossible to ignore.

Indeed ABTA (the Association of British Travel Agents) recently issued a directive advising against all forms of contact, including riding and bathing and only allowing feeding where there’s a barrier. Of course, this is only advice and I wanted to visit Thailand to see how it’s working out on the ground.

Elephants have been part of Thailand’s history and culture for centuries and were used in warfare, transport and, until recently, in the forestry industry. In 1989, due to environmental concerns, the government banned all logging and suddenly thousands of animals, along with their mahouts were out of work. It was impossible to release them into the wild and, since they eat around 250kgs a day, at a cost of £1000 a month, then the only way of keeping them alive was to turn to tourism. 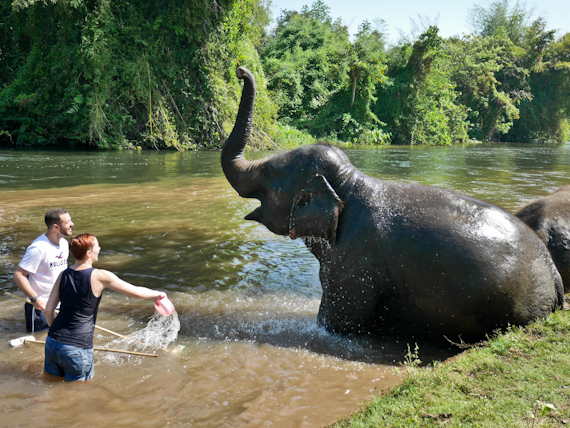 Driving around three hours west from Bangkok to Kanchanaburi I visit Elephants World founded in 2008 by a Thai vet and his wife. They started with three and now have 22 animals here. It’s a beautiful spacious site, on the banks of the River Kwai, and the care feels good. Feeding is allowed behind a barrier from specially constructed walkways and riding is definitely out. However, I’m surprised to see that they allow tourists to join the elephants for their morning bath in the river, although numbers are kept low. 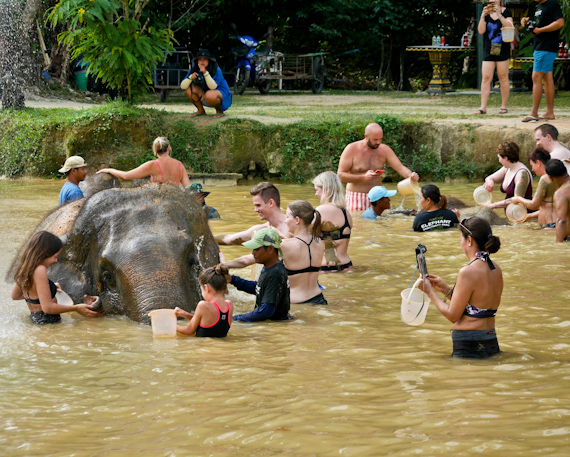 Flying south brings me to the island of Phuket, where a number of centres have been established for those tourists seeking a respite from sun and sand. It’s here where I hear terrible stories of animals being shackled by the side of the road, offering rides in the midday sun. Thankfully Green Elephant Sanctuary Park doesn’t offer riding, but it does cater for large groups. There are 14 elephants, including a baby born here and feeding directly is allowed, as is bathing. I’m concerned to see a handful of animals, crowded by around 20 tourists in a tiny pool, not least for health and safety. 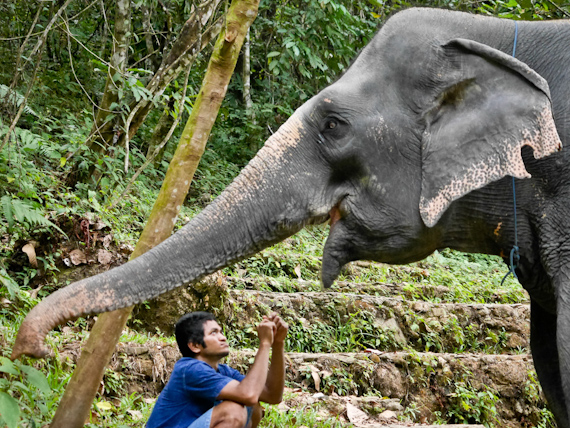 Around two hours north is Phang Nga Elephant Park, opened in 2015, which now has just nine elephants. It’s on the edge of a stunning fertile forest, and there seems to be a strong bond between the mahouts and their charges. I get to make nutrition balls to feed the elephants directly then walk alongside them up a rough track. Since groups are limited to 18, this is an opportunity to really get close and spend time with these majestic animals. When we get back, I’m saddened to see that they also encourage bathing, although with much smaller numbers than in Phuket. 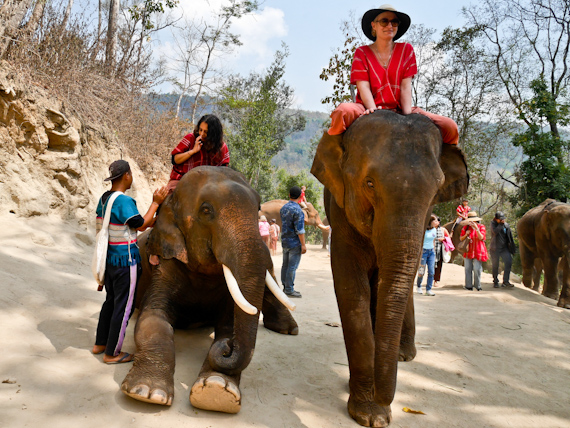 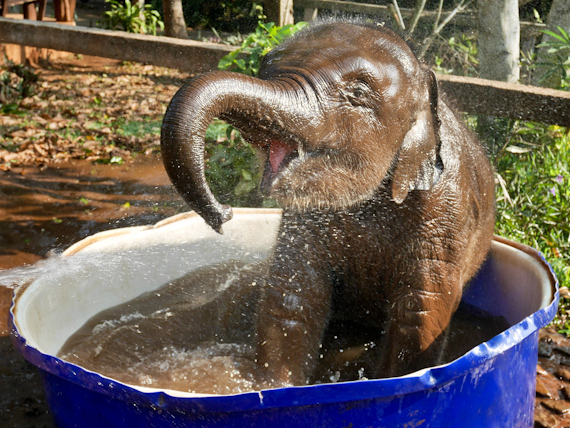 Then I fly to Chang Mai, in the north, which is home to the largest number of domestic elephants in the country. Less than an hour’s drive to the west is Patara Elephant Farm which focuses on breeding. They’ve had 44 babies born here and the latest is only four months old. Pat, the Thai owner gives us a rundown about elephant healthcare and tells us about his Elephant Owner for a Day programme. It all sounds fine until I learn that you not only get to wash your animal in the river but also learn how to ride on its neck and give spoken commands. 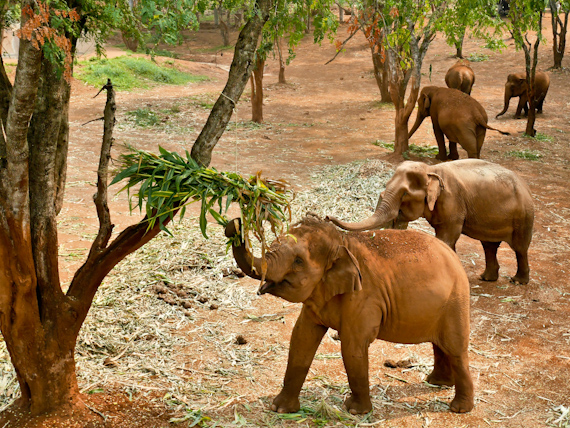 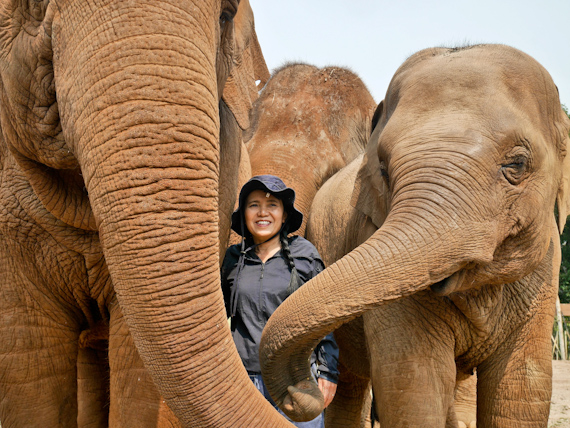 60 km outside Chang Mai is Elephant Nature Park, an animal welfare delight where no contact is allowed at all. You view the elephants from a distance on raised walkways and it gives you the impression that you’re seeing them in the wild. Of course, they’re still confined to an enclosure at night, obeying Thai law to prevent them devastating farmland, and the males are kept separate from the females.  Interestingly the charismatic founder, Lek Chailert, is quite happy to interact with the animals, throwing herself dangerously among their legs, but there’s no doubting her commitment. 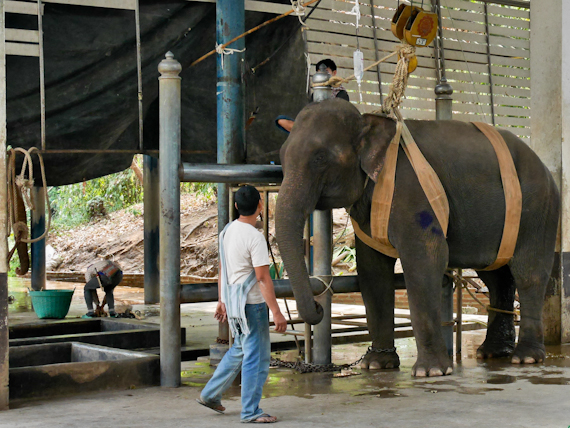 Finally, I visit the Thai Elephant Conservation Center in Lampang, run by the government, which has the world’s first elephant hospital. They treat weak, sick and injured elephants from all over the country and also have a mobile clinic. I see two mothers undergoing treatment after emergency caesareans. Their babies grew too large in the womb, probably a result of feeding them too much fruit, and both died.

There’s no doubt that Thailand takes elephant welfare seriously and I meet a number of experts, including researchers from Chang Mai University, at a special conference at Lampang. There’s universal agreement that it’s well-nigh impossible to release captive elephants back in the wild, not least because much of their natural habitat has disappeared. Babies should not be separated from mothers and bathing and riding should not be encouraged. Feeding is probably OK so long as they get a decent diet. 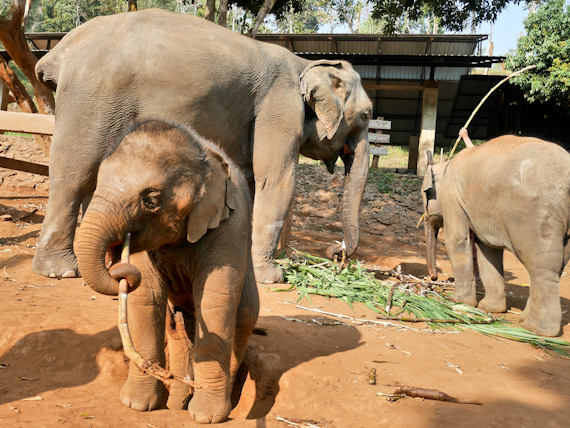 I’ve been impressed with many of the facilities I’ve visited and the progress they’ve made with welfare issues. There’s no doubt that rogue camps still exist and should be boycotted so they go out of business. However, what’s sorely lacking is a directory of all the centres so tourists can make an informed choice. Always ask your tour operator or travel agency about welfare standards before taking one of their excursions.

A number of elephant centres call themselves sanctuaries but there are currently no agreed standards and sometimes the word is added as a cynical marketing ploy.

TripReporter has also visited the Anantara Elephant Camp in Chang Rai which provides elephants with free-roaming throughout its private land. Mahouts are incentivised with an income to donate their elephants to the camp.

Thai Airways flies direct to Bangkok from London Heathrow and then on to Phuket and Chang Mai.