A 70s-style bar awash in greenery portrays The Jones Family Project as a probable purveyor of right-on clean eating.   But appearances deceive; huge hunks of prime rib, rumps of hoggett and primeval pork tomahawks are what drive  traffic to this serious Shoreditch steakhouse after sundown.
What lies beneath the scrubbed pine tables and trees which make the airy ground floor such a charming daytime destination is a plusher,  less playful – and, till the buzz rises late into the night, less intimate – room furnished with the comfy upholstered seats which are the first requisite for a lengthy session of meat consumption.
With The Ginger Pig as supplier and Josper grill as secret weapon, this is primarily a palace for carnivores, but pescatarians could be placated with cod, salmon or a plate of signature salt and pepper squid garnished with pickled watermelon chunks for a sumptuous texture contrast.   There’s also a spicy Cornish crab salad, but  dyed-in the-wool carnivores can precede meat with more meat; tenderly melting pig cheeks are a favourite. 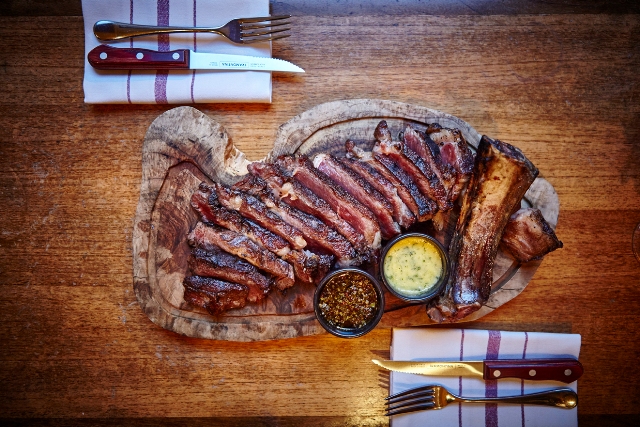 Our shared kilo of bone-in prime rib, a top choice narrowly beating the flavourful over-wintered lamb known as hoggett, was served perfectly rare as ordered.  It was pre-sliced for convenience and presented on a board, topped with the bone I would personally have preferred to get served with meat still attached to chew off it like the cave-woman I am.
Top-class meat deserves perfect potatoes, and The Jones Family Project does not disappoint.  Triple cooked chips look ordinary but prove divinely crisp on the outside and tender within.   Croquettes flavoured with Godminster cheese are also wickedly good, as are the truffled dauphinois, beside which truffled mac’n’cheese seems superfluous, though a succulent choice for vegetarians in the party.   Leaf spinach was perfectly cooked, but mushrooms, always so good with steak, were missing from the menu.
Charging extra for sauces has been a criticism in the past, but excellent green peppercorn gravy is worth every penny.   More to our taste than the intensely reduced red wine jus with a Marmite consistency and slightly vinegary Bearnaise, but creamed horseradish strong enough to clean out your sinuses is another great accompaniment. 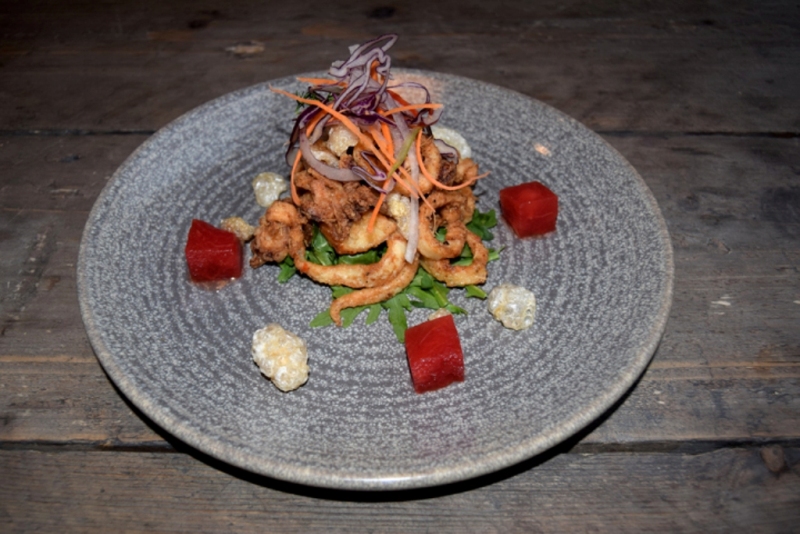 We shouldn’t have had room for pudding, but couldn’t resist a light, not overly sweet coconut mousse garnished with mango coulis and a deconstructed lemon meringue pie(chef has clearly watched Massimo Bottura, whose restaurant tops the World’s 50 Best, recreating the
lemon pie he accidentally dropped in his kitchen and then made his signature dessert, re-smashed to smithereens to order).
Wanting a great wine by the glass, we were delighted to find a J. Lohr cabernet sauvignon from central California on the list; it would be hard to find a better partner for the beef, although there are dozens of choices.    Cocktails are as inventive as they need to be when Hawksmoor is your close competition; we enjoyed a Saffron Sour with a vodka base and a Lost Negroni made with an inventive mix of home-made vermouths.
Service is friendly and efficient, and one consolation of being on the grubby outer edge of Shoreditch is that Old Street station is a mere three-minute stroll away.   The other is that the restaurant sits on the corner of Rivington Street, perfect for an after-dinner stroll to admire East London’s most inventive street art.

Tell me more about The Jones Family Project