An 1885 bathhouse off a charmless Paris boulevard may seem an unlikely vehicle for one of the city’s most desirable boutique hotels. But Johnny Depp and his cohorts have pulling power, and the too cool for school crowd cavorted for years in the basement of Les Bains when it was a hip nightclub.The club remains, but closed for four years after an ill-advised alteration made the building unsound. During that time, charismatic owner Jean-Pierre Marois decided to convert the apartments and offices which once occupied the upper floors into 39 guest rooms and create a talking-point restaurant and bar on the ground floor.
His vision paid off – within months of Les Bains reopening in March 2015 it had won prestigious European Hotel Design awards for both its rooms and its watering holes, as well as taking the overall prize for hotel design of the year. And the location doesn’t seem too shabby when you realise it’s just a five-minute stroll from the Pompidou.
The wow factor kicks in as soon as you pass through the unreconstructed Victorian reception area and hit the spacecraft of a restaurant – a futuristic yet elegant design which might have been created with a 21st century Napoleon in mind. 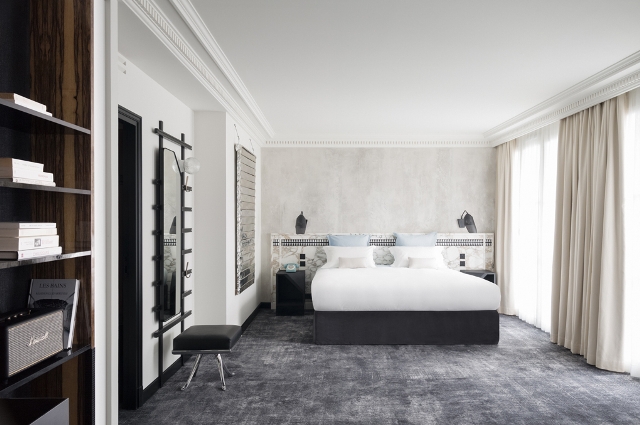 The rooms are more low key, subdued almost, but spacious and very comfortable. Banquettes arranged round an in-room cafe table make a useful place to log into the free wi-fi, and supremely comfortable beds and furnished with cosy Descamps linens. Large bathrooms reference the old bathhouse with their industrial Metro-style tiles, but offer today’s traveller the rainfall showerhead and the posh toiletries they expect(at les Bains, these are by Labo). The only niggle is too-low lighting, which makes it difficult to read the art books placed in the rooms for guests’ delectation.
Only the austere, almost forbidding exterior, the fringed velvet jackets of female reception staff and the genteel Chinese lounge in which guests are invited to pour themselves drinks from an honesty bar, refer back to the building’s 19th century heritage. Everything else is tout moderne, down to male staff with trendy haircuts who get to wear tight silver-grey school V-necks – tres Paris.
On my visit, one of those lads slightly let the place down with his attitude, but it’s not an attitude fostered by highly professional management.
Prices reflect the coolth but undercut more traditional five-stars, and you won’t find a more central location in Paris, on a direct bus line to the Gare du Nord and an easy stroll from les Halles and Chatelet, with its cluster of Metro lines. And there’s always the hope, however slim, of bumping into Johnny Depp on his way to boogie – or a swim in the symbolic pool which has been left in the club in hommage to the old baths where Marcel Proust was the cool customer of the times.

Tell me more about Les Bains

Getting there:  Eurostar serves Paris from London, Ebbsfleet and Ashford from £29 one way.