It’s just what you hope for when you book a five-star hotel in Tuscany.   A 12th century castle adapted for modern comforts with a Michelin-starred restaurant to boot.    Castello del Nero offers all this, plus a world-class ESPA spa and a rustic taverna where dining is actually more enjoyable than in the formal room next door.

The Castello, in which a wealth of original features including beams and old brick floors have been preserved, is also ideally situated in the heart of Chiantishire, equidistant between its two great urban offerings, Florence and Siena.   And only 10 minutes’ drive from the favourite tourist village of San Gimignano, with its charismatic mediaeval Tuscan towers.
The hotel itself is secluded, with sweeping views of Tuscan hills, poplar and cypress trees, the most expansive vistas at the back. 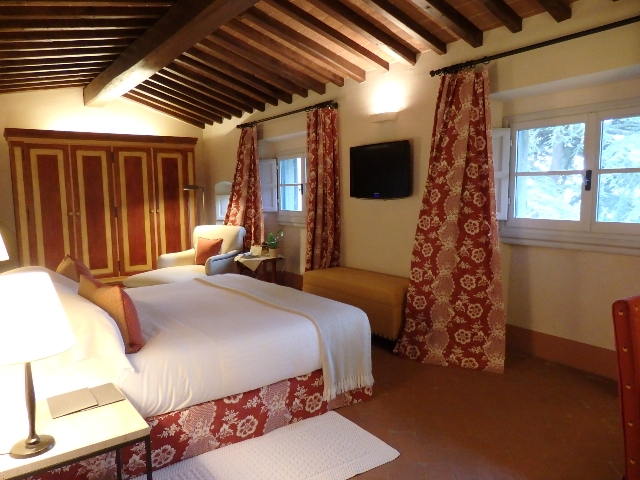 But I loved my room overlooking the park-like garden, complete with sculptures, at the front, richly-upholstered with a huge bathroom and a wealth of beams.   The expected oversized towels and fluffy robes were complemented by a couple of unexpected contemporary attributes – free wi-fi and a pre-installed universal adaptor.
A fine  breakfast featuring local cheeses, charcuterie, artisanal bread and freshly squeezed juices  is served in La Torre, where inventive but slightly fussy Michelin-starred dinners are also served with great formality. La Taverna offers superb rustic fare in a more relaxed setting for family meals, and a huge terrace overlooking the hills serves both restaurants.
The Castello, which produces its own wine and olive oil, overlooks Antinori, known for its super-Tuscans, and special packages offer a meal and visit of this legendary wine estate. But given the superb spa, with its mild sauna and hydrotherapy pool overlooking the hills, and the large outdoor swimming pool, you may never want to leave the premises.