It’s not only the paintings shooting off fireworks at the new blockbuster show Van Gogh and Britain at the original Tate London but the spicy, colourful food which informed the artist’s life in all the places he made home.

From the pickled herring of his native Holland to the ham hock with egg and peas of his teaching years in Kent to the apricots and other sunshine foods of Provence, where he ended his days, head chef Alfio Laudani’s Van Gogh-related menu at Tate Britain has them all. And the special dishes for a menu running throughout the exhibition are painted on the plate in vivid hues the artist would have found a feast for the eyes as well as the tastebuds. 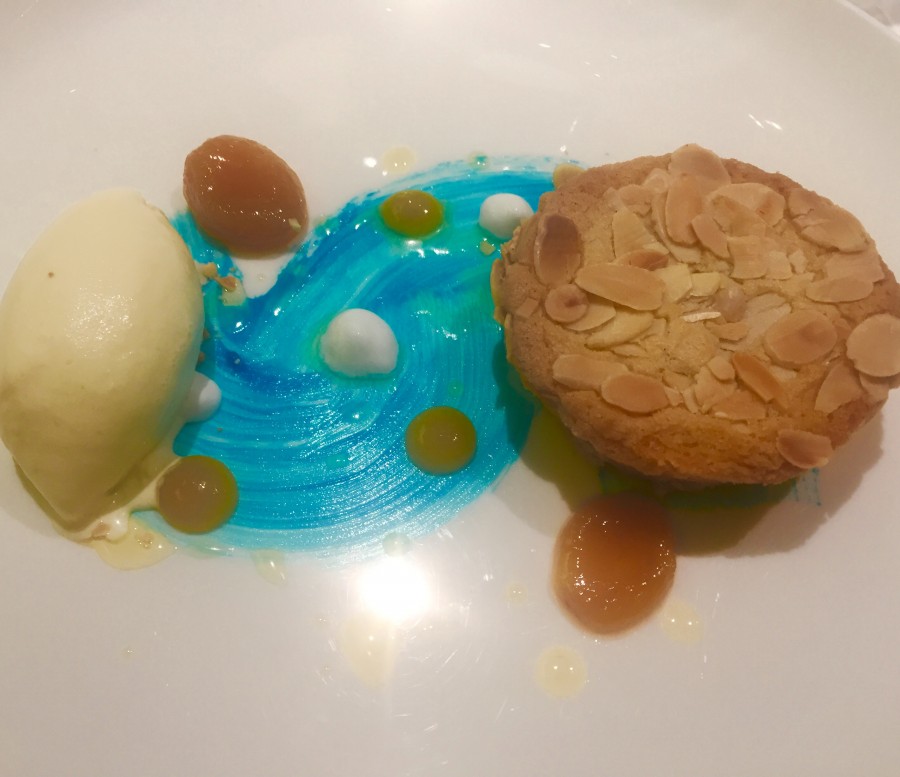 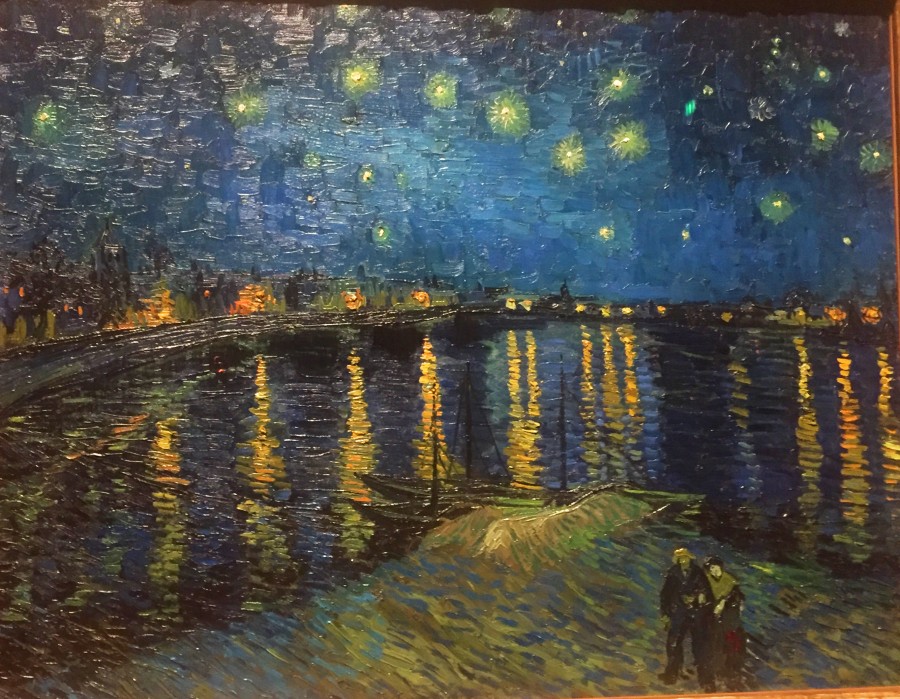 Take the midnight blue brushstrokes which provide the backdrop to a golden almond tart; the plate evokes the show’s hero painting, Starry Night Over the Rhone.   Van Gogh’s relationship with the mind-altering liqueur is exploited to the full in this dish, bound to be the most popular course of a special menu which can be enjoyed in its entirety or punctuated with other dishes from the spring-summer a la carte.

While James Whistler’s nocturnes intrigued and influenced Van Gogh, the impoverished Dutch painter could never have afforded to eat in the posh room named for the British artist who was no relation. The Rex Whistler Restaurant was dubbed, on opening nearly a century ago, “the most amusing room in Europe”, thanks to its specially commissioned mural The Expedition in Pursuit of Rare Meats.  Far from the kind of gory interpretation Francis Bacon, also featured in this exhibition, might have depicted,  Whistler chose to clothe the room in pastoral scenes, giving it a viridian aura reminiscent of a London gentlemen’s club.   White linen tablecloths and napkins bring a rare touch of lunchtime luxury to gallery dining and the sourdough and soda bread promise a serious approach to food. 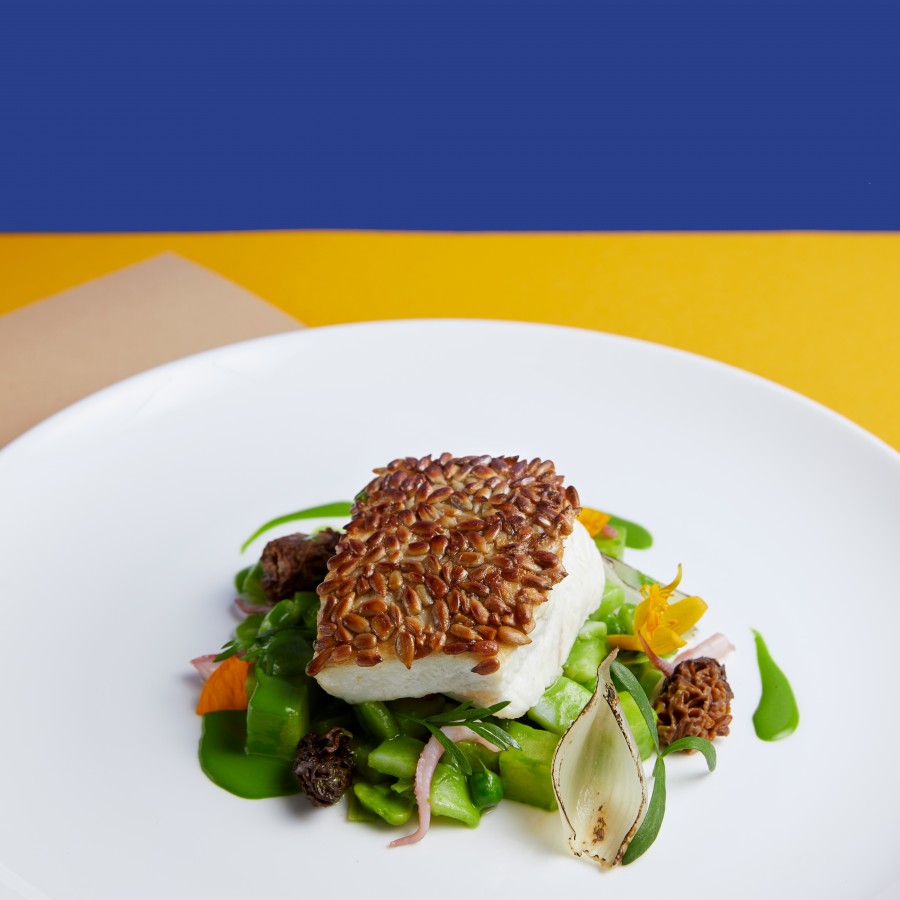 Cornish crab would probably also have been beyond Vincent – a shame, given the quality of Laudani’s devilled crab cakes with basil mayonnaise – but he would surely have been able to afford the ham hock starter from the special selection, albeit without the finishing touches of black truffle and caviar with which they’re presented at Tate Britain.  And he would likely have made a main course of the piquantly spiced steak tartare which is a star of the a la carte menu.

With starters as substantial as these and priced accordingly at £14-15, you don’t need mains, but the halibut “Sunflower” (£22) is worth ordering just to admire the artistic sunflower-seed crusting paying homage to Vincent’s favourite bloom.  Another artistic as well as tasty creation is the slow cooked pork belly adorned with a single, succulent Scottish langoustine in a pool or bisque(£23.50), although only the healthiest appetites will be able to do justice to a big plateful of Farmison’s Swaledale lamb saddle with Jersey Royals and wild garlic (£28). 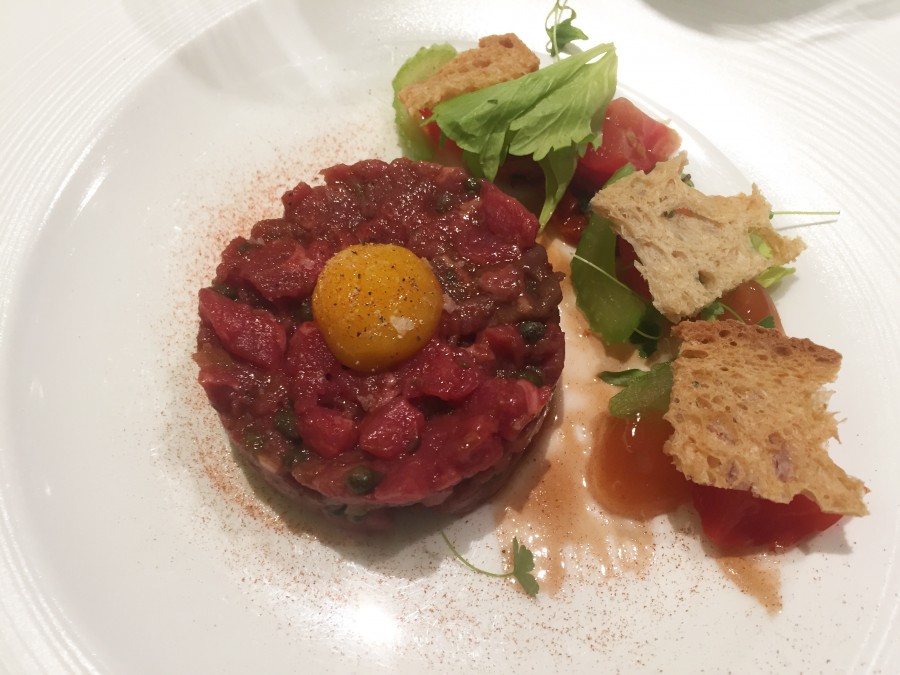 For pudding, it has to be the Gevulde Koek – that almond cake with apricots and absinthe ice-cream, although the Blackberry & Beetroot Eton Mess delivers an equal burst of vivid colour.   One can only suspect Laudani may have been referencing Vincent’s madness in a strange sweet salad of fennel, carrots and sweet potato served with olive oil jelly, black olive ice-cream and basil – or perhaps he was addressing the segue from the root vegetables of the artist’s childhood to the exotic flavours of his final home.

By comparison with the fairly pricey a la carte, the option of £53 for three courses from the special menu including a ticket to the show is a bargain and leaves room in the wallet to sample a couple of glasses from one of London’s finest cellars, winner of a Wine Spectator award.  Or the whole table can order a seven-course tasting menu, which includes the aforementioned halibut, pork with langoustine and almond cake, for £55; pre-booking required.

Tell me more about the Tate Britain restaurant

The EY Exhibition: Van Gogh and Britain and associated menu runs until August 11, 2019