Everyday life is a celebration in Seattle, even when the rain pours down upon ‘the Emerald City’.  Is it something in the air or in the vast expanse of water up here in the faraway state of Washington on the edge of North America’s pacific coast that makes Seattle seem different and happier than most other cities?

I ponder the question strolling around  enjoying its pleasant mixture of intense  energy, artiness with a laid back ‘divil may care’vibe in this renowned cruise port whose attractions will keep you busy for days. Where else would you find a laneway with an art installation fashioned from lumps of used chewing gum or a towering statue of Lenin carted over from Eastern Europe to preside over a bohemian neighbourhood? 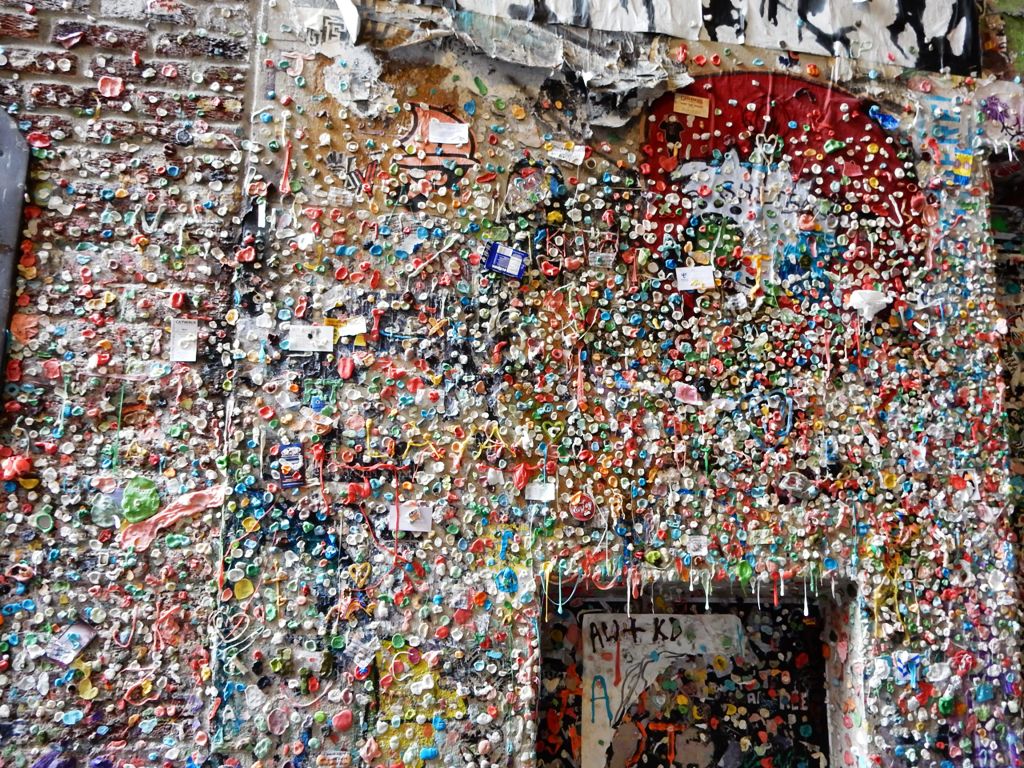 Or museums that celebrate Nerdvana?. Think Microsoft + Bill Gates and the birth of Grunge thanks to tortured rock star Kurt Cobain and his band Nirvana.

The world would be a different place without Seattle the city that brought us Boeing, Starbucks, Microsoft and is also home to Google and Amazon. Though extremely wealthy –  Microsoft created hundreds of millionaires who received stock options in place of Medicare –  that wealth is neither showy nor vulgar here.  Maybe they remember how Seattle’s  giant Boeing business was on the verge of Bankruptcy back in the 1960s when someone quipped “would the last person out of Seattle please turn out the lights”.

I was presented with an umbrella as my welcome to Seattle in late autumn. Arrive in a dreamy summer haze skies are an unblemished blue the sun shines all day and the waters surrounding the city sparkle.

Seattle’s glass working Michelangelo Dale Chihuly designed my umbrella, too beautiful to get wet or be assassinated in a tangle of spokes. And here’s the thing. Despite visiting in the month of October when rain is practically guaranteed we remained dry except for a few drops that fell in Tacoma while visiting a curious glass of bridge, one of Dale Chihuly’s masterpieces. 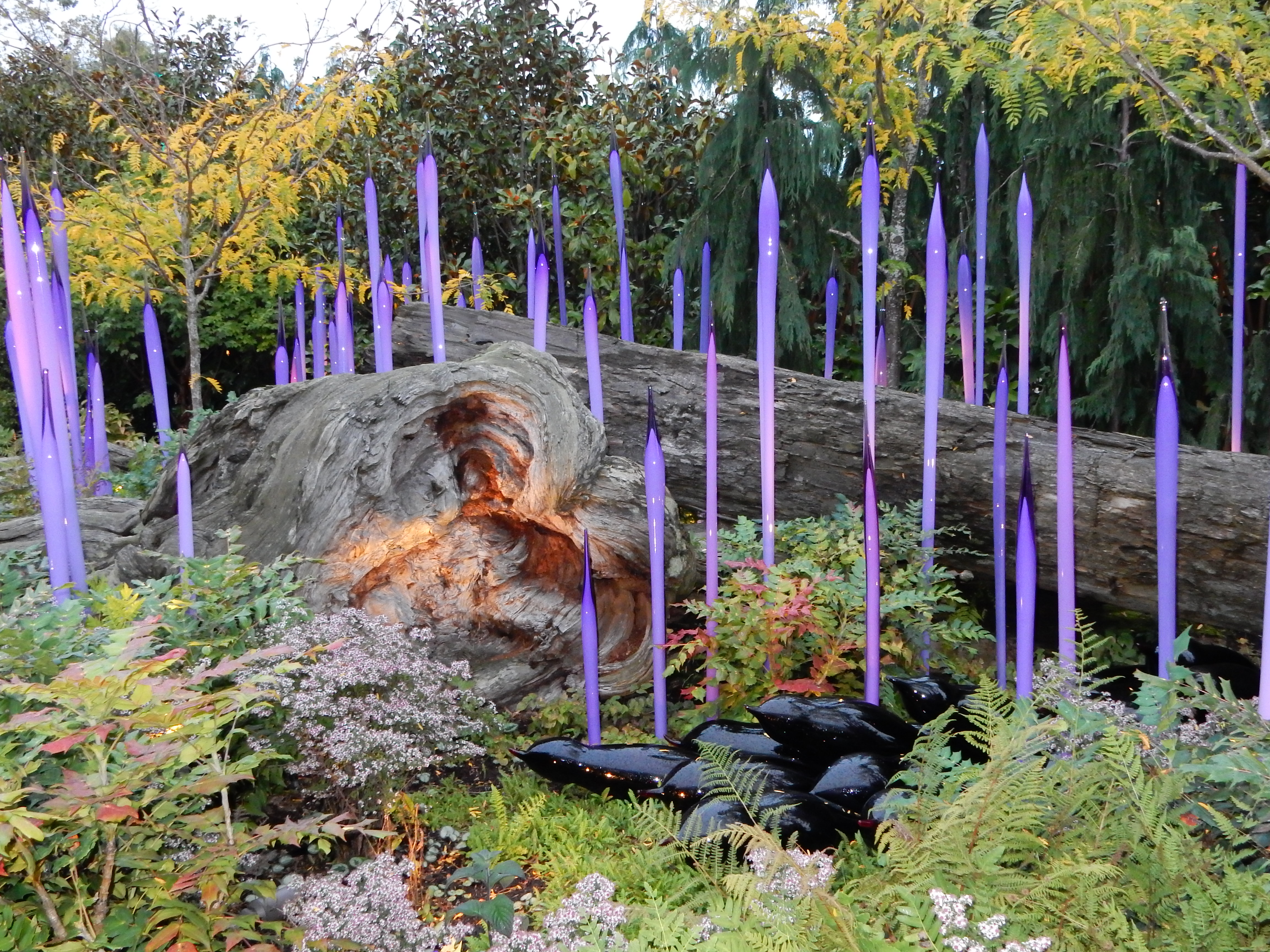 Popular presents to take home these Chihuly umbrellas  were flying out of the  gift shop attached to Chihuly Garden and Glass museum at the base of Seattle’s landmark Space Needle that offers 360 degree views.  Chihuly’s many coloured glass exhibits, from fantastical spiralling outdoor sculptures to indoor OTT chandeliers are a top Seattle attraction.

One of America’s favourite cities, Seattle has a noticeably friendly vibe, great restaurants and music spots and the waterside is full of life. It also has one of the world’s best daily food happenings, Pike Place Market where fun food tasting tours take place and you can watch whole salmon being flung through the air, quickly packed for home delivery with  splendid displays of Washington cherries, apples and other fruit.

Set well back from the waterside  Seattle’s origins as a spit and dust settlement come to life during a $18 Underground tour on the corner of historic Pioneer Square. Look forward to a  humerous stroll through subterranean store fronts and side walks entombed when the city rebuilt on top of itself after the great fire of 1889.

We plunged from  Doc Maynard’s Public house down into a time capsule view of the buried city. The bawdy rough and tumble Klondike Gold Rush period unfolds  among the phantom saloons and rows of brothels and illegal gambling dens that lined these streets where fortunes were easily gambled and drunk away.

Above ground again there is no greater contrast than a stroll around the Living Computer Museum (2245 First Avenue S. Admission $5 including guided tour) the latest brainchild of Microsoft co founder Paul Allen. This 15,000 square foot interactive museum features vintage mainframes, microcomputers, PC’s and more. You can fiddle with Microsoft’s infamous Bob interface and read the cv of an 18 year old Bill Gates here.

During a rattling tour on a old trolley car we found ourselves down at the harbour squinting into the sunlight at a luxurious houseboat which featured in the movie Sleepless in Seattle. Parts of ‘Fifty Shades of Grey were filmed in Seattle and various locations are pointed out on the trolley tour, a good way of getting your bearings and seeing quirky neighbourhoods like Ballard and Fremont and upmarket Capitol Hill. 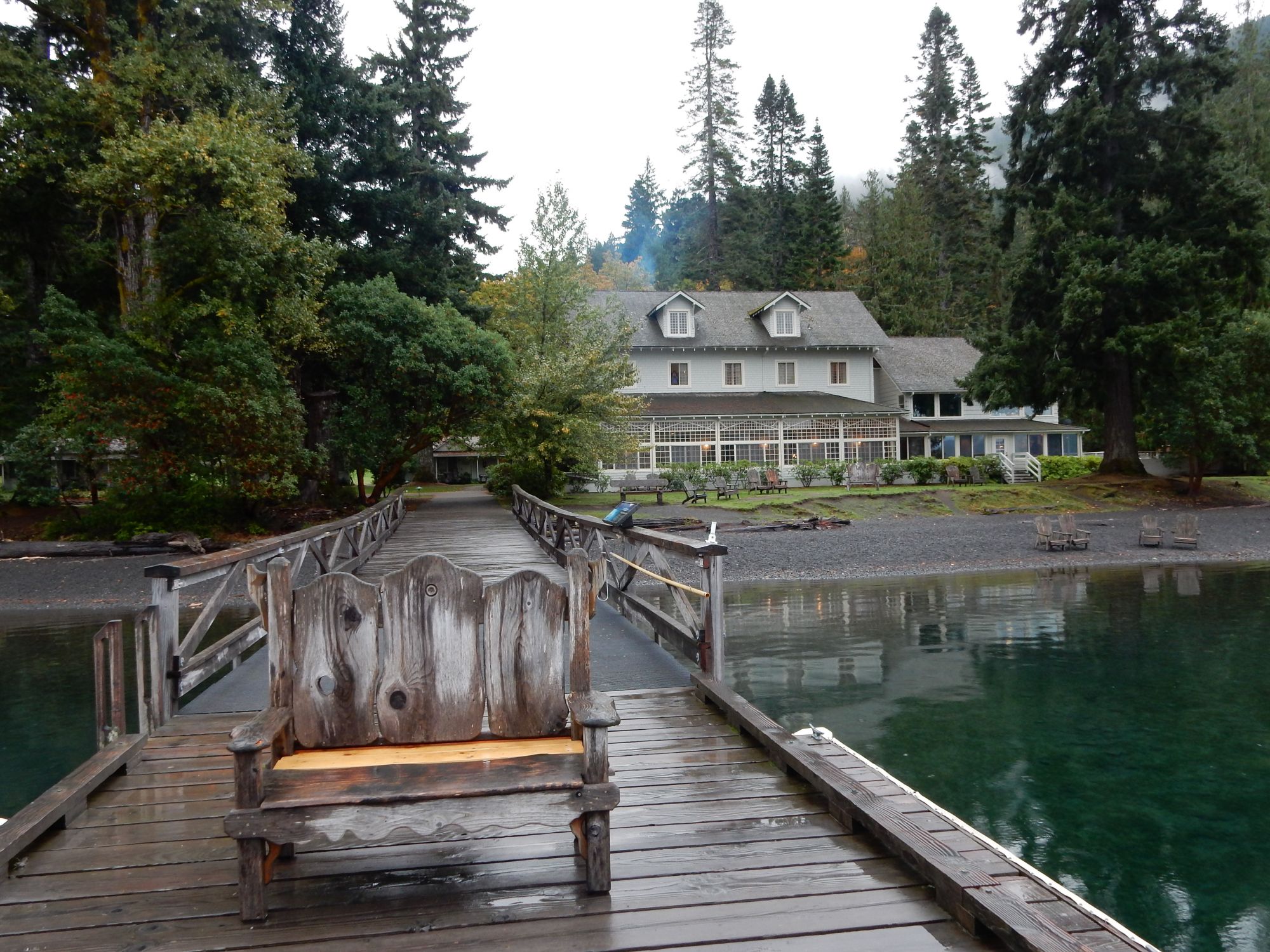 On Seattle’s doorstep  great stretches of wilderness along the Olympic peninsula and national park with unique ecosystems are worth a couple of days exploration.  Native American culture in these parts goes back 12,000 years to when tusked mastodons roamed this northwest corner of America.

Tribal customs and traditions still flourish, none more so than among Jamestown S’Klallam Indians. In  Sequim I met one of them, Dusty Humphries, who was helping to carve a massive totem pole bound for a casino forecourt.

Along a wild Pacific coastline of crashing waves on the Olympic Peninsula  colossal trees washed down by rivers form a gallery of drift wood sculptures on Ruby beach. Nearby we booked into nostalgic  Kalaloch Lodge  that overlooks a wild stretch of Pacific Northwest coast. Here and at lovely Lake Crescent Lodge on the shores of a deep glacial lake and also a  national park lodge, seclusion and tranquillity cut off mobile phone and internet wifi access belonging to that ‘ other world’. 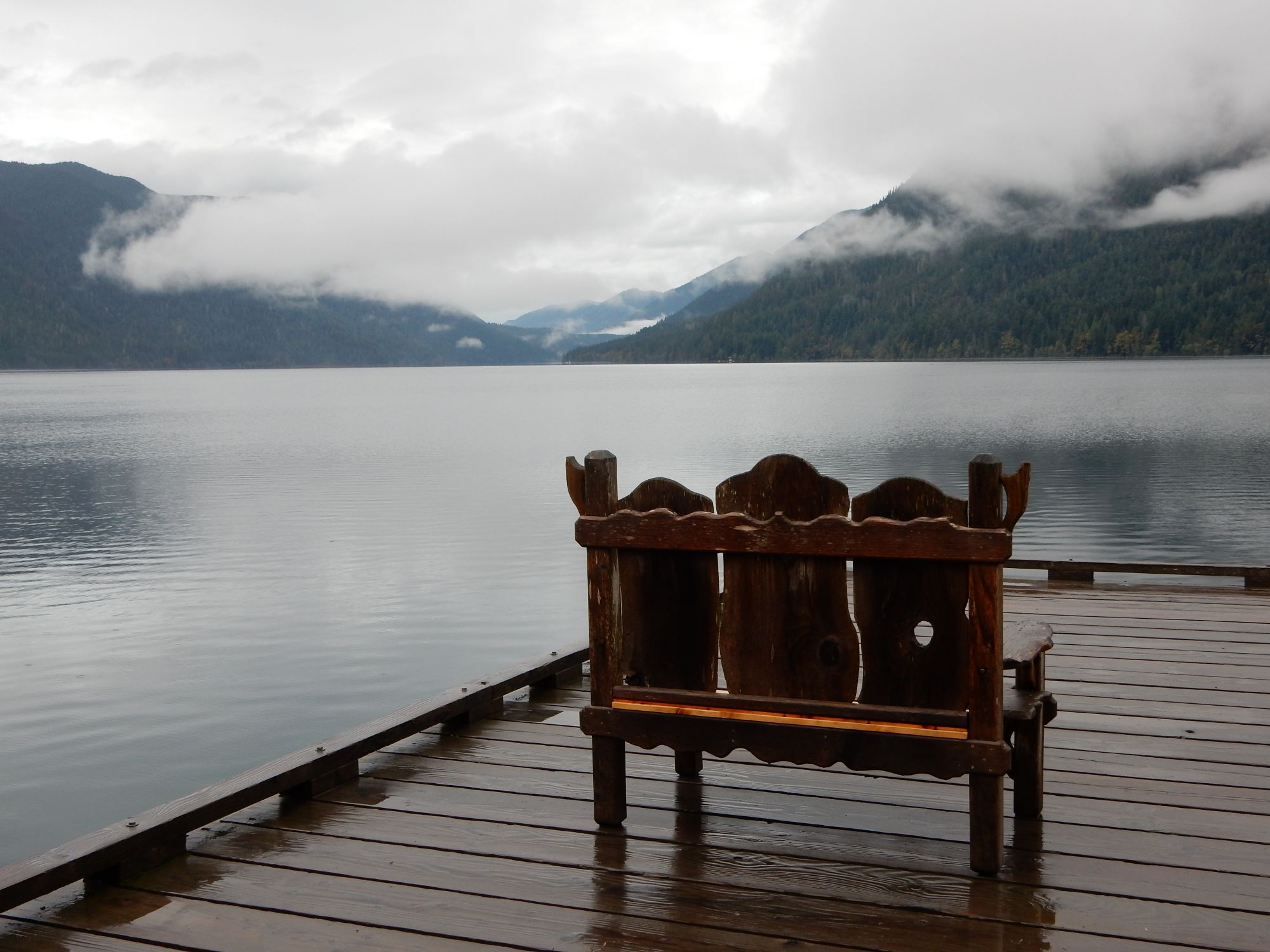 A large group of resident Orcas swim off the Olympic Peninsula and sightings of large numbers of migratory grey and other whale species are common place. Add to that the unique Hoh temperate rain forest, whose old forest trees can be up to 300 feet tall, the spectacular Cascade mountain range, home to wildlife that includes black bears and cougars, Roosevelt Elk and rare marmots and it is like stepping inside the pages of National Geographic.

In these parts the rough and tumble boom towns enriched by mining and logging are long gone. In Port Townsend fortune seekers on their way to the gold fields of Alaska would stop off while trading ships bound for the Orient docked. Today a pleasant tourist centre Port Townsend is popular with well heeled retirees, artists, writers and day trippers from Seattle.

On  the shores of Penn  Cove on tranquil Whidbey Island where 10,000 Indians once held  ceremonies stands the Captain Whidbey Inn surrounded by forest. Its walls are made of hand hewn logs and furnishings (with lots of memorabilia about)feel so authentic you could be back in the old West. The Inn, renowned for fine dining is famous for delicious locally caught  Dungeness crab.

An American breakfast is a daunting test of hunger especially at the Blue Moose Cafe in Port Townsend. Insider Christina Pivarnik, the town’s Tourism manager recommends the “This Ain’t no Atkins Special” a hill of corned beef hash and thick sausage gravy atop a biscuit (a scone the size of a small balloon.

About two hours drive from Seattle and supposedly the wettest town in America the little town of Forks  is where Twilight,books and movies based on a bestselling vampire-human  romance which wowed teenage girls for years was set. 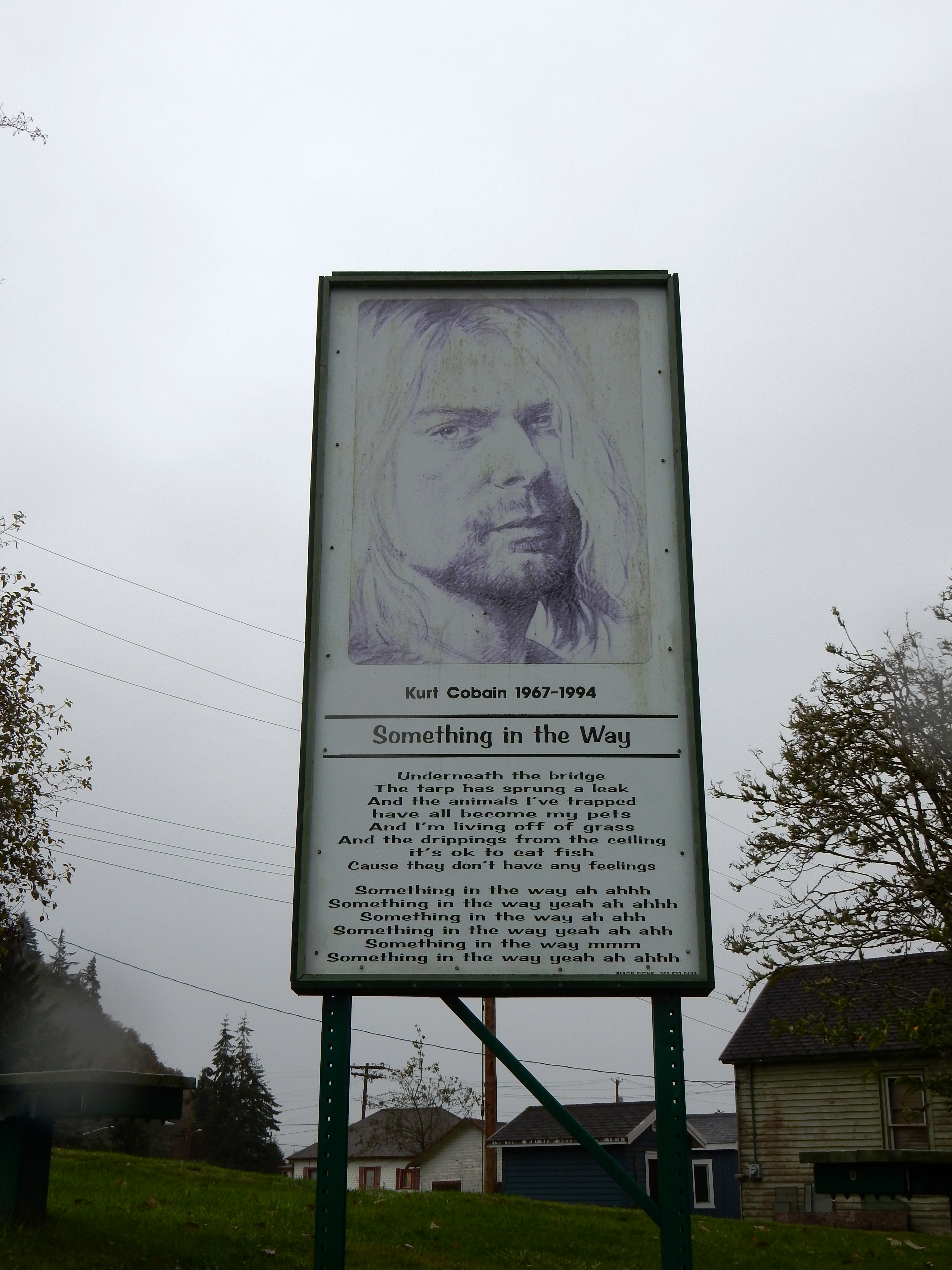 A half an hour further you arrive in  Aberdeen birthplace of tortured musician and figurehead for ‘grunge’ Kurt Cobain who died 21 years ago having battled depression drugs and drink. Aberdeen museum (111 East Third street) has a small permanent Cobain exhibition. Its curator Dann Sears went to school with Kurt’s father and knows a lot about the musician’s youth here.  On the edge of the  Wishkah (a indigenous  Indian name) river a  simple stone monument to  Kurt Cobain is inscribed with some of his sayings with a left handed  guitar of stone. Neither Forks nor Aberdeen are on that many tourists itineraries these days. But they did offer a contrasting view to that of superb wildernesses around UNESCO heritage sites of Olympic National Park and Peninsula, reason enough for a short stop off.

Find out more about Seattle and how to get there

For further information about Seattle and Washington State  see www.experiencewa.com and www.visitseattle.org . In Seattle Isabel  stayed at the elegant historic Mayflower Park hotel   and at a musicians favourite home from home downtown Hotel Max  that features blow ups of Nirvana, Kurt Cobain, Courtney Love and others on doors with turntables and a choice of vinyl  in its funky bedrooms.