With the redevelopment of Paddington imminent, the area is starting to spawn interesting new dining destinations after years as a bit of a gastro-desert. One of the first to jump on the bandwagon is the Norfolk Towers Hotel steps from the station, which has replaced their basement pub with a shiny new ground-floor eatery.

Roba Bar and Restaurant may look quite low-key and unassuming, but it has two secret weapons – a robata grill, that covetable piece of equipment originating in Japan, and a chef who has trained with Michelin-starred Marcus Wareing. Andrea Secchi aims for a modern and innovative menu, but also caters to passing trade with staples like the fish and chips and curry foreign travellers passing through London expect on a stopover in the British capital.
The star of the show in this room decorated with elegant neon lighting and wooden fretwork is actually the steak – 48-day-aged sirloin or rib-eye, a classy offering for W2, with organic lamb chops, corn-fed chicken and prawns alternative fodder for the robata. Ours were beautifully cooked, as were perfect fat chips, but Secchi would have been told off by Wareing for not putting enough tarragon in his Bearnaise sauce. Aioli coleslaw dressed with yogurt and plentiful garlic was an interesting accompaniment, and vegetarians are also well catered for with properly-made cheese tortellini and wild mushroom tagliatelle. 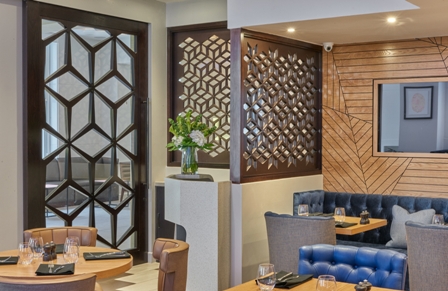 Starters show imagination and include excellent grilled red mullet sitting on a base of green “gazpacho” of broad beans and peas which would have benefitted from a shade less truffle oil. Heritage carrots in three colours were cooked al dente and served with dots of a gentle soft cheese mousse,
Full marks for the puds, of which the signature white chocolate and lavender pannacotta was outstanding. Star of the wine list was a very decent Lalande de Pomerol with plenty of age at a highly affordable £38.50.
Reasonable prices – mains from £11 and even those long-aged steaks under £20 – are part of Roba’s USP for as long as they last, and a good cocktail bar is another. Full marks for a well-made Old Fashioned and Mai Tai, but the house drink featuring Jaegermeister, ginger beer and creme de fraise syrup seems like an ill-conceived homage to Paddington’s drinking den heritage, best avoided when trying to take the area upmarket.

Tell me more about Roba Bar and Restaurant