I’m in Nashville’s Music Row on 16th Street, just a stone’s throw from RCA’s famous Studio B and I’m with Billy Montana and it’s raining buckets. Somewhat ironic really as Billy wrote the number 1 country hit Bring on the Rain, and frankly Nashville couldn’t bring on any more rain if it tried.

Billy’s a Nashville veteran with four number one hits no less, and these days plies his writing trade at Curb, the legendary record label that’s recorded Patsy Cline to Tim McGraw and everyone else in-between. We’ve been discussing the writing process and clearly it’s not all plain sailing.  “I might write 150-200 songs a year” he tells me “and even my wife might not get to hear any of them.”  I’m tempted to reveal doing anything like that with my tone deaf wife would be a similar lost cause, but decide to keep quiet. It is comforting for me that Billy can still hold his own faced with stiff competition from a seemingly bottomless pit of talented young songwriters. “I remember always wanting to play in front of an audience who knew my songs and after Bring on the Rain, I played the Bluebird Cafe and finally achieved it. Everyone knew it, but that’s all I had – just the one!”

I ask him if it’s lyrics or melody first ” I’m a poetry guy” he says ” words mean something, so for me a meaningful lyric will somehow bring out its own melody. 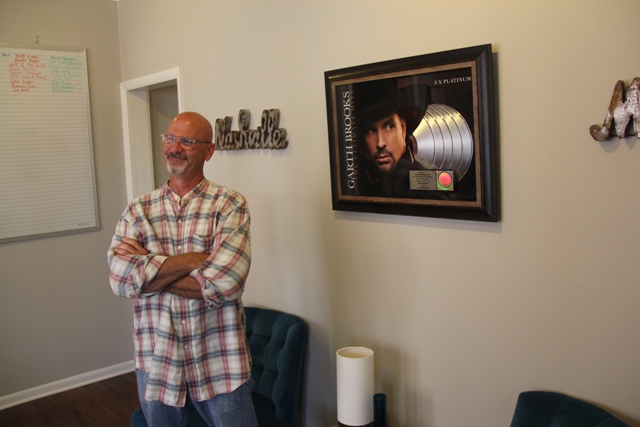 But there are times particularly when you collaborate with someone where a melody is a great starting point.”

I leave Billy to hopefully conjure up another hit and stroll past RCA Studio B. Elvis recorded over 200 songs here, and you can add Roy Orbison, Dolly Parton, The Everly Brothers and Jim Reeves to name but a few. You can get a tour of the studio as part of the admission at the Country Music Hall of Fame, itself a wonderful walk through the history of country music.

I am unashamedly a country convert. Having grown up listening to heavy rock and then finding soul music, it was the story telling and melodies of country that reeled me in. So for me, coming to Nashville is like going to church. And what better church to visit than the Grand Ole Opry, 90 years old this year. 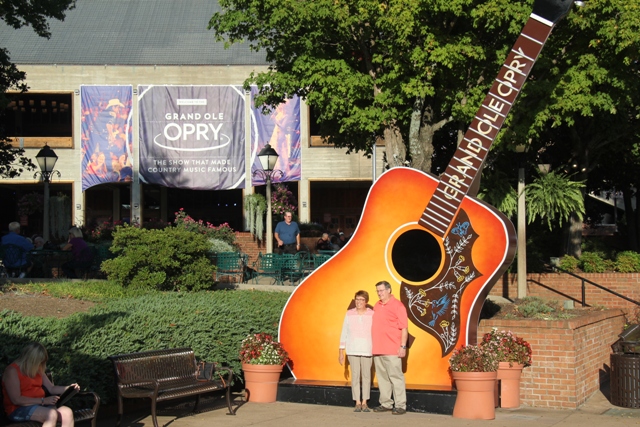 What began as the Union Gospel Tabernacle became the Ryman Auditorium , the spiritual home of a live country music radio show that has been a stage for every great country artist that ever was.

I was back at the Opry last night watching Rascal Flatts bring the house down and though it now resides on the Gaylord Opryland complex after finally leaving the Ryman in 1974, it’s lost none of its magic dust. I indulged in a post show back stage tour (although you can get a tour during the performances too) and got to stand on that famous stage holding the mike on my very own just for a few special moments. 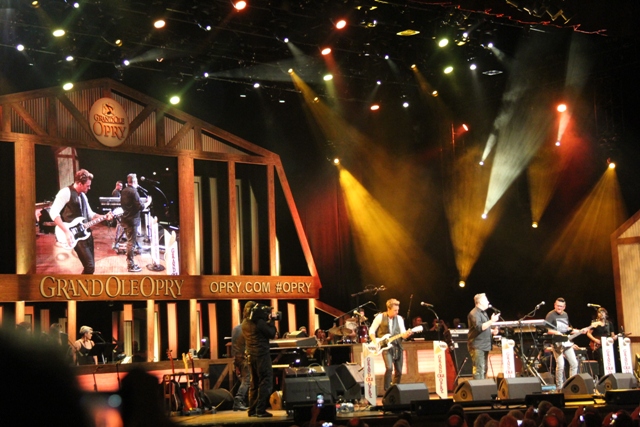 The Gaylord Opryland resort is itself a pretty extraordinary place. Just 20 minutes from downtown Nashville its 47 acres is home to a luxury hotel complex of nearly 3,000 rooms encased within an indoor landscape of rivers, waterfalls and 50,000 types of flora and fauna, 15 restaurants, the Opry Mills factory outlets within walking distance with over 200 shops offering discounted designer clothing and accessories, (some with as much as 60% off)  and just next door, the Grand Ole Opry itself. 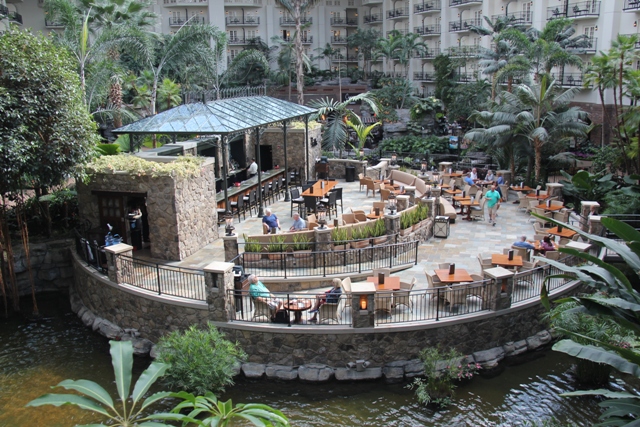 Nashville may have its legacy venues but there is no shortage of new musical shrines to discover. The new Johnny Cash museum is a worthy diversion for lovers of the man in black, whilst the legendary Hatch Show Print poster company has moved to a bigger and better building. I am however on my way two meet two other legendary figures; two gentlemen who between them have weaved a musical spell or two but for very different reasons.

Joe Chambers is the force behind The Musicians Hall of Fame, a shrine to the actual musicians, the unsung heroes who played on some of the greatest records ever made. Not just the musicians by the way, the instruments too. If you want to see the actual Gibson Eddie Willis played on Signed Sealed Delivered or the Coral guitar Joe South used on The Games People Play they are here. In fact if you have a favourite song lick, that instrument is no doubt  in a case somewhere here too. But previously to this, Chambers was a successful songwriter for CBS penning hits for George Jones, Tammy Wynette, Randy Travis and BJ Thomas, before running a successful guitar emporium. In other words Joe knows a thing or two about music. 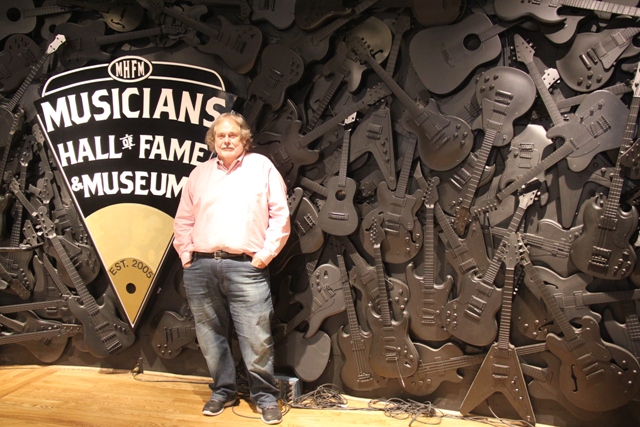 Someone else who can play a musical note or two is none other than the great Steve Cropper, the soul man himself.  His time with Booker T and the MG’s – the Stax house band made up of Steve, Booker T Jones, Donald Dunn and Al Jackson is stuff of legend.  This is the man who penned hits such as Dock of the Bay, Midnight Hour and Knock on Wood, played on just about every classic soul hit ever made and was and still is, an original Blues Brothers band member.

I am, needless to say, very excited.

We meet at Joe’s museum where Steve Cropper is looking decidedly spritely for a musical legend. I grip the hand that strummed countless riffs and feel a little light headed. I can’t let go. Steve’s easy going nature is such that he keeps his hand there, so we are more than momentarily locked together. Sensing this is getting awkward I release, and swear I hear a sigh of relief. 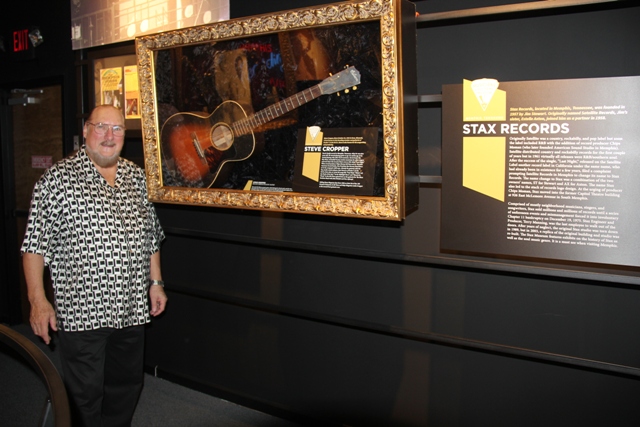 The three of us stroll over to the Stax section, where Steve’s first guitar proudly resides next to Al Jackson’s pale blue Pearl drum kit. “My daddy brought it home for me one Christmas as a gift from my aunt.  My uncle had it at home for people who wanted to have a little singsong after church on a Sunday. It was funny because he only played the fiddle, didn’t know one end of a guitar from the other.”  “How did he know you wanted it” I ask ” I’d begged my aunt for it for 6 or 7 years after my uncle passed away, but she wouldn’t let go of it. Just wouldn’t. do it.”

Joe tells me a story about Nashville: “This town has song writing landmarks all over it, but  there’s never any signs about them and there should be. I’ll give you an example. Roy Orbison said that he was in the upstairs room of a 3 storey house on the corner of 8th and Wedgewood  searching for some inspiration when he happened to look out at the street and saw a pretty woman walking by. The rest is history.”

Talking of history, Steve recalls how the MG’s famous Green Onions hit came about, making them a household name all over the world “Booker played me a riff one day when we were messing around in the studio and I felt it had a great groove, so 3 takes later we had an instrumental we were going to use as a b side cut at Stax. Maybe it was instinct, but I called my pal Scottie Moore who was Elvis’ s guitar player who worked at Sun records and asked him if he would cut me a demo of it which I took over the next day to another pal who was a disc jockey at WLOK our local radio station. I just wanted him to listen to it, but what I didn’t know was he put it out on air and the phones just lit up with folks wanting to know who the band was and what the song was called.” 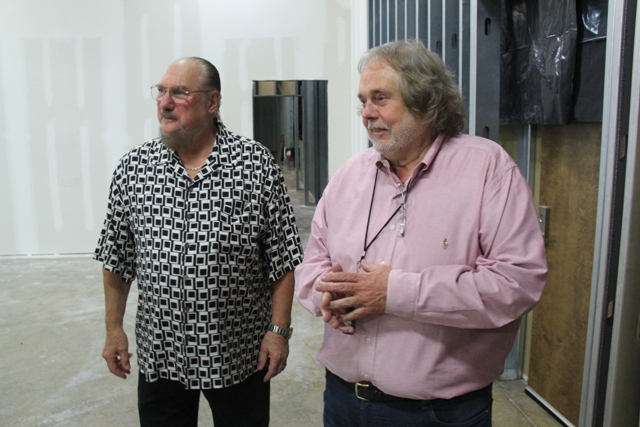 “Of course nobody knew who you guys were, you were just studio session players”

“Yup exactly.  Well we held an emergency meeting back at Stax and came up with a name Booker T and the MG’s which stood for the Memphis Group, and Duck Dunn the bassist said  ‘let’s call the song onions because it’s the stinkest song I’ve ever heard’ I said onions make people cry, but green onions is all we eat in these parts. So everyone agreed and that was that.” 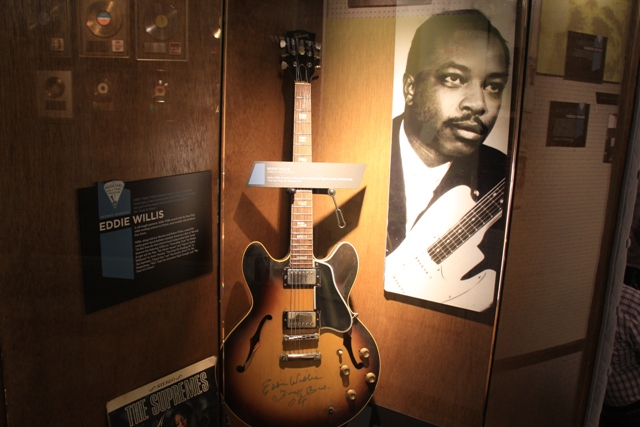 Our chat is interrupted by a young man visiting the museum. He does a double take at Steve and just stands by the wall almost shaking with excitement. Mr Cropper goes over and gives him his Kodak moment. As he returns, he gives me one more Otis snippet. “the thing about Otis, I believe his greatest skill, was he sung every song as if it was his last, like he was gonna die right at the end of that song”

Tragically, Dock of the Bay would prove to be his last, released just two days after he died in a plane crash.

I reluctantly leave Steve Cropper with an offer to become a Blues Brother anytime he needs a stand in, after all, give me a hat and shades and I can at least look the part if not exactly sound it. Joe promises much more is coming to the Musicians Hall of Fame and I look forward to coming back and seeing how his expansion pans out.

I walk back past Broadway’s famous honky-tonk bars, the live music from Nashville’s future hopefuls pouring out onto the sidewalk. Is there a star in the making? I think back to Billy Montana and Steve Cropper and realise you just never really know, do you.

Andy Mossack’s Nashville experience was part of a joint Kentucky and Tennessee road trip called “Only in America tour” available through Bon-Voyage from £1,695 per person and includes car hire, flights to Cincinnati Ohio and return from Atlanta Georgia, 14 nights mid to high end B&B accommodation and a personalised North America road book with full itinerary and travel tips.

Gaylord Opryland rooms from 270 per night.

UK Airport car parking: I Love meet and greet offers valet parking at Gatwick, Stansted and Heathrow airports. Costs vary throughout the year with a week’s parking at Gatwick starting from £78. Book at www.ilovemeetandgreet.co.uk