Andy Mossack reviews the recent golf renovations at La Mer and La Forêt and joins up with course architect Patrice Boissonnas to hear firsthand what’s made everyone excited at Le Touquet Golf Resort.

With La Mer, Harry Colt created a masterpiece in 1931. A golf course befitting the aristocrats, Hollywood A listers and well to do who were flocking to Le Touquet in their droves. This elegant little town just a short drive from Calais was so on trend it was dubbed Paris by the sea and more than lived up to its star billing. Ian Fleming was a frequent visitor and resident for a while and legend has it, his first Bond book Casino Royale took its inspiration from Le Touquet’s casino.

By the time of Harry’s masterpiece, the resort already had two courses; La Forêt designed by 19th century golfer Horace Hutchinson and opened by British Prime Minister Balfour in 1904 and Le Manoir, a 9 hole course, opened in 1910. La Forêt had already hosted two French Opens, but with La Mer as the jewel in the crown, Le Touquet’s golfing fame soared and it became the destination of choice for many more championships including four more Opens. 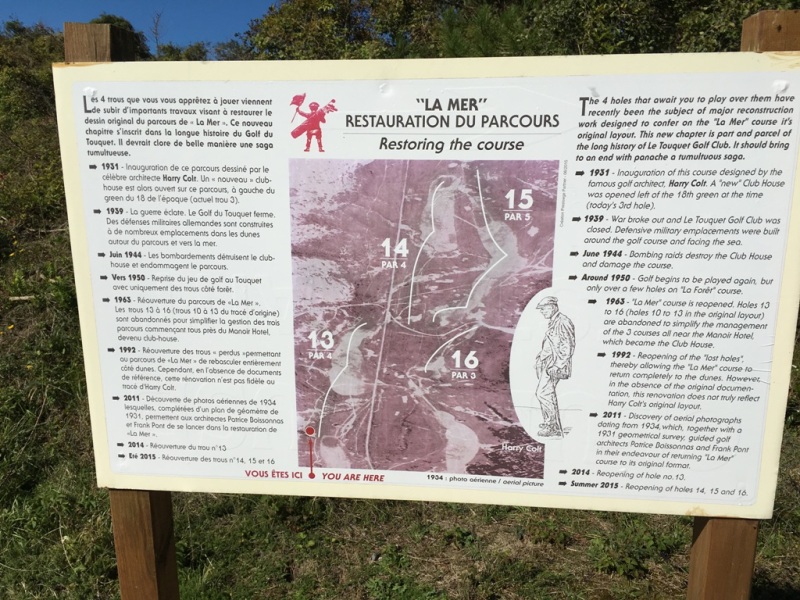 Like Hardelot’s golf courses just a few miles north of here, WW2 put paid to Le Touquet’s popularity and four of Colt’s legendary holes, the 13th to the 16th, were lost to bombs and even though in the fullness of time, the town recovered, as did the golf courses, Colt’s lost holes remained just that. Lost.

But fortunately, golfing salvation was recently at hand.

After some impressive detective work and years of restoration by golf architects Frank Pont and Patrice Boissonnas, Colt’s lost holes on La Mer are once again alive and well. Make no mistake, this has been an ambitious and expensive project which has also included a new, state of the art clubhouse and significant improvements to La Forêt. It’s an impressive statement from the owners who’s investment and passion has considerably raised the golfing bar at Le Touquet making it a real contender once again for future championships. 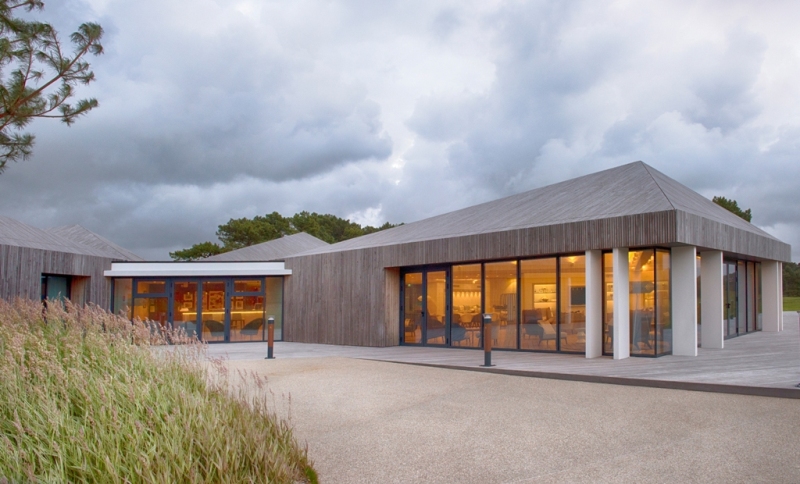 Patrice Boissonnas joined me for a round at La Mer, the course he literally ate, slept and dreamt about for the last few years

Considering he has spent so long walking around these links in his head and on his feet, Boissonnas had no qualms about taking in yet another round. We’d just spent an hour in Le Touquet Resort’s impressive new clubhouse looking at some remarkable 1930s aerial photography of Colt’s original course uncovered by one of the club’s members. “Without this we would have had no other way of knowing where those original holes were” he told me. “All Colt’s original drawings and plans are long gone.”

The true links course Colt conceived through the giant sand dunes that line the coast here, had gradually over time succumbed to the encroaching forest. “From the photos, we realised where each hole routing was supposed to go and so we had to remove large swathes of trees. We could also see the position and shape of every bunker and green. It really was an invaluable find.”

La Mer has never had a proper clubhouse since the demise of the original decades ago, so it’s still a ten minute walk there and back from the main clubhouse. “There is a car park over there if you just wanted to drive over and play but we’ll be building something small there soon.”

The first hole on this 7,006 yard par 72 is dog leg par 5 with a large tree on the fairway. Boissonnas who plays of 4 announced  “Either side is good” and proceeded to slam it across the dog leg in perfect position to get on in two. Sadly, he missed and made a greenside bunker. ” Regretting putting a bunker there now are you?” I said trying not to sound smug.

He answered with a sand iron stone dead. 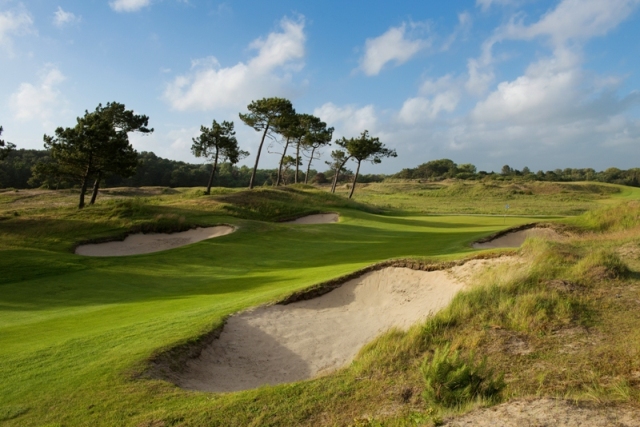 The second was a glorious 216 yard par 3 between dunes with a funnel green that gathers the ball from both sides. “this is a perfect golf hole.” Patrice beamed “One of Colt’s best holes right here.”

The third hole was actually the original 18th. “If you look closely around the dunes to the left of the green you’ll find a few remnants of the old clubhouse. The fourth was really the old first hole, a typical Colt opening par 5, a long one to help get your swing oiled.”

After negotiating the 7th, a very tough uphill par 3 with an insane borrow, we chatted about the popularity of island greens in course design.

“Beautiful looking holes and great drama, but I’m not a fan.” He said. “I like run offs. Most resort golfers don’t enjoy penal golf, they want to be able to get rewarded for a good shot that’s makeable whatever your level.” 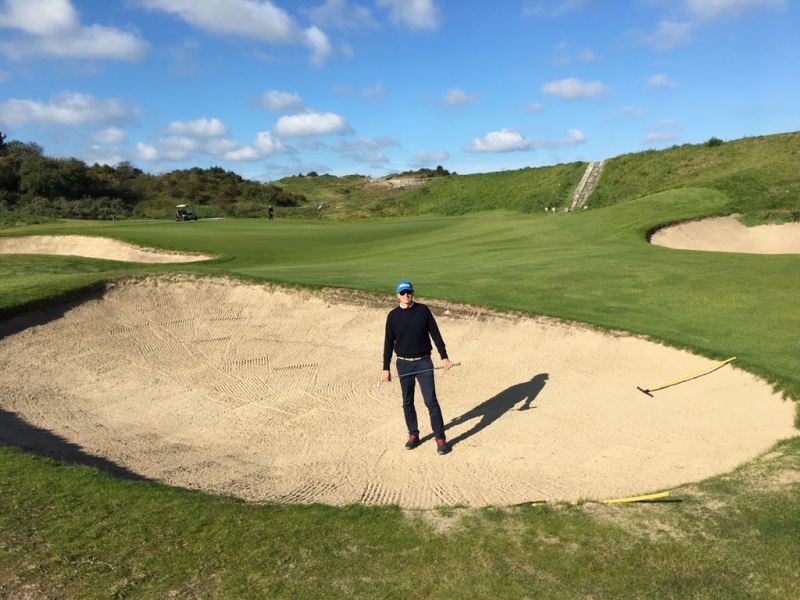 The 8th is a memorable hole for Patrice. Three large bunkers guarded the green. “See the middle one, that was the very first bunker I designed.” Obviously it needed some photographic evidence, and I was glad to oblige.

The back nine was a lot more challenging in my opinion with some long par 4s, particularly the 11th . To me Colt’s newly recovered holes feel part of the whole now; a complete links. The dramatic downhill closing hole a fitting climax to a wonderful course.

La Forêt however is certainly no ugly sister. Winding its way through pine forest, you’re sheltered from the wind and it’s not as long as it’s more challenging sibling at 6,300 yards. Still, it’s an enjoyable challenge, the recent modifications improving it noticeably, particularly the long 8th, the delightful par 3 10th and the three closing holes. 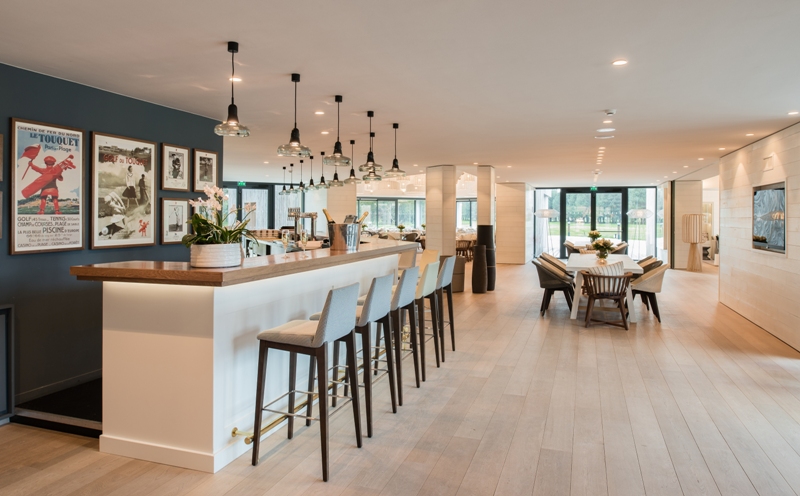 The new clubhouse is a state of the art space. Set on one level, there’s lots of internal space and plenty of glass offering up panoramic views of the course and forest. Another surprise is the restaurant. Fabrice Cherault was formerly the number two chef at Le Pavilion, a one Michelin star restaurant at The Westminster, Le Touquet’s fanciest hotel. He has raised the bar on food at the clubhouse significantly. Come the evenings though, you’ll find him lording over the kitchens at Le Manoir Hotel just across the road. This historic property, just a long putt away from the clubhouse, recently underwent renovations of its own and under Cherault, now has a gastronomic restaurant to be proud of. 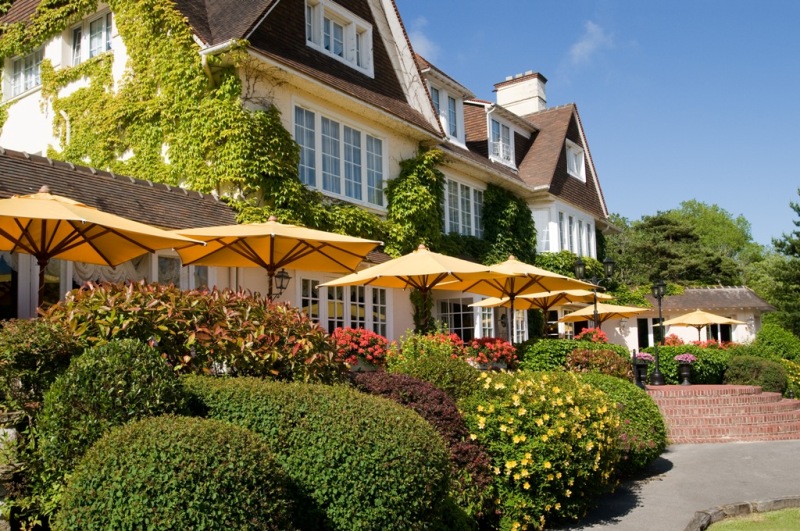 The shiny new Le Touquet Golf Resort is irresistible. All too easy to get to from the UK and Europe, it ticks all the boxes for me. Excellent golf and accommodation packages to suit all levels.

Rooms from €92 including breakfast.

*This package will not be valid from Friday 04th to Saturday 10th May 2018 and a bank holiday and Saturday night supplement of €30 applies.

*This package will not be valid from Friday 04th to Saturday 10th May 2018 and a bank holiday and Saturday night supplement of €30 applies.

Supplements for both packages include: