The Changing Face of Valletta

There’s a large gateway guarding the huge bastion walls of Valletta, Malta’s historic capital that has recently been the subject of much debate.

Mainly because it is not there anymore. Or, to be more accurate the actual gate as the locals knew it is not there. Not that this particular gateway was some ancient  historic entrance needing protection, far from it; it was erected in 1964 replacing the more grandiose one built by the British Royal Engineers in the mid 1850s. The reason for all this consternation is City Gate and the opera house square behind have had a distinctly 21st century makeover courtesy of Italian architect Renzo Piano, the man behind London’s infamous Shard. This ambitious  €80 project might at first glance look a little out of place amongst Valletta’s ancient streets; the new opera house area Pjazza Teatru Rjal  is an open air space mixing steel girders with stone pillars, and the brand new parliament building next door has been described as a stone cheese grater by some. 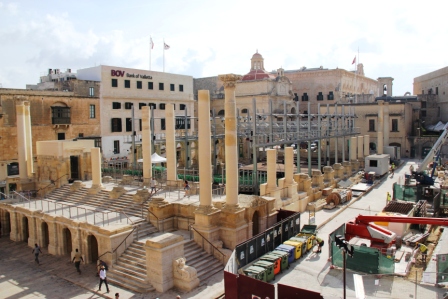 The truth is this project has renovated what had become an ugly and abandoned section of the city in dire need of redevelopment following war damage in WW2. As project co-ordinator Guillaume Dreyfuss explained  “it is true we have been slow in communicating this project to the local community, but this work genuinely embraces the feel and history of Valletta albeit in a more modern interpretation. It is more or less modern baroque. 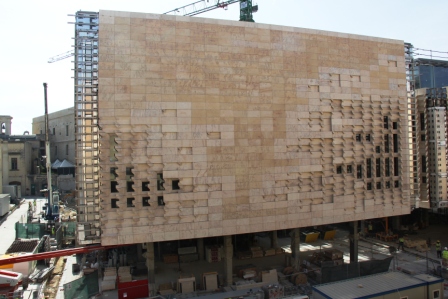 For example limestone symbolizes Valletta, after all the city is built with it. So the new parliament building is in effect a giant single block of carved limestone taken from the local quarry.” Ok but why the “cheese grater” look I ask. ” the outside grooves actually represent erosion  which is typical of soft limestone and you can see its effect on the bastions and building around the city. We are just replicating nature.”

The old opera house ruined for over 60 years was never going to be able to hold a big enough audience to make it viable so an open air structure mimicking the ancient traditions of Roman and Greek amphitheatres was introduced instead. 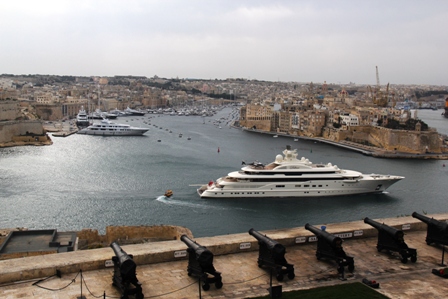 Valletta though, is much more than simply a work in progress. It is on the contrary, a city filled with all manner of UNESCO wonders thanks in the main to the legendary Knights of St. John who made it their fortified home in the middle ages. Valletta’s ancient narrow streets are filled with baroque architecture; huge palazzos once homes to the Knights of old, but now stunning examples of an era long gone. Buildings such as the Casa Rocca Piccola and the wonderful Palazzo Falson are time machines from noble Maltese families that are a delight to explore. The Upper Barrakka Gardens with the magnificent views across the waterfront and the Grand Harbour with the three cities of Victoriosa, Cospiqua and Senglea beyond are a must see and of course the jaw dropping sumptuousness of the St. John’s Co-Cathedral with its frescoes and Caravaggio’s John the Baptist masterpiece, the Knights’ jewel in the crown. 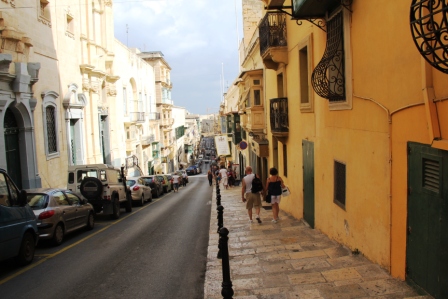 Malta is slowly gearing up for its investiture in 2018 as European Capital of Culture with the City Gate project taking centre stage and perhaps with a little better  communication to the locals, the project may be seen in an entirely different light.

Where to stay in Valletta

The Phoenicia Hotel right next to City Gate offers turn of the century 5 star  luxury and unique for Malta, huge gardens overlooking the bastion walls with a pool and sun deck at the rear.

The new Malta Direct Malta Pass is a sightseeing card giving you free entry to 40+ attractions and discounts at 50+ restaurants, shops and other activities across Malta and Gozo. The pass is available as a 1, 3 and 5 day option.