Cortina is famous as a chic ski resort, nestling in the River Boite valley, beneath the imperial stone towers of the Dolomites, in the Southern Alps.

The 1956 Winter Olympics put it on the map but the rich and famous had been coming here long before.

Indeed in 1950 Ernest Hemingway finished his novel Beyond the river and among the trees in Hotel de la Poste’s room 107 and they’ve preserved it exactly as he left it, complete with typewriter. Much later Roger Moore shot scenes for the 1981 Bond For Your Eyes Only movie in the main square of Corso Italia, although there was no snow and it had to be trucked in from elsewhere. 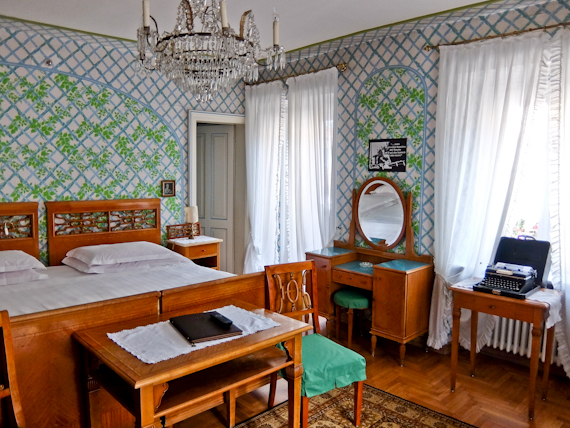 Outside the ski season, there’s some very good hiking here, and the trails are dotted with a network of rifugios or mountain inns.  The accommodation is in dormitories, although increasingly more establishments are offering private rooms. The real attraction is the excellent Italian cooking and their location – many are above 2000m and you wake up to a sunrise, literally at the top of the world, staring at these majestic peaks.

Of course, the rooms in Cortina are of a very high standard but I do feel distinctly underdressed as I set off down the main street mingling with smart Italians in their designer furs. Still the mountains are beckoning and I have a lunch date at Ristorante Lago Pianozes. This is a deceptively simple establishment by a little lake in the woods, but the cooking is impressive. 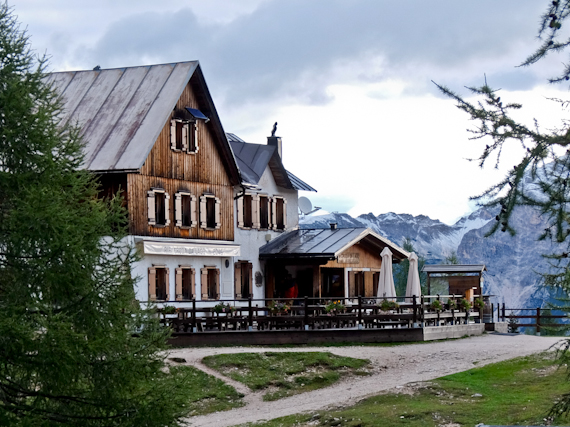 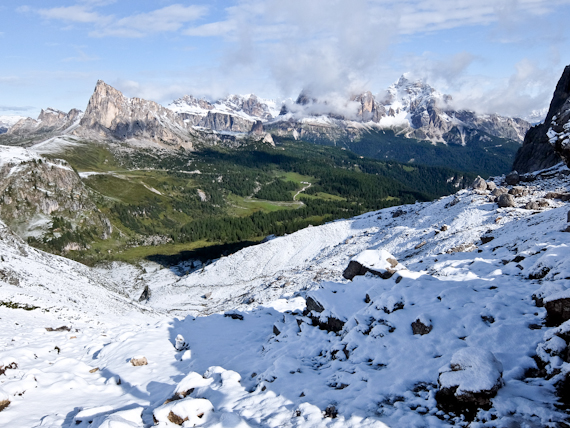 From here it’s a stiff climb, following streams and waterfalls, up to Malga Federa and then on to Rifugio Croda da Lago, my night’s lodging at 2046m. By now the rain has set in and I join bunches of saturated hikers in the bar for a warming expresso. The mist has come down so visibility is zero and I can’t see the lake or the mountains. Fortunately, it’s warm inside and, after a hearty meal, I settle into my dormitory bed for a reasonably peaceful night.

In the morning, the clouds have gone but the peaks are dusted in white and it’s cold but sunny. As I climb upwards I’m soon on virgin snow and my footprints are the first of the day.  At Forcella Ambrizola, 2277m, I’m surrounded by those distinctive Dolomite cathedrals of stone, rising out of the wintery landscape. 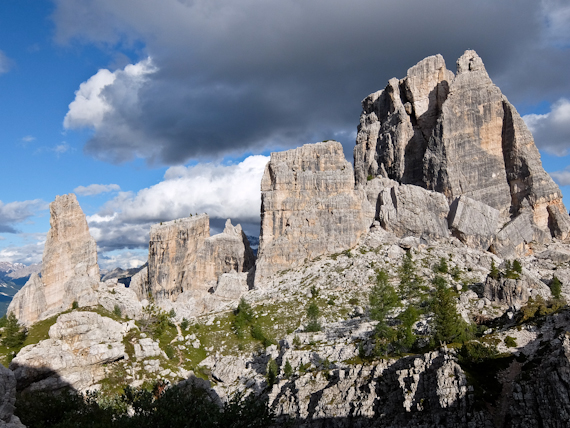 Pressing on I trudge further uphill, on an icy track to reach Forcella Giau, the highest point at 2360m. Thick snow has built up on the other side of the pass and I descend steeply up to my ankles in the stuff. Below the valleys are green and snow begins to thin out as I reach Passo Giau. Lunch is at Da Aurelio, a ten-minute walk downhill where Chef Gigi Dariz likes to forage his food. The flavours come from local herbs and wild flowers and he adds a modern spin to traditional recipes. 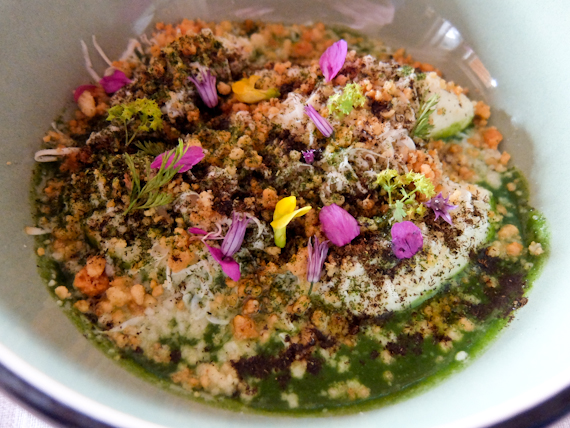 It’s then back up to Passo Giau and an easy climb to Rifugio Averau where I’m spending the night. Just below is the cluster of pinnacles known as Cinque Torri, spectacular in the late afternoon sun. Rock climbers dangle from their steep walls but I’m interested in exploring the open-air WW1 museum. The Italians dug trenches and gun emplacements here to defend the pass from the Austrians. They’ve been imaginatively restored, complete with soldier mannequins in full battle dress.

The Rifugio Averau is cosy and the food is exactly what you need after a walk in the snow. It’s listed as one of the 10 Best restaurants of the Alps and hearty vegetable soup, rabbit stuffed with cheese and apple strudel mean they’re not wrong. In the morning the valleys below are obscured by a sea of clouds but the peaks are crystal clear. I hike around the side of Mount Averau, then descend to the picture-postcard Lake Lìmedes, snowy mountains reflected in its waters.

At Passo Falzarego I take a cable car up to Mount Lagazuoi and once again am in the mist and deep snow. I’m here to meet Andrea Orsi, dressed as a WW1 soldier, who’s going to take me around the Austrian frontline.  It’s honeycombed with trenches and gun emplacements and the Italians dug tunnels into the mountain and planted mines to try to dislodge them. Although substantial chunks of the rock face were dislodged, the Austrians stayed put. They dug tunnels of their own, which you can explore, although you need a harness and hard hat. 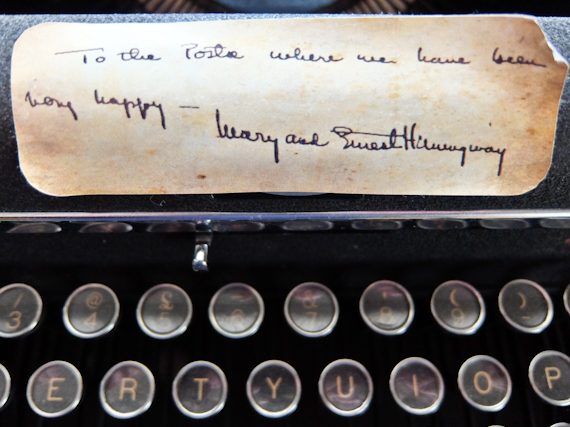 Taking the cable car back down I get the bus back to Cortina. I can’t leave without stopping at the Hotel de la Poste and visiting the Hemingway room, still as it was in 1950.  His typewriter is set up by the window and there’s a post-it note attached to the top, from Mary Hemingway, saying they were very happy here. It’s still a working hotel room but fortunately, they’ve updated the bathroom since the great writer’s time.

Tell Me More About Cortina d’Ampezzo

Hotel Ancora makes a comfortable base in the centre of town and has an excellent restaurant.

You don’t have to stay in the Hemingway room at the Hotel de la Poste, but you should certainly sample their stylish Italian cuisine.

For something different try the Japanese influenced food at Restaurant Fvsion.

easyJet flies direct from London Gatwick to Venice and the bus transfer to Cortina takes around two hours.

Gatwick Express has a high-frequency, non-stop shuttle service to London Victoria in the heart of London. The trains have real-time passenger information systems, air-conditioned carriages, power sockets and Wi-Fi. Online bookings get a 10% discount.