Hornblower would be proud.  I’m at the railing, watching the waves lit by the full moon, the only sound the wind in the sails, the vessel gently rolling and making good progress. But, unlike those sailors of yore, I’m not about to return to my hammock amidships, but instead have a luxurious cabin complete with comfortable bed and shower.

This is the Royal Clipper, the largest five masted fully rigged sailing ship in the world on its Mediterranean cruise, from France to Italy.

I arrive in Cannes after an easy thirty minute transfer from Nice Airport. The Royal Clipper is anchored in the bay, sails furled, and the tenders are waiting to ferry me and around 200 other passengers to the ship. They’re younger than most cruise clients, probably because the ship has no lifts and there are stairs to negotiate.  With everyone safely on board, we set off for Italy, using the engines, as there’s not enough wind for the sails 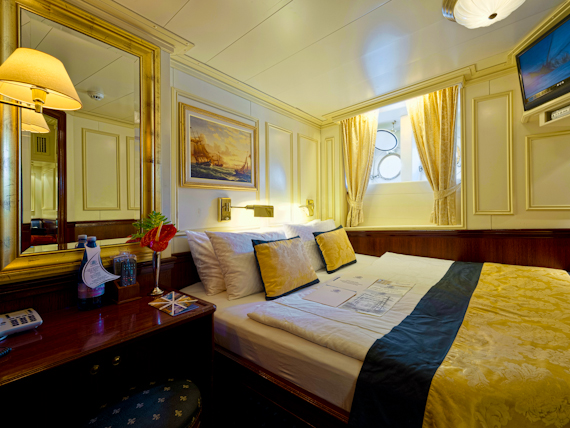 My spacious cabin is on the Commodore deck, almost at sea level, and it’s comfortably equipped with a large double bed, ample storage space and bathroom, with shower, washbasin and toilet. Two portholes allow me to monitor the world outside. Dinner has waiter service and there are at least a couple of choices on a menu which includes appetiser, soup, sorbet, main course, salad, cheese and dessert. I’m not going to go hungry.

Morning sees the coast of the Italian Riviera looming and I go out on deck for a 30 minute session of yoga, open to all passengers, although the number stays at a comfortable ten.  We pass Genoa, follow the Riviera di Levante and arrive at the attractive port of Santa Margherita Ligure. After a buffet lunch, I don my walking boots and take the tender into town. I’m foregoing the organised shore excursions and following footpath maps, provided by the tourist office. 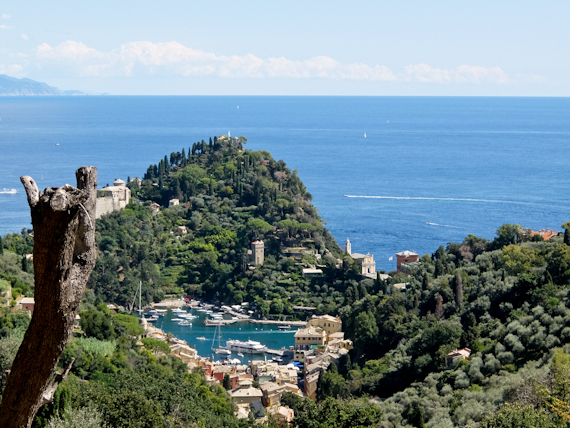 Climbing the hills above the town I enter the Monte di Portofino National Park. Here a well signed path leads me through tiny villages before descending steeply to Portofino. The stunning horse shoe harbour, lined with pastel coloured houses, is dominated by Castello Brown on the hill above. Although a cluster of super yachts are moored in the bay, the piazzetta is strangely quiet, perhaps because it’s almost the end of the season.

We sail overnight and next morning arrive in L’Isle Rousse on Corsica’s North West coast. The craggy mountains of the island’s interior provide a backdrop to the town but they’re too distant to tackle. The lady at the tourist office insists there are no walks that start in town but I have other information. My guide book shows a ten mile trail which ends near a railway station further down the coast. After checking the timetable, I set out. 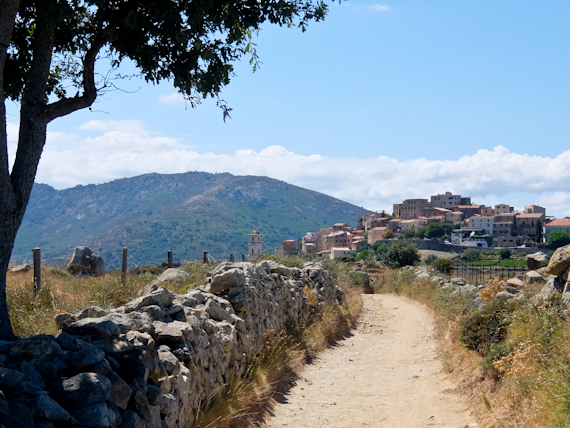 The way is marked by yellow flashes and I climb steadily, reaching Occiglioni at around 400m, nothing more than a handful of houses, before reaching the 9th century hilltop village of Sant’Antonino. It fully deserves its title as “one of the most beautiful villages in France”, its rectangular stark stone buildings silhouetted against the sky. I pick up the pace, conscious of the time, but I still manage to miss the train. After desperate pleading, a kind family gives me a lift back to port.

I celebrate my narrow escape with a large beer and regale anyone who’ll listen with the story of my escapade. Perhaps the story reaches higher command because next day, when I’m planning to leave the ship and join it later in Bastia, I have to inform the purser. She has a hurried conversation with the captain who advises against it, as he says the road is blocked. I point out that I will be on the beach, following the shore, so he grudgingly gives his permission.

It takes around four hours to walk to Bastia, a picturesque town with a recently restored citadel, home to an excellent museum. This time the boat is moored at the port, so there’s no need for tenders, and I make it with plenty of time to spare. As we leave, all 42 sails are hoisted for the first time, to the sound of Vangelis, as we majestically make our way along the coast before setting out for Elba. 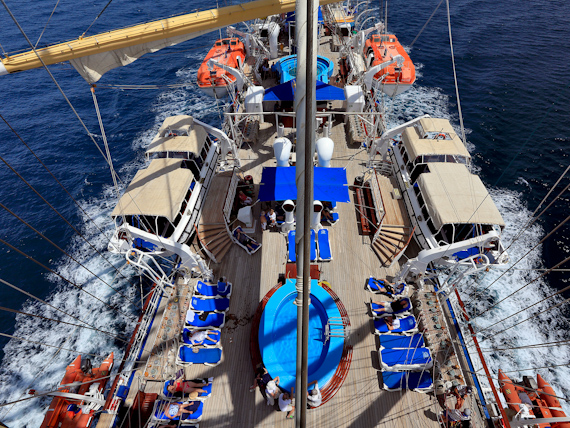 Portoferraio, the island’s capital, is probably the most attractive town of the entire voyage. Narrow winding alleys climb up from the harbour to the double fortifications of Forte Falcone and Forte Stella, where there are glorious views from the 16th century ramparts. The Villa dei Mulini is where Napoleon lived during his exile, before making his comeback at Waterloo, and his death mask rests in the Chiesa della Misericordia.

No hiking today as I’ve signed up for a bike and kayak excursion. We cycle along the coast, dodging the traffic, for about an hour before reaching a beautiful bay. There we transfer to kayaks and, after paddling through sunken caves, pull up on a deserted beach for a swim. It’s an exhilarating morning, although I’m looking forward to my morning yoga to soothe my aching shoulders. 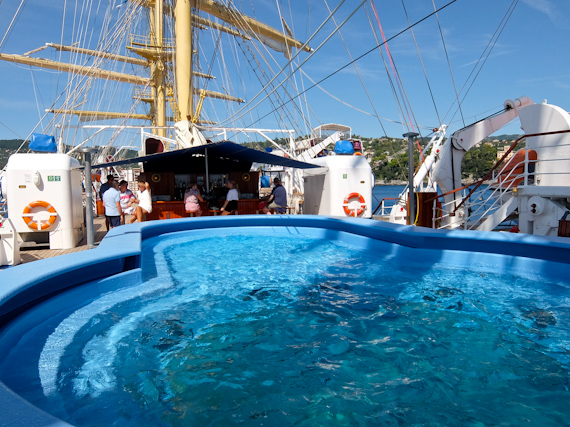 Overnight we sail back to Corsica and anchor off Portovecchio, standing proud above the port.  The town is pleasant enough, but seems to be entirely dedicated to tourism with souvenir shops, cafes and restaurants. I enquire about hiking trails but the tourist office tells me that I need to take a boat. Time doesn’t allow so I return to the ship.

I have a similar problem next day at Porto Servo in Sardinia, the capital of Costa Smeralda. The coastline was developed by the Aga Khan in the 1960’s as a playground for the rich and famous. In the harbour, my way leads past designer stores, including outdoor showrooms for Rolls Royce and Bugatti, and there’s not a tourist office to be seen. I content myself by walking to the nearest beach and enjoying the crystal clear waters. 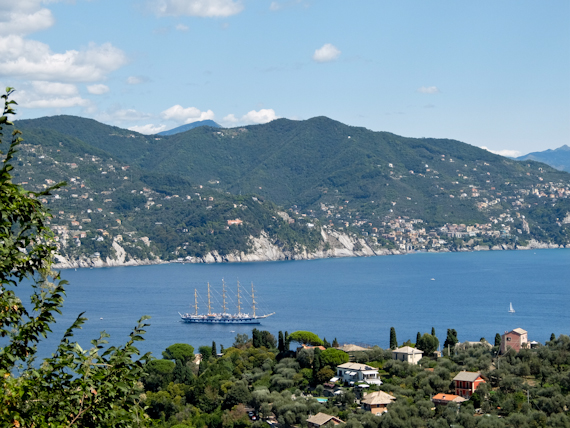 It’s the final night on board as we make good way under sail to Civitavecchia, the port of Rome. After dinner everyone gathers on deck for a final drink. Mercifully on Star Clippers there’s none of the mass entertainment that you find on other cruises, although they do run the odd quiz. Tonight, though, the hypnotic pulse of the Mediterranean, the waves breaking into white horses and the sound of the wind in the sails, is the best sort of nightcap you can ask for.

TELL ME MORE ABOUT STAR CLIPPERS

EasyJet flies from Gatwick to Cannes and Rome back to Gatwick.

The Gatwick Express is the fastest way to the airport, from central London.