I’m at the Slow Fish event in Genoa, Italy’s largest port, whose mission is to preserve traditional and regional cuisine and encourage sustainable fishing.

It’s held on the quayside of the old port next to the city’s medieval centre, a labyrinth of narrow streets where people still live and work. Traditions are preserved in its historic shops, trattorias, cafes and bars, where you can find typical regional products and local specialities. In my time here, I spend a few hours every day exploring this living culinary museum. 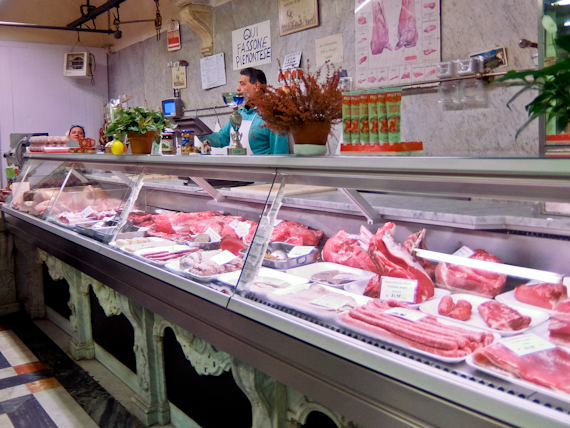 Meat traders in the Middle Ages were confined to an area called Soziglia where you find Macelleria Nico, in operation since the end of the 18th century. It has the original white Carrara marble counter, supported by columns with depictions of oxen, bulls and cows. The floor is laid out in geometric marble and you can still see the original meat hook rack with a pulley, used to hang and move the large sides of beef. 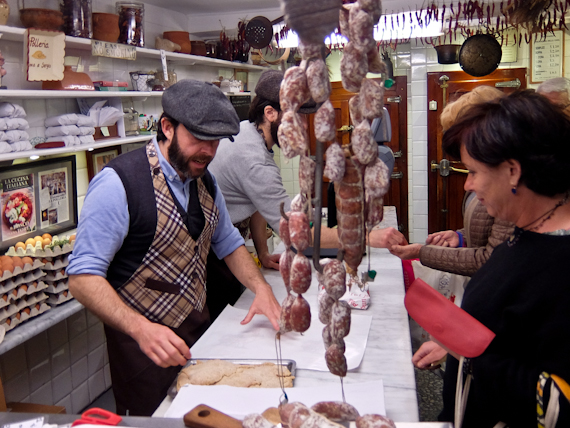 This poultry shop opened in 1910 and the fourth generation of the family, Matteo and Silvia Timossi, are still serving on the premises. Almost all of the decoration is original – there’s the massive wrought iron door with its geometric design, ceiling with meat hooks, white majolica tiles on the walls with Art Nouveau embellishments and a white marble counter inlaid with decorative diamond shapes. At the back are the wood and steel doors to the cold storage rooms where in the early days, blocks of ice were used to preserve the meat. 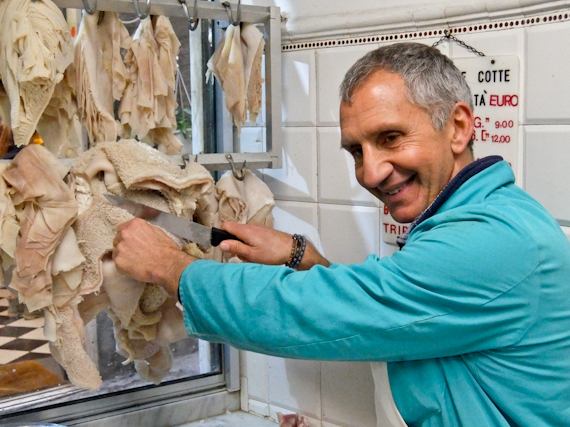 Tripe has been prepared and sold here since 1890 and stayed in the same family until 1984 when Gabriella Colombo and her husband Franco took over. Until about 50 years ago, workers and port employees would stop here on their way to work for a filling bowl of hot tripe soup at one of the marble tables. These days it’s takeaway only but everything is still prepared on the premises.  Inside there’s still the original fireplace, framed by small brown majolica tiles and copper pots and pans dangling from the oven hood. 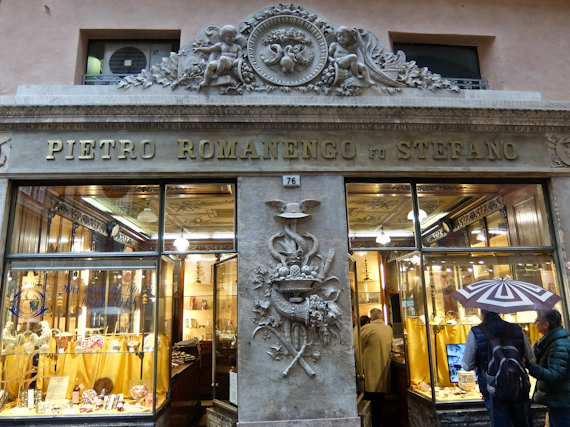 This sweet shop, selling candied fruit, sugared almonds, bon bons and chocolates opened in 1814. The interior was modelled on Parisian confectioners’ shops and retains its original layout and decor: polychrome marble floor, frescoed ceiling with chandeliers, inlaid rosewood shelving and counters, mirrors and an attractive marble sink in the form of a shell. Illustrious patrons of the past include the Duchess of Galliera, the Doria family, the Duchess of Parma, the Savoys and Giuseppe Verdi. 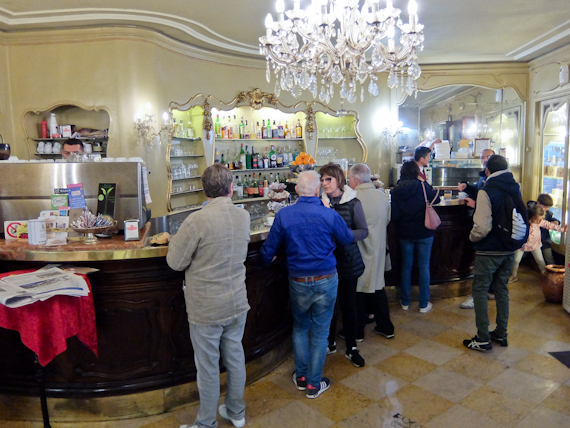 The Klainguti brothers, Swiss confectioners from Pontresina, opened this cake shop in 1828 by who came to Genoa intending to leave for America. They never left and still sell cakes called Engadina, Zena and Sacripantina, delicate pastries, jellies and almond biscuits. There’s even a special brioche called Falstaff created for composer Giuseppe Verdi, who lived around the corner. The interior features ivory, green and gold woodwork as well as mirrors, stuccoes and chandeliers reminiscent of the Belle Époque. 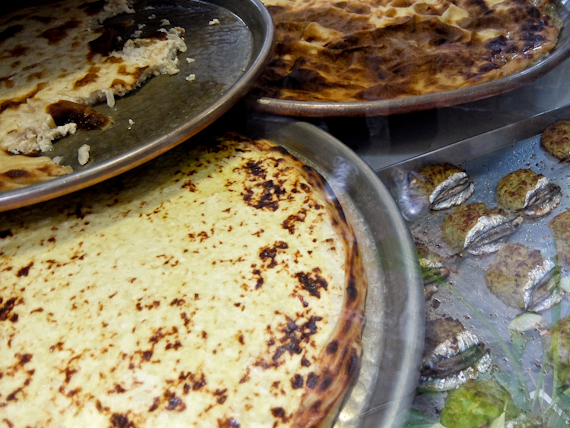 This Trattoria opened for business at the start of the 19th century and the interior has splendid barrel and cruciform vaults, tiled floor, wooden tables and stools, and white tiles on the walls and on the outside of the two wood-burning brick ovens. Staples are farinata, the Genoese chickpea pancake and the vegetable pies made according to the traditional method using prescinsêua, curd cheese, and baked slowly in the wood-burning ovens. 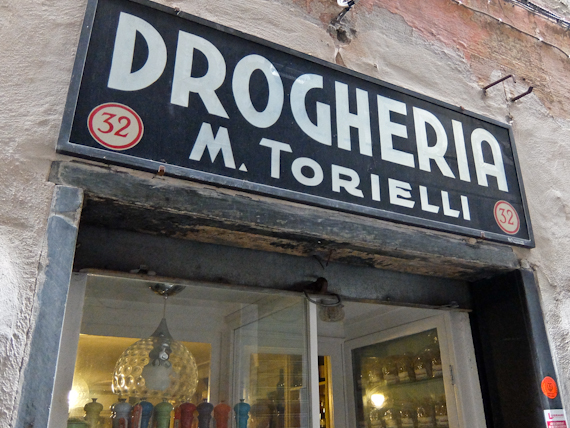 For over a century this shop has been full of the heady scent of more than 250 types of spices from five continents plus tea, coffee, honey, chocolate, sweets, essences and extracts, all kept in glass jars with handwritten labels. Furnishings are from the turn of the 20th century with an Art Nouveau white lacquered wood counter and display shelves stacked with spices used by ancient apothecaries. The shop was taken over in 1930 by Mathilde Torielli and her grandchildren, Antonella and Rosanna carry on the tradition. 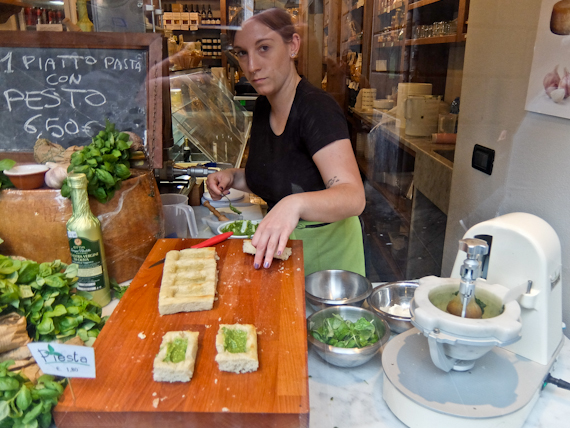 Unlike the others, this is relatively recent, founded by Luciano Pirlo to showcase the typical Ligurian pesto. In the window, there’s an electric mortar forever grinding out the green sauce, fed by a shop assistant with pine nuts, garlic, olive oil and parmesan. If you can’t wait until you get home, then they sell Piesa, focaccia with dollops of the freshest pesto and it’s delicious.

It’s hungry work wondering the streets and lunch beckons in one of the historic trattorias. I’m spoilt for choice and I can’t decide between Cavour 21 or the Trattoria delle Grazie. Instead, since I’m here for fish, I opt for the Trattoria da Rina, a relative newcomer as it was only opened in 1946. 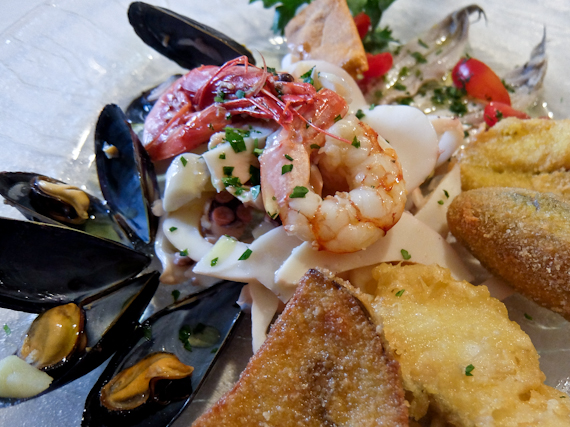 The steamed seafood salad is a mixture of the freshest cuttlefish, squid, octopus, mussels and prawns. It’s followed by Ligurian croaker, baked in the oven with potatoes, pine nuts, olives and white wine. I take my time, after all the event I’m here for is called Slow Fish so it can wait…

Botteghe Storiche di Genova has more information about the shops.

Visit Genoa has information about the city.

Lamialiguria has information about the region.

Best Western City is a comfortable base in the old centre.

Ryanair and British Airways both fly direct to Genoa from London.