‘I am not eating fried chicken and donuts for breakfast,’ I said to my wife as we got ready to hit the road out of Houston. Local friends had said we absolutely have to eat at Lee’s Fried Chicken and Donuts for breakfast before we leave town. ‘I’ll just have an omelette.’

The previous night we’d eaten a fabulous meal at Radio Milano, the restaurant at our hotel in Houston’s CityCentre district, the Hotel Sorella. The chef, Jose Hernandez, is a Houston culinary genius, so we went for his tasting menu. One of the starters was, surprisingly, a Black Forest Gateau which, when you bit into it, revealed a totally unexpected center of squishy foie gras. So the thought of either fried chicken or donuts didn’t exactly appeal. Little did I know that half an hour later I’d be eating fried chicken in a donut… and calling for more. 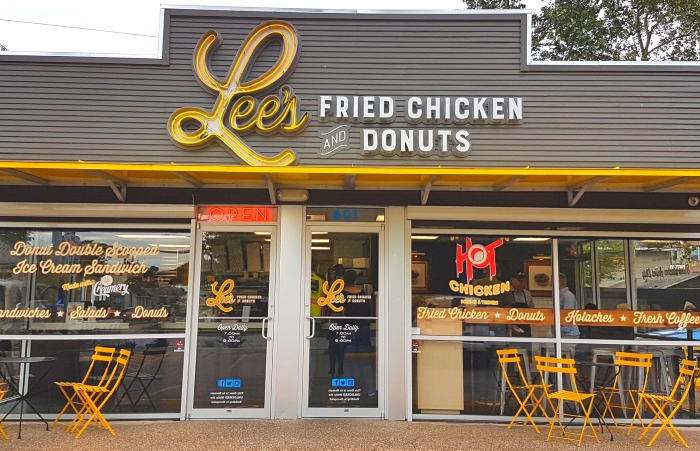 We asked the waitress for help, which she was able to give as we discovered that she also happened to be the owner.

‘Everything was made fresh this morning,’ she said. ‘Everything is made fresh every day. The chef gets in real early and starts making whatever she feels like making, whatever she’s in the mood for. The only thing we don’t make on the premises is the ketchup. Say, y’all want me to bring you a mixed plate so you can try some different things?’

That seemed a good idea and she returned a few minutes later with a tray filled with colourful donuts, some with equally colourful names. 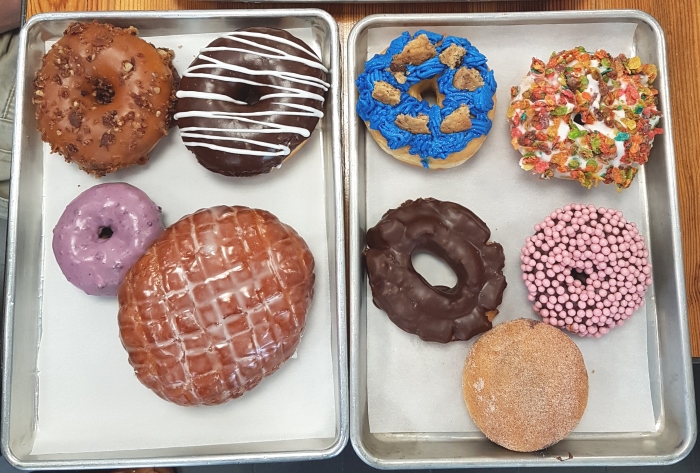 ‘That there’s a Bart Simpson, that’s a Cookie Monster donut. I brought you a cafe au lait to have with your coffee, and an apple fritter and a blueberry donut. The chef says that’s her dad’s favourite so y’all gotta try that one. And I brought you our specialty, the fried chicken in a donut. We also make a bacon jam to go with the fried chicken donut.’

Bacon jam? What the hell is bacon jam? We immediately forgot which donut was which, apart from the fried chicken which bulged its way out of the donut surrounding it as if trying to dip itself in the bacon jam. It was their special, it was huge, so I started with that one in case there wasn’t room later. If I got through half of my half of the donuts it would be a miracle.

I dipped it into the bacon jam and took a wary bite of the fried chicken donut. The chicken actually tasted of chicken, and the batter was equally light, as was the donut, and the savoury bacon jam tasted like… well, like a marmalade with a hint of bacon. In a strange way it was like the gourmet dish the night before where biting into what looked like a Black Forest Gateau produced a taste sensation. What seemed to be a fatty heart attack fast food snack turned out to be a combination of flavours that your palate thanked you for and then asked for more. 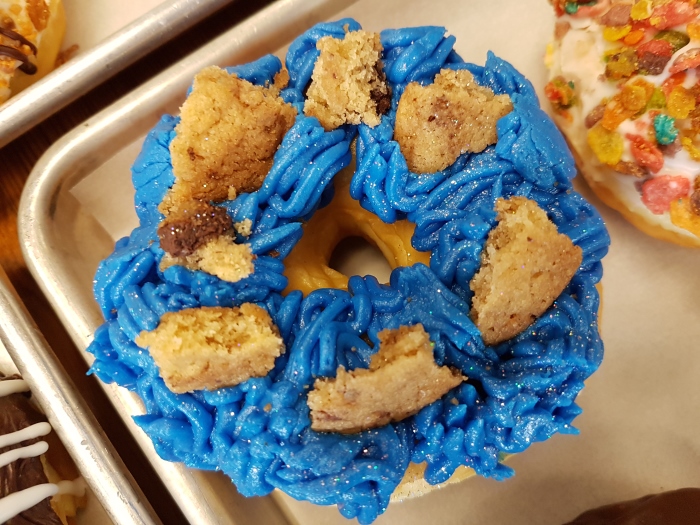 So we gave it more, and as we wiped the last smudge of chocolate strawberry donut from our lips, the waitress reappeared with another tray.

‘Why don’t you try some of our ice-cream donuts? We make all our own ice-cream too. Today we got chocolate ice-cream and strawberry cheesecake ice-cream, made with real strawberries.’

By now our stomachs were begging us to stop, but when faced with good food, and generous hospitality from people who love what they’re doing, how can you refuse? The ice-creams in a donut sounded every bit as bad but tasted every bit as good as fried chicken in a donut. 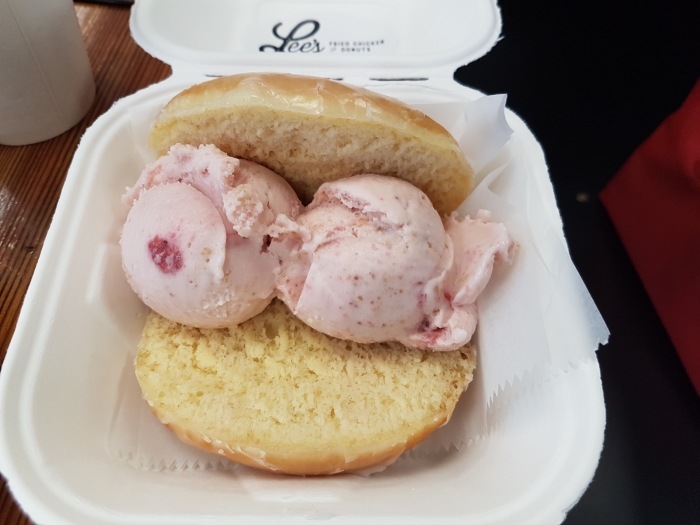 The chef, Alissa Dole, came out to say hello, just like a chef in a fine dining restaurant might do. She was surprisingly young and surprisingly trim. If I cooked food like this every day I’d have a belly like Buddha.

‘I just like to play around with flavours and combinations,’ she says. ‘And we listen to customer feedback and if they like it, we’ll keep it, and do things on rotation. We like to have some that are traditional, and then some that have a little more flair. At the moment we’re doing one, which is my favourite, that has mango and sardines in it, so you’ve got that sweet and salty taste in there. I love that combination of sweet and salty.’

Mango and sardines in a donut sounded even more bizarre than fried chicken in a donut. I’d been told that Houston has more than 10,000 restaurants, and that Houstonians dine out more times per week than residents of any other city in the USA. I’m not surprised. With places like Radio Milano for a gourmet dinner and humble diners like Lee’s Fried Chicken and Donuts serving the fast food equivalent of fine dining, if I lived there I’d never eat at home. And if you’ve never had fried chicken stuffed in a donut and dipped in bacon jam then, believe me, you haven’t lived.

Tell me more about  Lee’s Fried Chicken and Donuts

For information on Houston go to Visit Houston.

There are direct flights from London Heathrow to Houston on British Airways. Fly-drive holidays in Texas are available through Trailfinders.