Late morning and I’m joining in a mate tea ceremony in the shade of a tree in Plaza San Martín de Tours in Recoleta. This is serious stuff. No simple teacups handed out here. This is a ritual and there are very strict rules.

Mate (mah-tay) is a tea made from dried yerba leaves that has been a tea staple in Argentina since the 16th century when a gaucho’s diet consisted of just meat and mate. Enough anti-oxidants and caffeine there to keep them riding all day. These days you see everyone drinking it, particularly in late morning as a caffeine-induced pick me up. 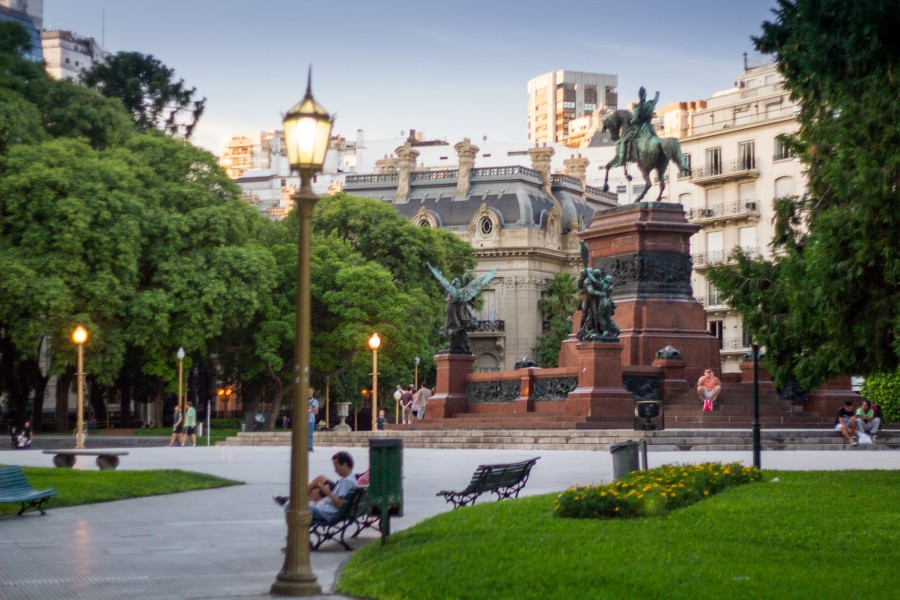 But it’s the ritual of it that’s so compelling. Sharing is mandatory.  The dried mate is put into a metal gourd container also confusingly called a mate and hot water is poured over it. Then a silver straw, a bombillia, is inserted and given to the person on the server’s right to suck up the mate until (and this is very important) the liquid is gone and all the assembled can hear the empty sucking sound. The mate is passed back to the server who pours more water in and hands it to the next person in the circle.

Full disclosure here; mate is an acquired taste it has to be said, and by my last suck, I feel like I’ve drunk more than a few double espressos. I am jumping.

Bueno Aires is a vibrant city with a Latino heart that never stops beating. Many of her buildings hark from the faded grandeur of 19th century Europe, but this only enhances her appeal. Her food scene is legendary – and these days its not just about carnivores – and who can resist a glass of Malbec or a dollop of dulce de leche? Music, tango, history and celebration. Buenos Aires has it all. Her barrios (neighbourhoods) are her beating heart so explore some of my personal favourites. 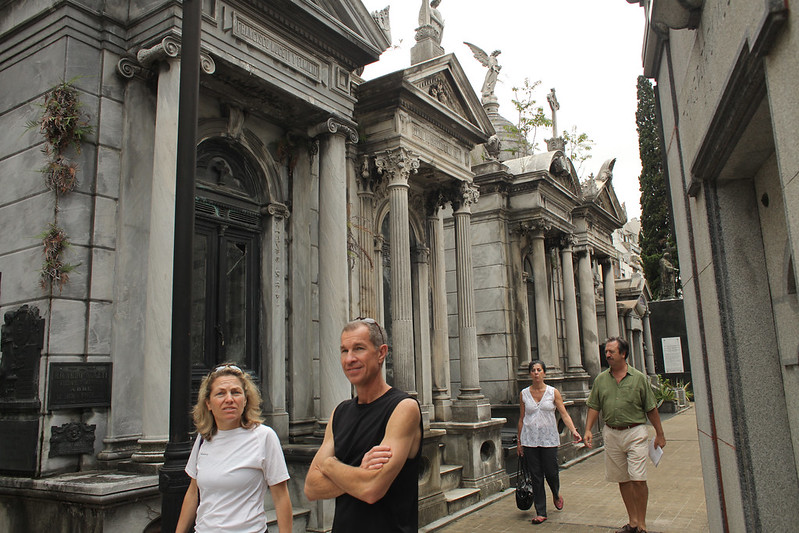 Recoleta is one of the most visited barrios in Bueno Aires, not for the fancy homes and hotels of wealthy porteños that line its avenues, but because of a cemetery. Recoleta Cemetery’s most famous resident is Eva Perón and she never fails to draw the crowds. That said, strolling the narrow lanes past the long lines of ornate mausoleums and tombs is like walking the very history of Argentina. But away from the tourists, the Recoleta Cultural Centre is an absolute breath of fresh air. 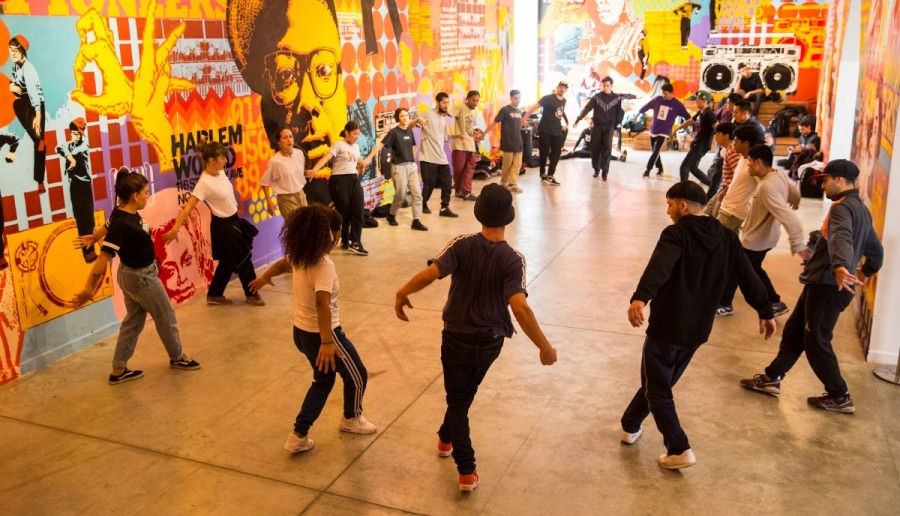 This huge space is a free-to-enter centre for young creative talent to express themselves through art, design, music and dance. Fully funded by the municipality, there’s no shortage of talent on display any day of the week. Don’t miss this. 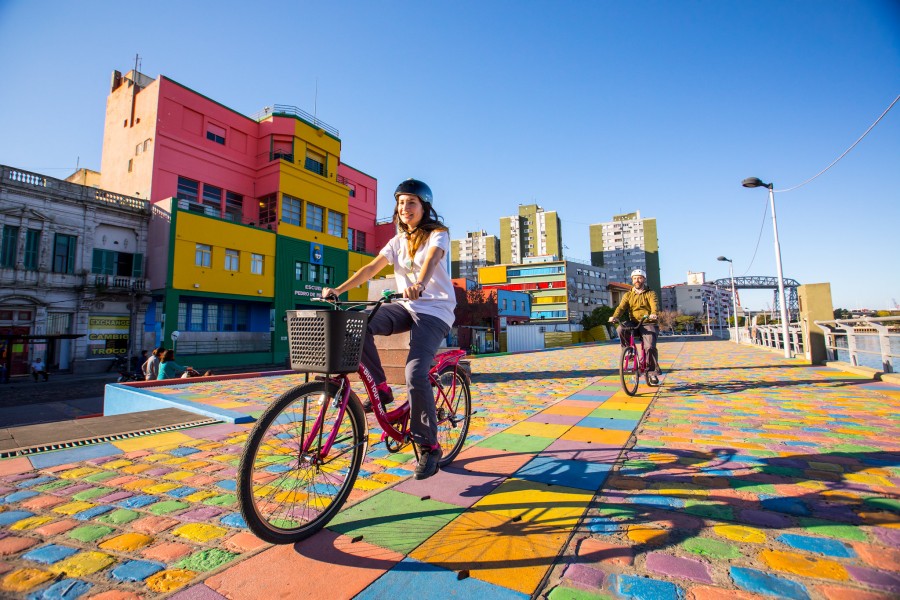 No visit to Buenos Aires is complete without visiting its oldest barrio. Today Boca is filled with the trappings of tourism, but it wasn’t always like this. In the 19th century, La Boca was a port town and shipyard born through migrant labour, particularly Italians from Genoa. These workers were so poor they had to construct their homes using thin patchwork pieces of corrugated iron scrap and painted them with whatever colours they could find from discarded paint pots – hence the colourful facades. Once the docks moved location the area was abandoned until the 1950s when local artist Benito Quinquela Martín, recognising how historic this barrio was, began a project to repaint many of the walls around Caminito Street and put on performances there. 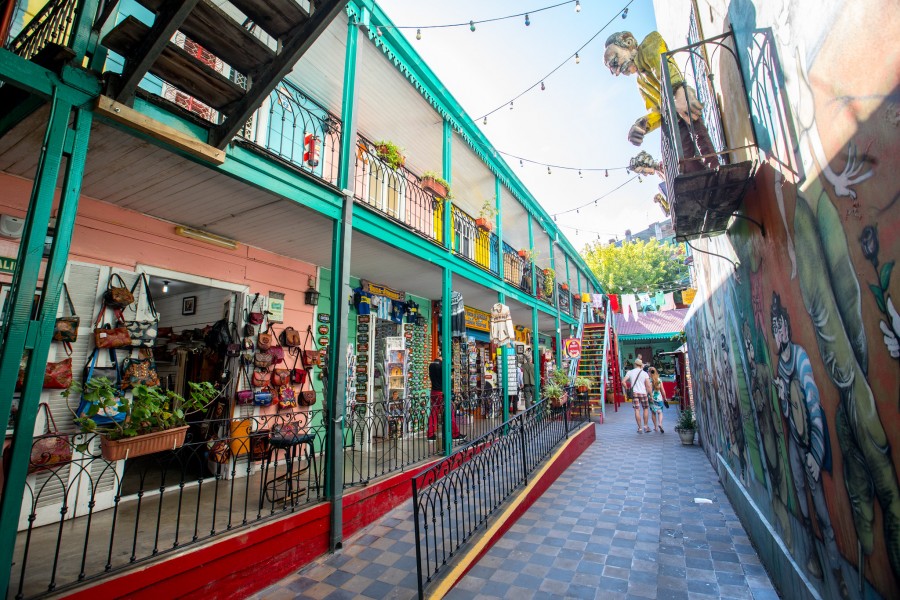 Pretty soon other artists followed and La Boca soon became a haven for tourists which naturally attracted hawkers, trinkets and touts. Caminito is still very commercial but underneath the tourist façade, this is still a working-class community and particularly edgy after dark. That said, it is an authentic reflection of how Boca’s migrant citizens lived and well worth a stroll around. 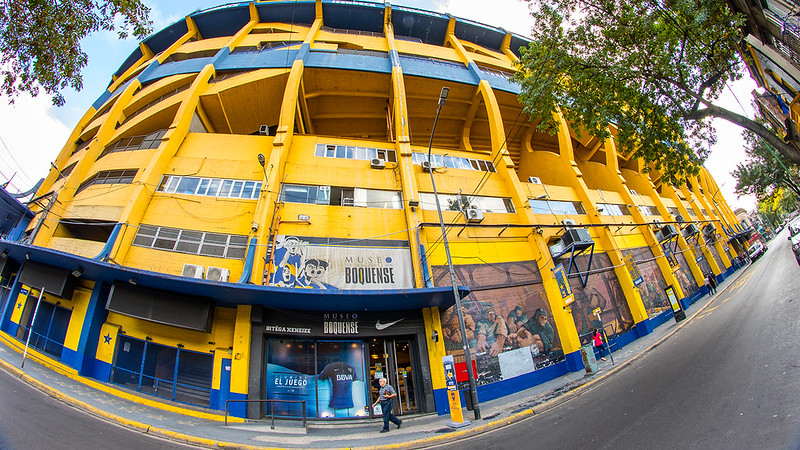 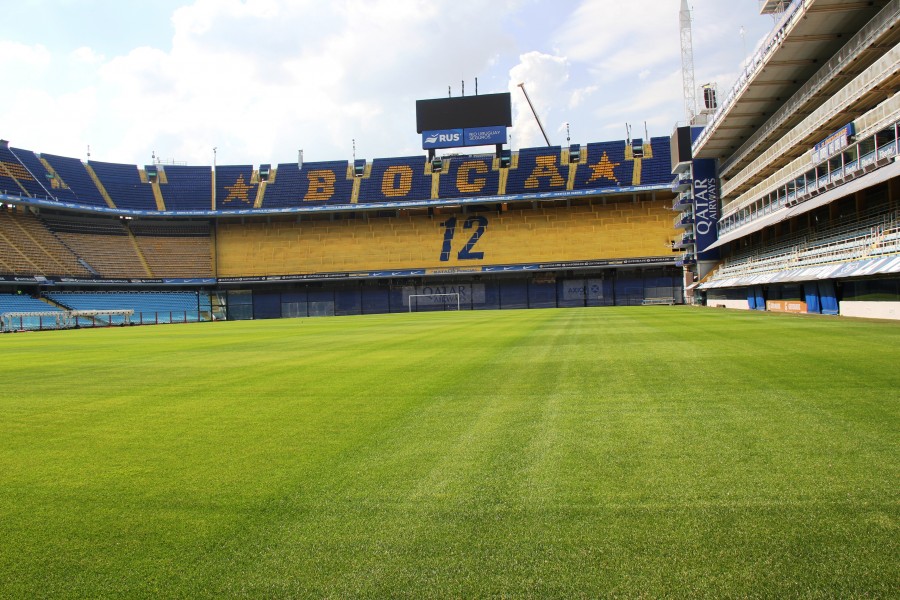 Boca’s Italian past is immortalised a few streets further back where, squeezed in-between the back streets lies the legendary La Bombonera or to give it its proper name the Estadio Alberto J. Armando, home of Boca Juniors Football Club. Founded by Italian immigrants, it became one of the most famous soccer clubs in the world primarily because of Maradona. You can take a stadium tour, visit the dressing rooms and walk on the pitch. For any football fan it doesn’t get much better than this.

Holding hands with La Boca, San Telmo, named after the patron saint of seafarers, shares a similar history but far less touristic. Ironically, from its migrant dockworker origins in the 18th century, it became a wealthy suburb once cobblestones and electricity were installed; the many faded fancy mansions lining the streets are a testimony to that. After a cholera epidemic, her well-heeled citizens fled for barrios new leaving behind plenty of space for a new wave of European migrants to move in and create an arty bohemian feel to the place. 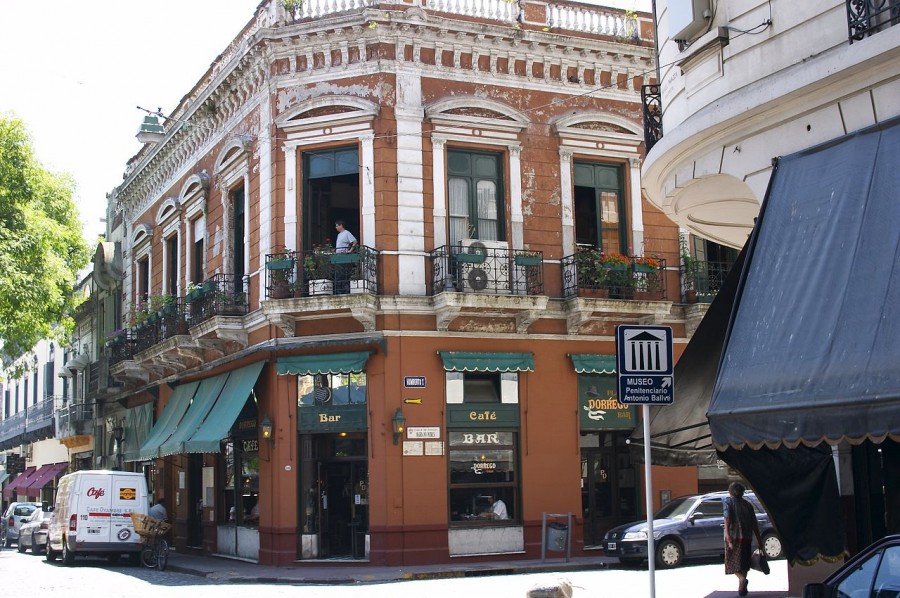 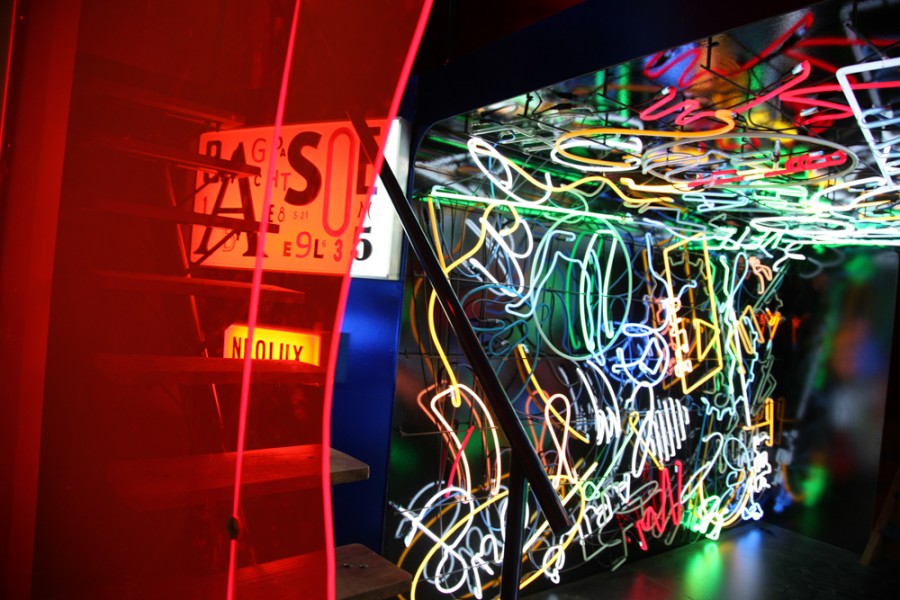 Today San Telmo is a haven of antique shops and art galleries. Each Sunday Calle Defensa is transformed into an outdoor marketplace for antiques and street performances. It’s also home to the quite wonderful Buenos Aires Museum of Modern Art or MAMBA as it’s known locally. Housed in a former tobacco factory, it celebrates Argentine modern art through the decades of the 20th and 21st centuries with 7,000 permanent pieces and numerous brilliantly conceived temporary exhibitions.

Buenos Aires’ newest barrio has been transformed from a run-down dockland into a gentrified waterfront with restaurants, coffee bars and fancy apartments. But for me, the jewel in the crown is the wetland island that is the Costanera Sur Ecological Reserve  Nearly 900 acres of open green space that is home to over 300 different birds and wildlife and thousands of species of flora and fauna. 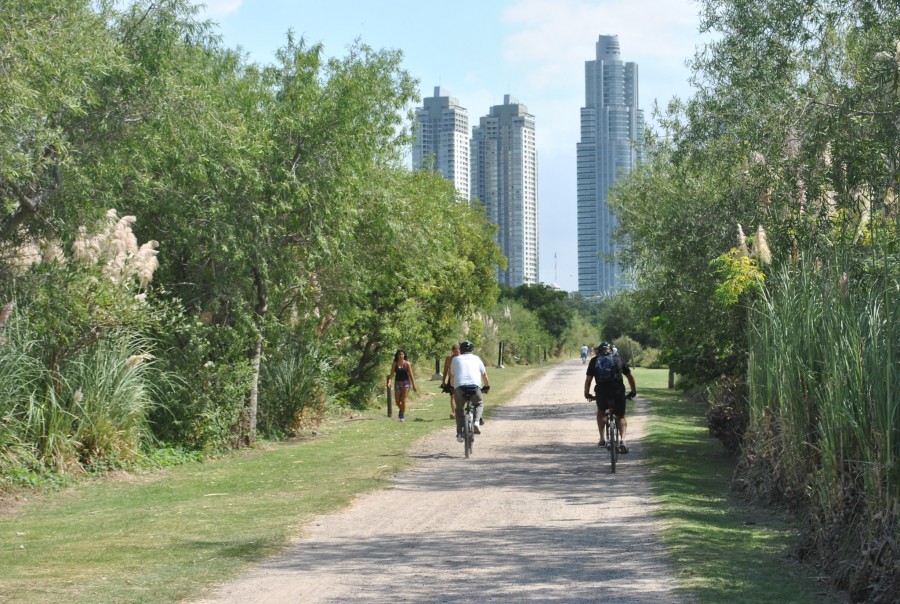 This wetland space is all the more extraordinary as it came about purely by accident. During the redevelopment of the city in the mid 20th century, rubble from demolished buildings was dumped in the River Plate and over time the debris mixed with sand from the river and created the marshland island we see today. The reserve is a regular haunt for joggers, walkers, cyclists and naturalists and a wonderful woodland stroll down to the river. 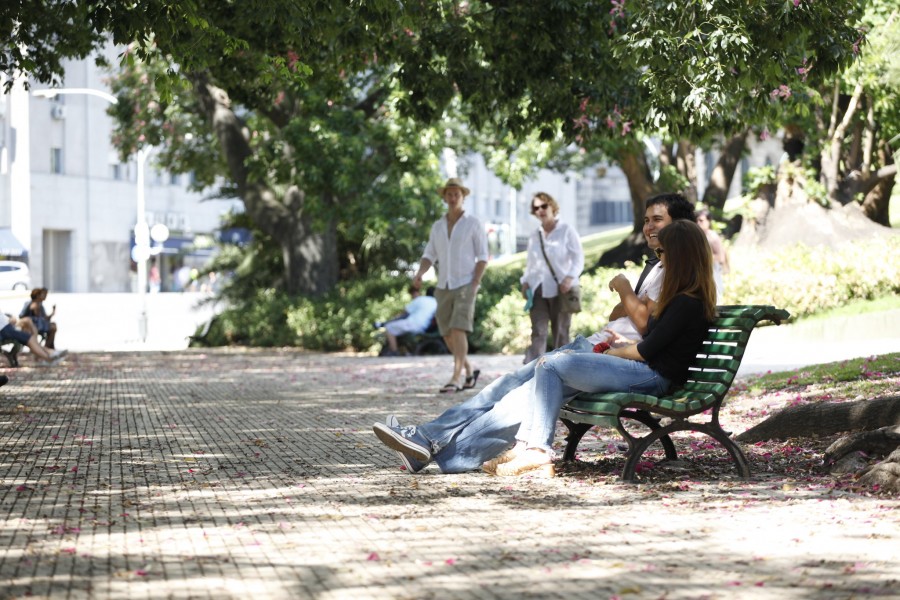 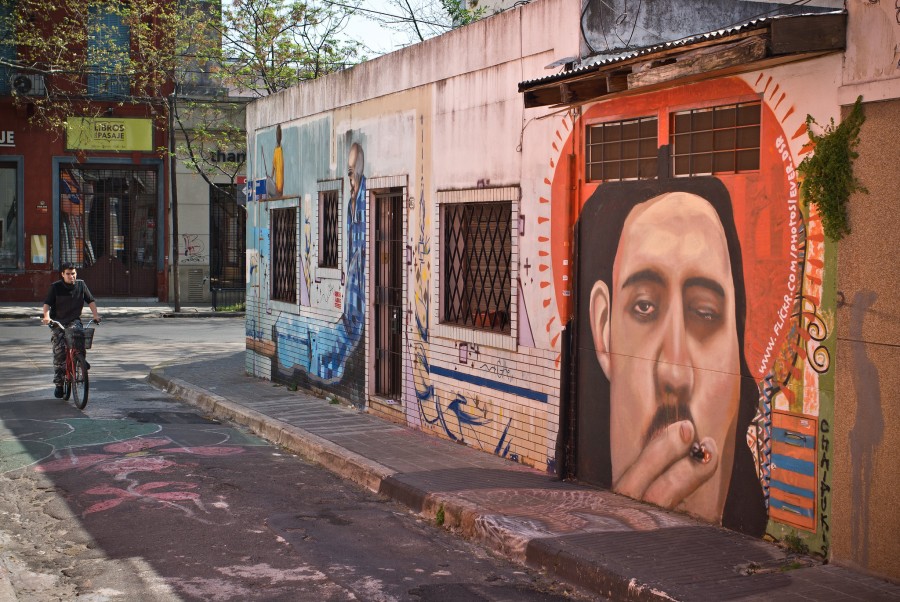 The city’s largest barrio is the embodiment of Buenos Aires’ middle classes. This is hipster central. The cool restaurants and bars, trendy stores and large grassy parks are a magnet for foodies, shoppers and people-watchers particularly in Plaza Armenia and Plaza Serrano. Explore the old cobbled passageways for plenty of examples of street art – everything from freestyle to stencil style. Here too is one of the finest bookshops in the world – El Ateneo Grand Splendid. In our digital age, bookshops may seem to be on the wane, but in Buenos Aires, nothing is further from the truth. Porteños are obsessed with reading books and there are close to 400 bookshops in the city, none finer than this one which was once an ornate theatre dating back to 1912. 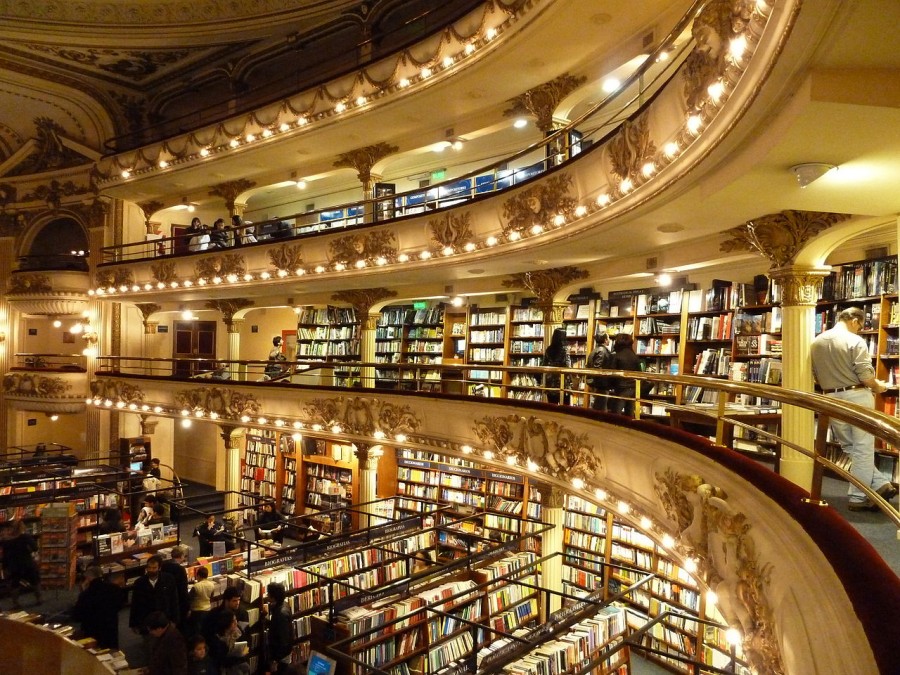 One more highlight for me, which technically isn’t in Palermo, but it’s near enough in next door Almagro. The Ciudad Cultural Konax is the venue for Bomba de Tiempo, an extraordinary percussion group that has performed live there every Monday night for the last 12 years.  This 16-piece percussion band improvises in real-time using over 100 different signals provided by different band members who take turns conducting. 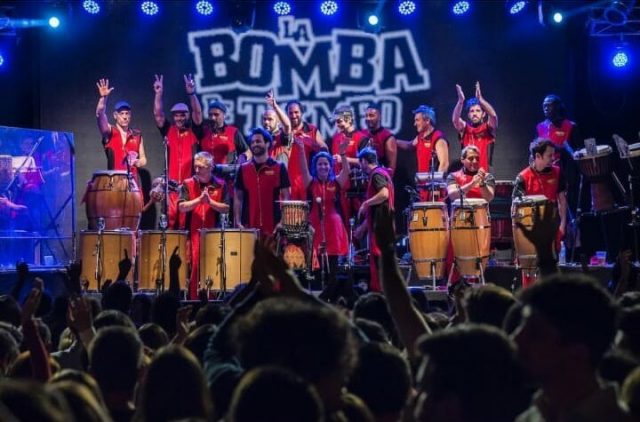 Every show is different, and they play to packed out audiences every week. It has to be seen to be believed.

Tell me more about Buenos Aires

Where to stay in Buenos Aires

The NH Collection Hotel in Centro histórico is tucked away in a semi-pedestrianised road right next to the Bolivar metro and a stone’s throw from La Manzana de las Luces. It’s a beautiful area in the Monserrat neighbourhood and close to all of the major attractions in the city. The rooms are spacious and elegant with hardwood floors, king beds and espresso machines. In summer the rooftop outdoor pool is open with poolside service and a stunning cityscape and there’s a shady terrace by the 12th-floor restaurant.

Buenos Aires is a popular stopping off point for a few days before flying down to Ushuaia to board a cruise to Antarctica. Follow Andy’s adventures as he sailed to Antarctica with Ponant.

Getting to Buenos Aires