Stuart Forster takes a look at some of the reasons to make visiting Gotha in the east German state of Thuringia very worthwhile.

A football pitch, perhaps even a couple of them, could fit into the courtyard of Friedenstein Palace in Gotha, Germany.

The Early Baroque structure, constructed over a dozen years, from 1643 onwards, is one of the largest buildings of its type in the world.

Friedenstein Palace dominates Gotha. Situated on a hilltop overlooking the city, the entrance to the historic landmark bears a coat of arms depicting two women kissing. 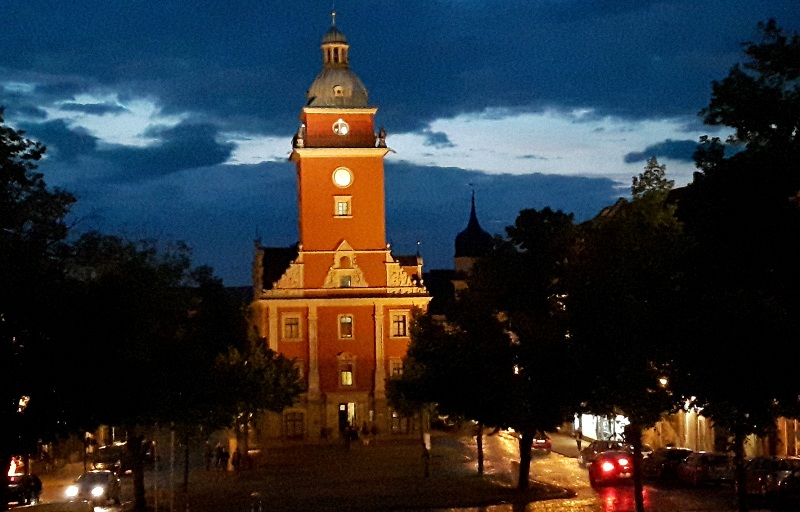 Wearing flowing red and blue robes and with hair tumbling they depict Justice and Peace. Ernest I, the Duke of Saxe-Gotha, the ruler who became known as Ernest the Pious, ordered the palace to be built as the Thirty Years War was entering its closing stages—the coat of arms is symbolic of the hopes of the age.

Surprisingly few Britons have visited Gotha yet the city’s historic links with the United Kingdom are strong. Prince Albert of Saxe-Coburg-Gotha became the consort of Queen Victoria.

Tom Hughes recently cut a dashing figure playing the prince in the 2016 mini-series Victoria, opposite Jenna Coleman, who starred as the eponymous princess, queen and emperor.

Inside the palace museum I learn about the persistent match-making by the King of the Belgians that led to Victoria and Albert becoming a couple. 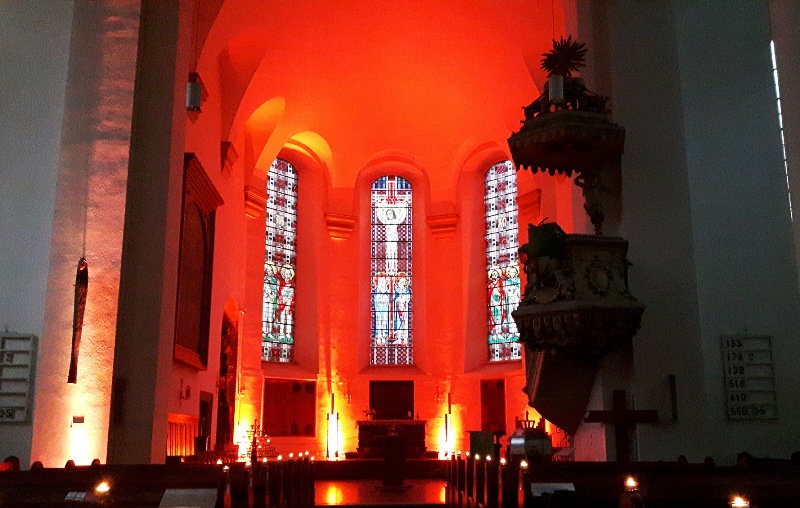 Victoria’s mother hailed from Coburg and was the sister of Albert’s father, making them cousins. Eventually Victoria proposed to Albert. Court etiquette, relating to rank, dictated that she was the one who popped the question.

Yet Albert’s popularity in Great Britain grew only with his role in organising the Great Exhibition of 1851.

Oil paintings within the palace depict their ancestor, Ernest the Pious, with a Van Dyke beard and moustache and flowing locks. He was one of the first European rulers to emphasise the importance of education, ensuring five to 12 year olds were schooled in German rather than Latin or Greek.

An early example of an Enlightenment ruler, Ernest’s court made progress in the understanding of porcelain manufacturing and fruit. The Ernestine Dynasty, to whom he belongs, had monarchs on thrones across Europe at the beginning of the 20th century. 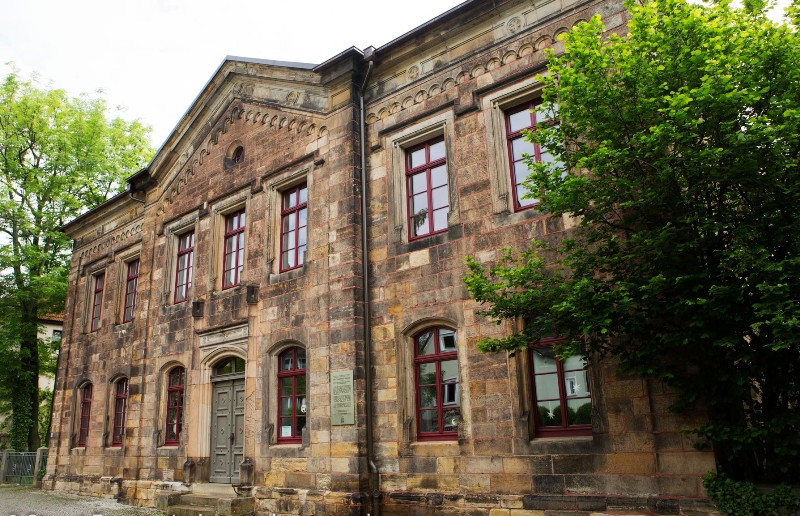 Believe it or not, It would be easy to spend the best part of a day wandering around the vast palace. Its restored state rooms provide insights as to how the interiors of the palace looked when the building was still a seat of royal power.

The audience chamber provides views over the land that once formed part of the Duchy of Saxe-Coburg-Gotha and, of course, was designed to impress visitors.

The walls of the waiting room depict the Order of the Elephant, an honour bestowed on the duchy’s rulers by the King of Denmark.

One of the highlights of a visit to Friedenstein Palace is taking a peek inside the Ekhof Theatre, the world’s oldest Baroque theatre with functioning stage machinery.

During World War Two motor parts were stored in the theatre, which is named after Conrad Ekhof, the man known as the father of German acting.

You can also see one of Napoleon Bonaparte’s hats in the palace—the diminutive dictator stayed in the Turkish room while visiting Gotha. 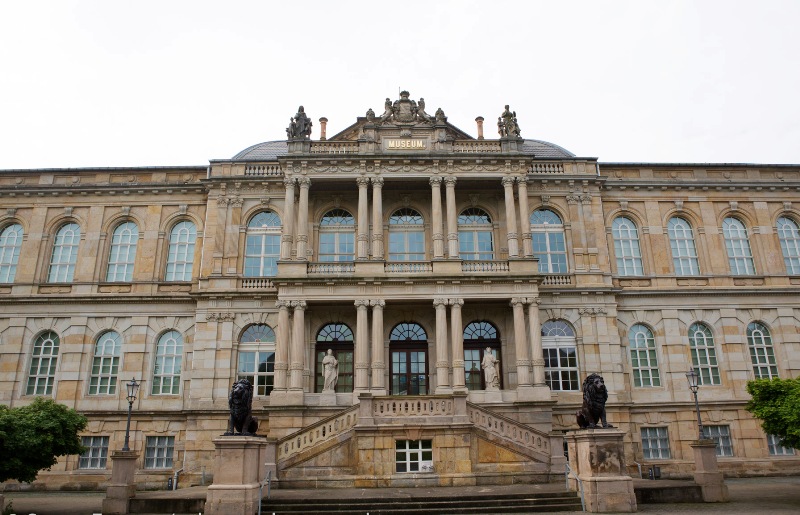 The Ducal Museum, in a grand, Neo-Renaissance building constructed from 1864 to 1879, was ordered by Prince Albert’s brother, Ernest II. It displays art and curiosities that, over centuries, were collected by the duchy’s rulers.

With around 140 mummies it has an outstanding collection of Egyptian artefacts plus artworks including oil paintings by Lucas Cranach the Elder and Caspar David Friedrich.

Thanks to Prince Albert’s connections in an empire with increasing power and influence in East Asia, the collection also holds an array of decorative items from Japan.

The museum’s collection of Meissen porcelain, ornate fans and Jean-Antoine Houdon plaster of Paris sculptures were, for me, eclipsed by the fascinating, intricate detail of cork models.

Ruins of historic buildings in Rome were recreated in miniature and sold to the gentlemen and scholars on their Grand Tour of Europe, a form of tourism once deemed an essential element of any properly completed Classical education.

To round off my tour of Gotha, I decide to wander through the park to take a look at the town centre. If I hurry I’ll catch the carillon playing on the town hall to mark the full hour.

Tell me more about visiting Gotha

See the Cultural Heart of Germany webiste for information about Thuringia and neighbouring states, including Saxony-Anhalt and Saxony.

The Visit Thuringia website is a good source of information about Thuringia. The Germany Travel site has ideas for travel across the country as a whole.

Don’t miss this when visiting  Gotha

The historic attractions of Gotha among the key draws of the compact Thuringian city. Find out more about them by visiting the Friedenstein Palace website,

If you enjoy Baroque theatre, make sure you visit during the Ekhof Festival  held each summer.

Take a stroll through the Schlosspark, the Palace Park, which was the first English style park to be landscaped outside of the United Kingdom.

What to Eat when visiting Gotha

For a selection of traditional Thuringian cuisine—including sausages, grilled meats and Klose dumplings—book a table in the Romantic-Restaurant Pagenhaus (tel. 0049 3621 403612).

Where to stay in Gotha 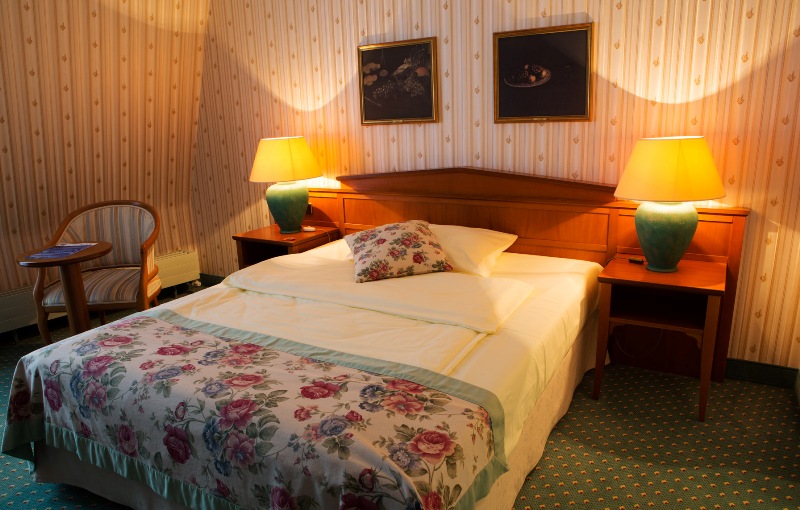 Stuart stayed at the 94-room Hotel am Schlosspark Gotha a four-star superior property with wellness and conference facilities, in addition to a bar and restaurants serving regional and international cuisine. The hotel is located within easy walking distance of the city centre on a street opposite the landscaped Friedenstein Park. See the hotel website for room rates and to make a reservation.

A number of Airlines, including British Airways, KLM and Lufthansa fly from Airports in the United Kingdom and Berlin.

From Berlin, Deutsche Bahn trains provide an easy way of exploring the Cultural Heart of Germany. Gotha is around 325km south-west of the German capital, within easy reach of a number of attractive cities, including Dresden, Leipzig and Erfurt.