Mountains, mines, deserted beaches and the only vineyard in the Caribbean   – there is a side to the Dominican Republic most tourists don’t know about. Judith Baker takes to the country’s roads less travelled.

The Dominican Republic is known for its all-inclusive East Coast resorts.  But away from the busy beaches, the country has some well-kept secrets, especially in its beautiful South. A round trip from the capital city of Santo Domingo reveals some Caribbean surprises.

I am sitting in a rustic sun-drenched vineyard with a glass of fine Tempranillo paired with a crumbly white goat’s cheese. This could be in Spain, except tropical palms sway behind me and to my right crash the waves of the Caribbean Sea.

Ocoa Bay is the only vineyard in the Caribbean. Found in Azua about one and a half hours from the Dominican Republic’s capital Santo Domingo, its position between the Central Mountains and the sea has a dry climate perfect for cultivating grapes. The wine tasting continues with a French Colombard of a quality to satisfy any connoisseur. 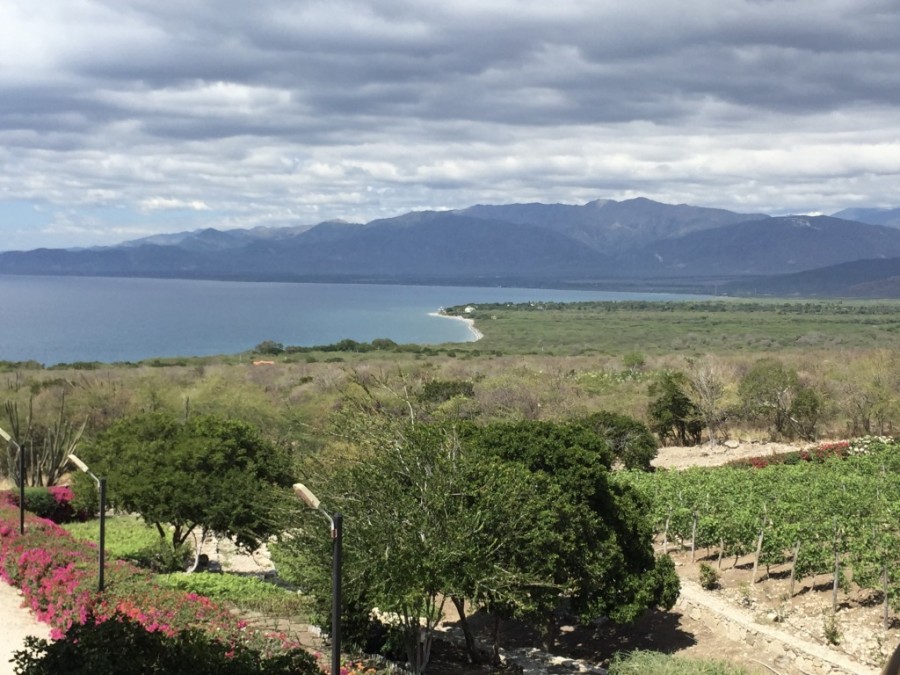 Maria Claudia and Guillermo Mallarino left careers as oncologists in the USA when they fell in love with this location.  ‘We noticed vines growing in gardens’ says Maria Claudia ‘The climate is the same as California so it seemed natural that wine could be produced here’. That has been happening for three years on the 27-acre sustainably-run plot and the couple have plans to open villas and a vineyard hotel.

The vineyard is just one of many surprises found west of Santo Domingo.  The scenery changes as we edge further south where it becomes an arid cacti-lined landscape. It is a long, bumpy drive down to the Parque Nacional Jaragua and Bahia de las Aguilas on the border with Haiti, the Dominican Republic’s long-suffering neighbour with which it shares the island of Hispaniola. This is the only island in the world that is shared by two countries.

But once on the South coast in the Bahia de las Aguilas we find some of the finest beaches in the Caribbean only accessible by small boat. And most of them are deserted apart from butterflies and lizards.

I am staying at the Eco Del Mar eco-lodge, a small laid-back beachfront resort with both simple tents and luxury cabanas. 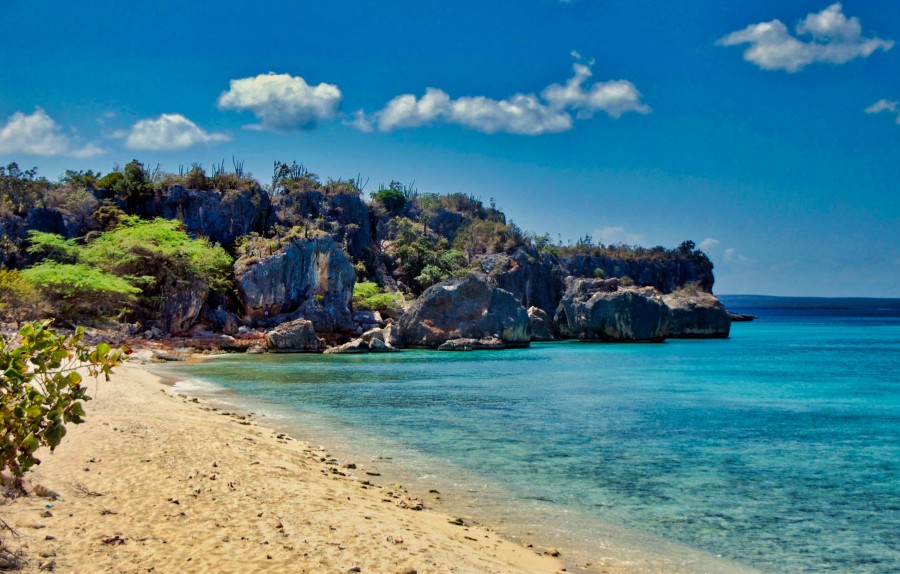 There is no Wi-Fi and your phone may not work that well, but that means no distractions from star gazing or sampling the lodge’s rum cocktails and coconut-crusted red snapper. ‘We have something luxury hotels don’t ‘says Eco Del Mar’s manager Mario waving an arm at the little bar set right on the sand, the simple hammocks and the glittering sea.

This is one of just two hotels in a closely protected area.  There are plans to increase tourism to some parts of the untouched South but Mario insists no new development will happen here. The Jaragua National Park is home to hundreds of endemic species and visitors can spot flamingos, pelicans, manatees and turtles.

At the noisy, dusty market in Pedernales, right on the Haitian border, large sacks of food and clothing are bought and sold and then carried over the bridge to Haiti on motorbikes or just on heads.

We make our way to the forgotten province of Barahona passing tiny villages with wooden homes where nothing seems to happen. At Los Patos, the country’s shortest river, local people are cooling off in the water as we sit next to the almond trees enjoying a crab stew. 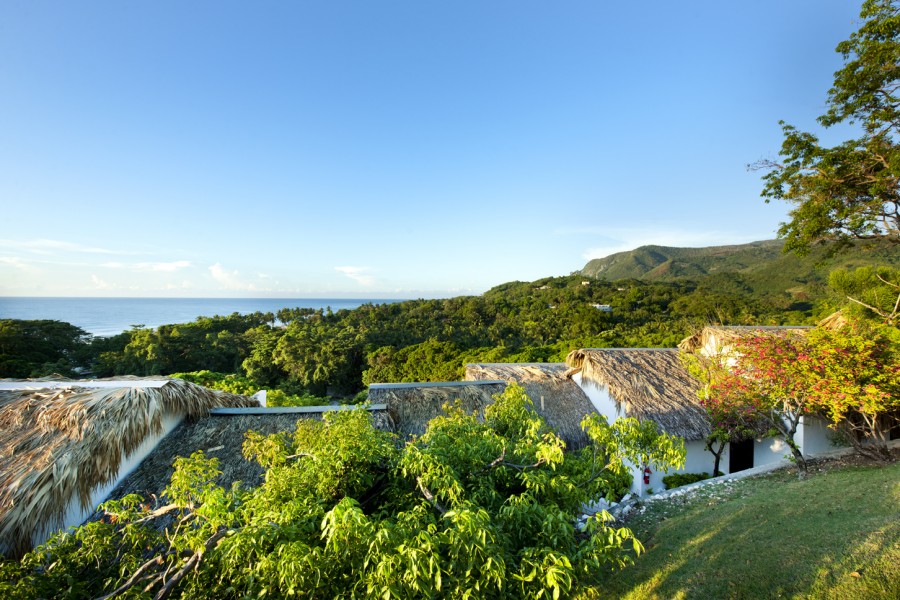 But there is luxury to be found here. Casa Bonita Tropical Lodge is a boutique resort tucked in the heart of the rainforest. Formerly a private home the pretty 18 room hideaway has a canopy tour of the jungle and rooms have views of the Caribbean Sea or the Sierra Barahuco mountains.

Barahona is the only place in the world where they mine Larimar, a semi-precious stone the colour of the ocean.  Locals say larimar can heal a broken heart. You can visit the mine and at  Casa Bonita’s Tamana spa masseuse Miranda uses it as part of a unique experience where she stands with her feet in the river as I lie on a bed with the water rushing beneath me. 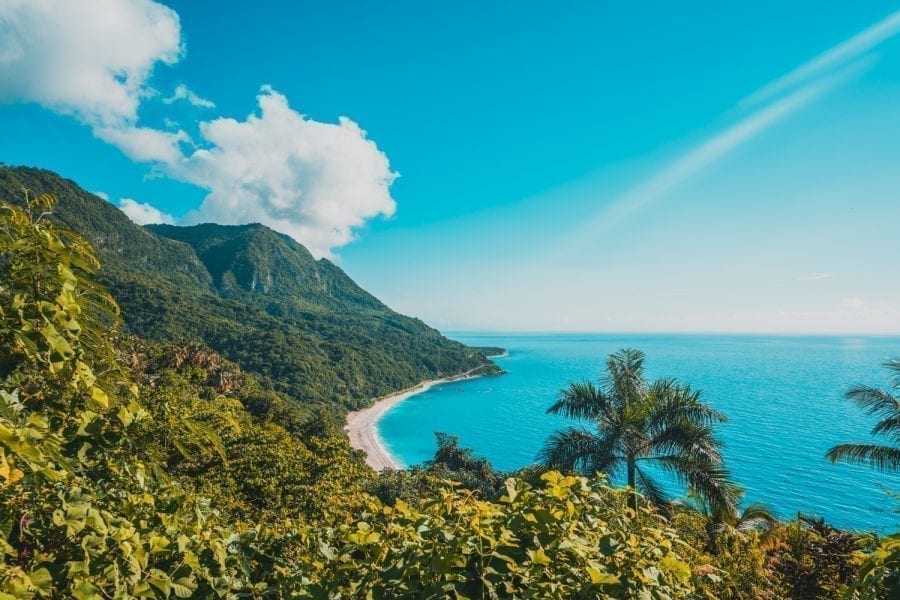 From Casa Bonita, it is a relatively smooth drive back to Santo Domingo – the oldest city in the New World founded in 1496 by Christopher Columbus’ brother. One of the Caribbean’s most interesting cities, its colonial old town with limestone 16th-century buildings boasts the first cathedral, the first monastery and the first hospital built in the Americas.  Santo Domingo also has the first metro system in the Caribbean but I prefer to explore on foot especially along the cobbles of Calle las Damas (Ladies ‘street) which got its name in 1509 when Maria Del Toledo, wife of Diego Columbus, stepped out with the fashionable wives and girlfriends of the day.

To get into the role, I am staying at the unusual Casas XIV in the heart of the Zona Colonial. The hotel is found in a series of renovated 16th-century houses.  Entering my home for the night in Casa Del Pozo is to step back in time into this former convent filled with antiques and artworks with a courtyard featuring the original well.

Tell me more about the Dominican Republic

Iberia flies to Santo Domingo from London Heathrow via Madrid from about £600 return www.iberia.com