Tucked away in a non-descript side road in Atlanta’s midtown lies a little bit of southern heaven on a plate. South City Kitchen may be hidden away but the food here is not bashful in the slightest, loud enough it seems to come to the ear of notable Atlanta clientele such as Usher and the cast of The Hunger Games.

This is where you get modern southern style cooking that lets the taste do all the work and leaves pretension outside the door. That’s not to say its not smart and savvy by any means. Service is tip top and carries an air of confidence that comes with knowing you are on to a winner here.

I mean who wouldn’t want to indulge in a starter of fried green tomatoes (about as southern as it gets) but with goats cheese, a red pepper coulis and basil at $8.50 or chicken livers, country ham, caramelised onions, brioche, creamed corn and a garlic jus for $8.

I casually ask about a special and get a reply “well, there’s just a Brunswick stew on if you like.” Not having the faintest idea what a Brunswick stew was I was reliably informed it was what ever the chef wanted it to be, so I threw caution to the wind and plunged in. 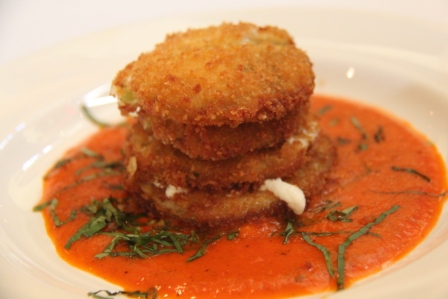 I am now a convert of everything Brunswick. Just a fabulous concoction of slo-cooked meat and veg that melted in the mouth.

For less adventurous diners there are standard southern fare sandwiches like bbq pulled pork with horseradish coleslaw, Catfish Rueben on rye with said slaw, and my favourite, slow smoked roasted beef with Worcestershire jus, pickled banana peppers, white cheddar and horseradish cream at £12. The star of the mains for me was an epic grilled salmon with collard green kimchi, red quinoa and orange Tupelo honey at $16. 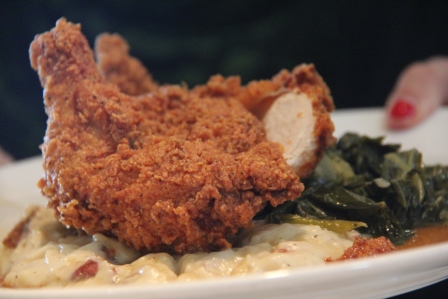 As you can gather, by now I had given up looking for faults and just let myself enjoy the South City Kitchen hospitality. Executive Chef Chip Ulbrich must have been a southern settler in a previous life to concoct such a mix of authentic dishes with startlingly unusual mixers that really work perfectly together. Even the sides like mac-and-cheese or roast cauliflower with Fresno chillies are a surprise.

The South City Kitchen experience proves you can be immensely popular without charging eye-watering prices.  For me I’ll just take another bowl of that Brunswick stew.