The Arabian Gulf’s first-ever beachside golf course is certainly worthy of the high esteem it’s held in around these parts.

Part of Abu Dhabi’s triumvirate of impressive courses – Yas Island and Abu Dhabi National are just as good – this Emirate is something of a golfing mecca if you pardon the pun.

This Troon-Managed Gary Player designed course has all the hallmarks of tough Scottish links but the benefits of not having to battle some the infamous Scottish weather. Although having said that, I turned up to play and the course was covered in early morning fog, a weather feature not uncommon in the UAE.

Once the fog lifted it was clear this was going to be a good test and it didn’t disappoint. Festooned with bunkers (Gary Player does like his bunkers) huge sandy waste areas, water and very fast greens it’s a tough nut to crack, particularly at over 7,800 yards from the back tees. Fortunately, there are four other tees so plenty of appeal for all skill levels. 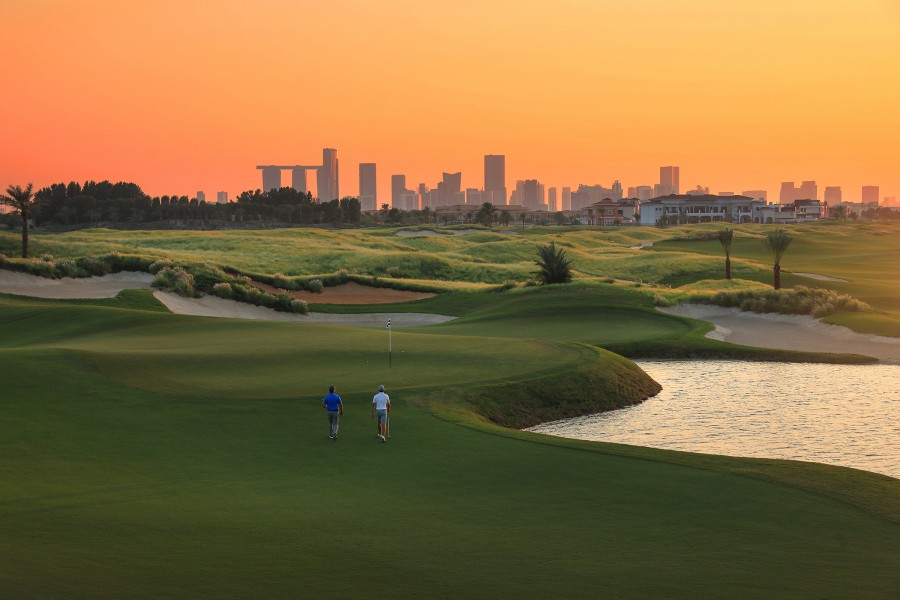 With so many potential pitfalls to ruin a card, this is a course that rewards careful plotting. The fairways are generous but there’s no point in brutal smashing from the tee because there are so many ways to fail. The huge sandy areas are deceptive so unless you know the course well it pays to be cautious.

The course is lined with impressive properties and a number of high-end hotels such as the Rixos resort but the estate is big enough to cope with the development and doesn’t detract from the quality of the course. That said, the fifth to the tenth holes are all along the Gulf and some of the views are pretty special. My particular favourite is the par 3 sixth, an absolute stunner. Named Saadiyat Breeze for obvious reasons, with a stiff breeze coming in from the sea, it’s a hefty 236 yards of the back tees and 170 yards off the white, sand dunes all around and the azure waters of the Gulf running all along the left with the raised green surrounded by deep pristine white bunkers. 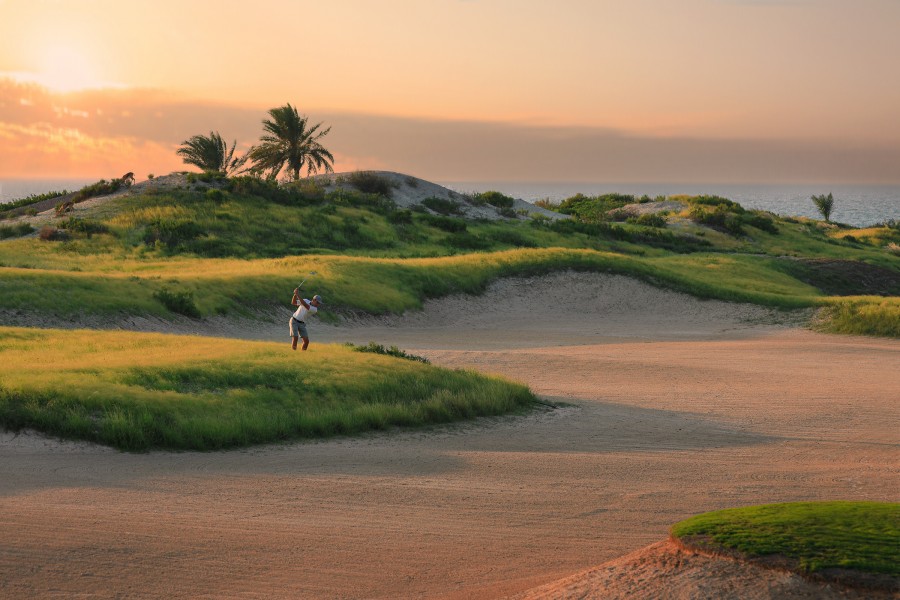 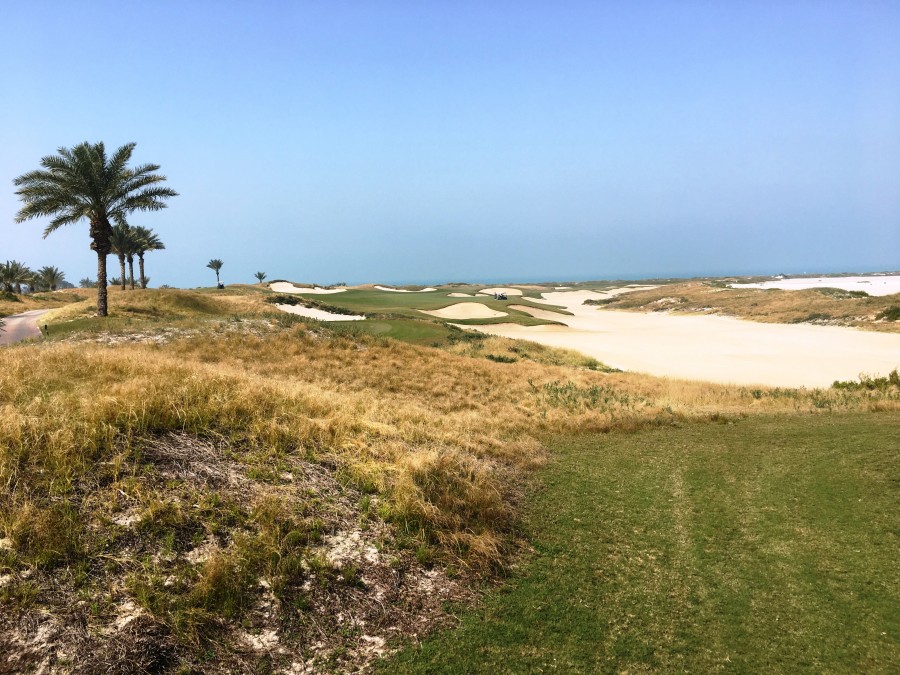 It’s a rather surreal journey from the green to the seventh tee. You pick your way through the St Regis Hotel Beach Club, beach sun loungers to the left, beach bar and pool to the right.

Another memorable hole is the tenth. Called The Mousetrap, it’s a cunningly short par 4 of just 338 yards from the back and 262 from the front whites. Driveable for long hitters but there is beach and sea to the left, and the two-tiered green is surrounded by enormous and very deep bunkers. I somehow managed to fluke a birdie but as they say, a win is a win. 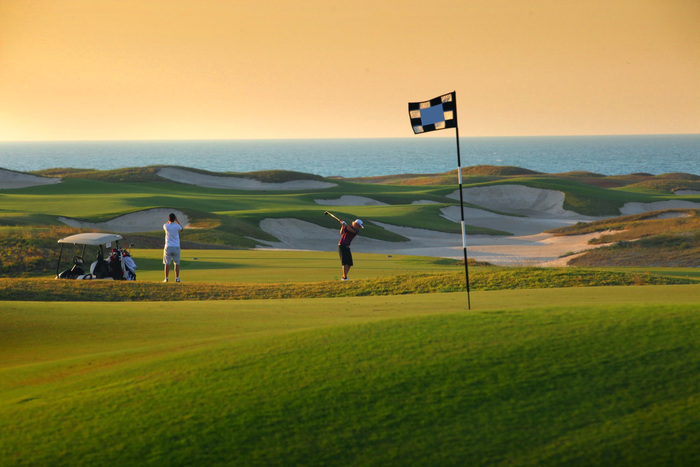 The 14th  – Silhouette – is a medium par 4 but one giant bunker runs all along the right-hand side and then turns to left three-quarters of the way up the fairway to guard the green. Another hole to treat with respect. I don’t and pay the penalty.

The fifteenth is called Double Trouble for a very good reason. This par 5 is 573 yards off the back and 472 off the white but lying in wait is a huge lake that comes into play twice. A good drive missing the water on the left and the big bunker on the right will give you a decision to make. Have you got enough to get over the big stretch of water that’s now looped around and waiting in front of you.

Take it on at your peril. 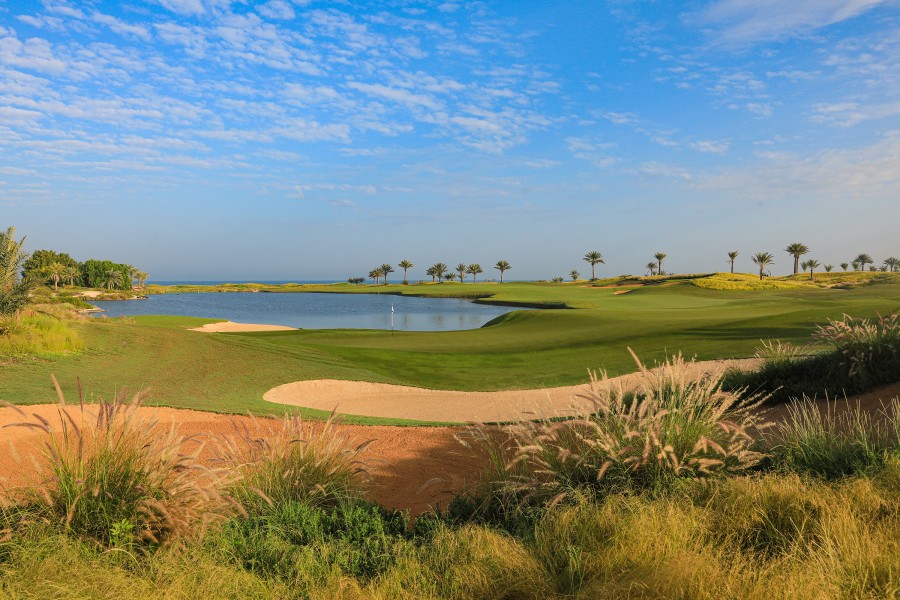 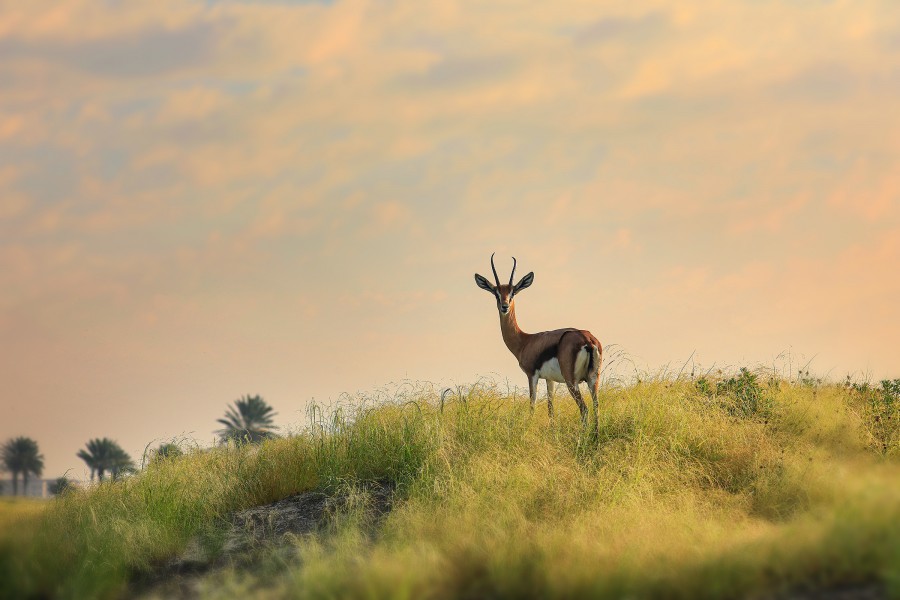 There is no doubt this is an exceptional golfing experience. And it’s not just the course design. Beautiful gazelles are everywhere. They gaze at you after you’ve hit a shot as if to say is that really all you’ve got? I suspect they’ve seen plenty of golf action and any poor hit is met with instant disdain.

The views along the coastal holes are sensational and the service and facilities in the clubhouse are top drawer.

As far as golfing meccas go, Abu Dhabi and Saadiyat Beach, in particular, is right up there.