I descend the vast cream marble staircase imagining how Sissi, Empress Elisabeth of Austria would have made her grand entrance to an admiring audience below.
My fantasies involving a dainty modest lifting of my floor length hooped silk skirt, unfortunately, fall far short of reality. In my winter woollies and sensible walking shoes, I am woefully out of sync with the elegant surroundings. The non-existent audience is drawn from the Greek and Bulgarian officials, lately arrived for an EU meeting in Bucharest who are crowding around the desks arguing about who is first in line. Romania holds the EU Presidency for the coming months and 5 star JW Marriott Hotel seems to be the centre of the universe, heaving with Eurocrats in town for the endless series of meetings that constitute EUROPE, its front parking bay a sea of CD registration plates who will later move off down to the nearby Parliament Palace. 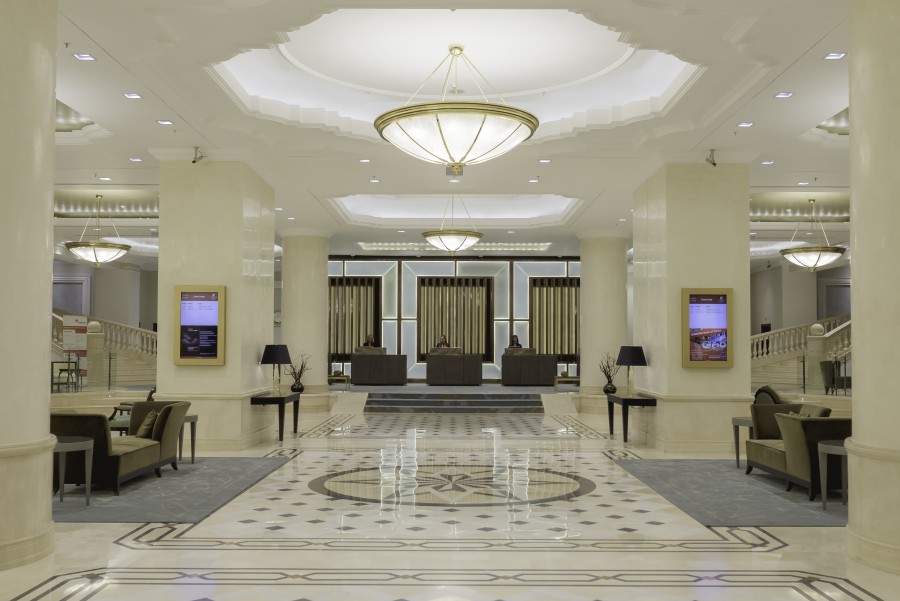 Arrive at the JW Marriott at night and you could be mistaken for thinking that the driver has taken you instead to Parliament Palace, Romania’s most famous building and top tourist attraction. The architectural style of both is similar but the world’s second largest building (after the Pentagon near Washington DC) came first.

According to rumour, fallen dictator Nicolae Ceausescu’s later creation was designed as an administrative spill- over which would also house his VIP guests. With 12 stories and 3,100 rooms, there was surely ample room in the former ‘House of the People’ to receive the dwindling numbers of notables who dropped in on the megalomaniac ruler of Communist Romania during his despised regime’s darkest days.

Ceausescu’s loss was to later be turned to great advantage to the international Marriott chain who can proudly rate Bucharest 5 star Grand hotel among its top global properties. The place, barely finished when sold to Marriott is astonishing in size and genuine old fashioned Hollywood celluloid grandeur. You expect the cameras to roll at any moment as the cast of vintage movies like the Sissi trilogy arrives in the midst of marbled architectural splendour under tons of crystal chandeliers to embark on their Viennese Waltz. 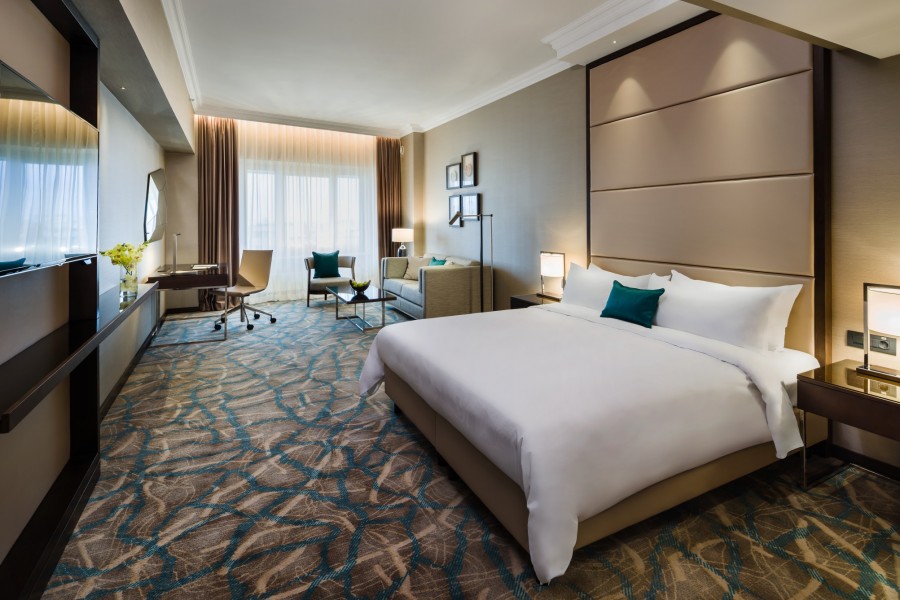 The hotel which opened in 2000, has four hundred and two rooms, over 80 per cent of which are de-luxe (the standard option) size wise the largest of all of the 5-star hotels in Bucharest. My stylish spacious room on the eight floor has a view of the colossal Palace of the Parliament. In front of it and towering even higher into the night sky is a work in progress, the people’s Salvation Cathedral. Built at a cost of €250 million it will be the world’s tallest Orthodox cathedral, scheduled for completion in 2024.

The place of worship has much significance for believers, deprived of places of worship, bulldozed during the Ceausescu era to make way for his grandiose boulevards and miles of concrete apartment blocks. Some people, on the other hand, believe the public funding for the project could have been better used to pay for hospitals and schools. It is, nevertheless, a pretty spectacular sight, especially in a location that already contains a building requiring a mind-boggling 300 full-time cleaners for its upkeep and maintenance.

The JW Marriott Bucharest Grand hotel is also a small exclusive city within a city. Branching off in two directions from the lavish entrance is an upscale shopping gallery, home to brands like Louis Vuitton, Dolce & Gabbana, Rolex, Valentina and several contemporary fashion big names such as Philipp Plein, famous for its crystal skull motifs and leather bomber jackets. Add to that a pharmacy, beauty parlour, hairdresser and bank and there is indeed a village feel – albeit one that requires deep pockets, about the ‘Grand Avenue’. 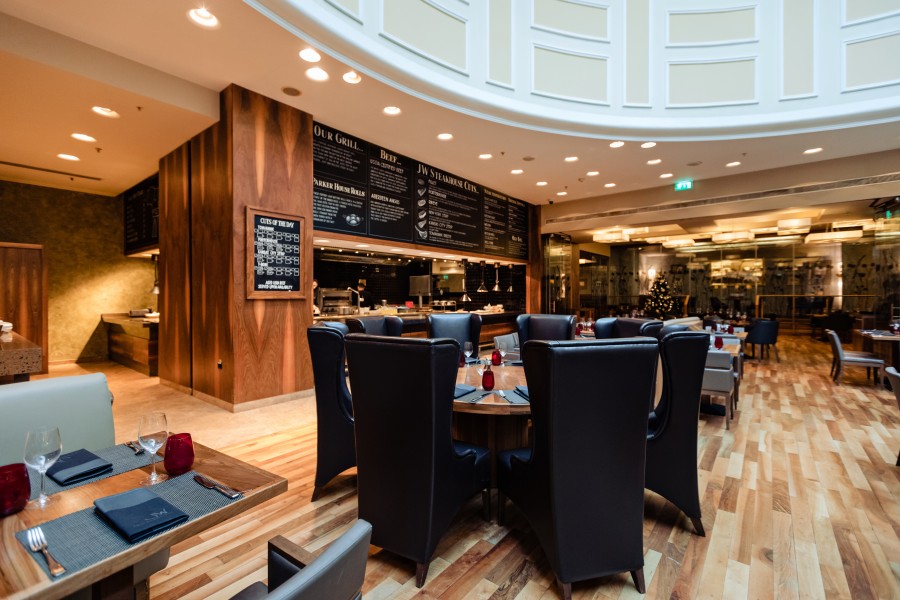 On the first floor guests relax in an immense lounge that has a row of display cabinets on one side containing extraordinary wedding cakes (the hotel’s ballrooms are top wedding venues) There’s also a Vienna coffee shop in the open plan lounge whose counters groan with delectable made in-house pastries, including the famous JW cheesecake and an equally tempting chocolate truffle cake. Charming Mirela Bejan, director of Event management has worked here since the opening in 2,000 when she joined straight from college. She explains “I’ve grown up with the hotel, we’re like one big family here, the staff take such pride in the hotel and in welcoming guests to our special corner of Bucharest”. 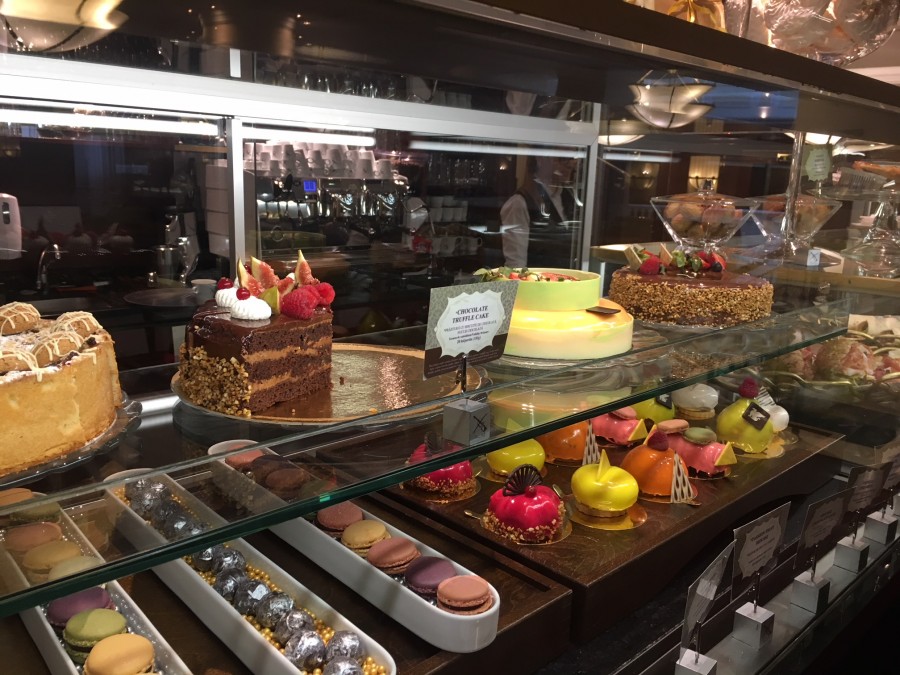 Speaking of which I spend part of the afternoon exploring the tree-lined Cotroceni neighbourhood of gracious 19th and early 20th century villas of Art Deco and modernist architecture before moving downtown by taxi for a look at the Lipscani Oldtown district. Here was the merchant quarter for artisans and artists, today much of that neighbourhood transformed into bawdy bar lined lanes that have made Bucharest a nightlife hotspot in recent times.

Bucharest is a huge city of contrasting districts and architecture, ranging from the stunning environs of the Romanian Athenaeum and buildings that gave Bucharest its allure as the ‘Paris of the East’ in days gone by to the grim unappealing Gara de Nord (main railway station) district and everything in between. 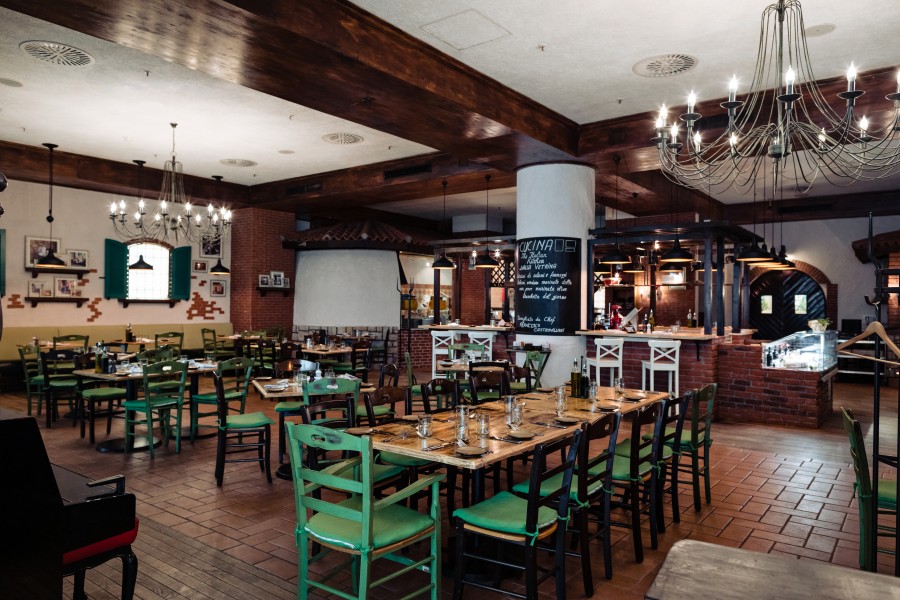 Back at the JW Marriott, when it comes to dining there’s a choice between the JW Steakhouse (renowned for Black Angus beef) the informal American inspired Champions restaurant or Cucina (the Italian Kitchen). The Garden summer terrace restaurant is a popular hangout once it’s warm enough to relax in the open. A roll call of the famous – from politicians to celebs – have stayed at the JW Marriott. Bon Jovi is one of my heroes so of course, it must be Cucina, preferably at the same table he dined at a few years ago while performing in Bucharest.

My table seems just right for a rock icon, discreetly placed on a balcony apart and above other tables and a rustic open kitchen, reminiscent of a Tuscany farmhouse below. Exceptional food is served and though tempted by the Cacciucco classic, a Tuscan seafood soup dish made to a 500 year- old recipe we choose Cacciatora style rabbit with grilled polenta and bell peppers cream and costolette di maiale (pork with roasted pumpkin and apple chutney. Another Italian classic, the Carpaccio is sublime as is the beef bresaola salad for starters. 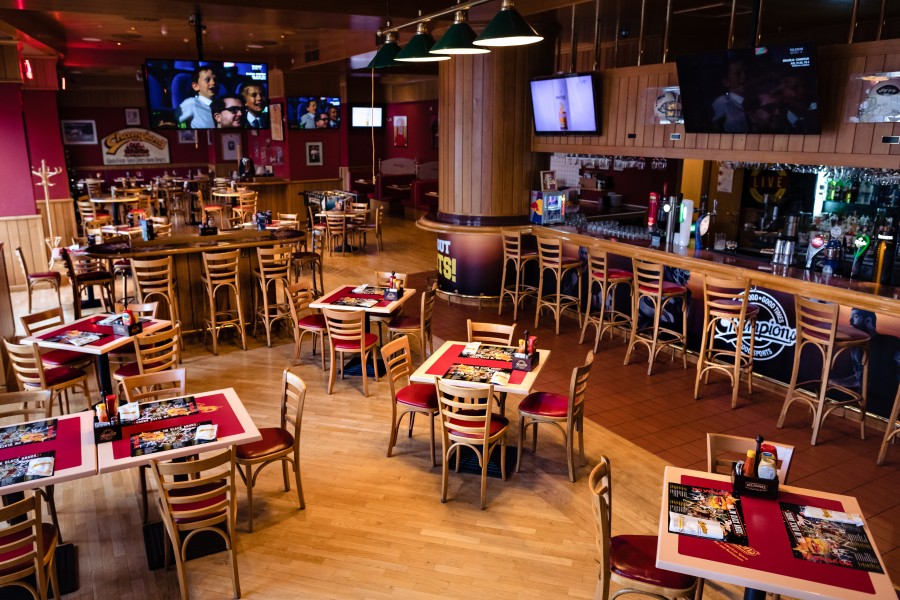 Eat out in Bucharest or any of the bigger towns in Romania and you are in for a treat price wise. Dinner for two with an excellent Romanian wine rarely sets you back more than around £35-£40 for two. JW Marriott is a bit more expensive, to be expected in a five-star hotel. Yet the prices in Cucina are very affordable – around £8 for pasta dishes, pizzas, and antipasti starters with main courses hovering around £15-£20, a steal compared to high-end hotels elsewhere in western Europe or the US.

As a business stay over or a jump off for a touristic tour of Transylvania’s turrets, towers, fortified churches and painted monasteries, JW Marriott Bucharest Grand hotel definitely notches up bragging rights back home.