There I’ve said it. Growing up in a post-Jeeves-and-Wooster egalitarian world, I never thought that I would utter those words. But Jumeirah’s Dar Al Masyaf, DAM to returning regulars, at Dubai’s Madinat Jumeirah, thrives on personal service.

If your Arabic is a little rusty, DAM translates as the Arabian Summer Houses. And the Madinat? It’s where Arabic history meets Dubai’s love affair with dining and retail. Where the ambience of an ancient ochre citadel with timbered wind towers and maze-like souk – but with air-con and Wi-fi – meets Venetian style canals.

When you learn that Al Qasr translates as ‘The Palace’, you sense that the Jumeirah Al Qasr Hotel’s shared reception with the Jumeirah Dar al Masyaf is not a dirham saving economy. It is to provide an appropriately palatial service. 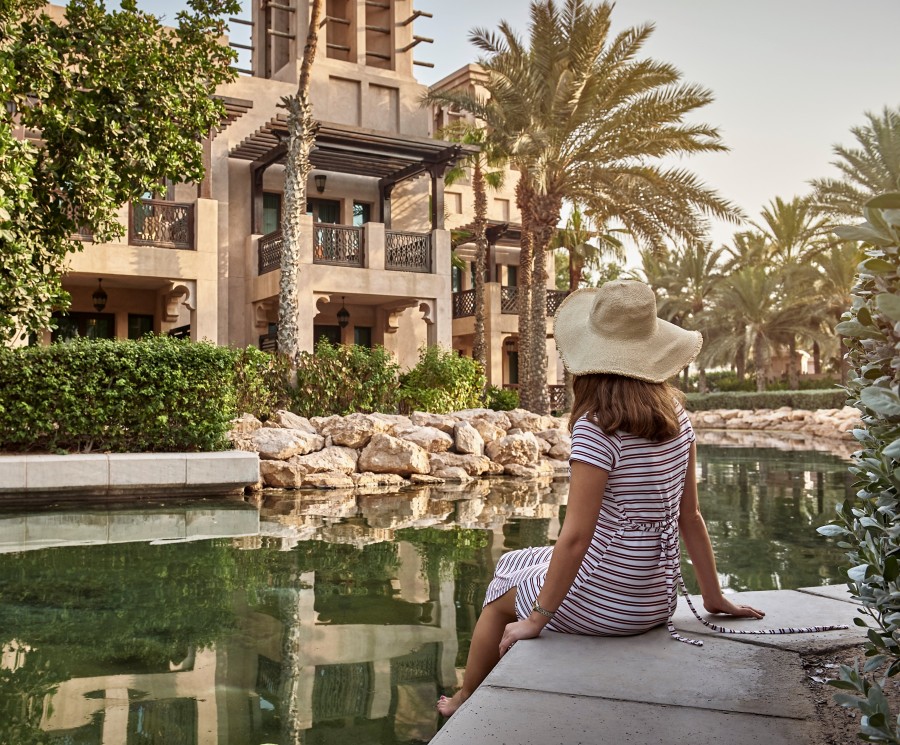 The regal approach avenue ascends through lawns greener than Wimbledon’s, more pristine than Lords, to that grandiose reception. Golden horse sculptures, the Sheiks’ favourite creatures, prance on those lawns. As soon as my taxi’s wheels are still, two turbaned staff, Arabian Nights costumed, greet me.

How did he know my name? Later in a Sherlockian moment of intuition, I deduce that his colleague must have quickly looked at the name tag on my suitcase. It is such detail that epitomises the stratospheric levels of service. 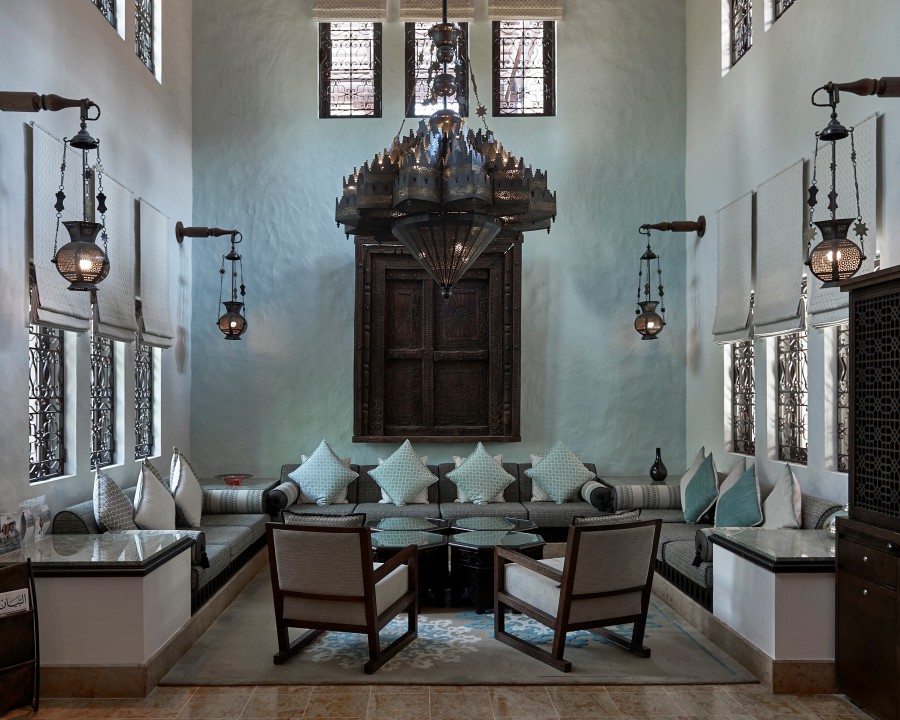 Reception at the Jumeirah Al Qasr / Jumeirah Dar Al Masyaf has been deconstructed. Gone are the queues. Gone are the officious formalities. They have been replaced by a cooling glass of lemon and mint juice on a sumptuous sofa. Then a wooden abra, the Arabic version of a Venetian gondola, serenely takes me through the canals and a swathe of palm trees to my Arabian Summer House.

There, I meet my butler. Well, to be honest, “our” butler. He or she is at the beck and call of the 9 to 11 rooms or suites that make up each summer house. In total there are 29 houses offering 283 rooms or suites. Jumeirah has four hotels on the 42-hectare site. Dar al Masyaf, in my opinion, is so intimate and exclusive that it is more home than hotel. 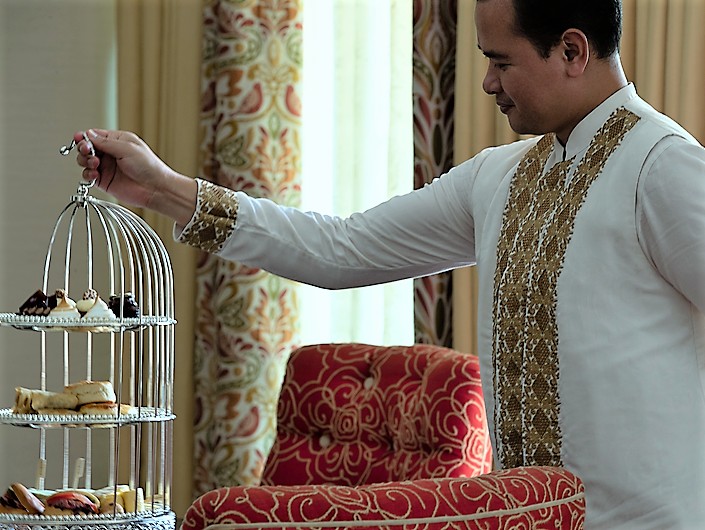 Dismiss any Downtown Abbey notions of Jeeves in black tails and starched white shirt. Jumeirah’s butlers sport sleek Asian-style silky outfits. There’s a hint of pyjamas which is just as well as well as they are on duty 24/7. Don’t worry they are on an eight-hour rota.

“I wouldn’t even know what to do with a butler,” exclaimed a left-leaning friend. Ironically, he would have been the first sat in the Majlis, (loosely translated as lounge), waiting for complimentary cocktails served by his butler between 6 pm to 8 pm. Over these cocktails, you begin to build a sense of shared community, however transient, with your fellow house guests.

Of course, there’s much more to DAM than just the butler. The Arabian Gulf Houses overlook Dubai’s largest stretch of private beach while the Summer Houses have canal views, though they are at most a three-minute walk from the beach. Walking back along the beach, after breakfasting at the Khaymat Al Bahar restaurant with its Gulf views, is a relaxing way to start the day. 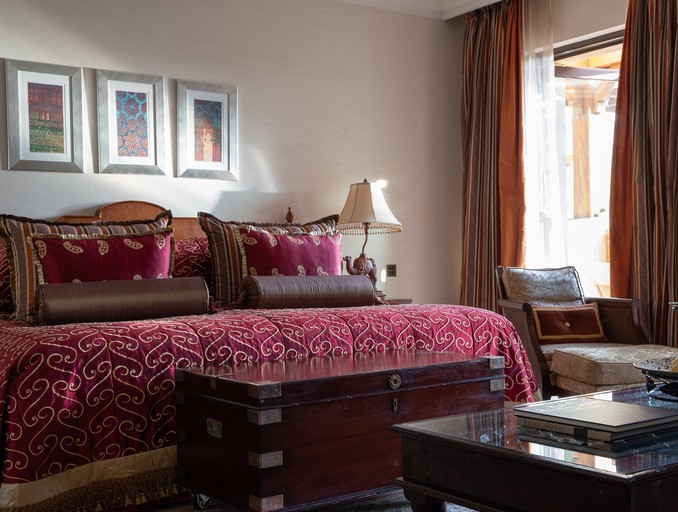 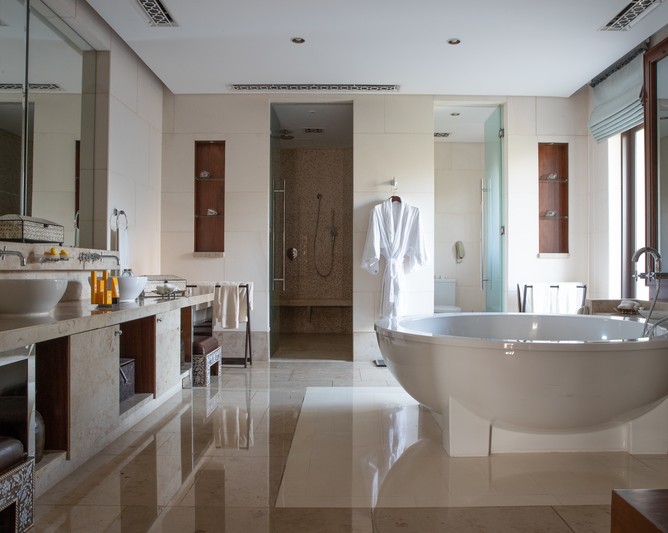 Although there is a grandeur to my room’s decor with Aladdin’s lamps, seemingly more cushions than John Lewis, and tassels galore – it is dressed down with desert distressed timber and brought into the 21st century with a Nespresso coffee-maker and a huge flat-screen TV. A spacious balcony is effectively an external additional room, tranquilly overlooking a canal.

“Bathroom” is an inadequate word for a zone that includes an oval free-standing bath, separate shower and WC cubicles, plus a dressing area with wardrobes and ample shelves. Even Imelda Marcos could have neatly stashed most of her shoes away. Toiletries from Amouage, the Omani sensuous fragrance house, elevate bath-time to an experience that can be both decadent and transcendental.

Although DAM is a rare peaceful oasis in frenetic-hyper-mega-Dubai, you are just an abra ride away from joining the crowds at the Madinat’s busy souk. Alternatively, you can opt to rejoin life in the fast lane by taking a complimentary shuttle bus to the nearest metro station. 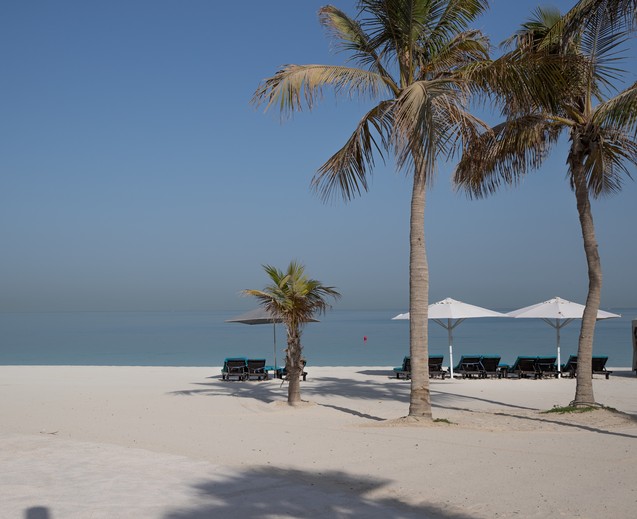 The key advantage to DAM is that it gives you easy access to everything: the beach, the Wild Wadi Waterpark, gym, spa, theatre, over fifty restaurants and numerous shops – if that is what you want. If not, then there is a sophisticated serenity as you relax around the leafy shaded courtyards with their trickling water features or on Dubai’s quietest beach.

Tell Me More About Jumeirah Dar-Al-Masyaf

Rooms from £300 per night including breakfast.