If it was a Jamie Oliver recipe, it might well be called ‘Green Hotel Casserole’. The mixture is simple: take an elegant 18th-century building in central Lisbon; mix in lots of Feng Shui design, stir in some socially responsible touches and add stacks of sustainable stuff – then hey presto, taste the Santa Marta experience.

The hotel prides itself at being one of the Portuguese capital’s most ecologically conscious places to stay and it does it all with subtlety, from its organic local food sourcing to its energy-saving electrical room switches.

It knows its customers: many are couples on romantic breaks, some are time-conscious businesspeople, others are lively families on a deal. Like the rest of us, most would welcome the idea of helping to save the world during their trip, but they want to be cool about it.

And that’s the hotel’s secret: making us feel good about ecology, without beating us over the head with it.

I first noticed it after I walked up to the historic stone facade with wrought iron balconies, and entered the open-plan foyer, a mixture of low-impact and contemporary tile, wood and cork. 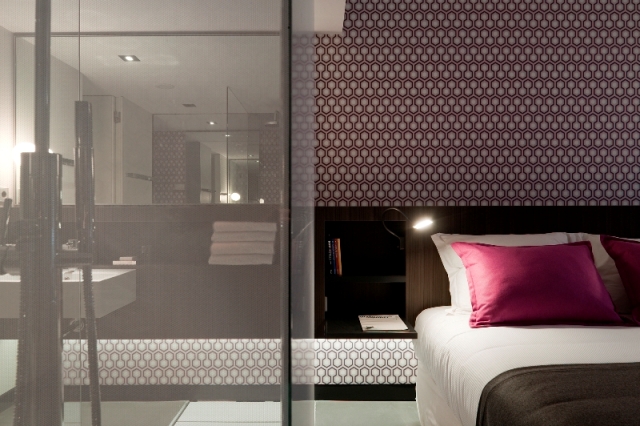 Quiet calm filled the air and continued in my suite, one of seven among the 89 rooms, all of which are designed on Feng Shui principles, water, fire, wood, earth and metal which are aimed at creating the right mood for guests’ stays.

After spending the previous 10 days’ bouncing along, stressfully, in a campervan from Bilbao, it was helpful that my suite’s ‘fire’ decor was aimed at waking me up. My other options could have been a metal room for concentration, earth for tranquillity, water for revitalisation and wood for an inborn need to learn.

‘Sunny’, as it was named, was spacious and delightfully light and airy with a comfortable living room, a king-sized bed, two flat-screen TVs, a freestanding bath, double sinks and a large shower with plenty of biodegradable products.

After a cooling glass of the suite’s complimentary Inspira Water (every bottle supports clean water aid in Africa) an invigorating shower and a cappuccino from the Nespresso machine, I was certainly feeling more than awakened (maybe that was the fire decor doing its job?).

Heading downstairs, I knew I had just 48 hours to rediscover Lisbon after seven years’ absence and was keen to find some truly local experiences. The helpful reception team immediately summoned Joel, the assistant manager, to help with his encyclopaedic knowledge of offbeat nooks and crannies. 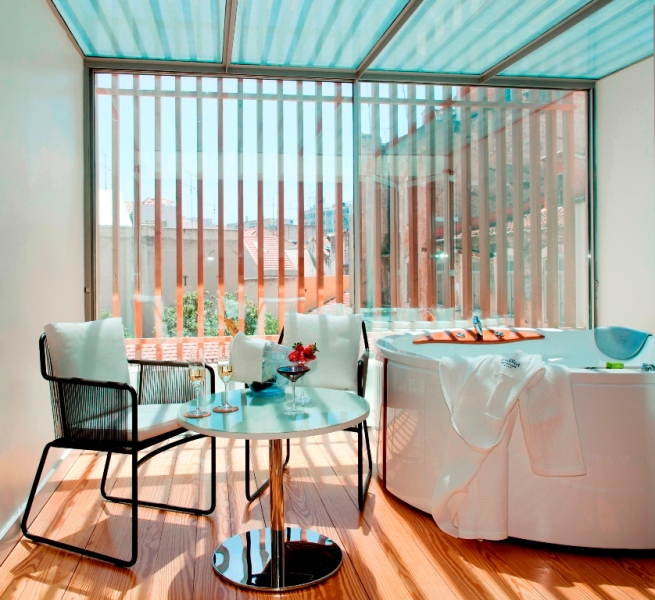 With a knowing smile, he pointed me toward what was ‘in’ since my last visit, including the best fado music bar, his favourite brunch place, classical Gambrinus, a short walk down the road, and the hip spots along the nearby Avenida de Liberdade, as well as the Baixa, the riverfront and Belem.

With the hotel based in the cute Pombaline district, it is easy to walk to many key sights – like the fabulous 19th century Gloria funicular and its great city views – and to get back late when transport can be tricky.

After a busy day of trudging the pavements among the tourist crowds, it certainly lived up to its ‘oasis of peace’ reputation. After my first outing, I returned for a session in the well-equipped Wellness Center, for a sauna, Jacuzzi and welcoming steam bath at the ReTreat Spa which is managed by RitualSpa with its wide range of treatments, plus a well-equipped fitness room.

After changing, a potent mojito was mixed for me in the welcoming Urban Bar, where the resident cocktail expert also offers more courageous guests some daring and, apparently, undiscovered Portuguese liqueurs. 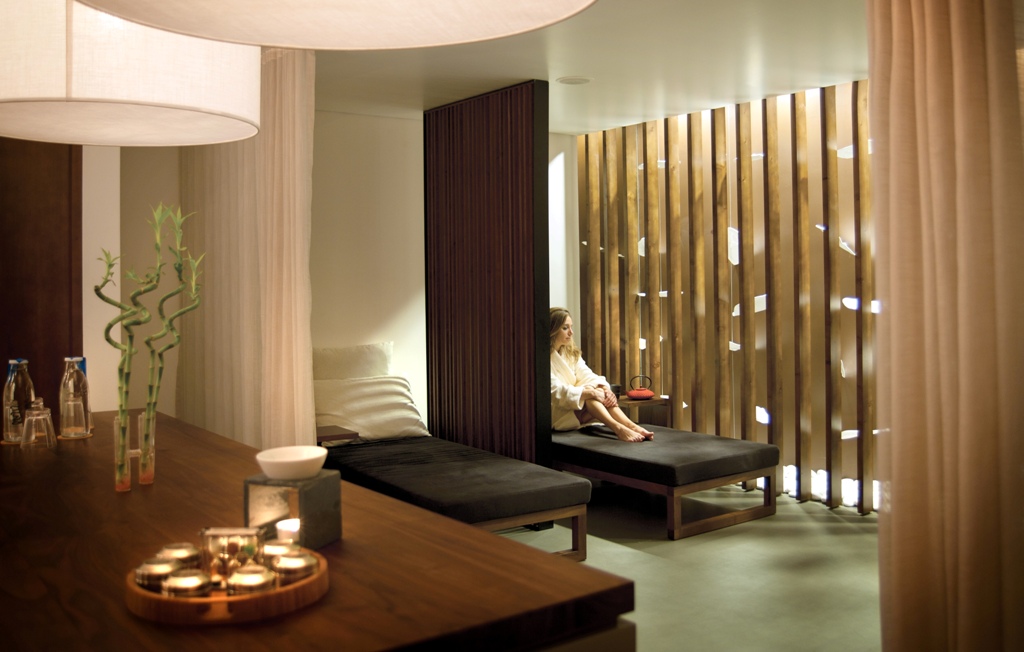 Nearby a group of casually dressed young German-speaking business executives were having an evening green meeting’ which involved some standing around, some sitting, some throwing in ideas, some nibbling organic vol au vents and two even playing a game of pool nearby (a whole new twist to blue sky thinking!).

The Santa Marta certainly aims to please at every turn – nowhere more obviously than in its Open Brasserie Mediterrânica, which ticks countless foodie boxes as the only certified gluten-free restaurant in Lisbon, as well as having vegetarian, vegan, organic and lactose-free options plus dishes for diabetics.

Its open kitchen is guided by Executive Chef Diogo Porfirio, who honed his skills at several top Dubai hotels, and delivers a range of lively creations with Mediterranean favourites and an Asian twist at their core. 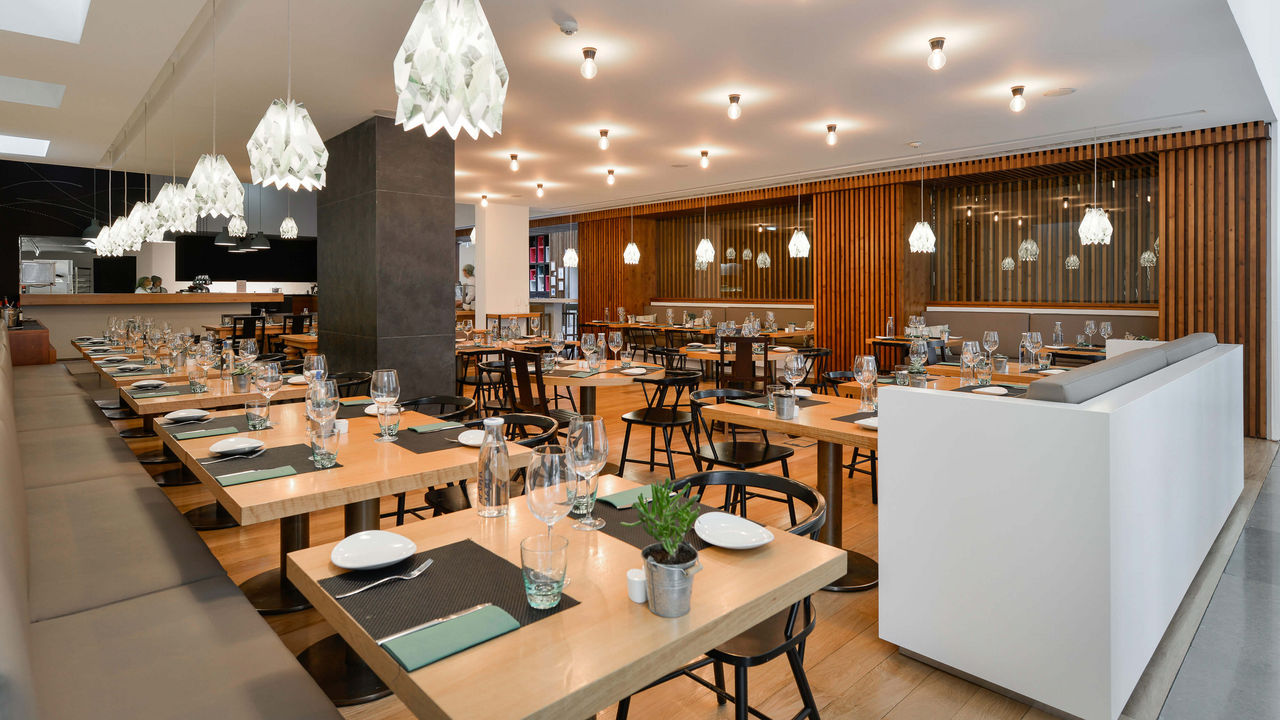 An impressive wine list is available and I chose a glass of very fruity Duoro to accompany my pan-seared scallops starter with a tangy carrot and orange purée, combined with a raspberry gel and pickle daikon.

For mains there was an interesting selection of local game, meats and Lisbon fish, as well as fascinating vegetarian dishes such as a chickpea burger complete with purple onion jam, fried egg, cashew mayonnaise and fried cassava.

I was more than happy with my choice of beautifully cooked Portuguese beef tenderloin, served with potato “mille-feuille”, caramelized shallots, mushrooms duxelle and Azeitão cheese. A Citronella Creme brulee was more than enough to cleanse my palate.

The brasserie’s ambience is based on transparency (hence the Open tag) as well as a Feng Shui-inspired mood of ‘earthiness’, although I found it simply comfortable with great local food and excellent service. It also amounted to a friendly experience with smiling service from my waiter, Fabulo, who was very pleased his mother had given him such an auspicious name!

Next morning, after a very sound sleep, breakfast was another revelation with a huge range of cooked and cold dishes, including such specialities such as a morning ratatouille and those delightful local crunchy custard tarts, Pasteis de Belem. 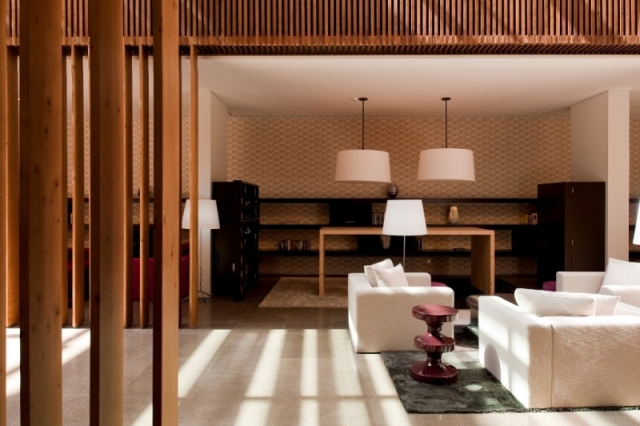 To rest my legs, I asked the reception staff about my best option for a whistle-stop tour of the city’s main sights and they sold me a hop-on hop-off bus ticket, which ticked off everywhere that was worth ticking.

Later came a traditional dinner in the Estrella area and a session of haunting fado music at the recommended shadowy bar before a well-earned taxi back.

Next morning, as I headed for the airport, it felt as if my whizz around one of Europe’s most vibrant and full-on cities had been served up with the perfect antidote –  the calming stress relief of my ‘green oasis,’ the Santa Marta.

Tell me more about the Inspira Santa Marta Hotel

Special Winter bed and breakfast rates start at £84 per room per night, based on two sharing and includes free Wellness Centre access.