Insider Guide to Uzbekistan: Heart of the Silk Road

Merchant caravans, missionaries and pilgrims, soldiers and spies, all journeyed along the golden road through what is now Uzbekistan.

The romance of their numerous accounts is fused into a fairytale wonder in our collective consciousness. No wonder the Silk Road is a bucket list destination for so many people today. 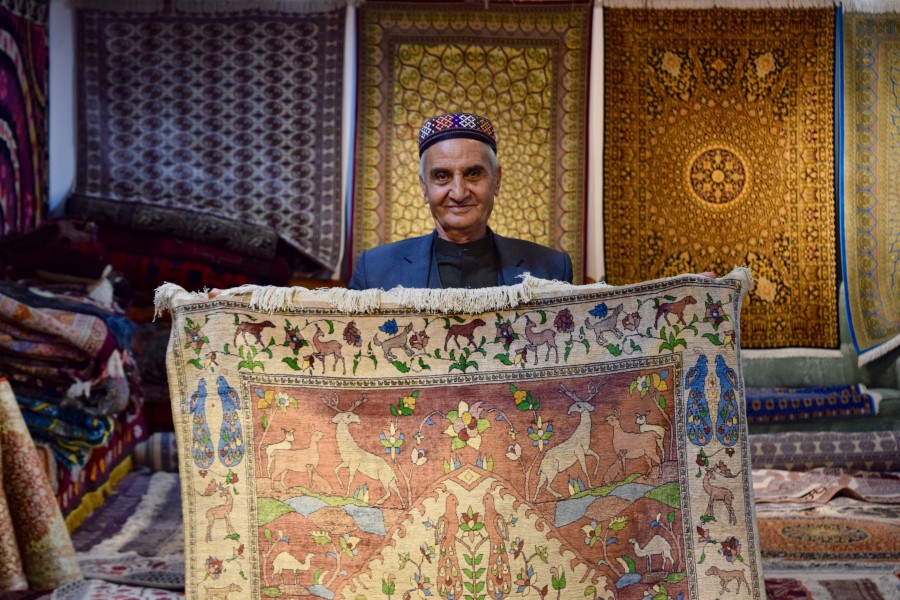 The names of three cities — Samarkand, Bukhara, and Khiva — are sweet on my tongue. These jewels of Uzbekistan are all UNESCO World Heritage Sites, filled with awe-inspiring monuments, but they retain distinct identities, which prevents architecture fatigue.

Take first the desert city of Khiva, an open-air museum inside a fortified mudbrick wall. The sands of the Kyzylkum Desert are all around, and those who arrived here after weeks on the road must have felt huge relief to finally reach the well around which the city grew. Entering through the gates, I still feel a sense of excitement, especially when the streets of the Ichan Qala (the inner city) are packed with traders, tourists, and puppeteers, which creates a carnival atmosphere. 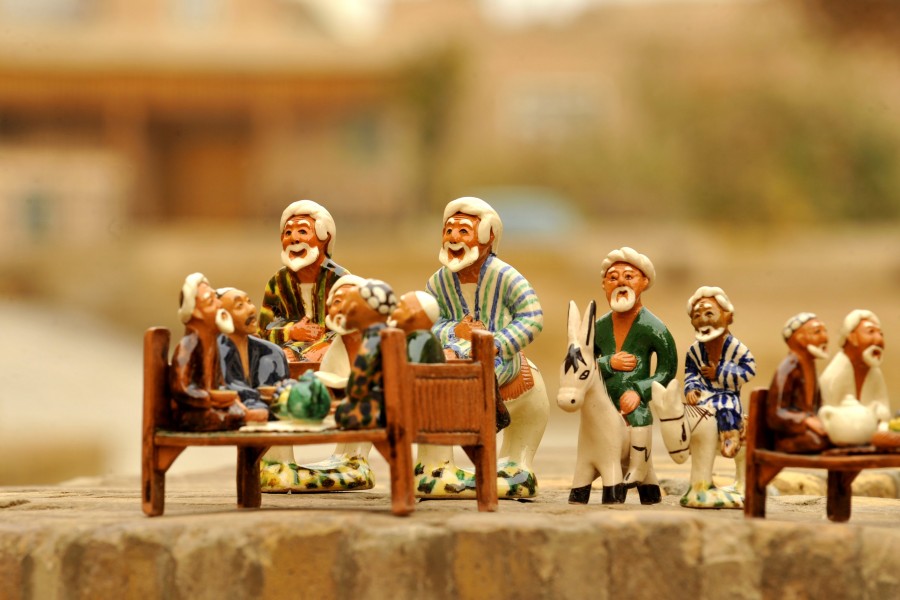 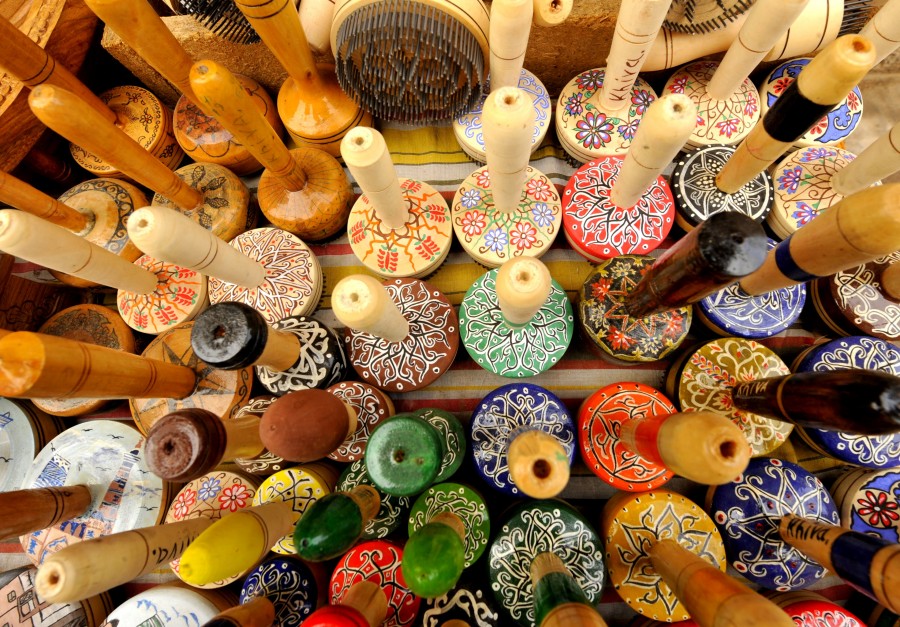 Climbing atop the city wall above the Kukhna Ark is something I recommend. From here not only do you get a refreshing breeze in your hair but also a view across the entirety of the Ichan Qala. The tiled minarets rise up like great Redwood trees above a forest floor, dwarfing the mosques and palaces below. But once the sun sets below the horizon, it’s time to return to the maze of streets and zig-zag your way home to Musa Tura, a former madrassa (university college) which has recently been converted into a charming boutique hotel.

Bukhara is much bigger and bolder, a bustling expanse of a city where the old and new continually collide. This was once the capital of the Bukharan Khanate — the most powerful kingdom in Central Asia — and you can tell its strategic importance and wealth by the size of the Ark Fortress, even if thanks to the Red Army it is a shadow of its former self. 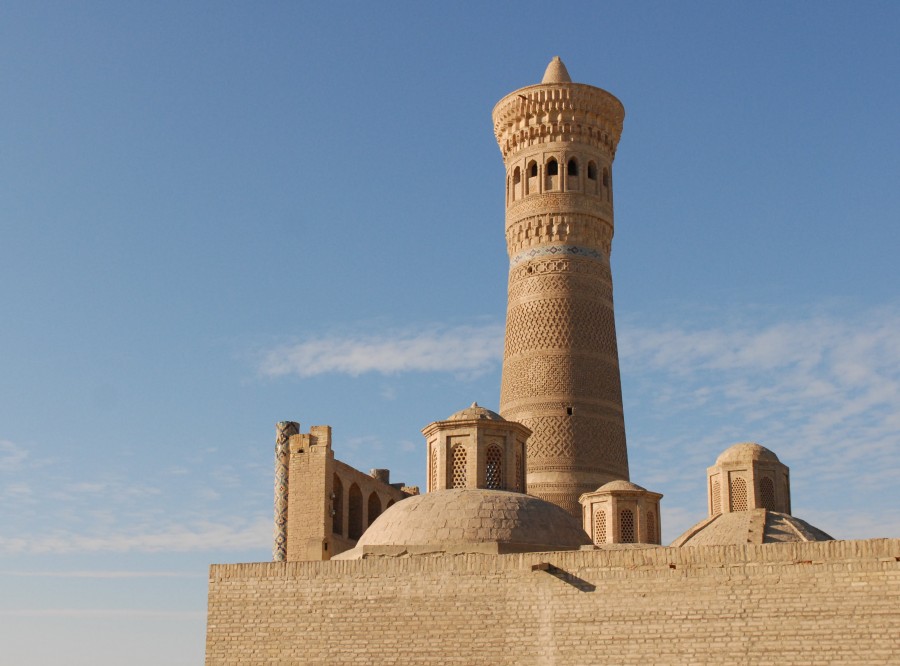 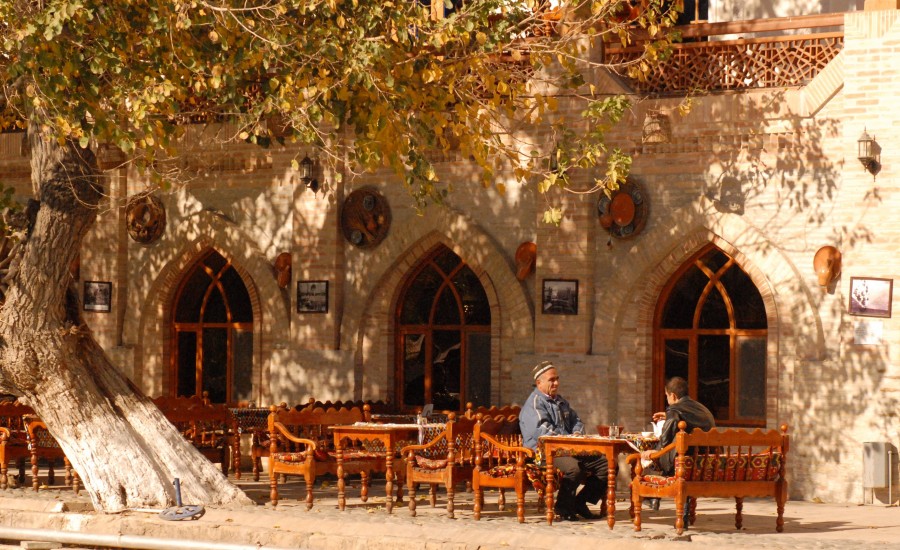 Bukhara is known as Noble Bukhara: it was also a centre of scholarship and faith. Pilgrims still come here from across Uzbekistan and beyond to visit the site where Prophet Job performed a miracle, and the memorial to Imam Bukhari, the Islamic scholar who collected the Hadiths (sayings of the Prophet Muhammad). Muslims and non-Muslims alike are welcome to the shrine of Naqshband, founder of the Naqshbandi order of Sufis, and there’s always peace to be found sitting in the courtyards of the dozens of mosques and madrassas — almost all of which are open to the public — strewn across the Old Town. Bukhara’s not just a sacred place for Muslims, though. Bukhara’s Jewish population has been here for at least 3,000 years. There are some who think that they are one of the Lost Tribes of Israel, and even today they still influence city life, including the mouth-watering flavours of Bukharan cuisine. 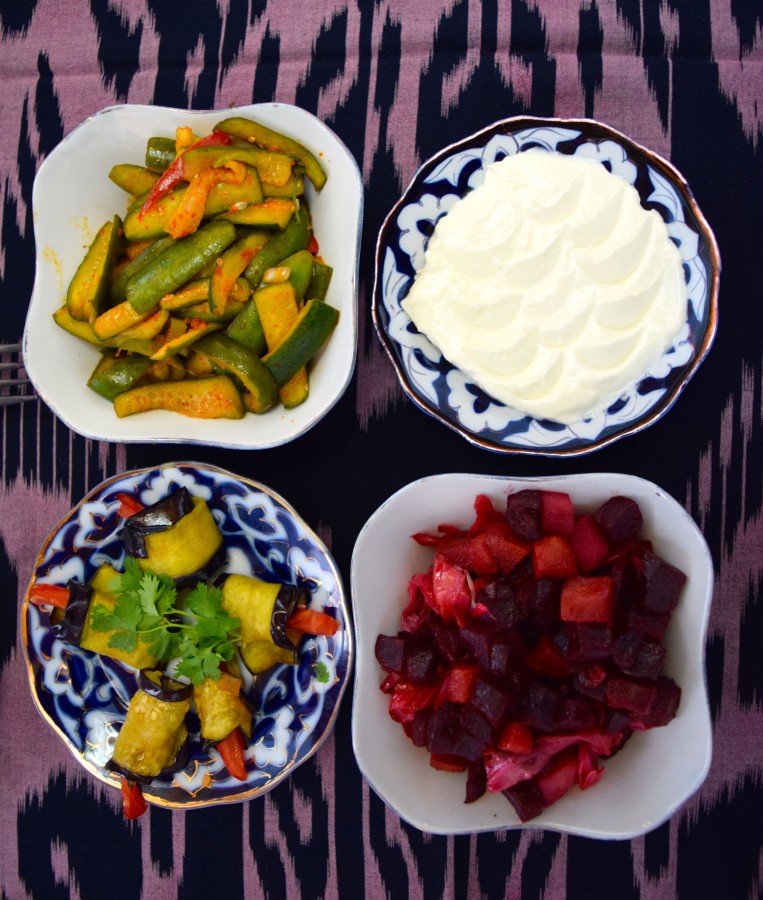 Onwards, though, towards Samarkand. On the way, stop in Navoi Region to explore not only the wild beauty of the Nurata Kyzylkum Biosphere Reserve but also a range of Silk Road monuments with scarcely a tourist in sight. The Sardoba Malik reservoir and Rabati Malik caravanserai remind us how merchants’ caravans made their way across the desert sands, seeking refuge at this oasis; and in Nurata you’ll find both a fortress established by Alexander the Great and the sacred Nurata Chashma, a holy spring and shrine.

The desert here, especially around Lake Aidarkul, feels empty, but if you start to walk you’ll soon appreciate the variety of plant life and hear the birds, many of them migrant species flying between Siberia and the Indian Subcontinent. Sleeping for a night or two in a traditional nomads’ yurt, you will feel the pace of life shift, and be humbled by the sheer number and brightness of the stars in the clear night sky. It’s a chance to refresh your body and soul before returning to urban life.

Samarkand’s UNESCO-listed Registan is to Uzbekistan as the Taj Mahal is to India. The ancient city reached its peak under Emperor Timur (known in the West as Tamerlane), and he brought architects and artisans here from every corner of his empire. The monumental ensembles created at this time are the greatest treasures of the Silk Road. 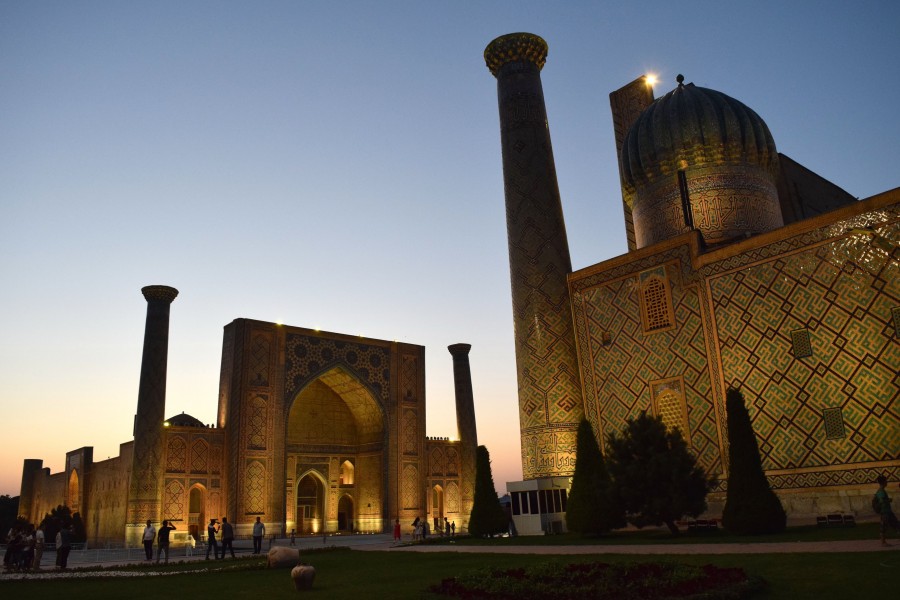 The Registan itself is the city’s main square, flanked on three sides by medieval madrassas bedecked in glorious mosaic and majolica tiles. The Ulug Beg Madrassa, erected by Timur’s son, is covered in stars, reflecting Ulug Beg’s passion for astronomy. The Tilya Kori Madrassa, which is at the back of the square, encloses a mosque glittering with gold.

There’s no doubt that the Registan is Samarkand’s poster child, but it is just one of dozens of monuments with arguably just as much charm and intrigue. Timur’s own mausoleum, the Gur-i-Amir, is lined with jade; when it was built, the Bibi Khanym mosque was the largest in the world;  and the Shah-i Zinda necropolis houses numerous stunningly decorated tombs, all of which are unique. 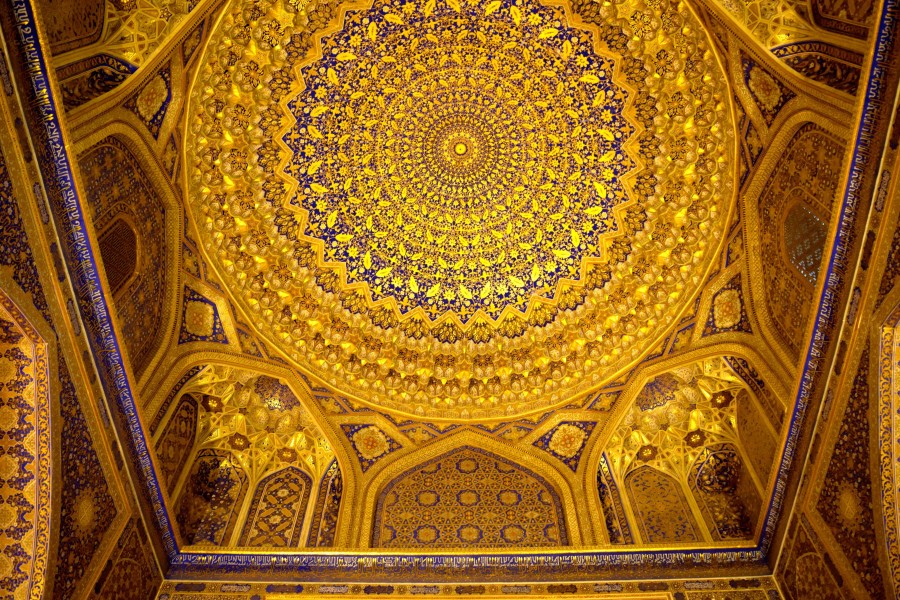 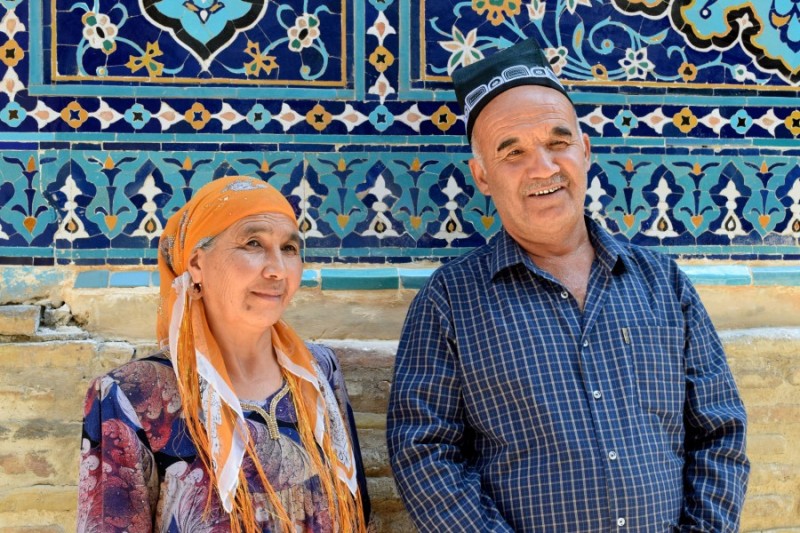 The three Silk Road cities are must-sees for any first time visitor to Uzbekistan, but the country’s attractions are not limited to those with World Heritage Site status. Capital Tashkent is likely to be the start and endpoint of your journey, and though most of what you see post-dates the tragic 1966 earthquake, it’s a green and well-planned city. The Soviet-era Tashkent Metro is a masterpiece of engineering and public art, with every station designed by a different artist. Blue domes make Alisher Navoi station feel like a Timurid mosque; and at Kosmonaut, you can admire portraits of the heroes of the Soviet space programme. Two museums stand out head and shoulders above the rest and will put what you see elsewhere in Uzbekistan into context: the Museum of Applied Arts occupies a building as stunning as its contents, and archaeology and art come alive in the State Fine Arts Museum.

Tell me more about visiting Uzbekistan

Uzbekistan Airways flies direct from Heathrow to Tashkent twice a week, on Tuesdays and Fridays, from £430 return.

British and EU passport holders do not require a visa to visit Uzbekistan.

One thought on “Insider Guide to Uzbekistan: Heart of the Silk Road”