Years before Galvin at Windows, the Hilton Park Lane has been one of the iconic London landmarks ever since its opening in 1963. I remember spending more than a few nights pretending I was actually living the life of a playboy down in Trader Vic’s. Those were the days.

Fast forward quite a few years and my first experience of the top floor Windows restaurant was for the launch of  one of Microsoft’s Windows releases, which at the time I thought was a genius move; Bill Gates towering over London as he changed the world as we knew it.

Another magician doing something similar but using culinary spells instead of computer code is Chris Galvin who together with his equally talented brother Jeff,  ensures Hilton Park Lane’s 28th floor Windows restaurant continues to showcase innovation with their 1 Michelin star Galvin at Windows.

So I am more than a little nostalgic as I take a seat at my window table to cast a culinary eye over Galvin at Windows’ latest 6 course tasting menu and wine flights courtesy of Head Chef Joo Won. 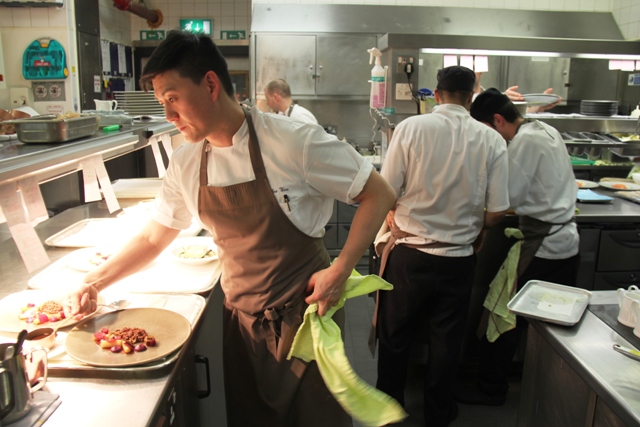 The opening bowl of umami bouillon, mushroom tortellini, tofu and spinach is a flavoursome combination, but over far too quickly. I would have liked a little more in the bowl . Unami is a Japanese glutamate which means “very tasty” which indeed it is during its short time in my company. It was matched perfectly though, with a crisp 2014 Clos du Tue-Boeuf from the Loire. 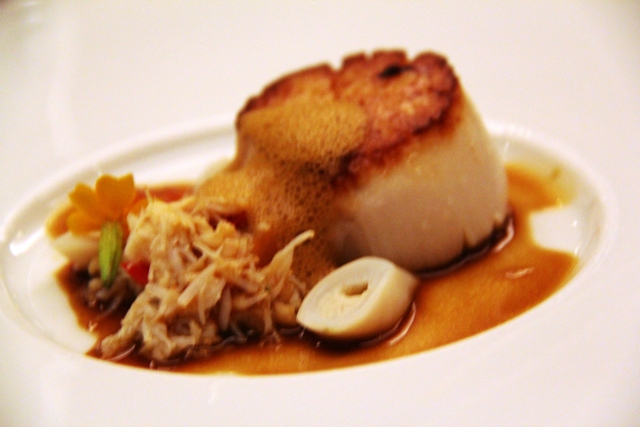 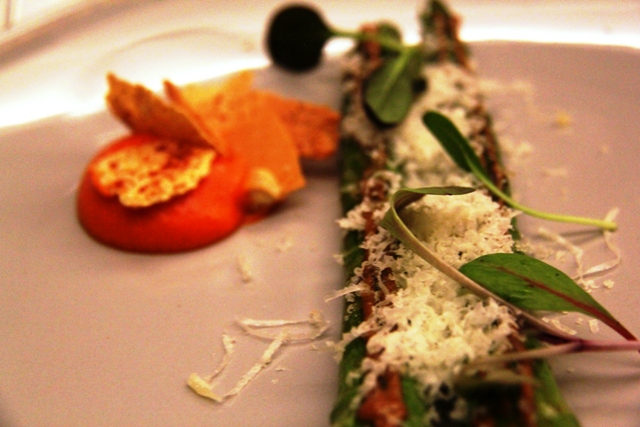 Where the first course lacked quantity, the next is perfect. A beautiful seared scallop with a shellfish salad and Granny Smith apple and bisque vinaigrette married with a belter of a 2013 Clos Marie Languedoc.  My partner who is seafood adverse  devours French asparagus with a gloriously red romesco sauce backed up by a stellar Sancerre.

Two courses down and I am warming to the task. Looking around, the restaurant is three quarters full, not at all bad for a Tuesday night. I pause for breath and chat briefly with Restaurant General Manager Fred Sirleix, surely a legend on Park Lane, who tells me they are repeating a “pay what you think it’s worth” month again this August. “Last year it was a fantastic success” he tells me “we ended up generating more revenue than from our normal menu.”

Could this be the new way forward for eating out I ask myself. 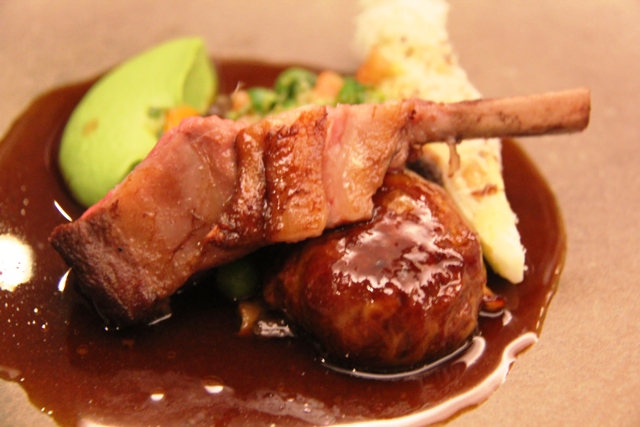 Marinated Iberico pork steak with a spicy soy bean and chilli paste is up next, the little bouquet of pickled radish on the side making a fine bedfellow. Our Brouilly flight got much better once it had a chance to meet up with the food.

No sooner than the pork dish was taken away, it was replaced by a Cornish lamb duo; a juicy rack and a melt in your mouth sloe cooked braised shoulder, with a clutch of petit pois.

This really is a great tasting dish..

After a refreshing Greek yoghurt sorbet palate cleanser we’re diving into a caramelised apple tart with frangipane and vanilla ice cream dessert. Perhaps a little too sweet for me, but this is me being very picky and a little unjust to a really super tart. 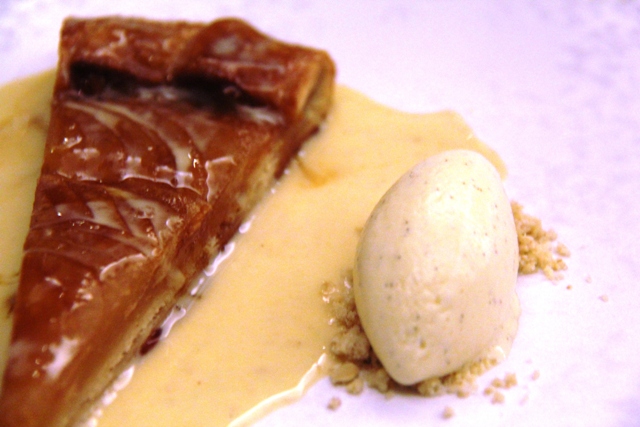 Chef Won makes an appearance, just in time to take the applause for an excellent service. “There are elements of Asian influences I’ve introduced  in the menu, but it is predominantly French haute cuisine.”

Perhaps it is the nostalgia, perhaps the heady heights, but I feel passion in the air up here. Won seems entirely in tune with the Galvin ethos, fresh ingredients presented without over complexity; just a celebration of flavours.

Galvin at Windows fully justifies its 1 Michelin star, an excellent menu with stunning views but without necessarily a stunning check at the end of it.

I think Bill Gates would approve.

Tell me more about Galvin at Windows