Enjoy the high life in Madeira

12/09/2013This entry was posted in Europe and Middle East, Madeira, Portugal and tagged What to do in Madeira on 12th September 2013 by Andy Mossack.

Well this was a first. I was about to be pushed down a very steep hill in the middle of Madeira’s capital Funchal on a sled by two men decked out in white and wearing straw boaters.

To make it even more interesting it was on a bone dry road with a hair pin bend right in front of me. This is tobogganing Madeira style and the Toboggan Men (as they are affectionately called) have being doing this for hundreds of years from father to son. It’s just one of Madeira’s quite unique attractions and it’s great fun. 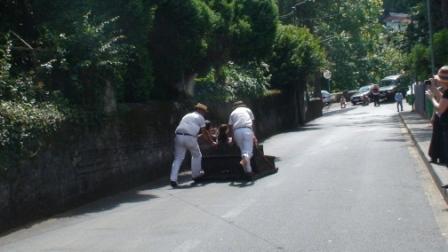 This stunning sub tropical island under Portuguese ownership since 1400,  has strong British influence from the time of the Napoleonic wars, and that’s still very evident in the many beautiful colonial properties around it, many now converted to luxury Quinta hotels. Madeira is tucked away in the Atlantic and often overshadowed by the popular Canaries lying just to the south,  but the truth is Madeira’s year round sun makes it a great choice for a winter break. Local life is rich in tradition and festivities, there’s a Kodak moment everywhere you look, the food and wines are delicious and it’s a walkers paradise. 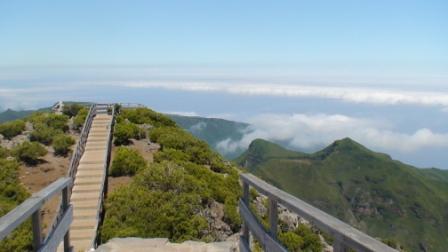 The island’s spectacularly rugged  scenery formed out of Its volcanic birth, is a myriad  of wondrous geologic formations and colours that make walking the island such a pleasure. I tried Vereda do Areeiro, a walk linking Madeira’s two highest peaks. This magnificent mostly paved walk with some jaw dropping descents and ridges tested my fitness, but provided me with some simply stunning views across Madeira’s mountain spine and by the time I’d reached the summit, I really felt that I’d walked across the top of the world and earned that cold beer. And then there are the famous Levadas; an ancient network of stone irrigation channels built to transport water across the island. Running all over lush valleys, mountains and tunnels,  they provide walkers with a perfect route map across the island, so you can stroll alongside or even on top of them and just enjoy the views. 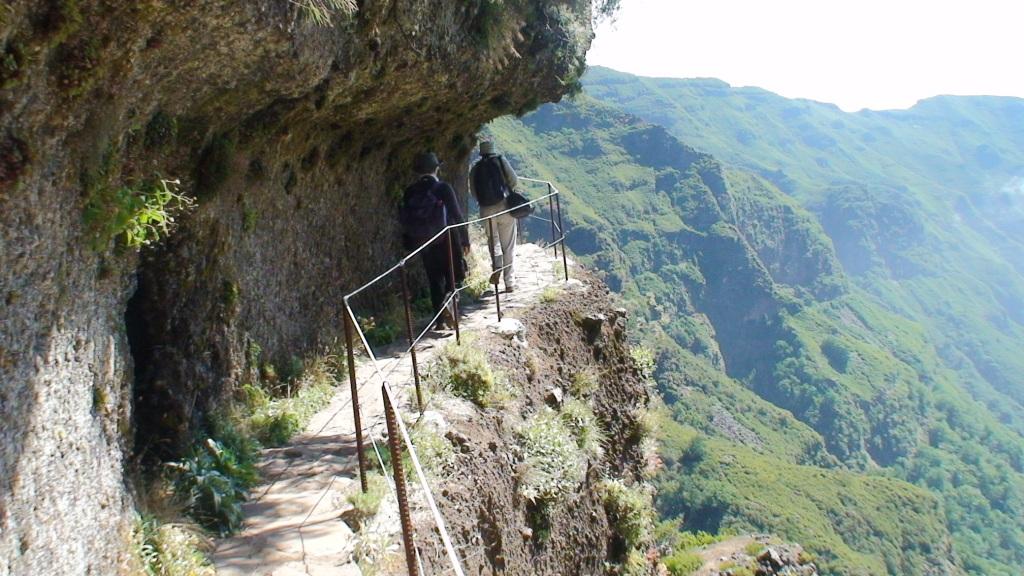 But there’s much more to Madeira. It offers a dazzling canvas of sub tropical flora and fauna. Check out Funchal’s excellent botanical gardens such as Jardim Panoramico, or Santa Luzia. There’s some outstanding nature reserves like Rocha do Navio in Santana for a glimpse of Monk seals, or walk through 700 metres of lava tubes at the Volcanism Centre  at São Vicente, or just enjoy countless outdoor sporting activities.

The capital Funchal is an impressive sight.  It’s a huge amphitheatre that begins in the harbour and rises up to over 1,400 feet, so to get around there are cable cars or you could try a toboggan of course!.It’s a magical sight particularly at night and even more particularly over Christmas and New Year’s Eve (see the breakout box). It’s got plenty of shopping and a long promenade where you can gawp at the huge cruise liners as they pass by. The lovely old town near the harbour has mess of restaurants and bars amongst its narrow cobbled streets where you’ll find traditional food like Bolo do Caco sweet potato bread cakes with garlic butter inside, or Espetada barbecued beef or pork skewers, and of course Madeiran wines and cakes are famous the world over.

Festive traditions are deeply rooted into Madeiran custom and from mid November Funchal’s huge bay is transformed into a giant nativity scene with literally thousands of illuminations across the capital culminating in the biggest firework display in the world on New Year’s Eve. It’s an awesome spectacle, but very popular, so make sure you book early!

4 thoughts on “Enjoy the high life in Madeira”