I was informed by those in the know, that Element 47 was named after the silver ore that was once Aspen’s meal ticket, rather than my spectacularly wrong guess, the number of ingredients chef Matthew Padilla uses in his gastronomic creations.

That said, I felt it was a justifiable guess given the culinary treats I was experiencing in one of Aspen’s most treasured restaurants, hidden inside the celebrated Little Nell hotel. It’s a restaurant which celebrates Colorado cuisine using locally sourced ingredients, a fast growing trend in the USA where farm fresh produce is fast becoming almost a mandatory requirement and long overdue in my opinion.

Element 47 may not have a large menu, (unlike its wine cellar which has 22,000 bottles) but it is sprinkled with all kinds of goodies from individual to sharing portions that have “eat me now” temptations written all over them. I was for example, torn between a starter of local watercress and golden potato soup with arctic char roe, crème fraiche and potato chips ($16) and an early harvest vegetable salad with avocado puree, cucumber vinaigrette and benne wafer crumble. ($18) “no contest” said my patient server “harvest salad every time for me.”  And so it came to pass, well who am I to disregard local knowledge? There was a moment though when I contemplated dropping everything for the house-cured pork belly and sea scallop with sweet corn succotash and peach glaze instead ($22). In the end common sense prevailed and the harvest salad more than lived up to the billing. 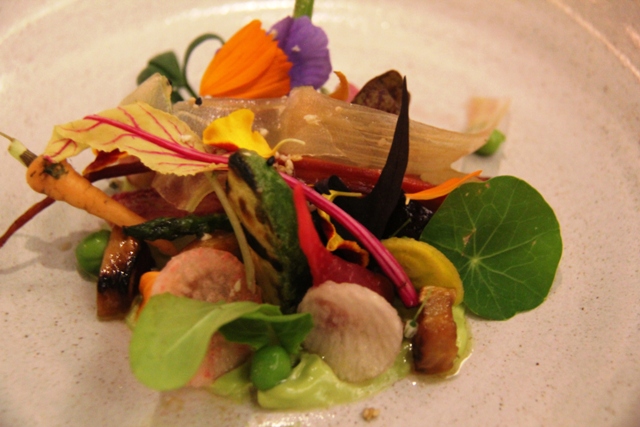 Having had a peek at the support act, it was time for the main event with chef Padilla sprinkling his magic dust wherever you looked on the menu. From pan-seared Scottish salmon with a pea risotto , snap peas, carrots and mushrooms ($42) to Colorado lamb loin with caramelized cauliflower puree, braised scallion and coffee crumble. ($49). Under the watchful eye of my still patient server, I chose the 14 oz prime New York steak with king trumpet mushrooms, potatoes mousseline, spinach and house steak sauce ($59). “An excellent choice” she tells me, and pleased with myself for choosing so well, I celebrated with a side dish of smoky gorgonzola macaroni. 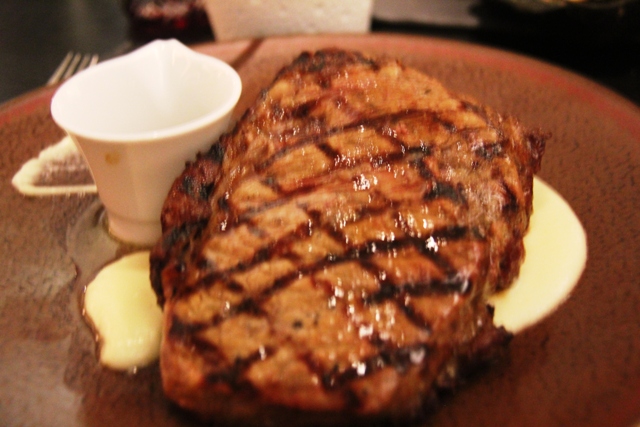 The steak was a total triumph, not to mention a dish of sizeable proportions; far too much to include a macaroni side that’s for sure, but I did choose excellently, so I was worth it.

Colorado peaches have attained legendary status in these parts, so when offered a dessert of said peaches with cream, brown butter cake, grilled peaches and peach champagne sorbet ($12) it is quite frankly a no brainer. This was, I have to say, a marriage made in heaven. 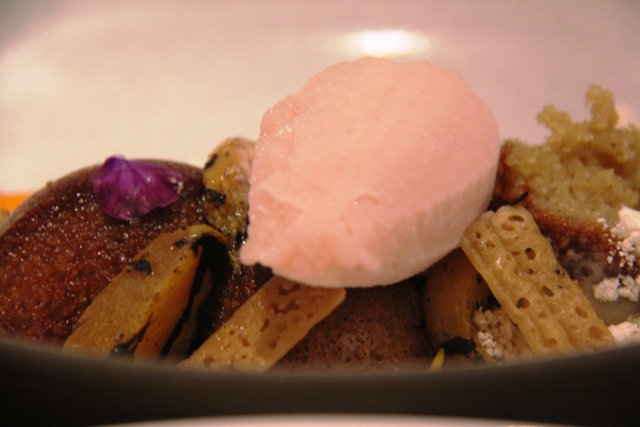 Element 47 is Little Nell’s signature restaurant and with so many bottles gracing its cellar, it’s no wonder a wine pairing is offered with the meal. Sommelier supremo Nick Barb’s almost encyclopedic knowledge of the fruit of the vine should be enough to convince you but the pairing price of £65 is an added incentive should you need one.

Aspen in summer is a revelation; her clear blue skies and laid back lifestyle a joy to experience. Her roots may well have been in silver mining, but you won’t have to dig very deep to reach this Element 47. It’s practically on the doorstep.

Where can I find Element 47 Restaurant?