On the Trail of Civil Rights in Alabama

Although Alabama wasn’t the only segregated southern state, the major battles to give equal rights to Black people were fought on its soil. Now museums, monuments and interpretative centres tell the story of civil rights in Alabama, but it’s best to hear it from the locals.

It’s only when you come to Alabama that the story of the civil rights struggle comes vividly to life. Of course there are museums, monuments and interpretative centres, all designed to teach you the history, but segregation and discrimination is still in living memory. The volunteers who guide me round their churches or museums are usually retirees, with personal experience of the struggle, and they’re only too pleased to let you have their personal version of history.

The big push for civil rights started in the 1940’s when returning black soldiers from WW2, who’d fought alongside their white counterparts, came back to the same old segregation. They’d seen how things were different in Europe and began to agitate for equal opportunities. They called it the double V campaign – “Victory over Hitler” and “Victory over Racism”. Unfortunately the South wasn’t about to give equal rights to blacks and the Ku Klux Klan used every possible means, including violent bombings and murder, to preserve the status quo.

The “Mother of the Civil Rights Movement” was Rosa Parks who, in December 1955, was arrested for refusing to give up her bus seat to a white passenger. Her conviction, four days later, started the Montgomery Bus Boycott. It lasted 381 days until the Supreme Court ruled that segregation of the bus service was unconstitutional. In the Rosa Parks Museum they have a minute by minute multi-media reconstruction, using a full sized replica of the bus and video projection. Photos and original historical documents detail the background, but the whole thing seems slightly artificial, with a touch of the theme park about it. 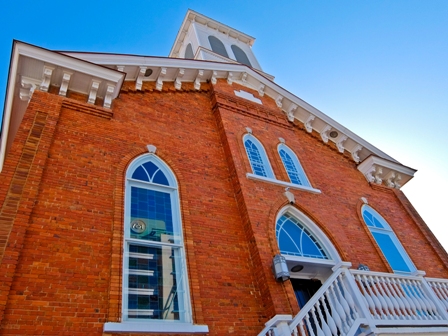 Far more interesting is a tour of the Dexter Avenue Baptist Church, which was built on the site of a slave trader’s pen in 1889, one block from State Capitol. The church was one of the organising points for the bus boycott and Martin Luther King got his first job as preacher here in 1954.  Wanda, my guide, heard him speak many times, until he left in 1960, and allows me to take a seat at his old desk in the office.  The church organist from those times, still plays every Sunday to the 150 regulars and it’s well worth attending a service there. 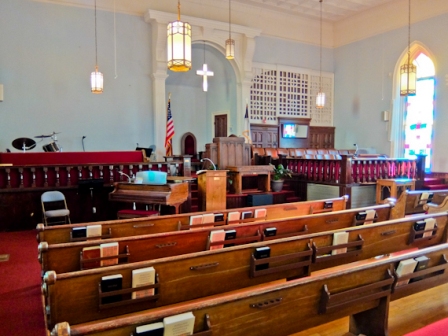 Another important landmark in the civil rights movement is Selma, 50 miles west, and the location for the recent movie of the same name. I drive what is now a major highway, although back in 1965 it was only a simple two lane blacktop. This was the route for the famous March to Montgomery and today it’s been designated as a National Historic Trail. 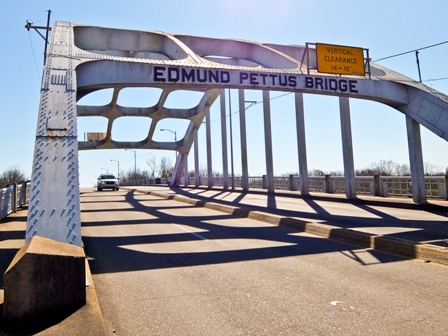 I stop before the iconic Edmund Pettus Bridge, just outside town, walk the rest of the way. I’m thinking of the events of March 1965 when armed police attacked 600 civil rights activists using whips, nightsticks and tear gas. They were setting out for the state capital to protest voting rights and the violent events, captured on television, sent shock waves through the nation. A few days later, after more violence, they were finally allowed to cross, protected by the army and the National Guard. The events led President Lyndon Johnson to pass new legislation guaranteeing the right of African Americans to register and vote without harassment. 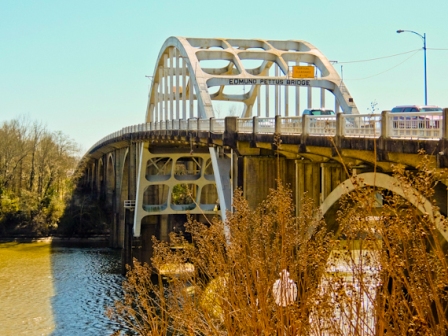 Today the Voting Rights Museum, just by the bridge, tells the story and I take a self-guided 30 minute historic walking tour which includes the Brown Chapel African Methodist Episcopal Church where the march started.  The town probably looks the same as it did in 1965 but, the trouble is, that there seems to have been no maintenance since then. Many buildings are boarded up, beautiful antebellum mansions are crumbling and nobody seems to have an answer to its problems. For Southern atmosphere visit the extensive graveyard, Spanish moss drooping over Confederate Graves, some still adorned with flags. 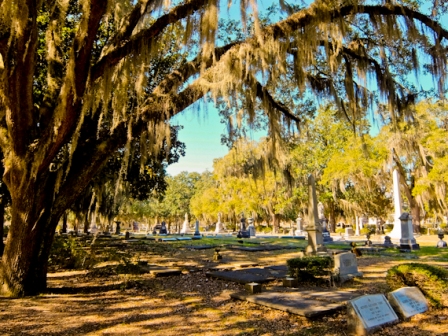 Birmingham is a surprisingly attractive city, ringed by tree-lined hills, but came into being as a major industrial centre, factory chimneys belching smoke. It was also completely segregated, with large areas zoned for white housing, and smaller areas for black. I get a sense of this when I visit the abandoned Sloss Blast Furnaces, a fine piece of industrial architecture, now preserved for posterity. My guide tells me that although the workforce was mainly black, the management was always white, and there was no scope for promotion.  He points out the primitive black bath houses, where the workers washed, then shows me the luxurious washing facilities for the whites. 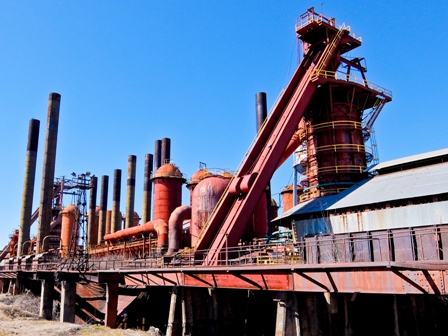 The civil rights movement began to grow in the early 50’s and it led to a rash of bombings, mainly against black churches, instigated by the Ku Klux Klan. So frequent were these that the city was nicknamed “Bombingham”. Perhaps the most tragic incident was the explosion at the 16th Street Baptist Church, a major focus for the black struggle. 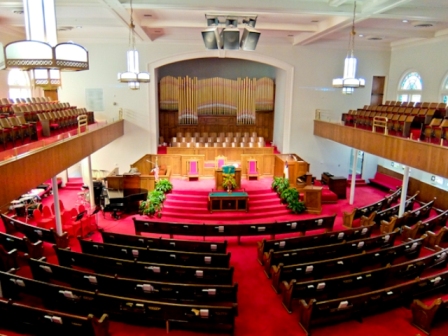 On the morning of September 15, 1963, around 200 church members were in the building when a bomb went off. Most inside managed to escape but the bodies of four young girls, who’d been attending Sunday school, were found in the basement. There was public outrage and less than a year later, Congress passed the 1964 Civil Rights Act. This ended segregation in public places and banned employment discrimination on the basis of race, religion, sex or origin. 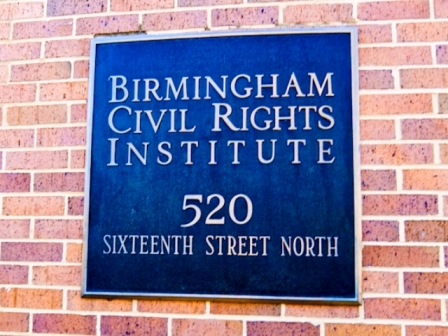 The church makes a good starting point for visiting the area, now designated as the Civil Rights Cultural District, and all the major sites are accessible on foot. Just across the street is Kelly Ingram Park, dominated by a huge statue of Martin Luther King. Behind him, as you walk past the Four Spirits sculpture depicting the four girls moments before the explosion, it’s hard not to be moved. The Freedom Walk takes you round the circumference and through installations by artist James Drake. You run the gauntlet past three life size lunging police dogs before being confronted by a massive sculpture of a cop urging his dog to attack a child. 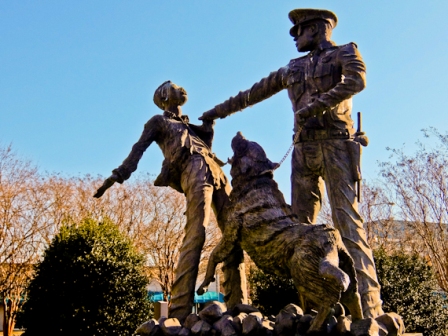 On the corner of the park is the Birmingham Civil Rights Institute which tells the story of Birmingham’s struggle using multi-media. I like the Confrontation Gallery, where life-sized images deliver recordings of people’s memories of the time.  Unfortunately, the end of segregation coincided with a huge downturn in Birmingham’s fortunes. Heavy industry couldn’t compete, the factories closed and the city went into deep depression. Downtown became a dangerous place to be at night, the home of drug dealers and petty criminals.  Slowly it recovered and people are now moving back into the city centre, something a local history teacher says he couldn’t believe would happen in his lifetime. It still isn’t perfect, as you’d expect but, as Martin Luther King predicted, change did eventually come to Alabama.

Tell me more about the trail of Civil Rights in Alabama

British Airways, with American Airlines, flies to Birmingham via Dallas or Miami.

The historic Hassinger Daniels Mansion Bed and Breakfast makes a good base.

The Bright Star Restaurant opened in 1907 and is now an institution.

The Renaissance Montgomery Hotel and Spa is right in downtown