It’s the hardest restaurant to find your way into, in spite of its familiarity as a London landmark.    Who’d have thought you could eat dinner inside George Gilbert Scott’s clock tower atop St. Pancras station?     It actually houses a private penthouse whose Gothic tower enjoys a sometime alter ego as UNA, a South American supper club becoming one of the hottest tickets in town.

UNA, the brainchild of Buenos Aires chef Martin Milesi, stands for one, as in “One Table, One Restaurant, Twelve Guests,” to quote their sales spiel.   Twelve guests who gather around a big square table laid out inside the tower a few evenings a month to enjoy fanciful conceptual cuisine inspired by the best-loved ingredients of Peru, Chile, Mexico and Milesi’s native Argentina.   This creative chef knows whereof he speaks, as he worked in Brazil and Uruguay between Buenos Aires and Europe, and has lectured on the history of Latin American food at the Argentine Institute of Gastronomy. 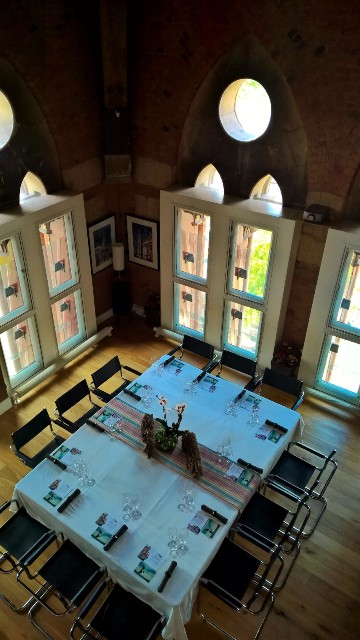 The menu is, invariably, a heady mixture – Argentine beef served with chimichurri and blue potatoes and warm Waldorf salad may well be preceded by Peruvian ceviche, a dish of quinoa with confit tomatoes, then a square of Brazilian-style slow-cooked pork belly with black beans and mint guacamole before the beef arrives.  Cheese and dessert follow, but all in tiny portions – this is an elegant little seven-course feast for £95, including matching wines.
At a meal marking the supper club’s first anniversary – UNA first hit London in May 2014- I met a mix of diners as heady as the pan-American food itself.   To my left sat a head chef from St. John, to my right an executive who had backpacked all over South America during her gap year and now had the wherewithal to pleasure her sophisticated palate regularly at London’s hottest dining spots. 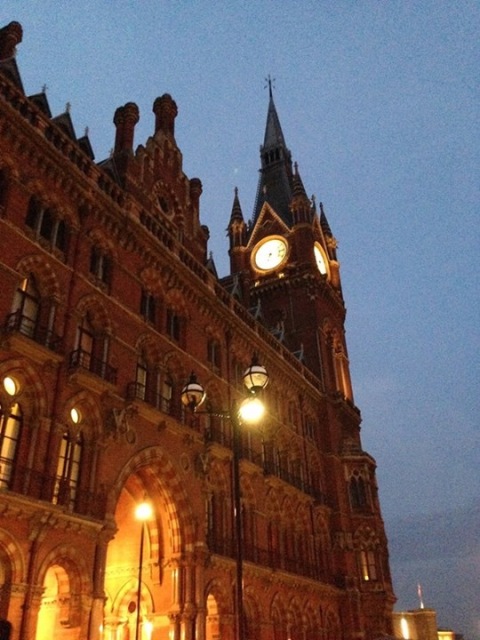 Both had learned about the pop-up from flyers spotted locally, while others had picked up word of mouth from previous diners.  A convivial house party feeling was established by pre-dinner greetings over a welcome cocktail from the lucky owner of the apartment, who did a show-round and gave some history about the remarkable Victorian building and its recent transformation.
One of UNA’s few downsides, apart from the tiny portions, is that the entrance can be impossible to find unless you follow the instructions given when  your booking is accepted to the letter.  There are many dead-end routes into the building, and you won’t get anywhere trying to gain access via the station or the hotel.
Another is that the dinners inevitably get sold out, so booking early is vital, and a third that inevitably, like the legendary Windows on the World which  topped the late World Trade Center in New York, the incredible views and rarefied sensation of dining in the sky are always at risk of upstaging the food.

Where can I find out more about UNA supper club