The Inn and Spa at Loretto

Given that the two most important attributes for a Santa Fe hotel are location and local ambience, The Inn And Spa At Loretto has it over pretty well all its rivals.   It’s just a block from the Plaza which is the centre of town life and on the prettiest, southernmost side.   And despite its good looks, it’s very fairly-priced in a city where many lesser properties charge more and deliver less.

Visitors come to Santa Fe to admire the round-cornered buildings whose desert-toned walls and dark wood posts mimic the original 18th century adobe architecture, and this inn, next door to the famous Loretto Chapel, is an imposing building rising in tiers in the style of nearby Taos Pueblo, a prime area attraction.

The lobby is a huge, slightly forbidding tiled-floor space, but the room corridors are more intimate, pleasingly furnished with colonial-style furniture and bright rugs showing the convergence of Spanish and Native American influences which characterises New Mexico. 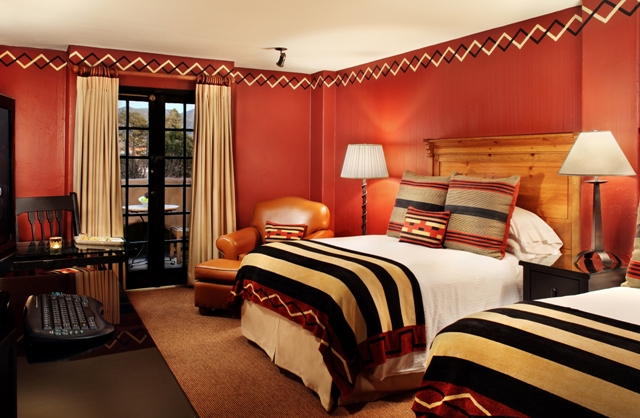 Rooms are not huge but many have sitting areas, and bathrooms are well-equipped and comfortable.  It says something for the design that mod cons like flat-screen TV’s seem discreetly subsumed by terracotta walls, stripey wool throws and local artwork – all the elements which draw the arty crowd to Santa Fe.

Although the Luminaria restaurant has an award-winning wine list and attractive terrace, Santa Fe is a place to eat out, given the many notable dining options, and it was hard to get strong enough coffee when breakfasting in.   The Living Room is a pleasing bar within the hotel to enjoy a nightcap,howver,  and there is a spa and heated pool to relax in after sightseeing.

The Loretto Chapel, a beautiful little Gothic church with an amazing spiral staircase is right next door, the Georgia O’Keeffe Museum is an 8-minute stroll away, and  the excellent Wheelwright Museum, with a dazzling display of Native American jewellery and neighbouring Folk Art Museum can be reached by shuttle bus.   But for many, the Plaza with its ad hoc concerts, jewellery shops, art galleries and cafes, is entertainment enough – and The Inn And Spa At Loretto is on its doorstep.

Tell me more about The Inn and Spa at Loretto