What do you pack for a stay at The Cary Arms and Spa? “The Inn on the Beach”, as the strap-line advises, gives some clues.

Pack a swimming costume for the beach and hydrotherapy pool, throw in some flip-flops – for beach walks and for fishing from the quay with angling equipment borrowed from the hotel.

Remember some sturdy walking shoes for the South West coastal path that wends its way along the red-rock cliff tops. Yes, that’s “The Salt Path”, even the wild blackberries taste of salt, featured in Raynor Winn’s award-winning non-fiction book, an inspirational tale of walking for hope. So that’s your reading sorted too. And as this is magnificent walking territory you can take the dog to the Cary Arms providing that he or she is well-behaved. There’s one particularly dog-friendly suite, with doggy bed, and some dog-friendly rooms too. Just as well there is a Dog’s Dinner on the menu: Beef, pork and couscous. 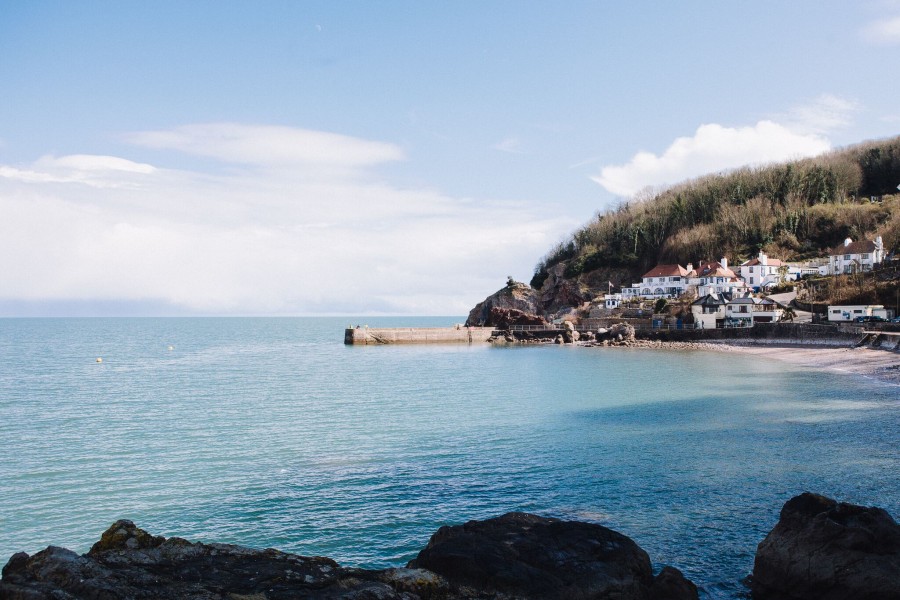 Perhaps if you’ve visited any of the de Savary’s other hotels, you will know that Peter and Lana have a penchant for displaying elegant artworks from the glamorous 1920s. Expect paintings featuring trim models with Côte d’Azur bathing hats and bathing suits, with a touch of Flapper Fashion, that were risqué by the standards of the time. And the gentlemen? Illustrations in the main house focus on tall, immaculate suits straight from the Cary Grant School of Tailoring.

But this time the de Savarys are doing coastal chic on a strip of shore, the English Riviera, honing grand aspirations. With palm trees, stylish motorboats whizzing across the bay for water-skiing, seas sometimes as azure as the Med and bobbing white spinnakers – this could by the French Riviera. Particularly so, if you crack open the complimentary bottle of rosé in the fridge and, if you are in one of the Beach Houses or Beach Suites, lie back on the sun lounger, on your decking patio, imagining that it’s Cannes or Nice or St Tropez. If rosé is not to your taste there is also a complimentary decanter of sloe gin to hand … 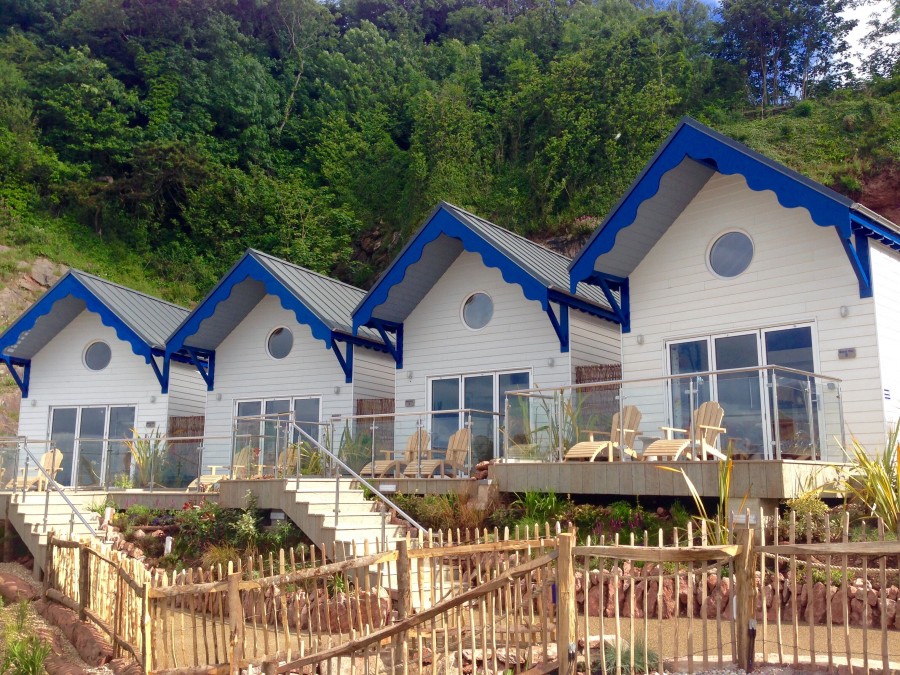 Once-upon-time the Cary Arms was a traditional English pub, that was rather popular with Victorian royalty. Designer Kathleen Fraser has added New England vibes to an Olde England hostelry as well as adding in a touch of Côte d’Azur sophistication. Fraser brings a bright, light aura of Hamptons’ simplicity which The Great Gatsby would recognise. In the Beach Houses, wall-to-wall glass door and windows make the sea view the focal point. White clapper-board walls, hand-carved maritime-themed ornaments such as a fish and a lighthouse extend the nautical theme. Surely, it’s time to give those regatta-style boat shoes an outing? 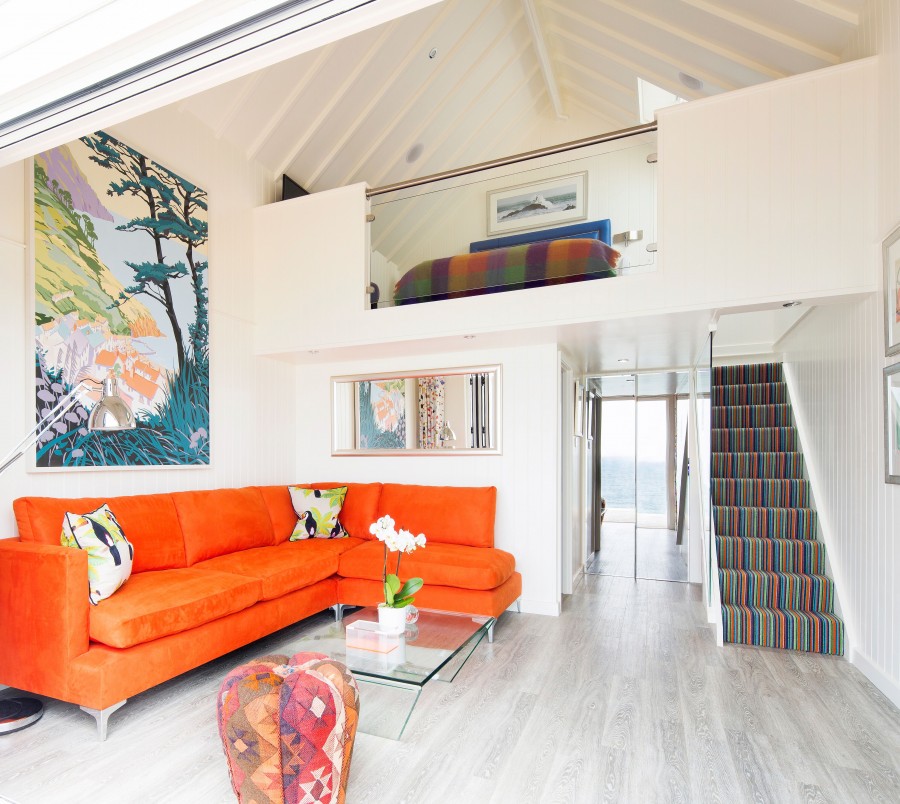 Upstairs in the duplex Beach Houses – there’s a ship style rope bannister to help you ascend – the bedroom, with a perfectly placed porthole, gives a sea view from the moment you awake. A plush vermillion headboard builds the feeling of luxury liner cruising.

Technology brings luxuries that the Great Gatsby would never have seen: a red mini SMEG fridge, coffeemaker, large rainfall shower and a discretely wall-mounted TV screen. Bonus points awarded for the miniature bottle of fresh milk in the fridge. Why can’t more hotels do that?

Back to wardrobe dilemmas. What to wear for dinner? If you’ve booked the Captain’s Table, an al fresco white-fenced podium giving supreme vistas over Babbacombe Bay, it is probably advisable to have an extra layer to hand for when the sun dips below the yardarm. Also, remember that you are on watch. It is your duty to ring the bell if a pod of dolphin frolic across the bay or Sammy the Seal drops in to fish by the quay. 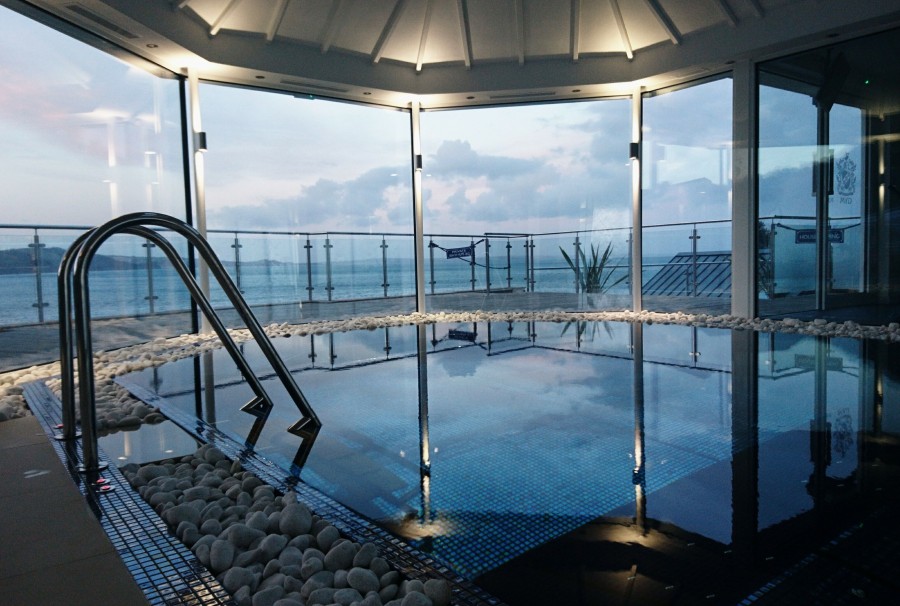 Although there will be a pianist tinkling away in the background the AA Rosette restaurant is not too formal: essentially, it’s a place to sample the freshest of seafood, perfectly presented by Steve Poyner, a chef who has never strayed too far from his Torbay roots. Though if hake, seabream or cod is not your thing there are also beef or lamb or an impressive range of vegetarian options. 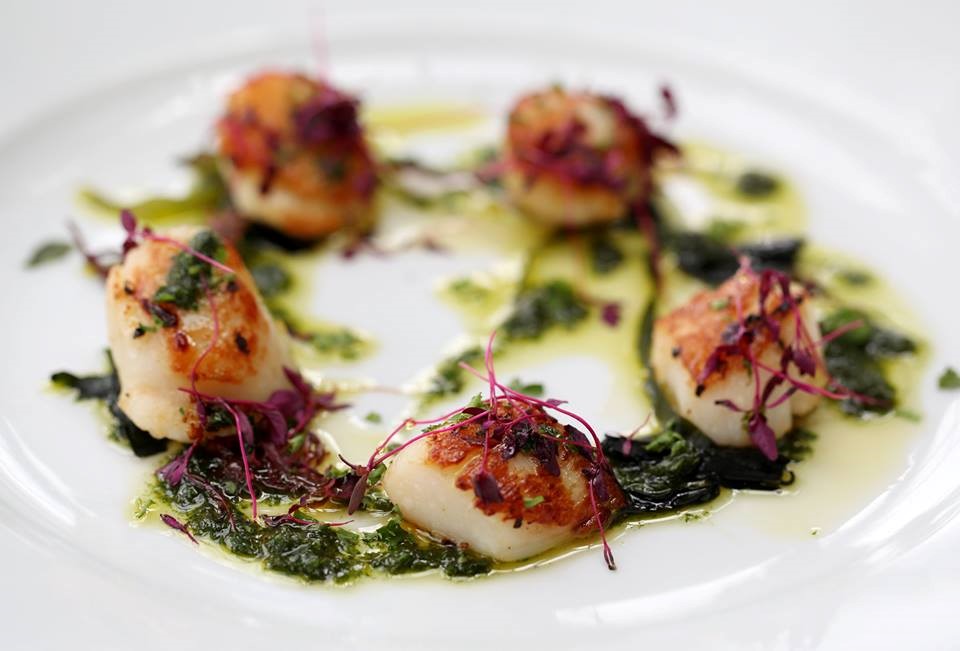 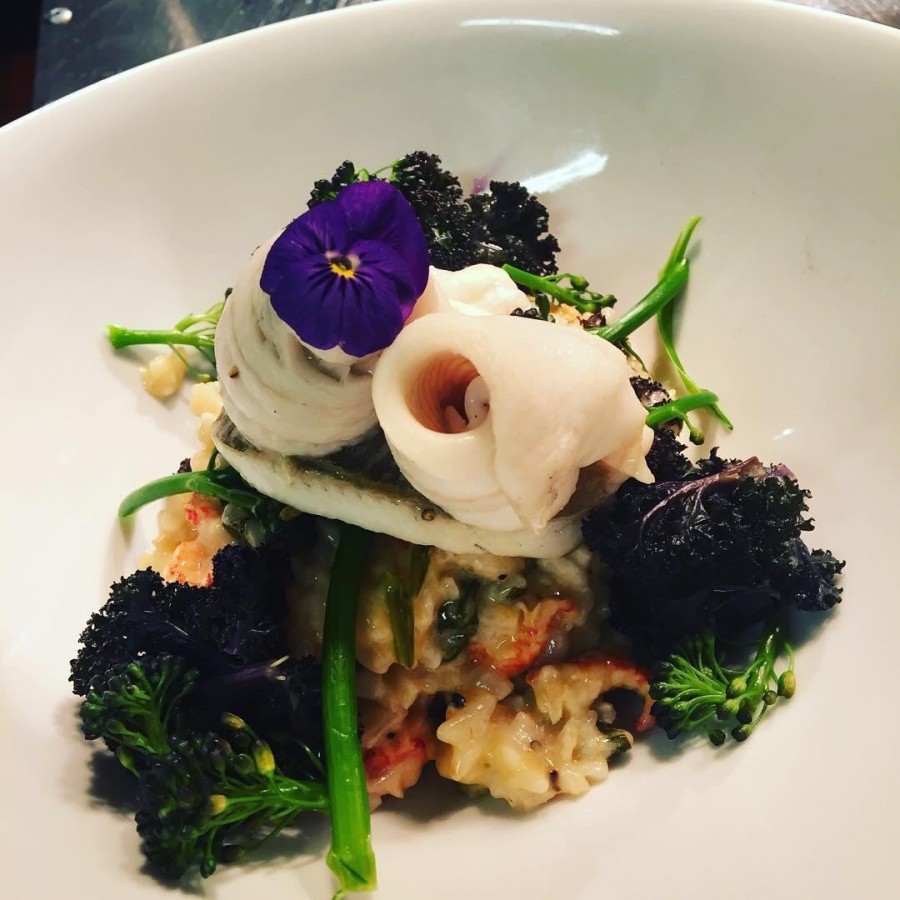 The Cary Arms probably boasts the UK spa closest to the sea, though products for the massages and treatments are hand-foraged from the Normandy coast. After a body-wrap, facial, massage or session in the steam room or sauna the only place to go is to the hydrotherapy pool. From there it seems as if the rugged coastline and ocean are just an extension of the indoor pool and its views across to Portland Bill on the Jurassic Coast.

Tell Me More About The Cary Arms And Spa

Rooms begin from around £250 per night including breakfast.

The restaurant is open to non-residents. Starters begin from around £7 with main meals ranging from around £16 to £30.

2 thoughts on “The Cary Arms and Spa, Babbacombe, Devon”