Unique Events, on behalf of City of Edinburgh Council, confirmed a feast of home grown talent will celebrate the 21st Birthday of the world famous event, which will welcome 80,000 revellers to the centre of the capital on Tuesday 31 December 2013.  Scotland’s Big Year starts here.

As well as celebrating 21 years of the world famous Street Party, Edinburgh’s Hogmanay is a signature event of the Year of Homecoming Scotland 2014, launching a packed programme of events throughout the year. Edinburgh’s Hogmanay Street Party offers an evening’s entertainment from an exceptional all Scottish line-up across stages in and around Princes Street.  The Waverley Stage will see a headline performance from festival favourites and Edinburgh’s very own Mercury Prize nominees Django Django, whose first self-titled album has been shortlisted for the Scottish Album of the Year. 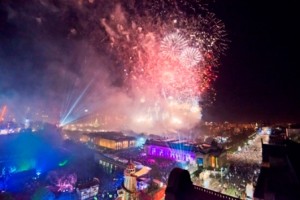 Django Django will be joined on the Waverley Stage by the UK’s hottest new act, Glasgow synth-pop outfit Chvrches, whose debut album, The Bones of What You Believe, raced straight into the top 10 in the week since its release, and by guitar-blasting perennial party favourites The Rezillos.

Kenny  Anderson, aka King Creosote, said “Pour yourselves a dram from those hip flasks, get ready to break open the black bun, but keep the coals tight in hand for King Creosote and his band are about to extinguish any lingering triskaidekaphobia in the run up to the bells of 2014.”

With these five live stages and countdown fireworks at 9pm, 10pm and 11pm, Edinburgh’s Hogmanay once again offers an exhilarating and eclectic mix of live entertainment which will climax with the singing of the world’s largest Auld Lang Syne and the spectacular Midnight Fireworks from the ramparts of Edinburgh Castle. Councillor Steve Cardownie, Festival and Events Champion said; ‘Edinburgh’s Hogmanay Street Party is renowned the world over as being the place to be at New Year and I’m delighted that this year we have such a strong contingent of Scottish artists who are going to help kick off 2014 with a bang.’

Pete Irvine, Director of Edinburgh’s Hogmanay, said “Scotland’s Big Year starts here and what better way to launch ourselves into the New Year than with a showcase of Scotland’s musical talent here in the home of Hogmanay.  Edinburgh’s Hogmanay will once again be the best New Year party on the planet  this year with a strong Scottish flavor – whether you’re from Scotland or much further afield, come and join us to welcome 2014.”

The early bird ticket offer for Edinburgh Residents will close on 31 October.  Until then, anyone living in an EH postcode can buy their Street Party ticket for the reduced price of £16.