22/08/2013This entry was posted in Europe and Middle East, Scotland, The Scottish Highlands, United Kingdom and tagged Best Golf in Scotland, Royal Dornoch golf on 22nd August 2013 by Andy Mossack.

Tom Watson once said of Royal Dornoch that it was ‘the most fun I’ve ever had on a golf course’. well, it might be Ok for Tom to go there and ‘have fun’, but for me it was quite simply a religious experience.


To think that golf has been played on this turf since 1616, (although the golf club itself was founded in 1877 when old Tom Morris came up here from St Andrew’s and put down 9 holes) makes you think of all the players through the centuries who have walked along here. St Andrew’s has its history for sure, but Royal Dornoch has remained in an unspoilt part of the north highlands for nearly as long. And it’s its remote location that has given it longevity and an almost iconic status in Scotland. Although surprisingly, it has never hosted a major championship.

It is a links ‘out and back’ course in two parts, it has lowlands running alongside the Firth and the back end of the course is up on higher ground and the views of the beach and the bay are simply glorious. Dornoch’s very fast raised greens are legendary and like all links courses, there’s plenty of gorse lying in wait.

A gentle but still tricky opener is the curtain raiser to a par 3 that is anything but gentle. At just 177 yards it is nevertheless a treacherous hole, with bunkers guarding a raised green that has a steep slope away to the right. 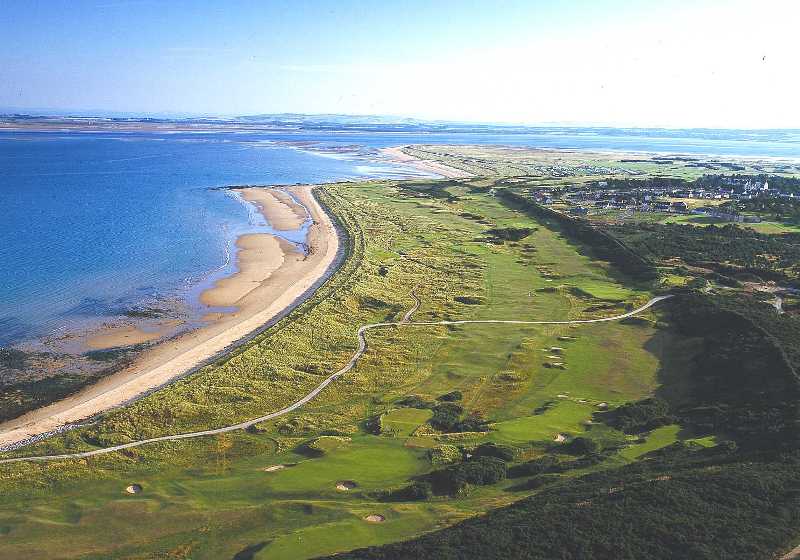 Another memorable par 3 is the 6th ‘Whinney Brae’ which heralds the upward section and makes you hit across a gorse strewn valley to a slippery green.

Then there is the long 14th, ‘Foxy’ which is unusual because it has no bunkers at all. The great harry Vardon called it ‘the most natural golf hole in the world’.

These days, Dornoch also has a second course, The Struie, which some say is just a stern a test. For me though Royal Dornoch is world class. It’s wild, it’s isolated and it’s an absolute joy to play.