Quite often when on holiday, I stay in a hotel and from there go and visit the local art galleries.  This conventional way of doing things was rather turned on its head during a recent stay in Amsterdam, as Grand Hotel Amrath is a piece of art in itself – a historic and architectural gem both inside and outside.

The building, which was completed exactly 100 years ago, was originally commissioned by six prosperous shipping companies for use as their offices, at a time of great creativity in the city.  Politicians and leaders were challenging the establishment to build a better society, resulting in an explosion of creative energy, now known as “The Amsterdam School”. 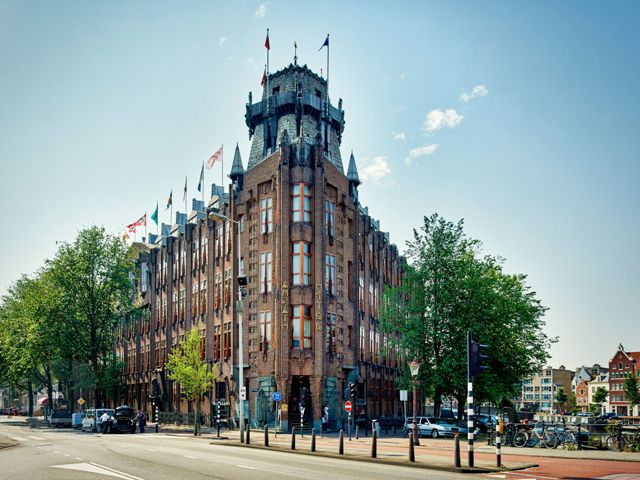 As this is the first building in this whole new way of doing things, considerable effort has been put in, to turn it into a luxurious modern 5 star hotel without any damage to the fabric of the building.  Varied solutions have been employed to do this.  In my modern bathroom, for instance an inside wall has been built so that the plumbing does not affect the original brickwork.

The booking office of the original shipping company is still intact.  It is easy to imagine the bustle and the excitement round the booths that sold tickets for ships going to the Dutch East Indies or perhaps Africa,  that set sail from the dock and canal just outside the window. 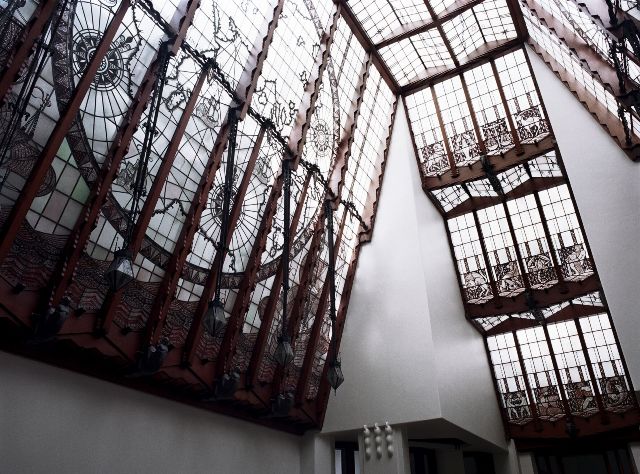 The shipping theme can be seen in every architectural detail from the incredible windows that show waves, stars and sea creatures and is repeated in the chairs, carpets and wallpaper. Wood panelling is everywhere and sculptures are even incorporated into the outside brickwork. 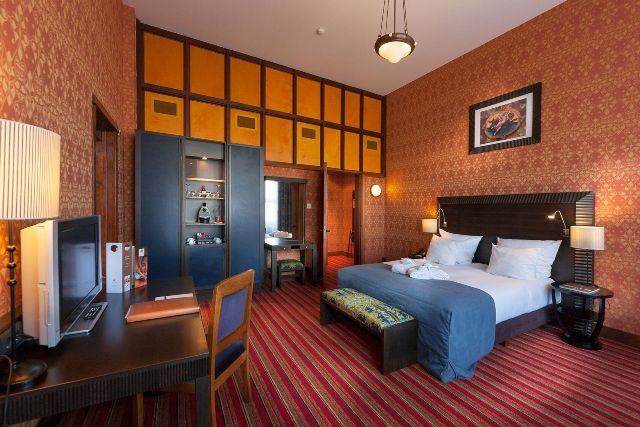 The beds are huge and comfortable and there is free wi-fi, while the Nespresso machines and the bar is included in the price and re-stocked daily.  Some rooms also have whirlpool baths and 4 poster beds.

The French restaurant looked good, although I did not have a chance to partake and there is a good spa with an indoor pool, sauna and hot tub.   My personal favourite detail is the original lift – which includes a stylish seat, – while those preferring a speedier service, have use of a modern lift as well.

Overall, I found the Grand Hotel Amrath to be a comfortable hotel, brimming with character and history and situated right  in the centre of one of my favourite cities.

Tell me more about the Grand Hotel Amrath

Rooms at Grand Hotel Amrath are from £170 including breakfast.

Getting to Heathrow Airport

Passengers can buy a ticket for the fastest route from central London to Heathrow for just £5.50 when buying a Heathrow Express ticket at least 90 days in advance at