Croatia’s many islands are legendary, but there is one particular island that gave up its island status to join the Istria mainland in 1763. The wonderful town of Rovinj had clearly decided it was rich and powerful enough to withstand Europe’s various wars and diseases, which through its island independence, managed to do so for centuries. .However Rovinj needed to expand and through some ingenious 18th century engineering it was connected to the mainland. More than enough reason then for me to begin exploring Rovinj Croatia’s little jewel..

We should really be grateful Rovinj was an island for so long, as much of its Venetian architecture has withstood the test of time. Even the Balkan conflict miraculously left it unscathed..

The old town, with its mess of twisty cobbled lanes and piazzas is magical. The way Rovinj’s ancient buildings manage to cling on to it’s egg shaped rocky peninsular is extraordinary. 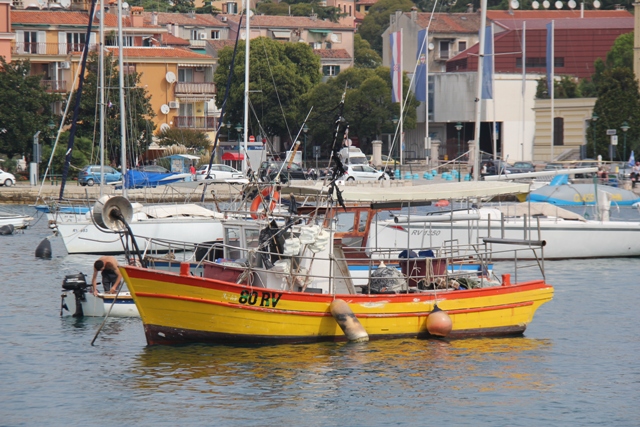 Still a working fishing port, one of the few remaining in the Mediterranean region, the numerous colourful batana’s, Rovinj ‘s indigenous flat bottomed boats anchored in the harbour, just add to its magic.

Perhaps the charm of Rovinj lies in its dual personality. Both Italian and Croat are officially spoken here; the result of centuries of rule by the Venetians and then the Kingdom of Italy (when it went by the name Rovigno) before finally becoming part of Tito’s Yugoslavia in 1947. This melting pot of cultures has created an intriguing blend; a distinct eastern European feel and the all-round celebration of life, love and food that is the Italian way. 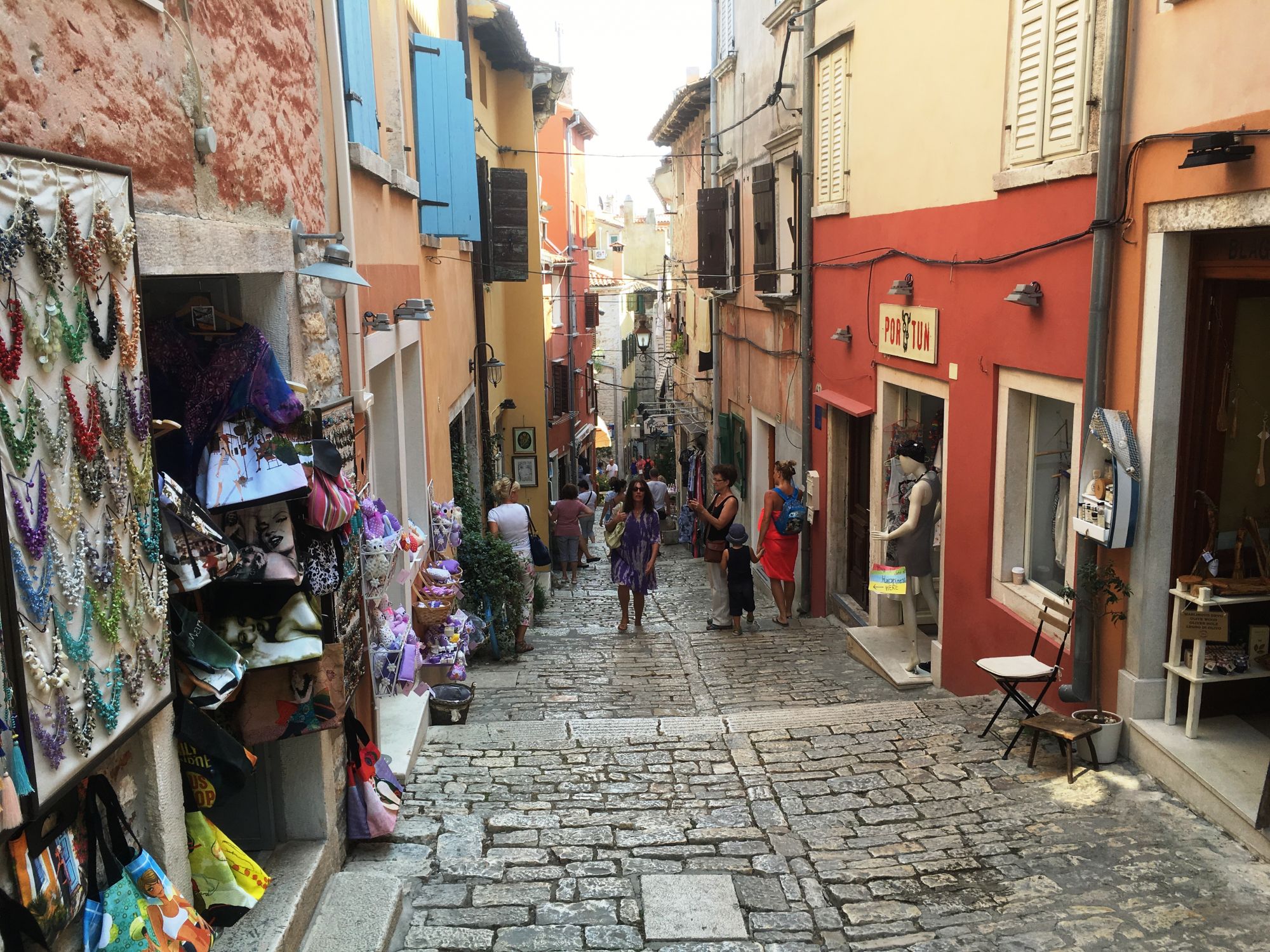 Lunchtime, and I’m sitting in the airy Brasserie Adriatic right on Rovinj’s historic harbour square where a large stage has been erected for this weekend’s celebrations.. It is Saint Euphemia Day no less, the annual celebration of the town’s patron saint. Euphemia was a young Christian girl who was captured and tortured by the ancient Romans  and ultimately thrown to the lions.

Miraculously they refused to harm her and her legend was born..Her relics reside in a tomb in the Baroque Church of St. Euphemia perched atop the highest hill in Rovinj. 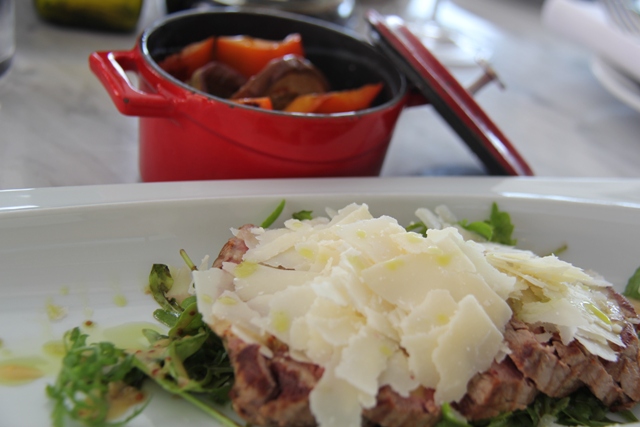 Brasserie Adriatic is part of the very classy boutique Hotel Adriatic and Alen, my waiter, is suggesting what I should be having for lunch. “Let us make you a rustic salad and a very tender beef tagliata with rocket, Dijon mustard and thinly sliced Gran Padano cheese”

It is an offer I hungrily accept and secretly hope it tastes as delicious as it sounds particularly as it is being washed down with a crisp cold glass of local Malvasia white.

I needn’t have worried. The tagliata is top drawer and a perfect way to spend a relaxing hour or two in the company of one of Rovinj’s best hotels. 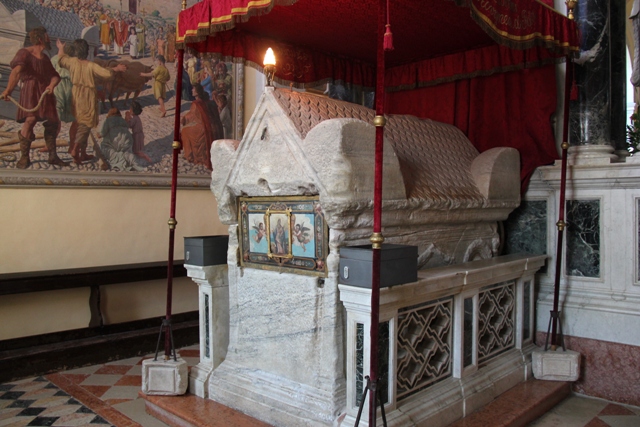 Intrigued about Euphemia’s legend in the midst of such celebration, I climb narrow streets up to the church and pay my respects to the good lady. She is so much a part of everyday life here. She even tells the town folk what the weather will be each day, as her statue serves as a wind vane at the top of the bell tower. A tower that is a replica of the one in St. Mark’s Square in Venice. “Believe me when I tell you if she is pointing toward town, the weather will be very bad the next day” a passing local tells me as I gaze up at the tower. 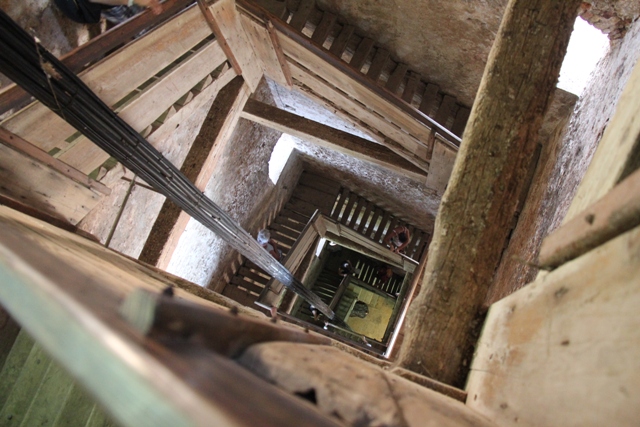 Today as she is pointing out to sea I feel it is safe enough to climb it to the top. I go inside and after climbing ancient and seemingly endless wooden steps and a very narrow ladder, finally emerge to a sensational view. The old town far below, the coast stretching out both ways and Rovinj’s archipelago of islands including Red Island and St Catherine Island in the distance. 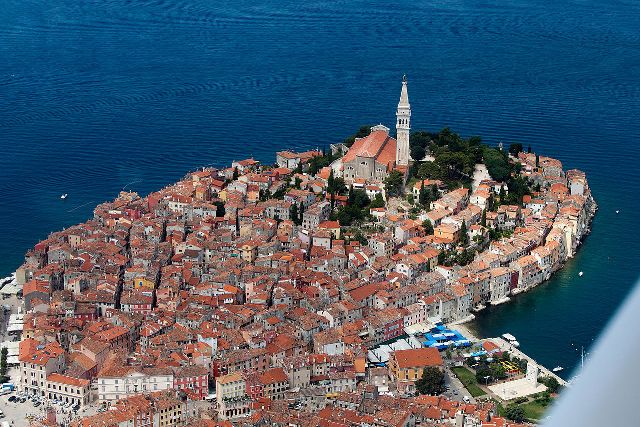 On the way back down to the harbour I stroll along the main old town artery Ulica Grisia where there are artisan shops aplenty selling everything from local art to pottery, jewellery and fashion. It eventually leads me to Balbi’s Arch, the best preserved of the original fortified town wall entrances.

But then I decide to just lose myself in the warren of courtyards, blind alleys and twisty lanes which make up the old town. It’s impossible to get lost, just look for the sea.

As we’re on the subject of walking, there’s a new promenade which runs from the old town harbour, around the coastline to the Golden Cape Forest Park. It is just a 20 minute walk (or you can hire bikes which many people tend to do here) taking in waterfront restaurants, bars and cafes, a few rocky beaches and more than a few impressive hotels. 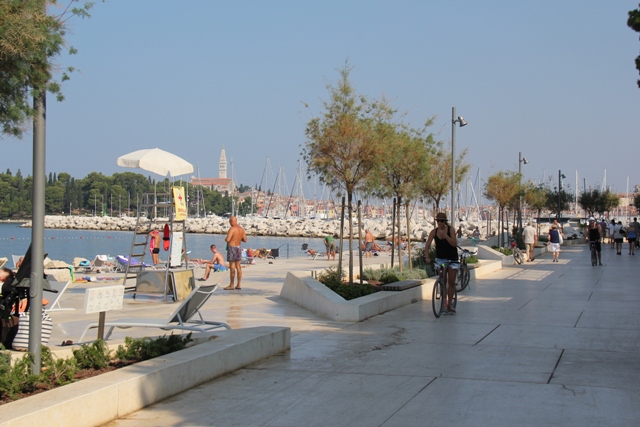 In fact, the whole region owes its regeneration to the town’s former tobacco employer  now a serious player in leisure and hospitality. Maistra is everywhere here, owning luxury hotels and restaurants  including the aforementioned Adriatic and the stunning design-led Hotel Lone and single handedly transforming the town to cater for popular tourism. Even the local seawater is filtered daily to keep it squeaky clean. It is serious investment and a masterful job.

Croatia is blessed with some magnificent coastline and in Dubrovnik and Split, two outstanding destinations. Yet, away from Dalmatia and its tourists and cruise ships, the Istrian coast offers something very different. The olive oil, truffles and seafood are world-class. And here in the very heart of it is Rovinj , a town I have fallen head over heels for. Exploring Rovinj Croatia’s little jewel has been a journey well worth taking. Yes it is busy in August, but in spring and autumn you will be hard pressed to find a more delightful place to spend some quality holiday time.

I think Saint Euphemia knew what she was doing  when her sarcophagus was mysteriously washed up at the base of the old town walls. She made a good choice to look after Rovinj , and I think as a result, it is doing very well thank you very much.

There are daily boat excursions to Rovinj’s islands directly from the harbour. Quo Vadis is a very good example : 2 hour cruise will sail pass Red Island and St Catherine Island and along the coast taking in the Golden Cape Forest Park.

Where to eat in Rovinj?

As I mentioned, the Brasserie at  Hotel Adriatic offers superb food for both lunch and dinner. There is an excellent outdoor terrace during the summer months. 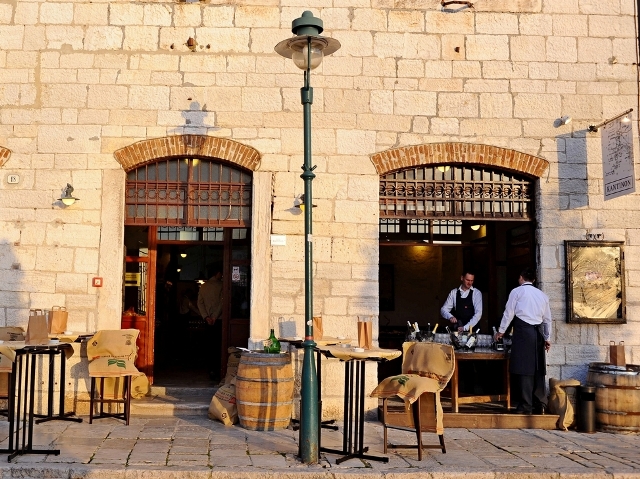 Another excellent restaurant is the Kantinon Inn directly opposite the tiny harbour. It is a rustic wine bar/restaurant specialising in Croatian /Istrian tapas, fresh fish and seafood and locally sourced cheese and cold cuts. There are many dishes served here you just will not find anywhere else in Rovinj.

How to get to Rovinj

Although Pula is the nearest airport (less than 50k away), flights by Ryanir are not that frequent and they will be seasonal too.  There are many more flights to Trieste in Italy including easyJet but the journey by taxi or car takes two hours, and you have to travel through Slovenia before entering Croatia. Right now (2016) there are still border controls at the Slovenian border so allow for some delays here. There is a slower coastal route which is very spectacular and worth using if you have the time.