How does a new Bailey Pegasus Ancona compare to another caravan? We sent our test family of Carole and Jason and their young kids Evan and Andy to test it against their own Abbey Piper.

Having emptied our Abbey Piper caravan of the essentials we needed, we hit the road to Bristol to pick up a Bailey Pegasus Ancona for a few days.  After a three hour drive we arrived at the home of Bailey and our two very excited little boys were in awe of the number of caravans and motorhomes stretching as far as their eyes could see.

“Are all these for us?” asked Evan. “No son, just that one.” He followed my pointed finger to our waiting Pegasus Ancona. It was fresh and gleaming and it made our little shack on wheels look very old and dated.  The boys had found a new love almost instantly. 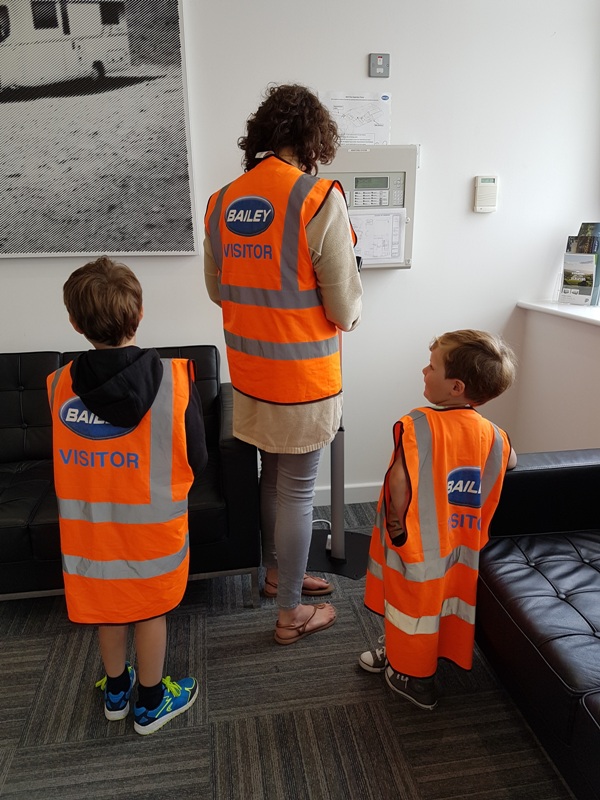 We hooked up and off we went to Devon for a few days.  Although it was slightly longer than mine, I found that my Ford Galaxy pulled the Ancona with ease.

It took us around half an hour to get things set up at our Devon site and it was all very easy.  The space for our family of four was perfect. The lounge was a great size and had a useful pull-out table at the front of the van for the kids to play on, or for me to use for my coffee  first thing in the morning. The excellent soft furnishings with curtains around each window made the Ancona feel very cosy.  Each of the spot lights  and small reading lights could be turned on individually or by a master switch.

It really was a little like being at home. 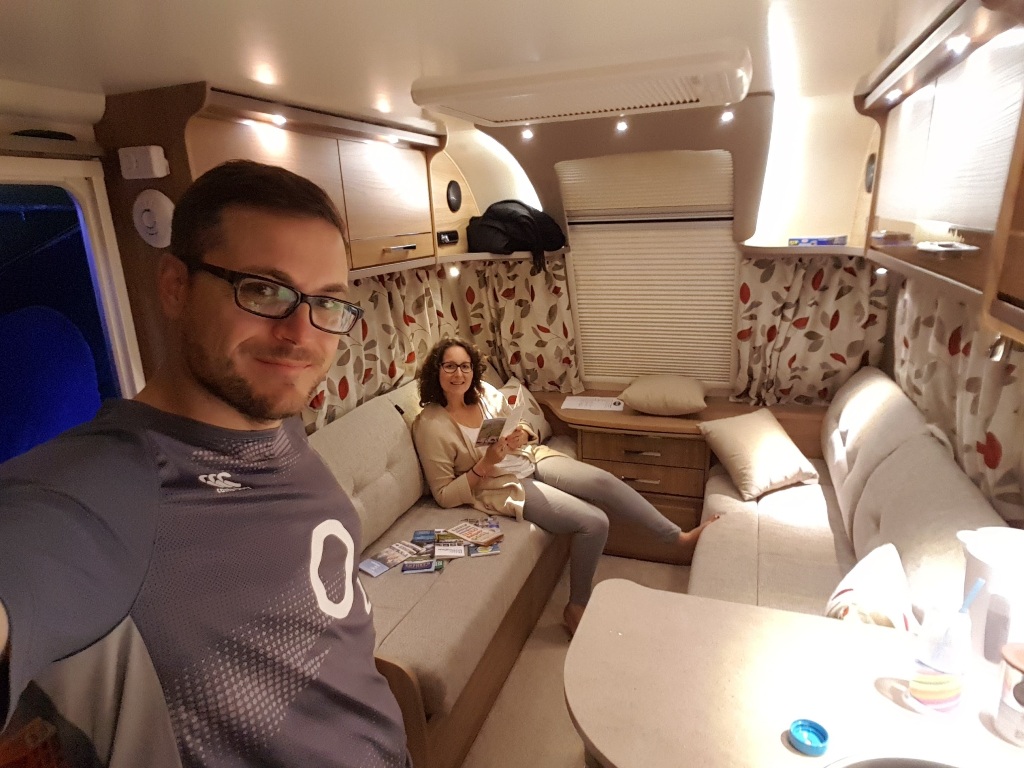 The pull-out double bed was easy to use. Pulling the slats out and flipping the lounge cushions was a very simple task and turned the lounge into a great double bed in no time.

I have to admit we all slept like babies.

The kitchen area and work tops were spacious and the cooker was state of the art, with both an oven and a grill. There was a built in microwave, and a full size fridge. 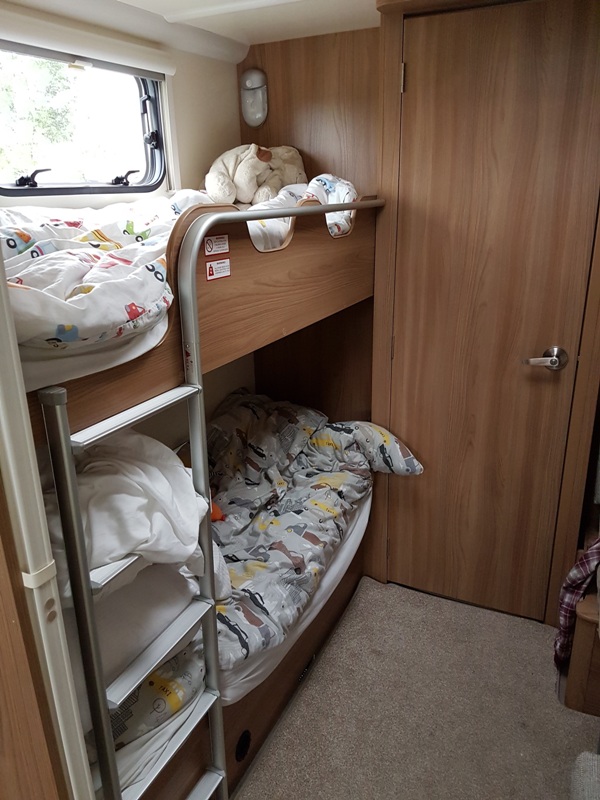 The boys found the fixed bunk beds at the rear of the van and after the usual argument about who was taking which bunk, they were both very satisfied with their choices. They even had their own reading lights.

On the opposite side was a dinette area for two, a good size table with lots of space for either a game or for breakfast.

Then there was the fitted bathroom.  Our own little house on wheels has a very small shower which we’ve never used because it’s never worked properly, so this was a five star experience in comparison. It was a glorious fitted space with a separate shower cubicle. I was also very happy with the water pressure. Clearly, a caravan shower will never be as powerful as a home one, but it was perfect for us and a real bonus not to have to drag ourselves to the shower block every day. 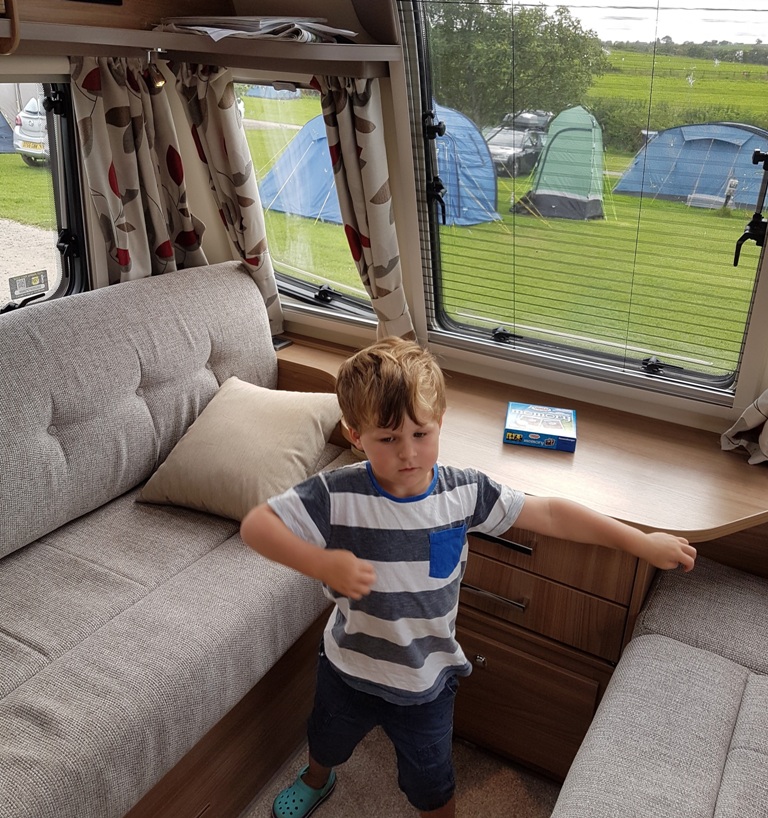 The Ancona was light and airy, plenty of windows and skylights all of which had fitted fly screens and blinds so at night time we could shut the light out and make it snug so the kids could drop to sleep without a fuss!  A nice added extra was the fabric door that we were able to pull across to divide the kids sleeping area with the rest of the van, it gave us a sense of separation.

Putting our awning up gave us much more space and when evening drew in we switched on the outside awning light; an LED which gave us more than enough illumination to light the whole interior.

Using the caravan as our base for the week, we were able to head off and visit some really nice parts of Devon such as Clovelley a stunning little town completely isolated and privately owned. 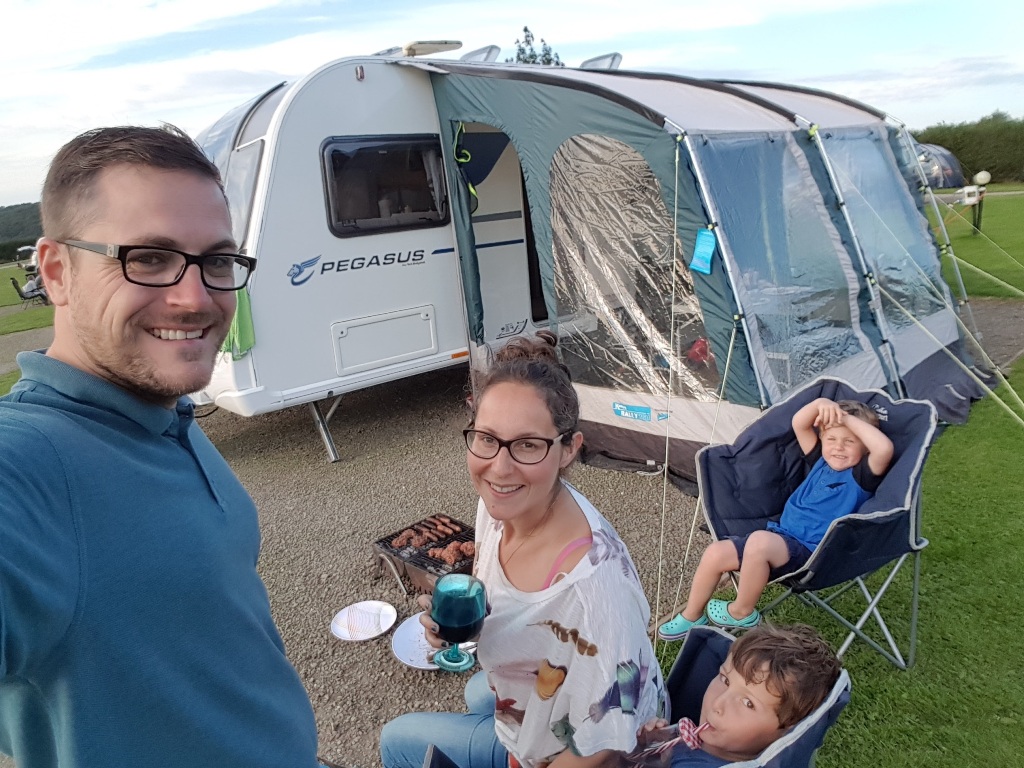 From time to time the kids got bored so we let them explore around the site on their bikes. As they cycled around it was so satisfying having lots windows at the front of the van, and lovely views across the site, so we were able to keep a keen eye on them both.

I can’t deny I fell in love with this van. The overhead storage lockers were plentiful and some additiona storage lockers under the beds made this van perfect for a family of four.

The Bailey Ancona made our trip to Devon go without a hitch  (no pun intended).

Tell me more about the Bailey Pegasus Ancona

The 70th anniversary Pegasus GT70 Ancona (which is the new version of Carole and Jason’s test model) retails at £19,799 and has a MPTLM of 1450kg – making it amongst the lightest range around and perfect for a wide range of towing cars.

Up to five 230v power sockets