Arbutus London is that rare thing, a Michelin-starred restaurant in casual dress. It’s as much a place to relax and have a good time over an interesting glass of wine as to enjoy gutsy food with big flavours. No tablecloths and minimal decor, with slightly incongruous butcher-block tables playing against mirrored glass in the back room and stunning urban photography in the cheerier front parlour. There’s no fuss, just friendly and professional service, with chef as likely to serve your food himself as the waiters.
This Frith Street fixture, along with its thrilling new integral bar, Les Couilles du Chien, is the brainchild of Anthony Demetre, whose Greek heritage saw him growing up eating hearts for dinner every week. But while there’s plenty of offal on the menu, there are plenty of refined dishes which have never seen an entrail. 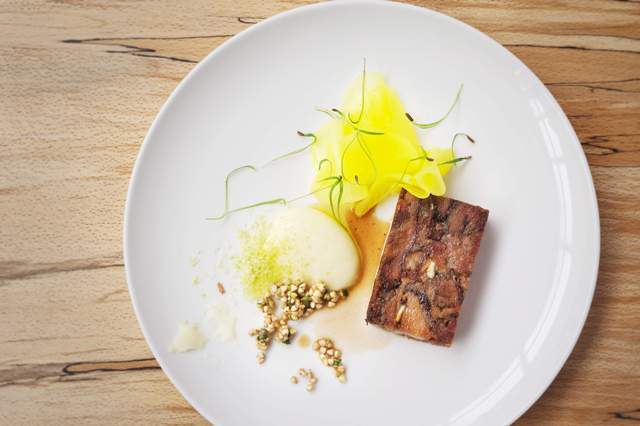 So while the warm, crispy pig’s head with potato foam is a signature dish, head chef
Patrick Leano also produces dishes of utter meatless delicacy, like a young cow’s milk burrata which practically oozes into the plate to dance with the Muscat grapes and candied walnuts dressed to partner it.
Likewise with the mains; it takes guts, so to speak, to offer pieds et paquets – a mix of lambs’ tripe, shoulders and trotters – to Soho sophisticates, but the carnivore among us found all the richness he could desire in pheasant counterpointed with Jerusalem artichokes and plums, some of the bird saved to fill a crisp little cigar of Moroccan-style pastilla.
Our other dish – cod simmered in salted butter with slow-roasted leek, egg mimosa and pink grapefruit, was as rich as a fish dish can get, and served to share, on our request, as a separate course between the starters and the pheasant we also split.

With an understanding that sharing is the name of the game these days as diners want to savour more tastes in a single meal, the wine list also offers every bottle as a 250ml carafe for two to enjoy a glass for a third of the bottle price. We enjoyed a pinot blanc from Josmeyer – great to see fine wine from Alsace on a London menu – and a Cotes du Rhone from Domaine de Villeneuve, both biodynamic, as this list is heavy on natural wines. Dessert wines are offered by the glass, and a Muscatel enriched our enjoyment of a rather sumptuous plum clafoutis.
For a restaurant which billed itself on affordability when it opened in 2006, Arbutus London is fairly pricey with starters at £8.50 and most mains around the £25 mark, but the daily special – £23 for two courses, £26 for three – served at lunchtime or pre-theatre until 6.30 – is an affordable way in to some of the most original and elegant cooking in London. And worth every penny at full price for a special night out.