Back in the 19th century, Kanoneiland, a lush island formed by a fork in South Africa’s Orange River was a bandits’ hideaway. A messy incident with a DIY cannon, during the Frontier Wars, gave the island its current name.

Today, in marked contrast, it is home to the peaceful oasis of tranquillity that is the African Vineyard Guest House: a place of romantic nooks and tranquil crannies.

“Slow living and slow-food,” preaches hostess Elmarie as she greets us before pointing to the welcoming decanter of sherry and glasses. Just forty minutes from Upington and its airport, regular flights bring travellers from Cape Town and Johannesburg, in search of relaxation in The Northern Cape. Visitors schedule a stop-over at the Guest House as they pass through the Green Kalahari on their way to the Agrubies National Park. Featuring the World’s sixth highest waterfall, Agrubies unsurprisingly translates as “The place of great noise.” 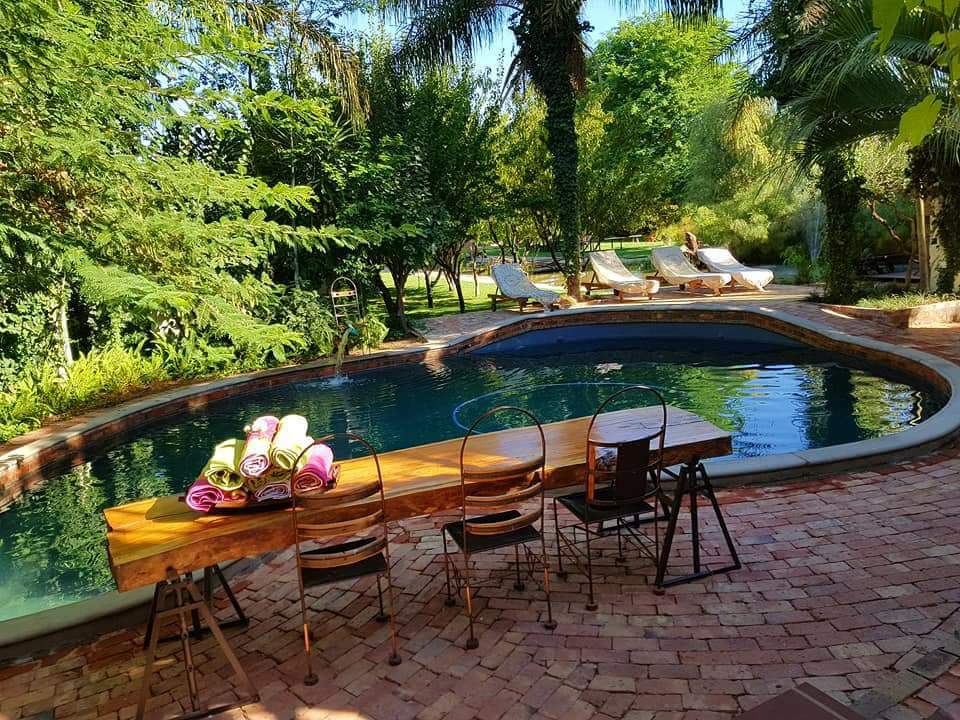 Elmarie has a simple vision for the Guest House – “As soon as you come through the door you should feel that you are at home not in a hotel.”

Local staff have been hand-picked from those who initially worked on the surrounding farm and shown potential. Elmarie is keen to ensure that the Afrikaans language is not lost to bland international English and gives locals opportunities.

“Lloyd was an alcoholic but we gave him a chance and trained him as a chef. He’s now been dry for 8 years,” she says proudly. It is a strategy that works. African Vineyard is now a recommended stop on the Kokerboom Food and Wine trail. A morning chorus of Fish Eagle, Olive Thrush and Namaqua Warbler wake guests for a breakfast that can be either taken in the dining room or on the terrace as the sun rises over the swimming pool. 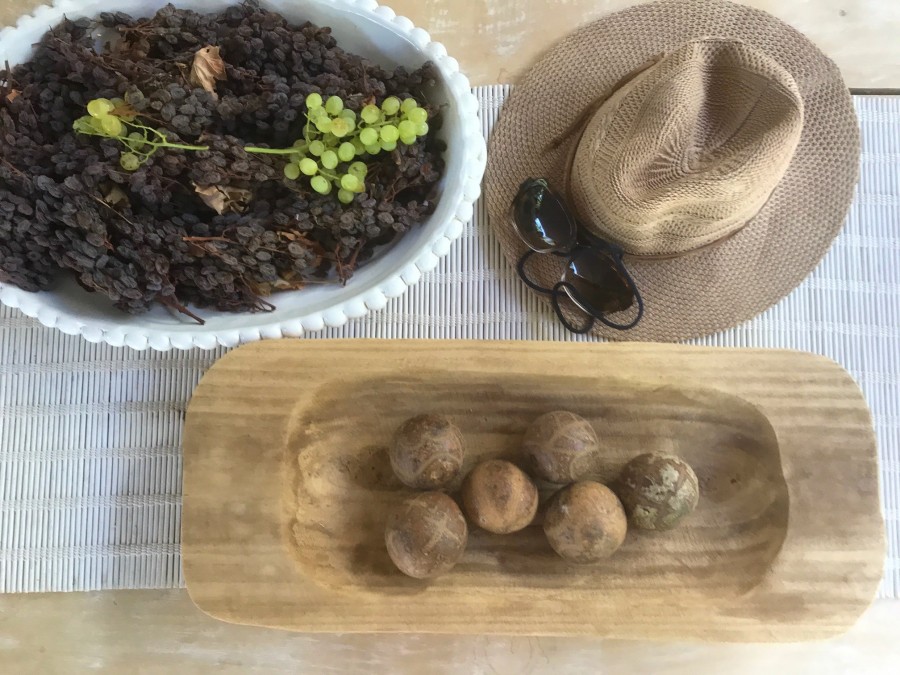 Meanwhile Thys, her husband, runs the surrounding 20 hectare farm. The first vines were planted in 1938 but the current collection of farm buildings only appeared in the 1970s.

Although the farm produces raisins – you can taste the sunshine in the sample Elmarie passes round – The African Vineyard is a tasteful paean to Bacchus. Every airy and spacious room is named after a grape or wine rather than identified with an impersonal number. A barn has a stylish new identity: split into three individually designed high and huge rooms, with industrial style copper piping complementing the original brickwork. The air-conditioning, vital in Kanoneiland’s warm climate, does its job efficiently and, most importantly, quietly.

Every room is unique but dark eucalyptus wood wardrobes, desks and chests of drawers are a common theme. Cushion covers with an antiquarian map of South Africa, overlaid with drawings of indigenous animals have many guests asking where they can purchase their own.

Another barn has been repurposed as a spa, with a range of treatments, emanating locally. There’s a Kalahari Red Sand Exfoliation treatment as well as massage options for hands, feet and body. Early bird and late owl treatments enable guests to prepare for their day or recover from it.

Beyond the garden of apricot, lemon and pear trees, beyond a wooden bridge crossing a stream sparkling in the sunlight is an Outdoor Spa. Couples massages are particularly popular, often as birthday or anniversary celebrations.

In a land where outdoor cooking is an art that inspired Braii-Master, a Masterchef spin-off, African Vineyard with its fragrant gardens is the perfect location for lamb chops, kudo sausages, maize porridge and fig jam. Nor has the wine, perhaps a Pinotage, had too far travel to travel. Away from urban light pollution guests dine under the bright stars of the Southern Hemisphere sky.

Although Thys is rarely seen at the African Vineyard his influence pervades the low, rambling house through his paintings and photographs. With no art Galleries in Upington, Elmarie and Thys host an annual art exhibition. The best artists are encouraged to display their work on the African Vineyard’s walls until its sold.

“Personal space is important,” Elmarie emphasises and The African Vineyard is full of quiet secluded spots where guests can disconnect from the 21st Century and where couples can re-connect with each other.

Tell me more about the African Vineyard Guest House

It’s 40 minute drive from Upington Airport with regular flights from Capetown and Johannesburg.

Prices start from R684 pp pn (around £40) based on two people sharing.