Early morning and I’m standing under the shade of an old silk-cotton tree in Arms Square in Old Havana. Legend has it; it was here under a tree just like this one that the first Mass for the city was held on November 16, 1519. Ever since it’s been a tradition for Habaneros to fill the square on the same date each year to walk around it three times.

In 2019 Havana celebrates its 500th anniversary and boy has it packed a lot into those years. A turbulent history has seen the Spanish, British and Americans occupying it at one time or another; from treasure-loaded galleons of Conquistadors on their way back to Spain to Mafia-sponsored booze and gambling before Castro’s revolution. Havana has seen it all and proudly wears her past on her sleeve. 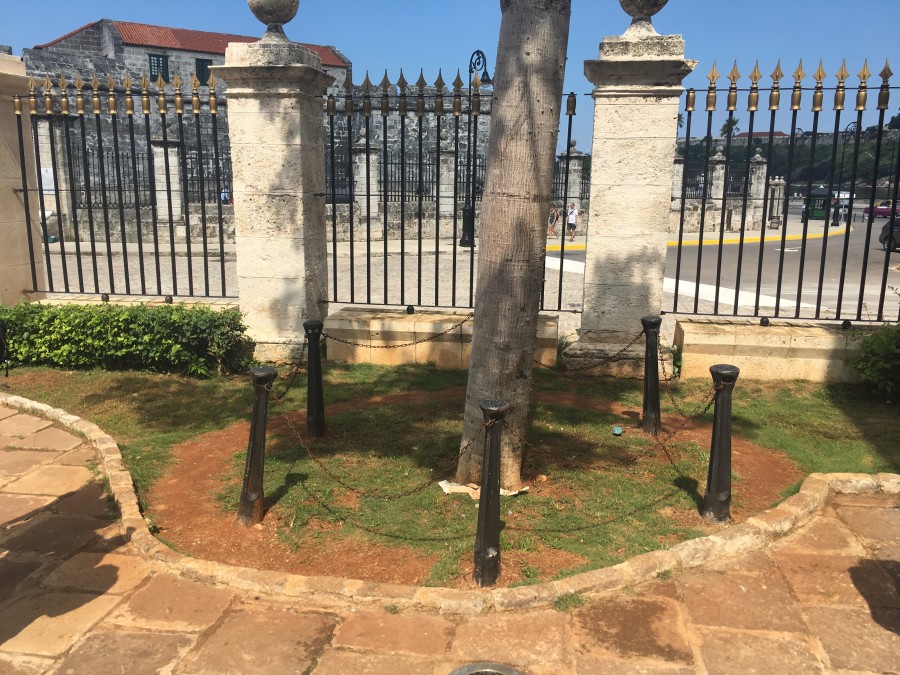 Someone once said, come to Havana with an open mind and let her seduce you slowly, and with me, that is exactly what’s happened. It’s been a slow-burn seduction and in the end, I’ve fallen head over heels.

This is a city where music literally seeps from every pore. It’s remarkable what a stand-up bass, an acoustic guitar, a set of congas and a pair of maracas can accomplish. In bars, in squares and along the legendary Malecón, the five-mile long esplanade embracing Havana, bands perform the beautiful rhythmic Latino music they call son Cubano. Not surprisingly this is the home of the Cha Cha, the Mambo and the Bolero. Sunset promenading on the Malecón is a traditional Havana experience.

Old Havana has undergone an extraordinary transformation. The beautiful pastel-coloured colonial architecture which has been slowly crumbling away is being painstakingly restored brick by brick under the watchful eye of UNESCO. A project began three decades ago is finally bearing fruit and now much of the old town is looking remarkably well, just in time for the anniversary celebrations. 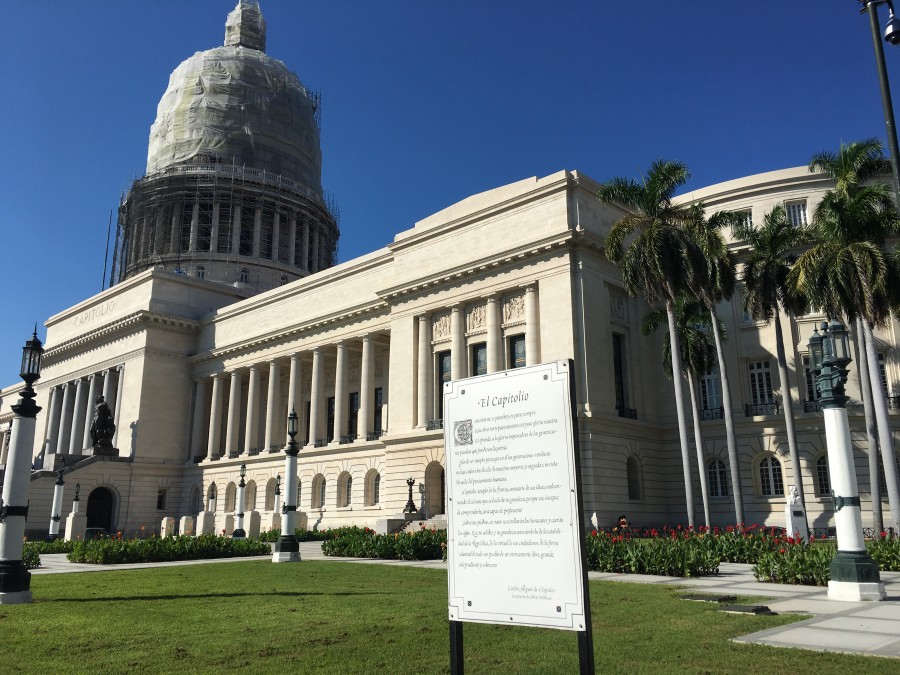 Taking an ambling walk from the new Mananza Kempinski hotel I cut across the Parque Central to the Capitolio. Ironically, based on Washington’s Capitol Building, it is a giant reminder of just how important and wealthy Cuba was at the turn of the 19th century. It was the seat of the Cuban government when it opened in 1929 and cost a hefty $17M. Today it is intended to house Cuba’s National Congress once more and is in the process of renovation. It is well worth joining one of the daily tours to simply gaze in wonder at the sumptuous Italian marble and workmanship that went into this landmark building. 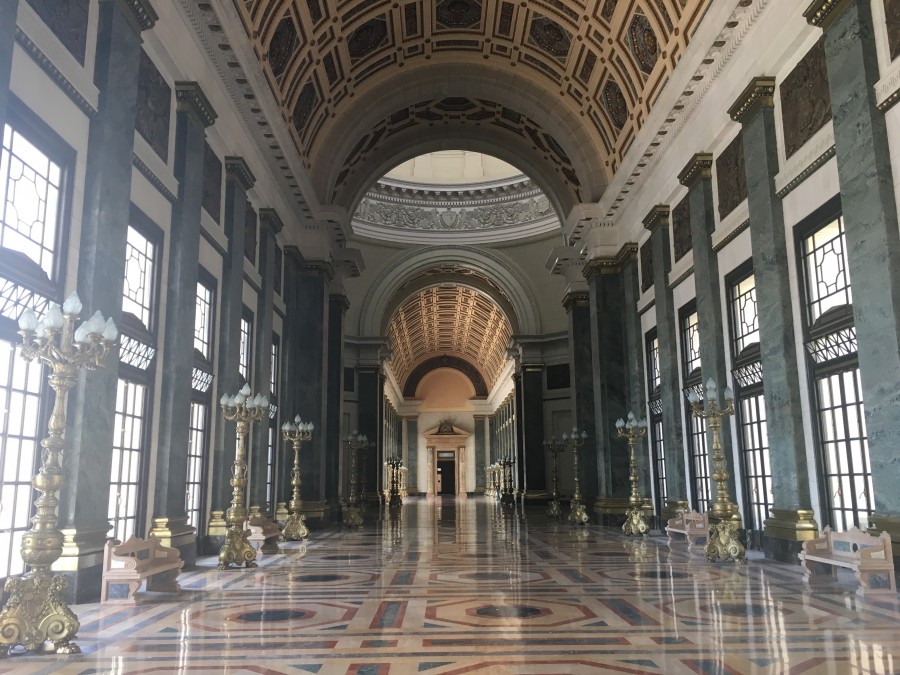 From here it’s just a short stroll to the Paseo de Prado, a Roman-straight boulevard that divides the city between Centro Havana and Old Havana. It was a street, lined with trees and marble benches, where wealthy Habaneros strolled down to the legendary Malecón. I use it to walk across to the Museum of the Revolution housed in what was once the Presidential Palace, where every President from Menocal to Batista sat in Office. Today it is a poignant reminder of how Castro and Guevara managed to topple the corrupt Batista regime and bring socialism to Cuba. The huge rooms tell the story of the revolution in words and pictures. I find Batista’s office, frozen from the day he fled, the most thought-provoking; especially the chairs in front of his large desk where Churchill and Nixon once sat. In the courtyard outside, bullet-ridden vehicles tell their own story, whilst in a separate building of its own the small boat Castro used to land in Havana with 80 men onboard has pride of place. 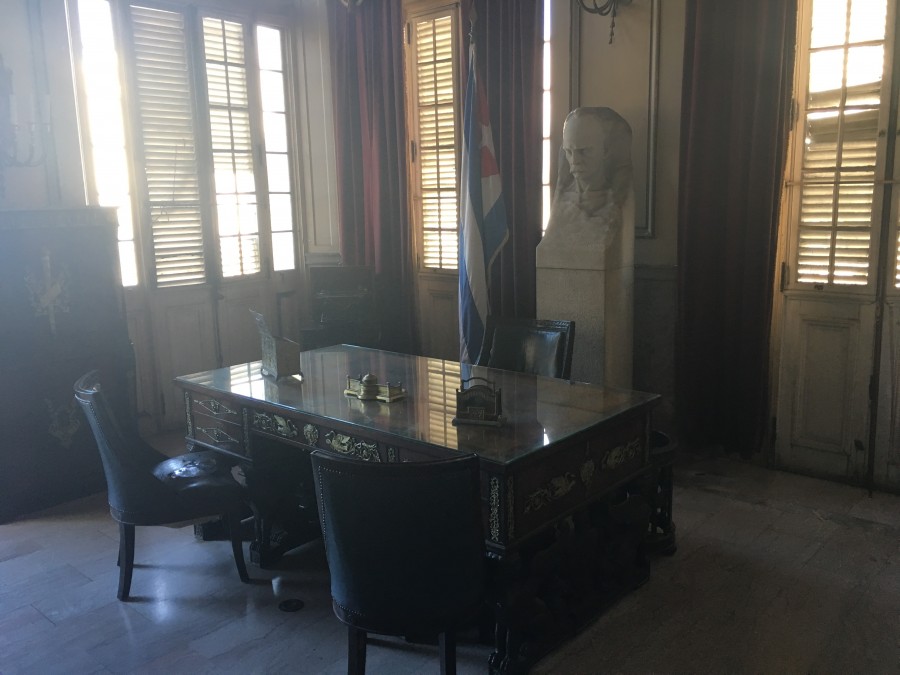 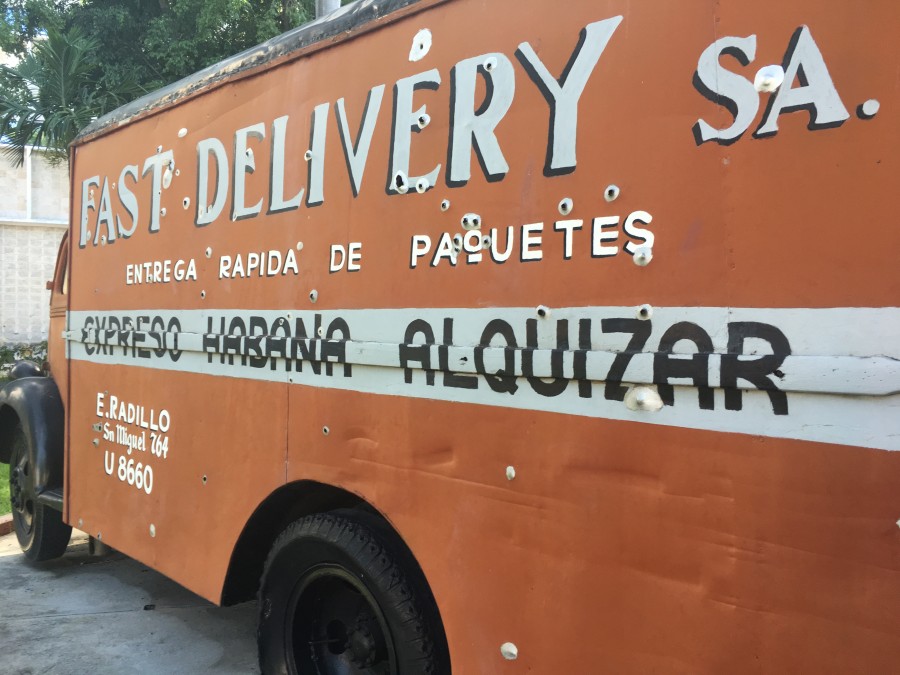 Deeper into the old city I find myself on Plaza de San Francisco, once the centre of the universe for galleons unloading slave cargo and later as the terminus of Cuba’s train service. Deeper still, another glorious plaza; Plaza Vieja, perhaps Havana’s most eclectic square. During the Batista time it was demolished to make way for an underground car park, but now it’s back and as beautiful as ever. I pop into a bar, La Vitrola, where placemats are actual records and listen to my hourly pick me up of Cuban live music while eating a tasty Cuban sandwich and sipping a mojito. 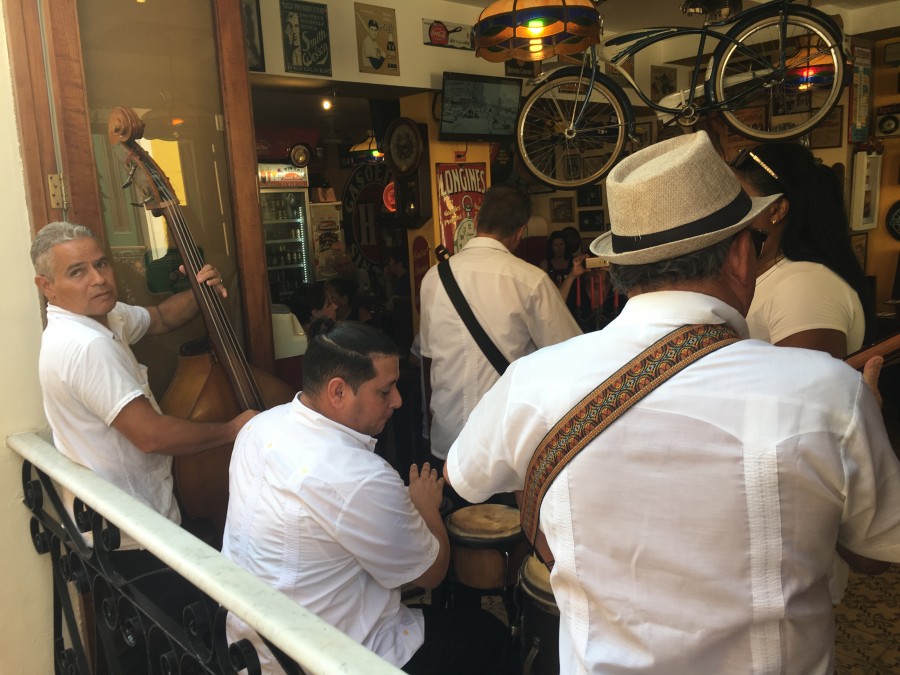 Taking a side street I find myself on Obispo, a main shopping thoroughfare. Not in the western sense you understand, no chains here. Most of the shops are state-run, but I find a few entrepreneurs amongst them offering everything from local crafts to Che t-shirts. On the corner is Hotel Ambos Mundos where Hemingway rented a room 511 for seven years. It remains to this day, exactly as he left it.

Another delightful shady square. A bench. And some gentle rhythms from the bar opposite, are enjoyable companions as I watch a cameo slice of local life roll by. In spite of harsh economic times, the locals somehow deal with it positively. It’s hard, as a tourist to really understand how tough things can be, but perhaps I spot a dose of reality. A bodega that provides basic provisions in return for state-issued ration cards. A chalkboard shows a list of goods and two sets of prices – one with ration cards, the other without. The difference is huge, the cards are few. 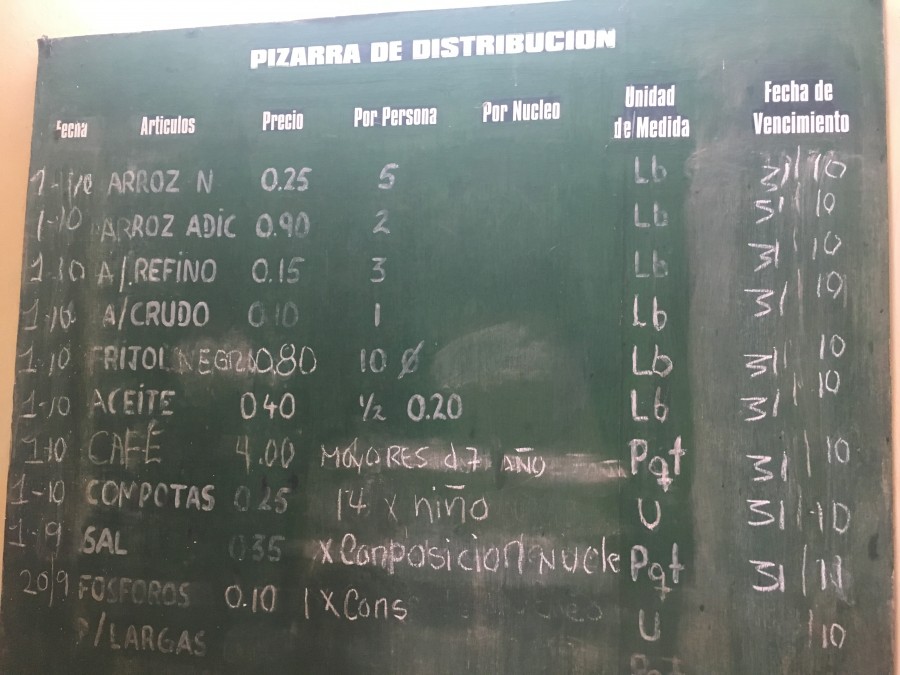 On my way back to the Kempinski Hotel. I pass the La Floridita bar  A favourite haunt of Hemingway and said to be where the daiquiri was first served. He might even have had a hand in creating it but one thing’s for sure, he enjoyed drinking more than a few here. Also nearby, the original art deco headquarters of the Bacardi brothers.

Havana is changing for the better but so is opportunity. There’s growing support for entrepreneurialism and there’s no shortage of takers. A hip new art and culture scene is exploding across the city perhaps led by Fabrica the brainchild of Afro-Cuban fusion musician X-Alfonso. A genius idea that combines rooms of modern art and performance with food and drink, inside an old vegetable oil factory every Thursday to Sunday night. 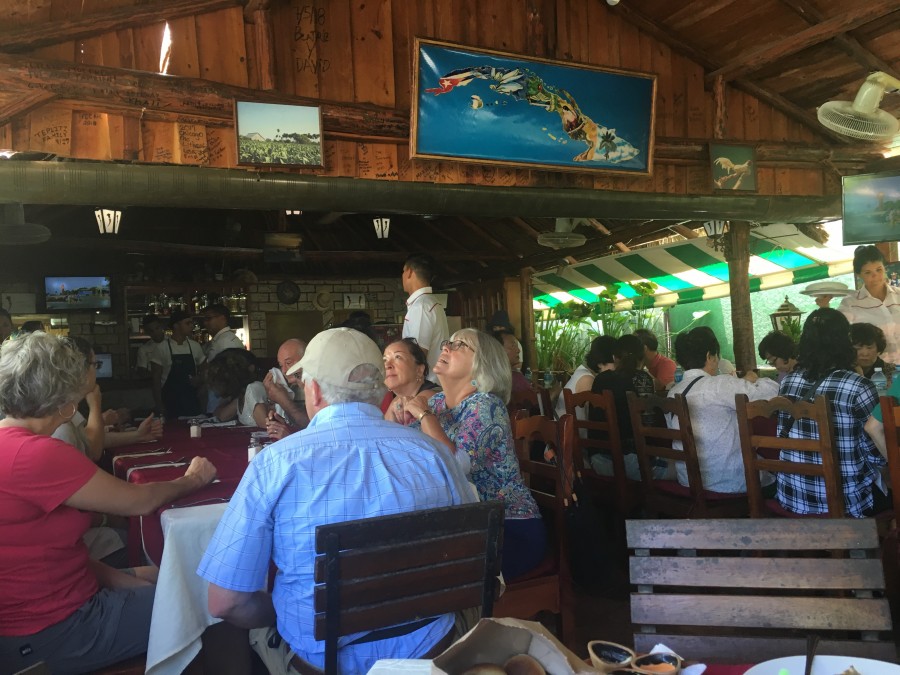 Another movement is the rise of the Paladar; high-quality restaurants run from people’s homes at very affordable prices. Cafe Ajaco is a perfect example. Really excellent local fare using fresh ingredients from a small organic farm run by brothers Julio and Jesus just a few blocks away. The restaurant even offers cooking lessons and mojito making as well as an excellent meal. It’s packed every day and a fantastic example of how Habaneros have grasped the opportunity of growing businesses. 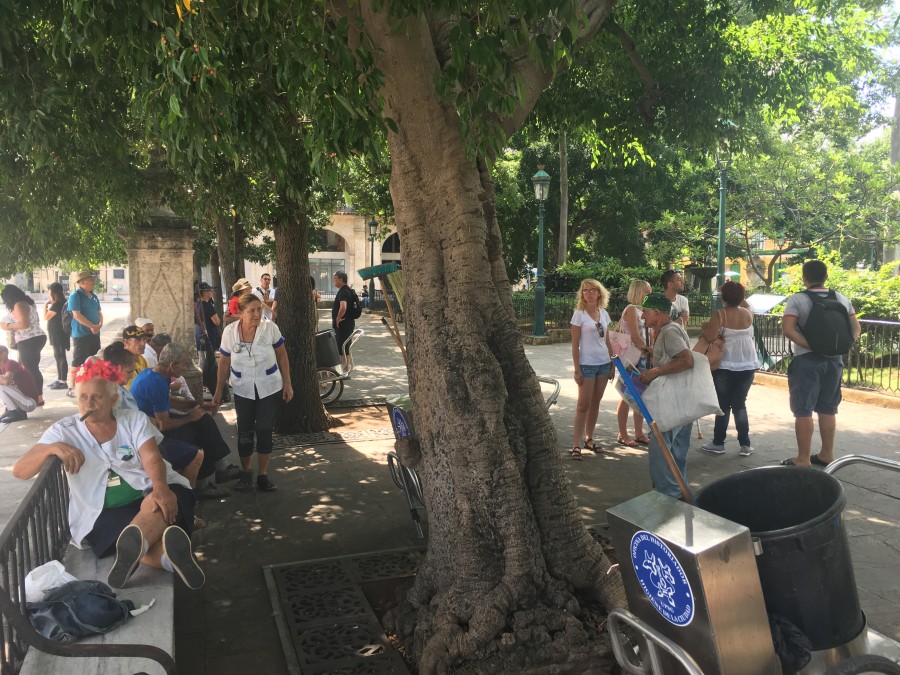 Back in Arms Square, the old silk-cotton tree has company; a guided tour. Just off to one side, a lady street cleaner is putting her feet up on a nearby bench and smoking a well-earned cigar. That my friends is Havana in a nutshell and I’m smitten.

Tell me more about Cuba and Havana

Havana’s 500th-anniversary celebrations take place during 2019. Information can be found at the Cuba Tourist Board

For detailed itineraries across Cuba, it is always best to use experienced tour operators such as Cuba Direct who can book flights, accommodation and tours and assist with a Cuban tourist visa.

Away from Havana Varadero is the nearest resort area. The all-inclusive adult-only Royalton Hicacos is one to savour, particularly if you go for the added VIP extras that Blue Diamond status gives you.

Air France offers flights to Havana via Paris Charles de Gaulle from 9 departure points across the UK, making it the easiest way to travel. Fares from London Heathrow start from £653 economy return including taxes and charges. To book or for additional information, please visit  or call the reservations line on T: 0044 207 660 0337