Wiltons has made eight moves since starting as a shellfish-mongers in 1742 in London’s Haymarket – a plenty swanky address in recent centuries, but back then, just that – a market selling hay.

Gradually morphing from street stall to fully-fledged restaurant, its peripatetic geography finally saw it land at 55 Jermyn Street in 1984, just west of the back of Fortnum & Mason’s, south of Piccadilly.  It was there, one year later, I first stood fixated by its very Frenchified dark brown wooden window frames, shiny brass fittings and iconic logo of a lobster with top hat and cane.

After eight years living in California, experiencing the rise of the new wave of table-turning chefs, such as Alice Waters and Jeremiah Tower, I wasn’t much looking forward to returning to the type of English cooking I’d left behind in the late ‘70s. 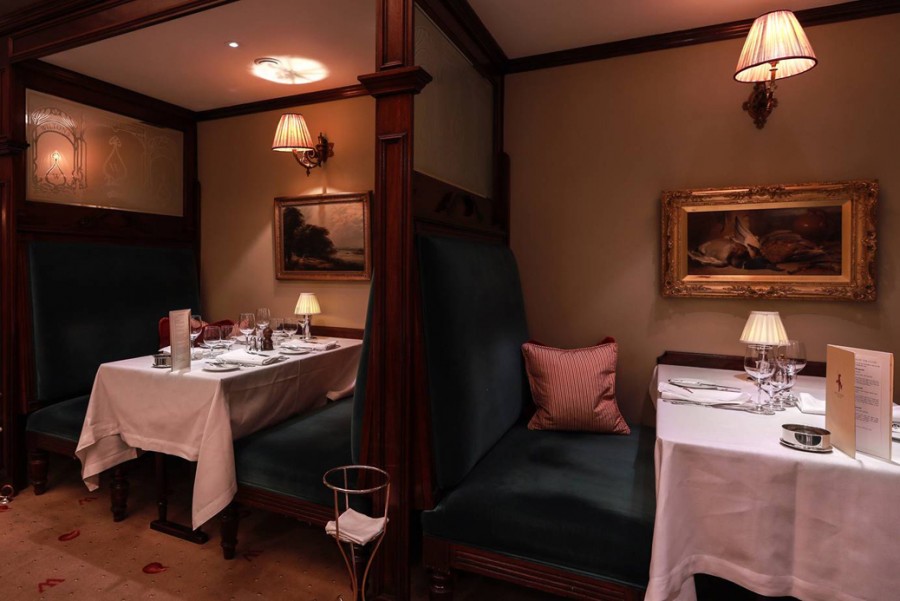 In London’s West End, the stuffy spaces given over to serving food in our “Grande Dame” five-star hotels were, by and large, still offering largely familiar takes on French classics, served by intimidating staff skilled in leaving you in no doubt as to exactly who was in charge of your dining experience.  Change was a’comin’, but it sure was taking its time.

My office was a few blocks from Jermyn Street, which I walked along every night on my way to Charing Cross station and, after that first sighting, I became more and more intrigued by what I was sure must be being enjoyed inside by Wiltons well-heeled patrons.  I moved jobs, “Modern British Cooking” took off and the sort of things I’d imagined coming out of Wiltons kitchens – luscious bisques, heaving platters of briny oysters, large pieces of juicy piscine or bovine protein, proper puddings – were quickly relegated to the status of comedy food, thanks largely to the wise-ass who came up with the phrase “School Dinners,” thus attracting a new class of clientele who liked a gentle spanking with their spag’ Bol’.

Now we have moved on from the later culinary crimes we may, perhaps unkindly, refer to as “The El Bulli Effect,” – foams, swipes, sneezes, soils, gels and all means of visual trickery – there is a growing desire for a return to the simpler days and ways of Wiltons, via the pure joy of, say, a properly provenanced, perfectly prepared tranche of turbot (£65.00), a lobster cocktail (£38.00) or crab dressed in its finest evening togs (£23.00/£34.50). 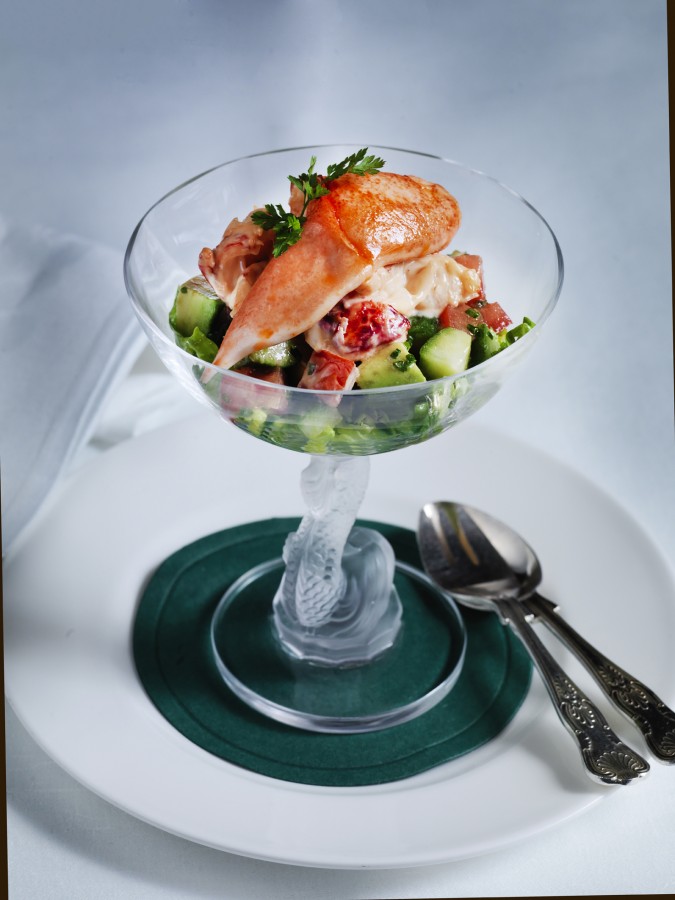 That first memory of peering into Wiltons interior never went away and now, almost 35 years later, I have finally ventured inside, past the lovely bar, replete with stools for those wanting nothing more than a few bi-valves (£16.50-£30.00/half-dozen, raw; £19.50/half-dozen, cooked; from Sept. 2) and a glass of Chablis (£12.00).

In my drool-inducing dreams, everything at Wiltons was perfect – and, I’ll be damned, it is.  The last time I had such a perfect start-to-finish dining experience was at L’Abeille, in the Shangri-La Hotel, Paris – and that has two Michelin stars and occupies an even loftier price league.

I doubt there’s a bad table in the house, but try, try and try again to bag one of the over-comfy booths with high wooden backs, engraved frosted glass, cushions in full plump and dark green velvet upholstery.  Staff are prodigious, knowledgeable and ever-eager to please, with the intimidation factor dialled down to zero – they even provided a fresh napkin on my return from the facilities. 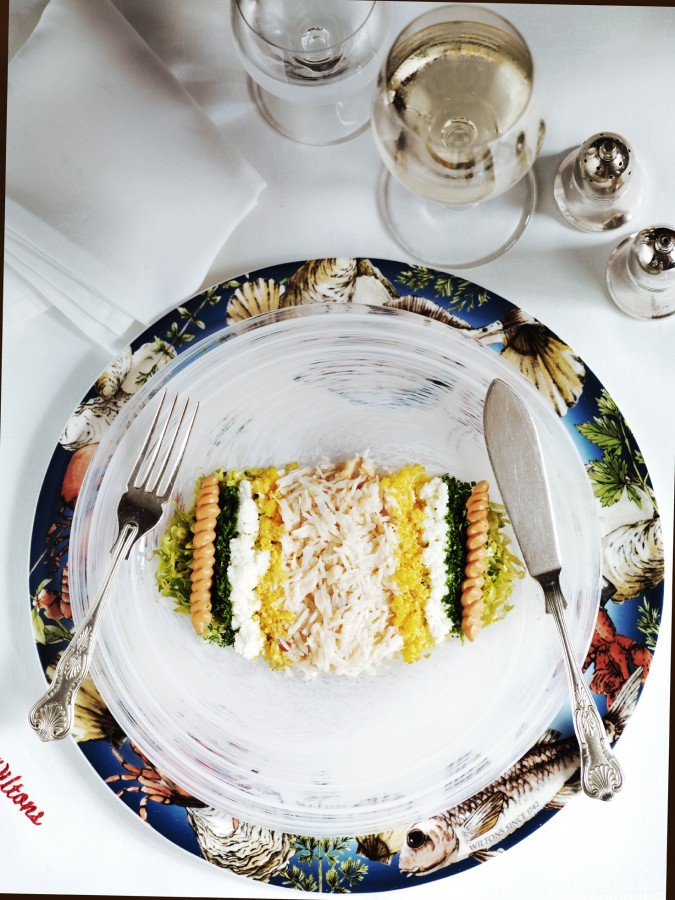 To start, a soup bowl containing nothing more than one chunk of cooked lobster meat was placed in front of my wife, before being filled with an exemplary, velvety lobster bisque (£14.00).  My crab hadn’t been dressed so much as whisked up and down Bond Street with Charlize Theron on hand for fashion tips.  A chilled silver bowl held a ceramic counterpart filled with parallel lines of finely-shredded lettuce, brown meat, separately-shredded egg white and yolk and, of course, flaky, subtle white meat, all topped with a dollop of that wonderful home-made mayonnaise with a hint of mustard found in French brasseries. Extra, very classy crockery was brought, unbidden, should we wish to share.

Now I know this is primarily a shrine to fish and seafood, but, given the time of year and a certain mellowness imparted by a delicately fragrant gin martini crafted from Hepple’s, of Morpeth, Northumbria (£16.00), we each opted for a seasonal special of whole roast grouse – served medium-rare and by far the tastiest and juiciest I’ve ever eaten – with all the bits (£48.00pp) – fried breadcrumbs blitzed to sand, suitably rich bread sauce, a game jus, strips of crispy bacon and the bird’s liver formed into a creamy mousse atop a crouton. 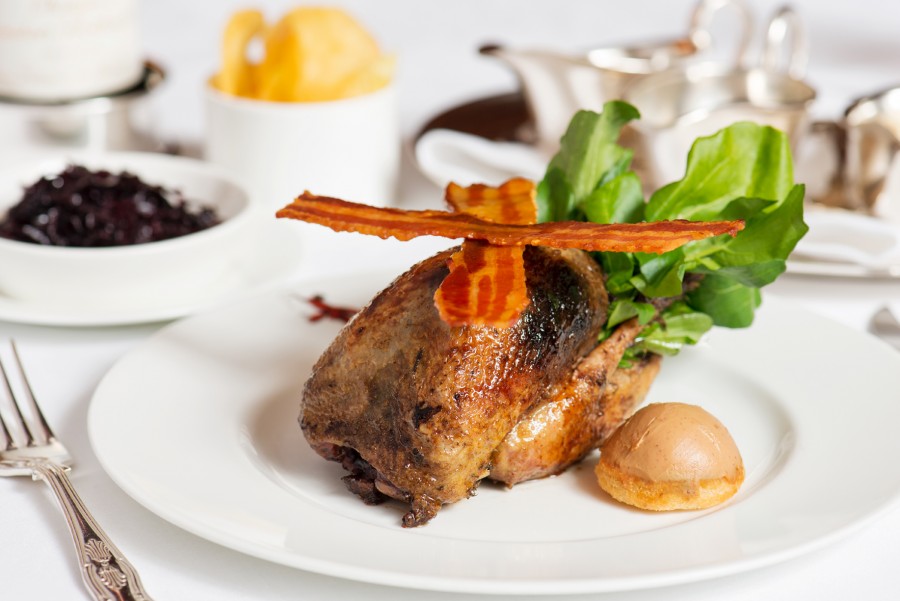 You may think it greedy to want more, but belts were loosened to accommodate sides of creamed potatoes (£5.50), leaf spinach (£6.75) and a glass of very superior Chateauneuf-du-Pape, Telegramme, from Famille Bunier (£25.00/glass).

Almost replete, but now suffering from the thorny problem of what to do with your stomach’s remaining Pudding Hole, individual tartlets filled with as-sweet-as-you-could-want raspberries appear, topped with burnished Swiss meringue and a sharp raspberry sorbet (£10.00).

Of course, it’s expensive.  Food and service of this level will never be anything else.  But, as discussed here before, one ticket to a recent A-list gig at The Royal Albert Hall cost me £120.00.  With Mrs Gerrie, that would have been £240.00.  The concert was very good, but I know which will linger longer in my fevered food brain and which I’d most happily shell out for again.

Tell me more about Wiltons Restaurant