In recent years the pilgrimage route to Santiago de Compostela, in the North West of Spain, has become increasingly popular. It’s known in English as “The Way of St James”, as the bones of the disciple are supposedly buried in the cathedral of Santiago, but to most people it’s just the Camino.

In fact there’s not just one route, as medieval pilgrims flocked here from all over Europe, but the most popular is the French Way. It starts in the village of St.Jean Pied de Port, climbs the Pyrenees, winds its way across Navarre, Rioja, Castile and Leon, before entering Galicia and arriving in Santiago. With a fair wind behind you, it takes just over a month.

Although the pilgrimage was originally a way of halving the time you spent in purgatory, most people these days are not doing it for religious reasons. It’s seen more as a rite of passage, a way of finding yourself, getting away from the distractions of modern life and discovering your inner being. There’s also the social aspect, as there’s a sense of great companionship on the trail and indeed, with over 500 people a day trudging the route, you don’t really get the chance to be alone. 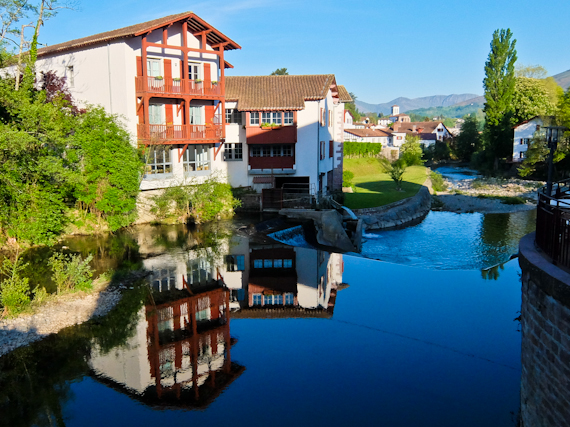 Wanting to get a taste of the route, without doing the whole trek, I am working with Follow the Camino, who will not only transport my bags, but also whisk me over the boring bits. In fact many people don’t have the time to do the whole lot, so return year after year to do one week sections. Accommodation varies from dormitory beds in Albergues, often costing a few Euros, to luxury rooms in Paradors, with a great deal of choice in between. There’s always food along the way with most places offering a three course pilgrim menu for around ten euros.

I start at the beginning in the attractive French village of St.Jean Pied de Port and collect my pilgrim’s passport from the Camino office. The idea is that you get it stamped at each of your overnight stops and present it at the end to get a certificate. Since I won’t be doing the whole thing, I won’t really qualify but it will make a good souvenir of my journey. Outside, budding pilgrims are scrutinising the over-priced outdoor shops, worried that they might have left something vital behind 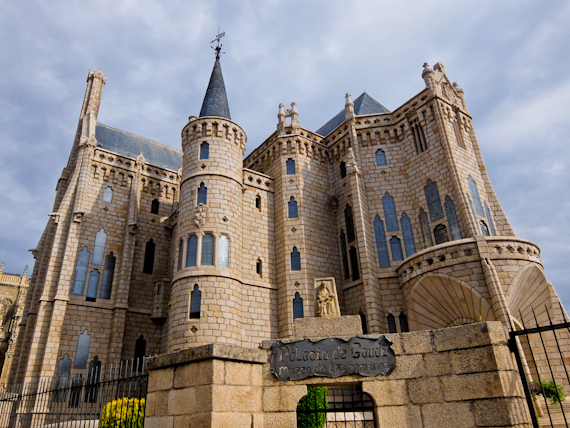 The path climbs steeply as it traverses the Pyrenees and this is one of the hardest sections of the walk. It reaches a height of 1050m before dropping into Spain and reaching Roncesvalles, where there’s a huge abbey church and the first overnight stop. Even though it’s April, there are already a lot of people on the trail, all plodding purposely forward and, compared to me, completely overloaded. It seems that this is not a trail that attracts serious hikers, as there’s too much monotonous road walking, rather it seems more a trial of endurance. 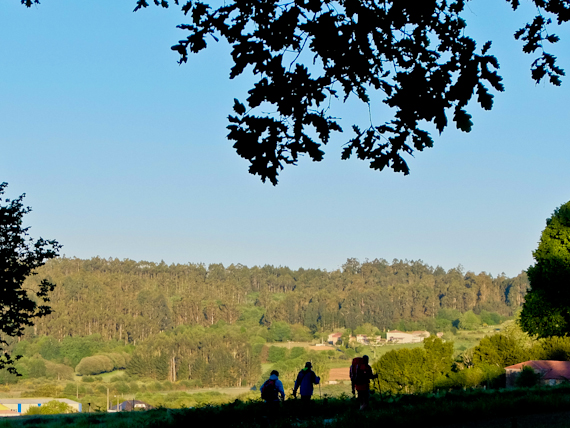 Don’t get me wrong, there are some beautiful sections, including the next few days down from Roncesvalles, through beech and oak woods, passing through immaculate Basque villages, houses all in white with red or green shutters. But there are a number of large cities, like Pamplona, Logroño, Burgos and Leon where the tramp through sprawling suburbs on the side of busy highways is slightly gruelling. However the rewards come in the shape of magnificent cathedrals, ruined castles and medieval streets, not to say excellent food and drink. 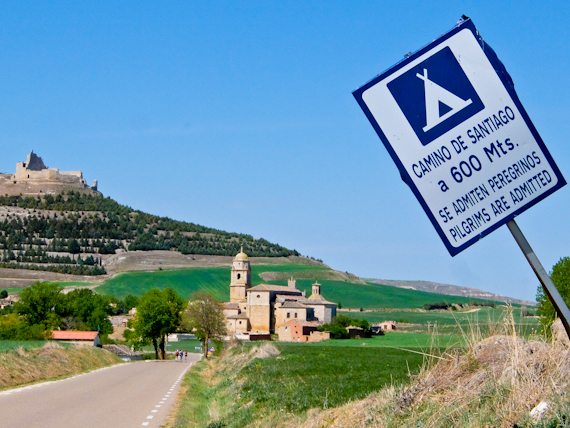 People I meet doing the entire route tell me that the most difficult challenge is motivating yourself every morning to carry on putting your feet forward. I begin to see what they mean when I leave Burgos and enter the Meseta, a barren tableland at an elevation of around 800m, with no shade and howling winds. There’s little respite until the city of Leon where the landscape begins to change and snow-capped mountains loom on the horizon. You begin to climb and finally reach the highest point on the Camino, marked by an iron cross. You’re supposed to leave a stone you’ve carried from home at its foot, in theory absolving you of your sins. 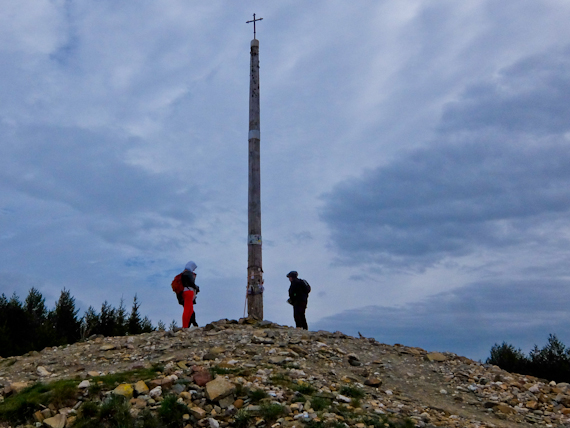 At Sarria, in Galicia, I’m just 100 km from Santiago and it gets even busier. For those who want the certificate, they can start here, walk the last five days and still qualify. It’s a calming section of the walk, through green rolling hills and broad meadows, the wooded pathways providing plenty of shade. I begin to sense muted elation among the pilgrims since they’re near to reaching their final destination. Some of them look like war veterans, with couples supporting each other as they limp ever further forwards. 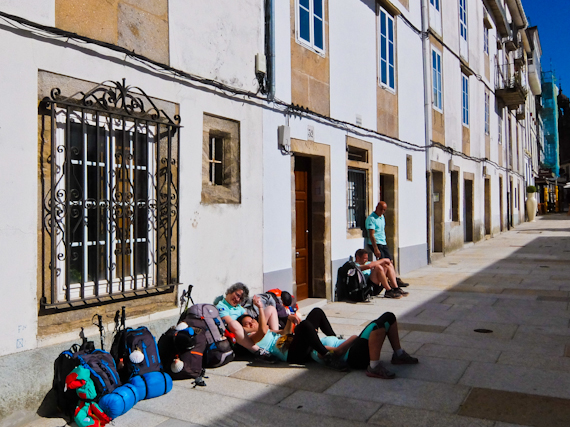 On my last day I rise before dawn, hoping to cover the last 21km, in time for the midday pilgrims’ mass at Santiago Cathedral. There seems to be more uphill than on previous days and I’m conscious of blisters developing as I try to beat the clock. I make it with minutes to spare and join the queue of worshippers at the entrance. All the seats have been taken but I rest my tired limbs by squatting at the side of a pillar near the altar. 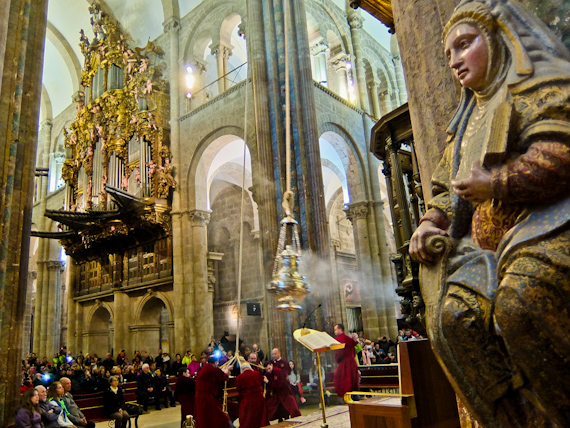 Even though I’m not remotely religious, it’s an uplifting moment when the service starts, and weary pilgrims struggle to stand. If they’ve claimed their certificate, then their country gets a mention from the priest, although it seems that no one has arrived from the UK. At the end of the service, eight red robed men pull on ropes to swing the famous Botafumeiro, an incense burner weighing 80 kg. It flies high over my head, almost hitting the roof, and I’m engulfed in holy smoke.

Tell me more about walking the Camino de Santiago

Ryanair flies to Biarritz, the nearest airport to St. Pierre de Port, from London Stansted. It also flies back from Santiago.

The Stansted Express is the fastest way to get to Stansted.

EasyJet flies from Santiago to Gatwick.

The Gatwick Express is the fastest way from the airport.

Follow the Camino operates 9 main routes to Santiago and covers all accommodation, transfers, maps and walking notes. Guided groups start from €750 per week with self-guided from €430, not including flights.