Brian Berkman goes seeking the Big Five and finds the Thornybush safari lodges COVID ready
South Africa’s protected wilderness areas were hard-won by Paul Kruger who was President between 1883 and 1900. He had initially hoped for a far greater piece of land but political opponents only granted about half of what he proposed.

Over the years the abutting land was initially purchased by farmers, but livestock soon died at the hands of lions and other predators and elephants would destroy fences. Sleeping Sickness brought on by the now eradicated Tsetse fly would attack cattle and also sicken people. The African bush then was an inhospitable place. 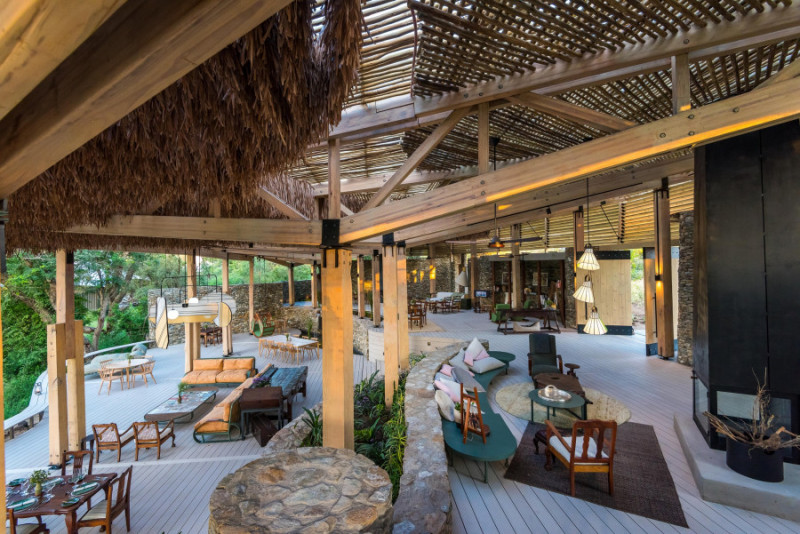 So different from what you will have seen elsewhere, the 10 200m2 tents were designed by the acclaimed Silvio Rech and Lesley Carstens Architecture and Design team, as a one of a kind project.
The tents have a double canopy lined with bespoke fabric created from the archives of the university’s herbarium – glass sliding doors, each with protective mesh screens to let in all the sound and air but none of the bugs, and an interior where each element – the colour of the deep Victorian-style bath to the specially designed cupboards are simultaneously nostalgic and entirely modern. Even the tent’s air conditioner is painted to disappear from view. 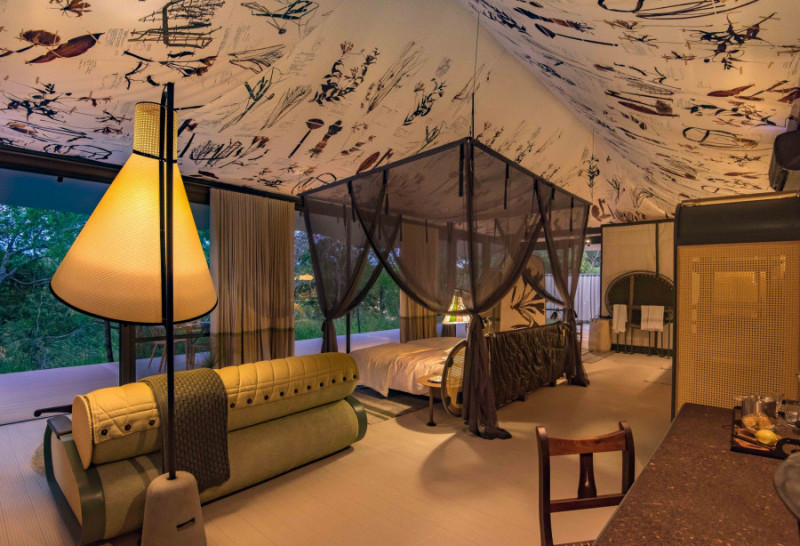 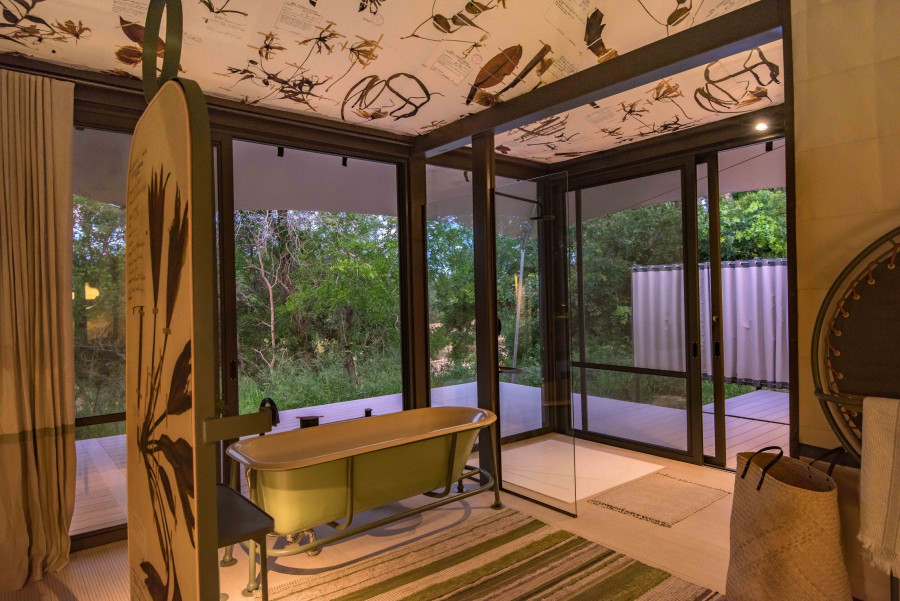 Part of their COVID preparedness is evident by how your luggage will be waiting for you outside the tent and you will be invited to break the seal that indicates your tent had been sprayed and deep-cleaned prior to arrival. Guests are also given the choice of cleaning and turndown once or twice a day to minimise the number and time of staff inside your tent during your stay and there are sanitising stations at every opportunity.

Although the tents, with what must be the most comfortable sun lounging beds at a private pool in the universe, are so comfortable and welcoming one hardly wants to leave but there is a special appeal to the public areas at Saseka – a vast open space with a special roof structure that dapples the light as if through the tops of a tree canopy. The designers have matched traditional South African “riempie” furniture where seats are supported by narrow animal skins strung in a lattice pattern and the type of 19th century South African ball-and-claw heavy timber tables with purpose-designed light fittings that appear more like wondrous flowers than a light source. 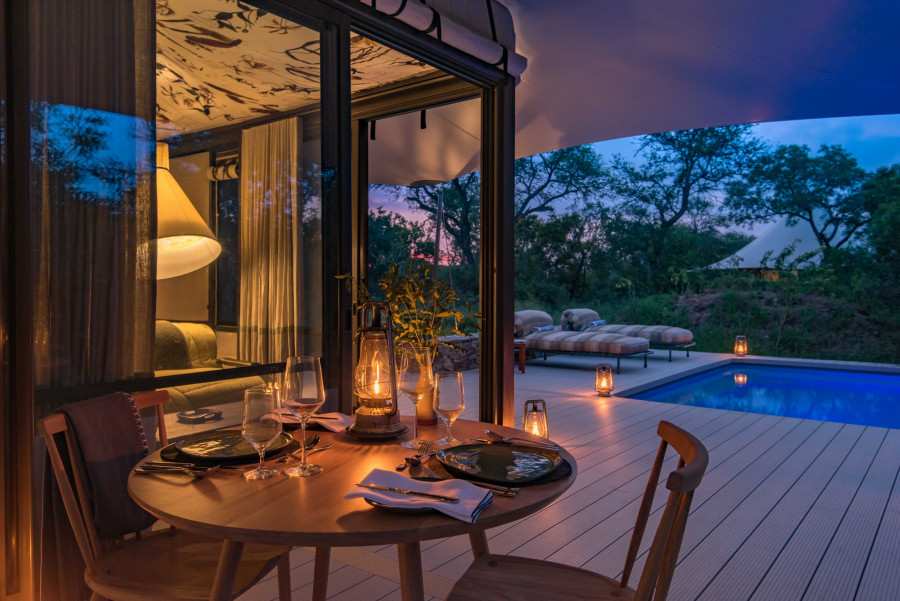 The genius in the design is how everything just works to increase one’s engagement with the surrounding bush. Take the desk area, in the tent, for example, which is clad in cork. No other material so evokes the texture and colour of the giant trees that surround the lodge and lean over the riverbed.

It took designers and builders a year to create Saseka and as a guest, you can see why. The attention to detail is evident in everything from the timber in the reclaimed railway sleepers that welcome us as we approach the main lodge to the water feature we step over as if hopping from stone to stone in the river.

In addition to the eight tents, the Leadwood Villa is a family unit that incorporates two tents with a central living and dining area and giant fire pit. Adjectives like unique and unparalleled are often overused but I venture that in this case they accurately describe the Saseka Tented Camp experience. 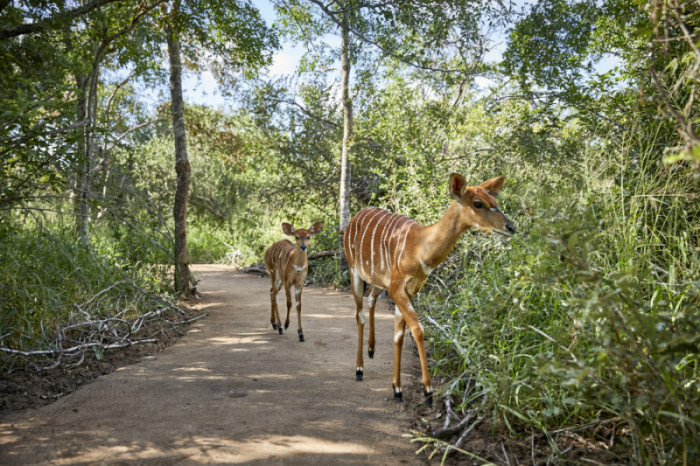 Of course, a visit to a game lodge is also about the game. The abundant big-five seem to focus around a she leopard named Saseka and from whom the lodge takes its name,  meaning beautiful in the local Tsonga language.

The mostly dry Monwana riverbed is like a highway for animals that want to miss the heavy growth areas along the banks. So, just looking down into the riverbed will thrill you with abundant antelope sightings not to mention the numerous elephants, Inyala, a mid-sized striped antelope and other antelope which often can be seen silently searching for food and water in the area. 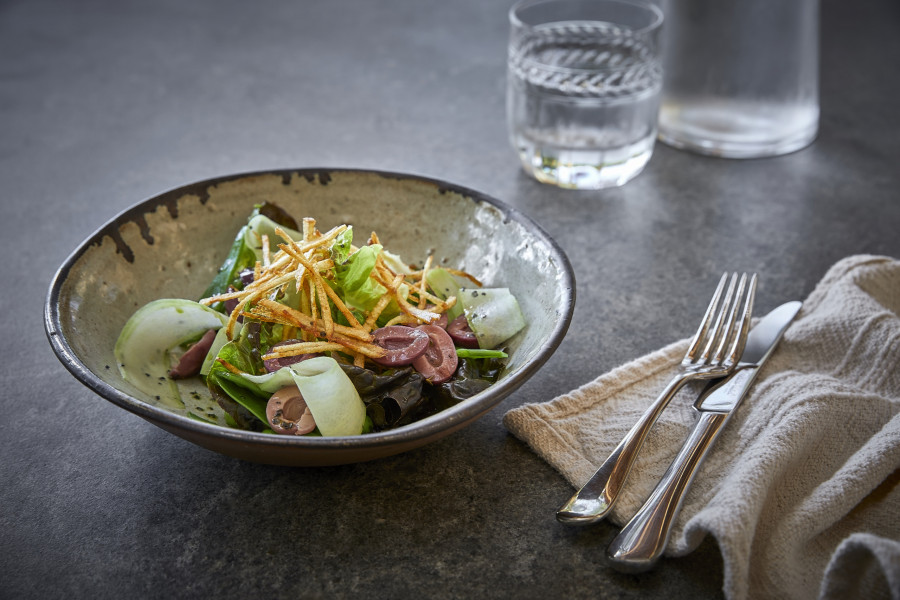 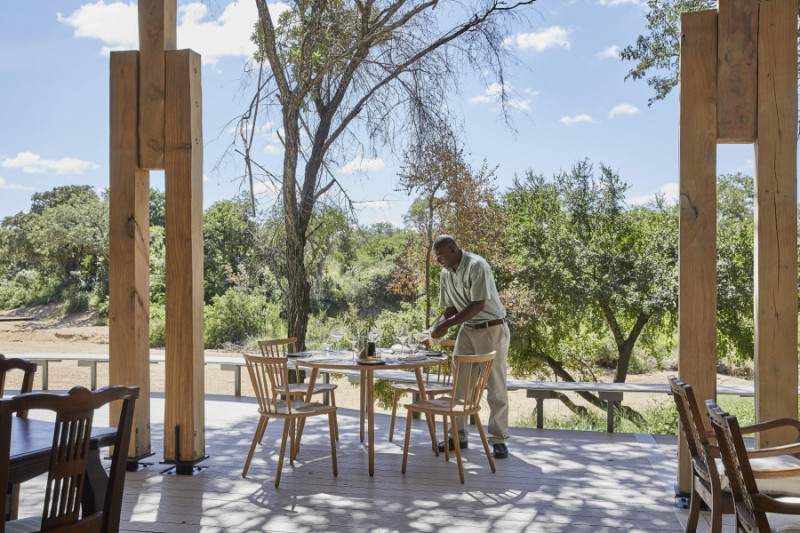 Field Guide, Ross Gariepy is one of the many senior guides at Thornybush and lead us in the bush during our stay. He is light-hearted in his approach with self-deprecating humour and good company as he navigates through the bush and translates what is happening around us. On our game drives, we saw such spectacular sightings such as lions feasting on a buffalo, an interaction between hyena and lions, giraffes necking to practice dominance, packs of wild dogs, faces still bloodied from a feast, antelope-like kudu and impala who jumped across the road just ahead of our game-drive vehicle and the reserve’s famous leopards.

The generosity of a buffet with many and varied items to try has been updated in a post-COVID world to grazing platters that are brought to your table for your exclusive use. The delicious cuisine will be long remembered.

Saseka Tented Camp is part of the Thornybush group of properties.

Located about five hours road trip from Johannesburg or a 45-minute flight to the nearby Eastgate Airport or by private charter right into the reserve. The nearest town is Hoedspruit.
Rates are from ZAR31610 or about £750 per room per night and include all meals, most beverages and two game drives a day.
E: book@thornybush.com