What’s in a name?  For James Cochran, head chef of 12:51, it tragically means not being able to use his own – greatly boosted in currency after winning BBC’s Great British Menu –  over the door of his latest venture, given the owners of his previous, eponymous, restaurant trademarked it for their own use.

Now the magic which saw Cochran named Champion of Champions for the 2018 GBM season is being dispensed from a small storefront restaurant strategically placed on Islington’s Upper Street near both the Almeida Theatre and Screen on the Green.

The restaurant is named for James’s favourite song by The Strokes; the disc itself finds a place on the wall of artwork of what is not so much a room as a corridor – the long. narrow ground floor is a game of two halves, with most tables in the back but a few choice options in the window, a service bar separating the two dining areas.  An upstairs dining-room shares a double-height window but with a front door opening to an uninviting set of stairs, does not seem integrated with the main restaurant.

The humble setting is perhaps intentional; despite his training in Michelin-starred establishments including the Ledbury, Cochran is no fan of pomp.  It’s a creative difference which caused him to quit the City restaurant where he previously oversaw the kitchen, claiming he was expected to put steak on the menu for an upmarket clientele when short rib with marrowbone preceded by one beautifully dressed oyster instead of six served on ice is clearly more his speed.   It ‘s a philosophy that makes culinary fireworks at his current address distinctly affordable. 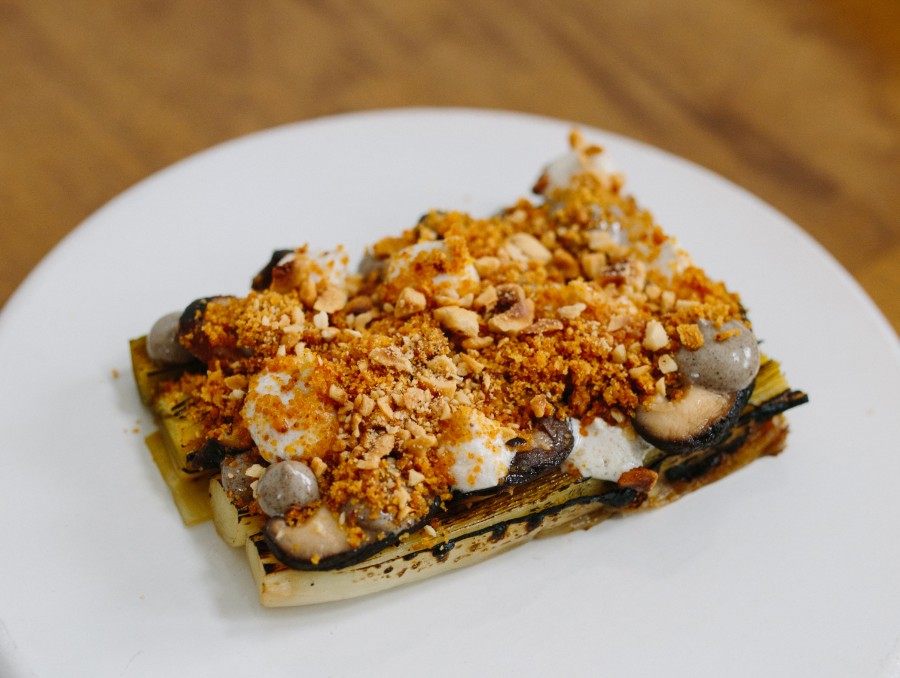 Ja, as friends call him, is a product of the West Indian mother who imbued him with a love of spice and foraging, a Scottish father who introduced him to his own culinary heritage and an upbringing in Whitstable, where Cochran took his first job at Wheeler’s Oyster Bar.  That history was reflected in the first thing we tasted – a rock oyster dribbled with buttermilk, a soupcon of horseradish and a top dressing of bright green dill oil, served on a dish of pebbles which could have come straight from the oyster’s home beach.

The next dish to arrive was the greatest taste sensation of the night – a shareably thick slice of soda bread with a mound of scrumptious smoked pork butter topped with shards of finely-sliced crackling.  Both these items are billed as Snacks – a bite to enjoy with cocktails – to be followed by a couple of small plates to share, with larger ones for heartier appetites.

From the first section a dish of barbecued leeks, judiciously truffled and treated to a top coat of grated egg yolk, hazelnuts and shiitake mushrooms was the standout dish.   Both the meaty mains were exemplary- short rib of Dexter beef with wild garlic, salsify, bone marrow and that wonderful sea vegetable oyster leaf, which tastes bizarrely just like the bivalve – and a mint-infused haunch of roast lamb dressed with sheep’s curd, a sprinkle of almonds and a few hemispheres of sweet, oven-baked Roscoff onion. 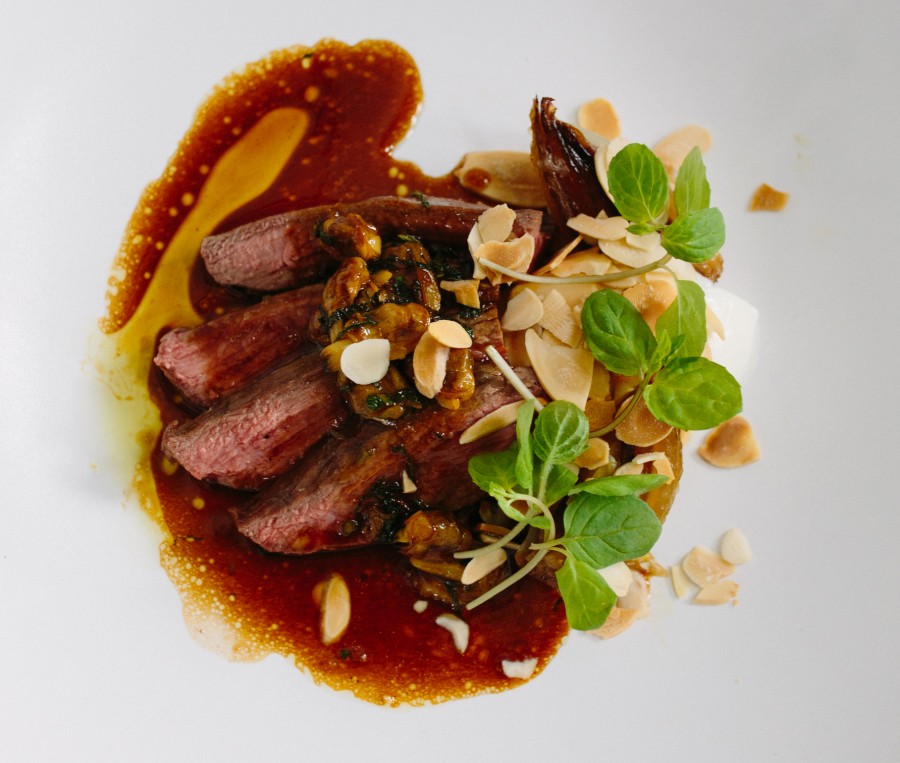 Only a trencherman could tackle the banana, yoghurt and peanut Knickerbocker Glory which has been a stalwart of the dessert menu; we found the custard tart with hibiscus and honey ice-cream thankfully light; it slipped down our gullets as a sweet, digestible ending to a memorable meal.

What to drink with that lot, apart from inventive cocktails which at £10 compare favourably with West End prices?  The wine list is as inspired as the food and we found a full-bodied Uruguayan rose stood up perfectly to every course without swamping the delicate oyster or fighting with the truffle.   As for food pricing, a new £35 five-course BYO tasting menu served on Mondays and Tuesdays allows affordable exposure to a whole variety of Cochran’s bells and whistles.   Even ordering off the menu, where Snacks are all attractively priced below £5, Small Plates creep into two figures, mains crash the £20 barrier and desserts cost a pricey £10, the non-greedy can get out for a shade below £100 for two.

Worth noting – the exceptionally knowledgeable and friendly servers, and the fact the restaurant chooses not to publish a phone number.  Bookings can be made online and are strongly recommended while Cochran’s star remains in the ascendant.

Tell me more about 12:51 Restaurant